It’s a cold night in 1998, the type Edinburgh specialises in, when the frigid air seems to work its way into the very marrow of your bones. A homeless man seeks shelter for the night. He finds himself in Greyfriars Kirkyard.

A-ha! Look! There’s a building up ahead! The man tries the door but it’s locked. But wait, what’s that? He finds a hole near the back of the mausoleum. Who knows what it’s for—and least it’ll get him inside and under a roof. He slips inside and finds himself in the mausoleum.

A staircase takes him down to the crypt. He finds the coffins of the Mackenzie family. Perhaps there are valuables in the caskets… 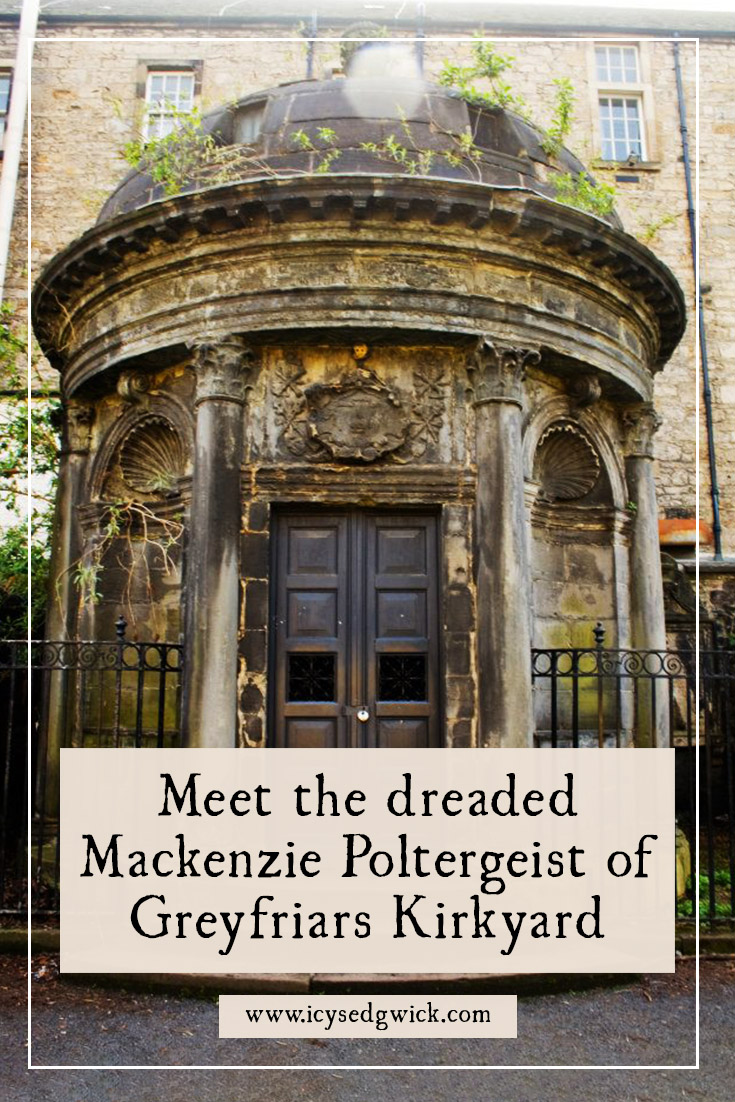 Before he can find out, a hole opens in the floor. He drops into a chamber below, filled with centuries-old bones. Panic-stricken in the dark, the man somehow manages to clamber out of the burial pit. The legend tells that he flees the mausoleum in fright, encountering a local dog walker in the process.

Except it isn’t just the homeless man who leaves the mausoleum that night. According to the stories, one of Edinburgh’s most vicious poltergeists begins to walk abroad as well…

So who WAS George Mackenzie?

He was also known as ‘Bloody Mackenzie’, and he was a judge and Lord Advocate in the 17th century. But before we can go into who he was, we need a little backstory…

Religious Reforms Cause Problems For A King

It still wasn’t resolved by the time King Charles I came to the throne in 1624. Thanks to his fervent belief in the Divine Right of Kings, he ignored the wishes of the Scottish Church. He introduced the Common Book of Prayer in 1637 and outlawed other forms of worship.

This understandably led to riots and protests in Scotland. Charles branded anyone opposing the Prayer Book as a traitor. His opponents decided to create a National Covenant so that it was Scotland opposing Charles, not individuals.

It was signed on February 28, 1638, and those who signed it became known as the Covenanters. This declared their pledge that Scotland was loyal to the King, but it would remain a Presbyterian country. The Covenant was even sanctioned by the Scottish Parliament in 1640. The First English Civil War began two years later, and the Covenanters supported the parliamentarians to depose Charles.

Mackenzie actually began his career defending Covenanters, and even got the Marquis of Argyll acquitted from a charge of treason (Sheldon 2018). But he’d only taken on these defence cases to make his name. Once established, he switched sides, defending the King and the Scottish church. This support paid off since he became King’s Advocate for King Charles II in Scotland in 1677.

He persecuted the Covenanters, who were now outlaws. After the Battle of Bothwell Bridge in 1679, Mackenzie imprisoned 1,200 of them in Greyfriars Kirkyard, in the area now known as the Covenanter’s Prison.

At the time, it was an open area at the southern end of the kirkyard, enclosed by the town wall. They were left in this outdoor area without food, water, or shelter, and hundreds died. Guards mistreated them, and their heads ended up on spikes along the gate. By the end of 1679, only 48 Covenanters remained.

Mackenzie actually fell foul of his own enthusiasm when William of Orange came to the throne. He gave religious control back to the Presbyterians—the group Mackenzie persecuted with such relish. Mackenzie fled Scotland for England, where he died in 1691 (Sheldon 2018). In a twist of irony, he was buried in Greyfriars, a mere stone’s throw from the Covenanter’s Prison.

A couple of centuries ago, John Hayes, a failed criminal, apparently hid from the law in the Black Mausoleum. He spent six months there, sneaking out to scavenge whenever possible. When the police finally caught him, he’d gone mad. He insisted that the coffins in the mausoleum moved every night. Apparently, he could hear Mackenzie scraping around inside his coffin (Forde 2012).

And a homeless man wasn’t the only person to end up in the mausoleum more recently. On June 30, 2003, two teenagers forced open the doors and desecrated an unidentified male corpse. One of them cut off its head and used it like a glove puppet. If you believe the reports that grew up around the story, they supposedly drank wine from the skull.

The boys, who were 15 and 17, caused around £10,000 worth of damage (Scott 2004). A ghost tour guide challenged the boys “after seeing them carrying something in a blanket” (Scott 2004). The guide caught the police, who caught one of the boys who returned to the graveyard with a girl who didn’t believe him.

Authorities tried both boys under the ‘violation of sepulcher’ law, originally designed for grave-robbing.

The mausoleum became infamous after these two events. The doors remain locked, even now. I went right up to them on a trip to Edinburgh in 2012. It was during the day (though some experiences have also been daytime encounters) and nothing happened, but that means nothing!

Since 1999, at least 140 people have collapsed (Henderson, no date). 350 documented attacks are on record. Within a week of the homeless man’s incursion into the tomb, a woman felt herself blown back from the mausoleum by an icy blast of air (Edwards 2014). Jan-Andrew Henderson even started the City of the Dead Tour company to both investigate the sightings and speak to witnesses.

The tour takes in the whole of Greyfriars Kirkyard, including the normally-locked Covenanter’s Prison.

Visitors record both hot and cold spots, inexplicable bruises, scratches, or being pushed by an unseen presence. They report having hair pulled or their limbs being grabbed. One woman was found unconscious nearby, with bruises around her neck (Edwards 2014).

Some people have claimed that an evil presence has followed them home to continue tormenting them elsewhere (Ball 2020). The spiritualist medium Colin Grant attempted to lay ghosts to rest in the kirkyard in 2000. A few weeks later, he died of a heart attack (Ball 2020). Many attribute this to the Mackenzie Poltergeist.

Dead animals turn up near the mausoleum, with no obvious cause of death. People see white figures and hear knocking noises from beneath the ground.

Strange fires break out in the houses surrounding the kirkyard, including that of Henderson who lost his physical notes about the poltergeist in a house fire. Luckily, he had a digital backup elsewhere (Henderson, no date). These notes led to his book about the phenomena, The Ghost That Haunted Itself.

Tales of strange sightings in the kirkyard itself abound. Figures flit between headstones, while spectral white birds make an appearance (Forde 2012). Yet it’s difficult to link these manifestations with a poltergeist. There is even a theory that the poltergeist is also responsible for paranormal activity in the South Bridge Vaults (Forde 2012). But again, this seems a difficult link to make.

So how do we explain the lack of stories about hauntings before 1998? One theory is that Mackenzie lay dormant until disturbed by the homeless man. Now awake (and presumably none too pleased about that fact), he haunts his mausoleum and the surrounding area.

Surprisingly, records do show that in the nineteenth century, local children believed Mackenzie was restless in his tomb. They’d run up to the mausoleum at night, and yell “Bluidy Mackenzie, come out if ye daur, Lift the Sneck and draw the bar!” through the keyhole (Sheldon 2018). And remember the criminal who hid in the mausoleum, insisting Mackenzie still moved around in his coffin. So there is some precedent to the idea of the Mackenzie Poltergeist, well before 1999.

Willie Telford, a tour guide in the area, thinks that Mackenzie lurks in the area due to his conscience. Perhaps he feels remorse for his treatment of the Covenanters (Edwards 2014). This could certainly explain why activity seems to centre around a tomb in the Covenanter’s Prison, not the Mackenzie Mausoleum.

Another theory involves the hysterical energy on the night in 1998, which has been fed by visitors to the site. In this explanation, the continuing hysteria keeps the manifestation going (Sheldon 2018).

When I did a City of the Dead tour in December 2016, the tour guide offered pheromones as an example. Say you gather a party of already anxious people into a confined space, like the Covenanter’s Prison. The pheromones excreted by this group can influence each other, thus spreading ‘mass panic’.

Others think that the pheromones released by those imprisoned in the Covenanter’s Prison have somehow imprinted on the area. Every time visitors swing by for a tour, the pheromones reactivate, and we experience poltergeist activity (Forde 2012). My problem with this idea is that I’m not sure you could reactivate them after 300 years. Not to mention the fact that the disturbed grave was several yards away!

What do we make of the Mackenzie Poltergeist?

Different theories attempt to explain the Mackenzie Poltergeist. Mass hysteria, pheromones, overactive imaginations, electromagnetic radiation from nearby machinery, and even geology all play a role. Any of these explanations—of all of them—could be correct.

That said, it’s difficult to argue with the sheer volume of reports in a relatively short time period. Furthermore, given the number of reports that involve physical assaults, it’s hard to work out how geology could cause scratches to erupt on a person’s body.

And of course, there is another possibility. Perhaps the Mackenzie Poltergeist really does roam the grounds of Greyfriars Kirkyard…

What do you think? Have you ever encountered it? Let me know below!

Forde, M.B. (2012), ‘The terror of the MacKenzie Poltergeist’, The Spooky Isles, https://www.spookyisles.com/bluidy-george-mackenzie/.

Henderson, Jan-Andrew (no date), ‘The Mackenzie Poltergeist’, City of the Dead Tours, https://www.cityofthedeadtours.com/the-mackenzie-poltergeist.html.