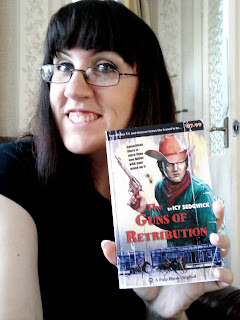 I’ve been whoring myself about a bit of late to promote The Guns of Retribution, which I’m now pleased to hold in my hands as a paperback! I’m going to be having a launch party in Newcastle upon Tyne once I’ve finalised things with the venue, so if you’re in the North East in early October, then hopefully you’ll be able to come along!

In the meantime, I’ve done interviews with the lovely Jen Brubacher and word wizard Tony Noland. I’ve also managed to snaffle three reviews of the book by Helen Howell, Paul D Brazill, and Pulp Serenade. Hopefully they’ll persuade you to check it out. I’ve also got a post up over on Write Anything about writing genre – which is kind of apt when you’ve done a Western.

In other news, I’m currently working on an outline for the sequel. Grey O’Donnell is a character I’m really enjoying working with, and there are plenty more adventures for him to have – especially when things take a supernatural turn. He won’t be putting away his Colt just yet!

I’m also working on a story for the Bloody Parchment competition. The deadline is Halloween, and the first prize is one round of professional editing of a novella or novel-length work, while the top thirteen finalists will see their work collected in an anthology. So if you have a piece of dark fiction less than 3,500 words, get entering!