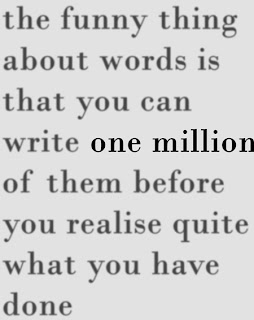 Just before New Year, I had one of “those” conversations on Twitter which led to the formation of an idea, and the proposal of a challenge. Brian Knight, otherwise known as @TheNewAuthor, challenged me to write one million words by the end of 2011. For the mathematical fetishists among you, that works out at 83,334 words per month, 19,230 words per week, or 2740 words per day. Ouch.

It’s now 16th February, and I’ve written a grand total of 81,274 words. That’s more than I would have imagined I would have written by this point in the year, although I’m still off the target by some margin (over 48,000 words – some margin, I think you’ll agree). Even more annoyingly, that would be a decent-sized novel if I’d stuck to writing just plain fiction to eat up the word count, but I didn’t. Rather, that figure is made up of;

Who would have thought I’d write so much? I certainly didn’t. OK, so it’s not as much as I would have liked to have written at this point, but having a goal like “write one million words in 365 days” is one hell of a motivator.

Someone asked me the other day what motivates me. I was somewhat flummoxed as I’ve never really considered myself to be a motivated person (I don’t even list it as one of those generic, catch-all buzzwords you find on CVs). I just do what I do because I want to do it – I’ve never stopped to analyse the reasoning behind it. I guess “It seemed like a good idea at the time” or “I’m getting paid to do it” is my usual rationale. However, in the case of writing, this line of reasoning falls flat.

In putting pen to paper, I guess my biggest motivation is the act itself. I enjoy writing, and I enjoy telling stories – I always have done. It doesn’t occur to me NOT to write. So why wouldn’t I want to do something that I enjoy? Of course, one might ask, if one were so inclined, why I then feel compelled to share them with the world, and I, being cheeky, would no doubt reply “Because I can”. In all seriousness, I put my stories up here, or submit them to anthologies, or make them available as ebooks because I want to other people to enjoy them. I know how mundane and dull existence can be, and if I can lift someone out of that for a while, even a few minutes, then I consider that a job well done. Besides, humans rationalise their world through stories, be it our personal narratives in the form of our memories, or how we connect facts in order to communicate events to one another. Sharing fictional stories is a nice way to connnect with fellow humans.

When it comes to a solitary pursuit such as writing, you need some kind of emotional motivation. Sure, the fear of missing a deadline can spur you on as you slap down sentence after sentence, and I’m sure writing because you’re paid to do so also ensures you churn out thousands of words a day. However, I still think there’s nothing quite like writing for the simple joy of doing so, when the imagination becomes so vocal in speaking its mind that you can’t do anything but write.

Enjoy what I do and provide some escapism? Yeah, that’s why I’m a writer.