Divination has become a popular pastime in recent years. Runes, cards, and dowsing are all options you might see over on Instagram. Brigit Esselmont at Biddy Tarot even brought out a handbag-sized tarot deck for readings on the go.

If you visit your local metaphysical shop or bookstore for tarot cards, you might see oracle cards too. I’ve had a few people ask me what the difference is, so that’s what we’re looking at today. 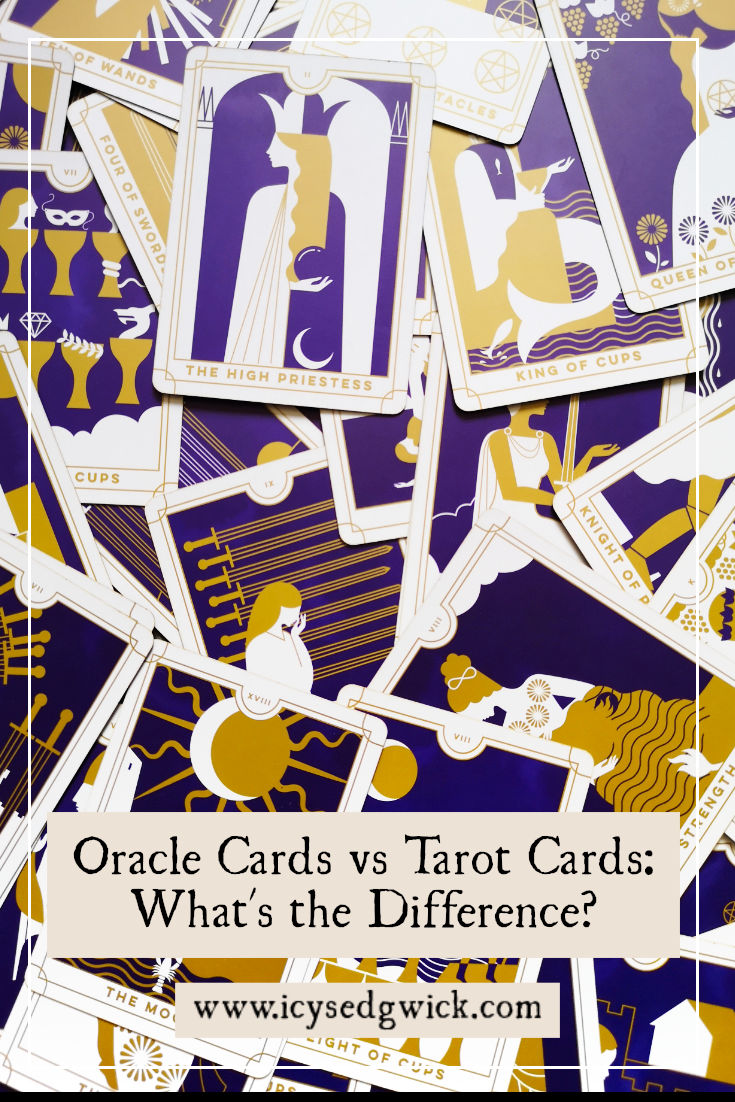 Is one ‘better’ than the other? Or do they each suit different circumstances or readings? Let’s check out the differences in the Oracle Cards vs Tarot Cards debate!

What are tarot cards?

Some people claim tarot cards enjoy a mysterious lineage all the way back to ancient Egypt. In this ‘theory’, tarot cards are all that remains of the Library of Alexandria.

There’s no evidence to support this as I explain in this article about tarot cards for FolkloreThursday.com. Instead, tarot cards largely derive from playing cards. Playing cards have the four suits, from Ace to Ten, plus the three court cards (Jack, Queen King). Tarot cards have a similar system called the Minor Arcana. Here, each of the four suits runs from Ace to Ten, with four court cards (Page, Knight, Queen, King).

What sets tarot cards apart is the Major Arcana. These are the 22 ‘picture’ cards that run from the Fool (card 0) through to the World (card 21).

There are various theories to explain where they came from. But they were largely used as ‘trump’ cards in tarocchi, a card game similar to modern bridge. They gained their esoteric meanings in the 1780s, which they’ve kept ever since.

Each deck represents the cards differently but meanings are largely the same across each deck. This is the Hermit, one of my favourite of the Major Arcana, across a range of my decks.

The cards largely mean the same thing, although you can infer some differences due to the artwork. For example, the Hermit in the Housewives’ Tarot on the far right places more emphasis on self-care and ‘treating’ yourself. Whereas the cards from the Dragon Tarot (far left) and Influence of the Angels deck (second from the right) focus on the idea of solitude, lone searching, and holding up the lamp.

You will get some deviations – for example, the Druid Craft Tarot doesn’t have a Devil or a Judgment card, since neither of them is a Druid concept. Instead, you’ll find Cernunnos and Rebirth, which largely mean the same thing (but not quite). The deck also replaces the Pages with Princesses, and the Knights with Princes. There are also some deviations between types of tarot, but you can still figure your way through.

You can pretty much pick up any deck of tarot cards and do a reading if you know what the cards mean. Deviations and all.

What are oracle cards?

Oracle cards work slightly differently. You still ask a question, shuffle, and draw a card. But each deck is different because the cards and meanings depend on the deck’s author.

You do get themed tarot decks but themed oracle decks are more ‘obvious’. The theme is central to what the cards actually mean. For example, the Druid Plant Oracle features plants familiar to the druids on each card.

So I asked the question, ‘What do I need to know to have a good day?’ These are the cards I drew from just some of my decks.

The Druid Plant Oracle (left) gave me Woad. Its keywords are freedom, bardistry, and warriorhood. The card suggests a need to express your creativity to find freedom. Use the single-mindedness of the warrior to stay focused on your goals, not those of others.

The Enchanted Spell Oracle (top centre) gave me the Fertility card, which can mean pregnancy, starting a new project, or following fertile imaginings. So, creativity again!

The Divine Circus Oracle (bottom centre) gave me card 41, Lady Luck. She’s all about accepting fortuitous circumstances, and making your own luck.

The Starseed Oracle (top right) gave me the card Jump In: Andromedan energy, adventure, say yes to change. This card is all about going with the flow, jumping in headfirst without waiting for permission, and start an adventure.

The Commonplace Oracle (bottom right) gave me the Eye. This is about being watchful, trusting your instincts, following your intuition, and ‘seeing is believing’.

They each give different messages, but weirdly, there’s still a commonality between them!

Point is, if you get a new deck of oracle cards, you need to learn a new set of meanings for each deck. Unless you read intuitively and take messages from the imagery of the card itself.

But even if you do this, you’ll get a different set of meanings every time. Yes, you get slightly different meanings with tarot. And they do vary depending on the position they’re in. But you can still work across several decks and get a similar gist. Not so with oracle cards.

You use both sets of cards in a similar way. You can:

Essentially, the big difference comes from the meanings. With tarot, you learn the meanings and apply that to different decks. It’s more of a structured system with ‘rules’ and ‘grammar’.

Oracle cards require you to use each deck according to its own merit.

Each card becomes a literal oracle every time you do a reading. Both types of cards rely on synchronicity, or the belief that you’ll get the exact message you need at the time you need it.

Yet oracle cards take this one step further because of the variation across readings and decks. Especially if you feel drawn to use a particular deck at a particular time.

Think of them like the Oracle of Delphi, issuing specific messages for the intended listener.

Neither type of card is better than the other. I like tarot because I enjoy its system and structure. But sometimes oracle cards are more flexible and give more targeted advice through their keywords.

If you want to learn more about tarot, I recommend the Between the Worlds podcast with Amanda Yates Garcia. Or check out @rootlocktarot and @venusinretrotarot on Instagram. And Gina Spriggs does an excellent course on Intuitive Tarot over on Daily Om.

If you prefer the sound of oracle cards, check out Colette Baron-Reid‘s website. You can use digital versions of her decks to see what they’re like. I also recommend Jen Blumenthal.

And if you’re interested in oracle cards and folklore? Sign up below for updates about the Folklore of Everyday Objects oracle deck that I’m putting together! You’ll also get my 6-step guide to getting the most out of a card reading.