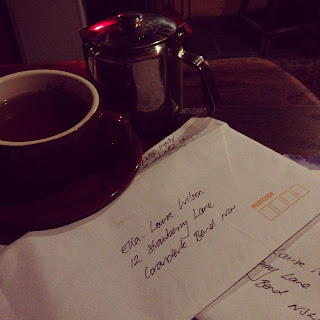 I love playing host to other writers here at the Blunt Pencil, and today I’m throwing open the doors to an ambitious antipodean pair, Jodi Cleghorn and Adam Byatt. The duo are aiming to resurrect the art of letter writing through serial fiction, but I’ll let them explain the project! “Post Marked: Piper’s Reach is an ambitious organic narrative collaborative project between Jodi Cleghorn and Adam Byatt traversing an odd path between old and new forms of communication, differing modalities of storytelling and mixed media, all played out in real and suspended time.”

In December 1992 Ella-Louise Wilson boarded the Greyhound Coach for Sydney leaving behind the small coastal town of Piper’s Reach and her best friend and soulmate, Jude Smith. After twenty years of silence, a letter arrives at Piper’s Reach reopening wounds that never really healed. When the past reaches into the future, is it worth risking a second chance?

So what do Jodi and Adam have to say for themselves?

1) How do you resist the urge to fill in backstory by having characters remind each other of things they already know?
(JC) In short we don’t! The two decades silence serve as permission for them to remind each other of things… some remembered, some forgotten (like who hurled down Jude’s back at the after formal party: Bart or Paul?) They retell their time together as a deconstruction of the past, sharing how they felt and thought about different events, revealing the side of their relationship they kept hidden from each other at the time. On one hand they are prompting, but it is juxtaposed with things never known.

(AB) A letter is perhaps the one form where backstory is integral to understanding the characters, their relationship and their current situation. The events of the past inform the present. As the characters replay significant events from their past, they focus on their perspective of that moment. The reader is able to understand each character’s perspective and point of view, what they focused on and why it is important to them, in the past and present.

2) Do you miss dialogue when writing fiction as letters?
(JC) Letters are really a delayed, one-sided conversation, so my inner dialogue addict hasn’t gone into withdrawals. I still hear the voices in my head—I hear Ella-Louise talking with her friends Ava and Matt (and their daughter Ellie). The voices thing only happened recently for this project and it’s more to do with Ella-Louise trying to sort out her feelings, about what she should say, and do and think about Jude in 2012. Ella-Louise’s ‘voice’ in my head is, more often than not, couched in the one-way communication of the letters, rather than an actual conversation.

(AB) As Jodi said, a letter is a one sided conversation. Dialogue allows for tics, idiosyncrasies and favourite expressions to be developed in the character. A letter is a concentrated version of a character’s idiosyncrasies. When writing Jude’s letters, I hear how he speaks and translate it to paper. He has a poetic feel to his writing and a letter allows it to speak through his recollections and how he remembers and reimagines the past.

(JC) There are tiny snippets of dialogue inserted – but it’s as narration of what is being said around the characters and how it makes the characters feel. It would stand out as appallingly contrived in a normal short story/novel, but I think it’s used sparingly and to good effect in both our letters.

3) The rise of e-mail has largely done away with writing letters. Do you agree this is a shame, since families can hardly pass on emails etc. to the next generation?
(AB) I have a foot firmly entrenched in both camps of the digital and the analogue. I love the immediacy of email, facebook and twitter; I can skype with my sister who lives in America. I can have conversations with people in via different web media in real time or over a couple of hours or even days.

(JC) All my old friends and I lament the digital age and the fall from grace of letter writing. While we love being able to see what each other is doing on Facebook, have instant access to photos, status updates and to comment on them… we miss receiving a letter: of making a cuppa, finding somewhere comfy to sit and escaping from life for a bit and of the mindfulness involved in finding paper, pen and the time to sit and write. We do still write though it tends to be a treat for birthdays and the occasional handwritten Christmas missive.

(AB) A letter requires thought, time and preparation. An email is quick and convenient. You can spend time on an email, but its impermanence doesn’t endow it with long-term meaning. We have traded connection for convenience; the private for the public. We need to learn, and to teach, how to find the personal space and personal connection again.

4) Who was the last person you wrote to?
(JC) Ironically, Adam. And no, I’m not talking the scribbled post it note on the back of one of Ella-Louise’s letters. I was home sick a fortnight ago and was reading an essay on loss in the age of hyperconnectivity, which was followed by an intense discussion about connection/disconnection, quiet spaces. And running on the fuel of a pretty wicked fever, I had this moment of fearing I was dissolving into the page as Ella-Louise. My first and greatest love, letter writing, was being consumed by a fictional character.

So I sat and wrote a letter as me, then stressed for two days about having sent it because I had transgressed out of one intimate space and into another. Which is actually quite daft! I think we need to spend more time in these intimate spaces–with ourselves firstly, and then with others in the intense and private spaces afforded by letters.

(AB) I do not know who I last wrote to. It’s quite embarrassing to think I haven’t written someone a letter for such a long time. I leave notes for my wife from time to time, but she was probably the last person I actually wrote a letter to. I have recently seen a number of blogs advocating projects focused on letter writing. It’s a wonderful example of the immediacy of the digital age allowing a reconnection with the beauty and intimacy of the past.

Thanks to Jodi and Adam for stopping by.  You can find out more about the project here and meet the authors here. Follow the blog tour schedule at http://postmarkedpipersreach.wordpress.com.