One of the things I love about running this blog is taking requests for posts. I got one a few weeks back about the folklore of water. The more I delved into it, the more I realised there was too much for a single post. So we’re splitting things into categories. We’ll look at river folklore this week and lakes next week. 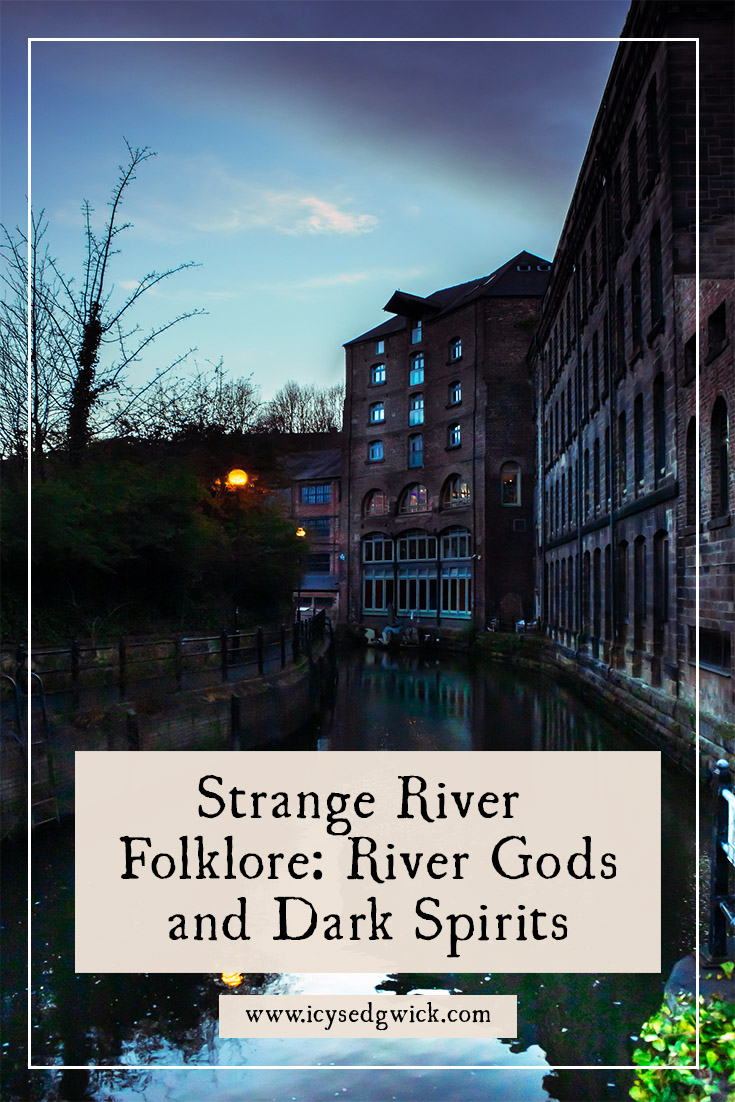 But there’s a lot more to river folklore than Greek mythology! So let’s focus on the deities, dark spirits, and superstitions of these rivers, shall we? Hit ‘play’ to listen to the podcast episode, or keep reading!

I’ve talked about genius loci and their connection to rivers before, notably in the form of the River God Tyne and the Rivers of London series of books.

Rivers often become associated with patron deities. In Bath, the Celtic peoples worshipped Sulis at the thermal spring. When the Romans arrived, they equated Sulis with one of their own goddesses to create Sulis Minerva. Martin Henig suggests the Romano-British used the two names interchangeably (1995: 27). Minerva was never a water goddess, so some scholars think she supplied the healing side of things.

Archaeologists found 130 lead curse tablets in the Roman baths’ sacred spring. They’re addressed to Sulis and usually request punishment of a thief (Romanbaths.co.uk 2014). This is unsurprising since clothes or money might be stolen while people were bathing. The fact that those issuing the curses asked Sulis to enact punishment in the temple set up “a strong sense of place” between the petitioners and the goddess (Revell 2007: 221).

Coventina was another Romano-British goddess, this time of rivers, springs and wells. We know little about her, other than the fact she was a local British goddess. She was important enough for the Romans to adopt her too—representations of her show a Roman artistic influence. Scholars believe her to have been seen as the supreme river goddess, associated with the Caldew River (The White Goddess 2021).

The late Eric W Edwards describes her as a “patroness of healing waters and wells” (2014). He also notes her Celtic origins, and the fact the Romans picked up her worship. Inscriptions to her have been found at Coventina’s Well at Carrawburgh along Hadrian’s Wall. Brooches, coins, pottery, and rings have been found as votive offerings to her. Coventina marks the intersection of water and healing, although other, darker spirits hint at the destructive powers of water.

Goddess of the Seine

We see such water deities elsewhere in Europe, too. Sequana was the Celtic goddess of a healing spring near Dijon. This spring is also the source of the mighty Seine. Archaeologists uncovered the remains of a temple near the spring, including a bronze statue of Sequana (Deyts 1971: 65). Simone-Antoinette Deyts calls her “the divine personification of the Seine” (1971: 66).

Around 1000 votive offerings of bronze and stone were found at her temple, and they most commonly represent the body part in need of healing. Other, more general effigies show the devotee holding an offering, such as fruit, a dog, or a purse of money (Deyts 1971: 69). These show a sense of general devotion to Sequana, alongside the requests for healing.

The Tees isn’t the only river that’s home to a vengeful spirit. As we saw in our jaunt around Sheffield folklore, the Steel City claims dark water gods lurk in the Don. People feared their wrath if they didn’t cast in sacrifices. Even pop band Pulp threw coins into the churning waters to appease the gods (Petridis 2012).

He further notes that the 19th-century historian Joseph Hunter thought the rhyme may have referred to sacrifices made to the water gods (2012). Clarke explains that the ancients considered rivers to be female, and he notes the belief that the Don was named for Danu, a Celtic mother goddess (2017).

This seems to be a common theme in the rivers of Britain. The Ure in Yorkshire and the Dart in Devon also demanded a life every year. The Reader’s Digest guide to British folklore suggests this may be a throwback to ancient tales of human sacrifices (1973: 31). There’s even a rhyme that accompanies the Devon version:

Every year thou claimest a heart

Tim Sandles makes the point that the River Dart can end up swollen, and if it coincides with a north westerly wind, the river seems to cry. People think the river spirit cries when it claims its annual life (2016). Given the fact that the river is at its most dangerous when it’s in full force, you can see why people might attribute that to a vengeful spirit.

Sandles even relates a tale from 1933, in which a Dartmoor author named Beatrice Chase heard the cry after attending a birth nearby. While the baby at first appeared healthy, people continued to hear the cry for three days. The cry only stopped when the baby died. Sandles notes that the weather was apparently fine, which rules out atmospheric causes for the cry (2016). Was it just a coincidence? He also notes that three weeks earlier, a man taking photos by the river narrowly avoided being swept away. Sandles wonders if the river compensated for this loss with the baby.

Scotland also has the shellycoat, a creature that wears a coat of shells. They haunt rivers and streams, and most think they’re mischievous rather than malicious. They might throw their voice as the cry of a drowning person. And we’ve talked before about both kelpies and the Bean Nighe, both supernatural creatures you might encounter along Scottish waterways.

Henderson also describes Peg as “a sort of Lorelei” (1879: 265). A lorelei is a female water nymph. A large rock formation on the River Rhine in Germany shares the name.

As the legend goes, Lorelei enjoyed sitting on the rock, luring skippers to row their boats too close with her beautiful singing voice. A Christian monk named Goar moved into the area and set about converting the pagan locals. One of them told him about Lorelei. So when he found a naked woman sitting in his favourite fishing spot, he knew exactly who he was dealing with. When she wouldn’t stop beckoning him towards her, he banished her with “powerful language” (Hollerbach 2007: 44). Having vanquished the temptress, he found converting locals much easier!

The name was immortalised in ballad form in 1801 by Clemens Brentano. In it, a beautiful woman named Lore Lay lived in the area. Her lover betrays her by accusing her of bewitching men with her beautiful singing voice.

The local bishop sends her to a nunnery instead of ordering her execution. She asks to climb the rock on her way to the nunnery but falls to her death into the Rhine. I think I prefer the water nymph version!

People told many of these stories to keep vulnerable members of the community away from deep water. That’s even an issue today when many people can swim. Underwater currents, or extremely cold water, can both make otherwise tempting rivers dangerous places

Of course, it’s not just spirits that live in rivers. Other lore surrounds the waters that could sustain a community or steal away life.

If that doesn’t work, send a drummer out onto the river in a rowboat. The drum would apparently stop making a sound when it was above the body (Reader’s Digest 1973: 31).

It was thought unlucky to part company with someone near a stream (Reader’s Digest 1973: 33). Though if you’re trying to get away from supernatural creatures, crossing running water is usually a good way to leave them behind. They can’t cross it too.

Henderson, William (1879), Notes on the folk-lore of the northern counties of England and the borders, London: Pub. for the Folk-lore Society by W. Satchell, Peyton and co.