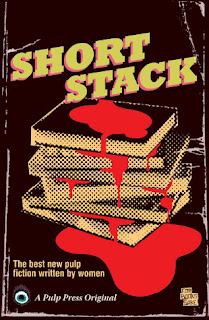 I’m pleased to announce that I have a short story in a brand new anthology! I submitted One Woman Cure as part of a joint competition between For Books Sake and Pulp Press last year (many thanks to Adam Byatt, Maria Kelly and Michael Shean for their beta reading input) and the anthology, named Short Stack, is available NOW for Kindle!

One Woman Cure appears alongside nine other stories by top female writers in an anthology dedicated to pulp fiction written by women, and about women. My own protagonist, Artemis Hyde, is a gutsy assassin hell-bent on revenge in a shadowy steampunk-esque world. I’m really proud of the story and who knows, if Short Stack does well, there may be more Artemis Hyde adventures in future.

The other stories are absolutely ace, and I’m pleased to be placed in the anthology alongside Bernadette Russell, Evangeline Jennings, Mihaela Nicolescu, Jane Osis, Gill Shutt, Claire Rowland, Shelagh M. Rowan-Lee, Zoe Lambert and Donna Moore. There will also be an event at the Deptford Lounge for International Women’s Day on 8 March – I can’t make it, but authors Bernadette Russell and Shelagh M. Rowan-Legg will be there, along with Jane Bradley of For Books’ Sake and Danny Bowman of Pulp Press. More details here.

I hope you’ll check it out, not just for my story but also for the others, and if you like it, leave us a good review! Support lady writers!