I was down in London for a swift break at the weekend, and as I found myself in the City late on Friday, I figured I’d take a short detour via Leadenhall Market to take some more photos. It’s a magnificent structure and I sometimes feel like it’s one of those places you’d walk past if you didn’t know it was there. 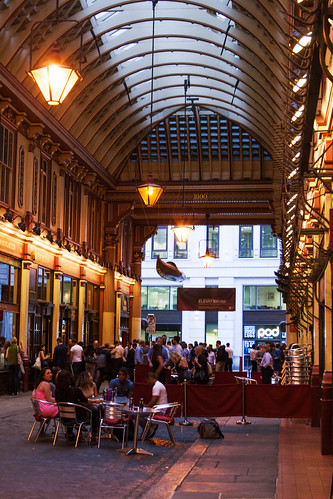 The market can be found behind Gracechurch Street, and it was originally a game, poultry and meat market in what was Roman London. Back in the fourteenth century, the site was actually a manor, belonging to Sir Hugh Neville, but the surrounding area became a meeting place for poulterers. Leadenhall was gifted to the City in 1411, and the manor building was replaced by a granary, school and chapel. The market expanded to sell other goods, and throughout the following two centuries, it became a booming centre of commerce. You could buy bread, cheese, wool, leather and even cutlery. 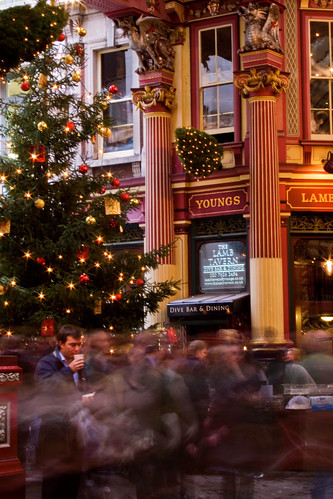 It managed to escape the Great Fire of London with only minimal damage, and during the rebuilding process it became a covered structure. At this point, it became the Beef Market, the Green Yard, and the Herb Market. The stone structure was replaced with wrought iron and glass in 1881. Now it sells greeting cards, pens, chocolate and cigars, among other things, and is even home to a Pizza Express and Ben’s Cookies. The market appeared as Diagon Alley in Harry Potter & The Philosopher’s Stone, and was also used in The Imaginarium of Dr Parnassus. It was restored in 1991 and is now a Grade II listed building. I’ve been in before, a few years ago at Christmas and a couple of years ago past closing time when it was deserted, but I always like to go back. 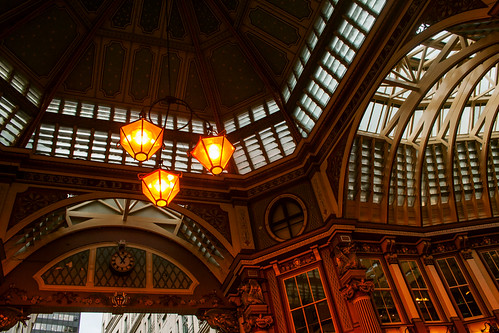 While I never actually use any of the shops, or eat at any of its restaurants, I absolutely love Leadenhall Market. It has such a wonderful aesthetic, and I’ve got a bit of a thing about covered markets. They’re just such a good idea, and the fact that they’re covered gives them a feeling of permanence denied to regular markets – you know it isn’t going anywhere, and you can develop a connection with its shops and traders. 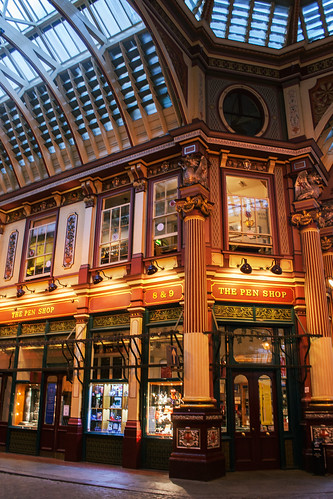 We used to have two covered markets in Newcastle, but the Green Market was turned into an extension for the main shopping centre, leaving just the Grainger Market, which has seen something of a regeneration in recent years. Places like Leadenhall Market become tourist attractions, not to mention fashionable, and it’s an easy way to preserve little slices of history.

The shops are largely open from Monday to Friday, 10am to 6pm, but you can walk through the cobbled walkways any time of night or day as they’re open to the surrounding streets.