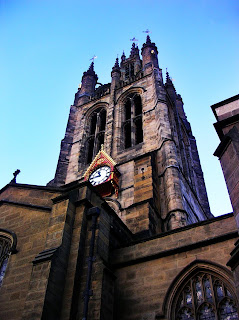 This week’s Friday Flash, A Black Night In The Churchyard, seems to have captured a lot of people’s imaginations. After the good reception that my post on Bunhill Fields cemetery got, I thought I would dabble in local history again and explain a little about the setting that inspired my flash.

In the heart of Newcastle upon Tyne stands St Nicholas’ Cathedral (see left), the Church of England church for the Diocese of Newcastle. A church has stood on this site since 1091, although the original parish church burned down in 1216. It was rebuilt in 1359, and it became a cathedral in 1882. The lantern spire dates to 1448. In my humble opinion, it is one of the most beautiful ecclesiastical buildings in the entire country. Certainly, York Minster, Durham Cathedral or Canterbury Cathedral are impressive, but St Nicholas’ smaller scale makes it seem almost cosy. I am not religious in the slightest but I still find the place quite welcoming (though that may be due to the friendly volunteers who’ll take you around during the day to point out notable features). 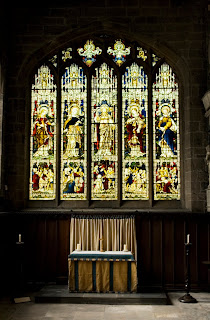 Inside the Cathedral is a tomb. This isn’t particularly remarkable due to the English insistence on burying their dead under the foundations of their holy buildings (although the great Christopher Wren wanted an end to the practice due to the subsidence problems caused by a combination of rotting flesh, noxious gases and early building materials). This particular tomb is believed to house an anonymous knight. Local lore has it that his lord gave him instructions to protect the Church, which he continues to do even in death.

Clanking armour and the sound of metal-clad feet on gravel have been heard, while people have also reported seeing a cloak disappearing around the corner, or through a wall. Alone in the Dark Entertainment run ghost walks and tours in the area, so I asked David Marshall, one of their guides, about the story of the boy who broke the window.

“A small group of chavs were sitting drinking some cheap liquor within the grounds when one of the lads started arguing with his female partner for the night. In a fit of drunken rage, he threw a bottle at the window, destroying centuries of history within seconds. Without a thought for what he’d done, the lad and his group continued arguing and shouting, eventually leaving the site and heading back to their homes.

“For days afterwards, the lad was plagued by dreams, waking up in a cold sweat with fading visions of swords being hung above his head and a dark figure chasing him through his sleep. The dreams grew worse and  in the coming weeks other things started happening. The TV would turn itself on and off, objects would be moved when no one was in the room, keys would disappear only to reappear weeks later in full view. On and on these events went, gradually getting worse and worse, to the point of things being thrown by an unseen source.

“The dreams continued, the sword, the dark shape from a darker place.. a warning.. Admit his sin or perish. The lad was taken to psychiatrists, where they could only suggest sleeping tablets. A team was called in to investigate the strange happenings at home, the poltergeist, the daemon, the angry spirit.
Nothing helped. The lad could take it no longer and travelled into the city, walked into the police station and begged to be locked up. … He was taken to trial, all the while the torments continued, until the moment at which the gavel struck and the sentence passed. In that one instance, the torment ended. … The boy slept safe and secure, penance paid, in his cell.”

Given that it is unlikely a drunken hooligan would be aware of the Black Knight, it is therefore easy to discount the possibility of him “imagining” these events as a symptom of his paranoia. I’ve always liked this particular story, although it has since been left out of the ghost walk at the Cathedral’s request. I wanted to celebrate the work of the Knight, and that provided the impetus to write the flash.

I admit that I did change a few details, since the Cathedral is far from being forgotten or dilapidated, although it is true that building work in the area has eaten into the churchyard and changed the level of the ground. The yard was also the site of grave robbing, and other ghosts have been seen in the area. I also took a little artistic license since the Knight of legend terrorises ne’er-do-wells rather than consuming their souls.

I do hope that the Knight one day manages to find peace, but sadly I think the descent of humanity into new levels of selfishness and degradation will mean he is needed more than ever.

If you’re in Newcastle upon Tyne, then I highly recommend a visit to St Nicholas’ Cathedral. If you’re interested in the dark tales of my home town, then Vanessa Histon’s Nightmare on Grey Street

and Ghosts of Grainger Town

are both excellent places to start!