The Bank of England has stood on Threadneedle Street since 1734. With such a long history, you’d expect it, and the area, to be haunted. Indeed, the Square Mile packs a lot of human activity into a relatively small space. 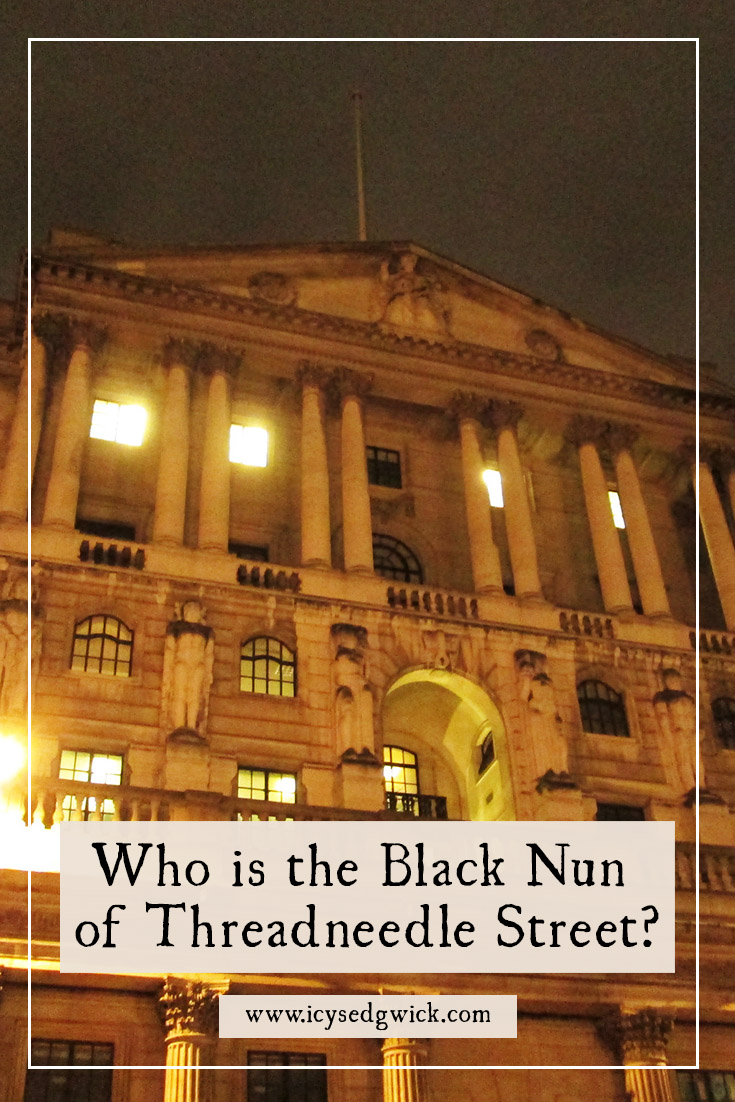 The Black Nun of Threadneedle Street is a favourite story on ghost walks around the City of London. But is it entirely accurate? Is there any truth to the story?

Let’s delve into this slice of London folklore to find out.

Why is Threadneedle Street important?

Threadneedle Street got its unusual name in 1598. It was previously part of Broad Street. It’s also the site of the Bank of England.

The Bank of England was founded in 1694, during the reign of William III. The bank is the world’s second oldest central bank, after Sweden. War with France drained William’s coffers and two merchants agreed to found a national bank to lend money to the Government.

The money financed the war, while taxes on alcohol and shipping paid for the interest on the loan.

Its original location was in the Mercers’ Hall on Cheapside. George Sampson designed the original Bank building on Threadneedle Street. Meanwhile, Sir John Soane designed the next building for the Bank of England. In 1830, the artist Joseph Gandy painted this exquisite watercolour of the Bank in ruins.

You can see this gorgeous painting at the Soane Museum in Lincoln Inn Fields (which I highly recommend). Sir Herbert Baker demolish Soane’s version in 1925 to build a new Bank of England building.

A banking crisis, forgery, and a new nickname

In 1797, James Gillray produced a satirical cartoon that portrayed the Bank as an old lady dressed in banknotes and sitting on a chest of gold. William Pitt the Younger makes unwanted advances.

A financial crisis raged at the time, known as the Restriction Period, which lasted from 1797 until 1821. The overprinting of banknotes had caused a shortage of gold. As a result, the Bank of England temporarily didn’t have to exchange notes for gold. The Bank began issuing notes for £1 and £2 to compensate for the gold shortage. This made forgery an ideal crime because those now handling paper currency weren’t used to it. They were often illiterate, and couldn’t recognise fake notes (Bank of England 2021). Forging banknotes became a capital offence. Over 300 people were hanged for doing so during the Restriction Period.

The problems between the Bank and the politicians didn’t go unnoticed. Richard Sheridan, Member of Parliament and playwright, referred “to an elderly lady in the City of great credit and long standing who had made a faux pas” and “had unfortunately fallen into bad company”. Many believe this description inspired the cartoon.

Such a catchy name obviously stuck and the Bank became personified as this Old Lady. It’s still referred to as the Old Lady of Threadneedle Street.

But what about the ghost story?

So we’ve discussed the fact that the Old Lady of Threadneedle Street is actually the Bank of England, not a ghost. But that doesn’t mean there isn’t a spectre in the area.

The figure sometimes referred to as the Old Lady is also known as the Black Nun of Threadneedle Street, or the Bank Nun. To find out who she is, we need to go back to the 19th century. This was a period in which many crimes were punishable by death.

In 1811, Philip Whitehead worked in the Cashier’s Office at the Bank of England. In November 1811, the authorities charged him with forgery. They hanged him for the crime in 1812.

Philip also had a sister named Sarah. In some versions of the legend, she took the news of his offence and execution badly. She continued to visit the Bank every day, always asking to see Philip, and always turned away disappointed. According to the story, Sarah dressed in black and wore a black veil, earning her the nickname “The Black Nun”.

In other versions, no one bothered to inform her of his hanging at all. In this story, she arrived at the Bank and asked to speak to her brother. A clerk told her of Philip’s fate, not realising who she was. Sarah took the news badly of her brother’s death badly, and something inside her snapped.

When the clerks turned her away, she sometimes accosted customers instead, always asking for her brother. Eventually, the Bank officials tired of her behaviour, worried about the effect it might have on the Bank’s reputation. In 1818, they paid her to stay away. Reports suggest she did so for the remainder of her life.

Sarah died in 1840 and she was buried in St Christopher-le-Stocks’ churchyard. In later years, the Bank of England absorbed the churchyard when it expanded.

She doesn’t lie quietly though

The proximity of her grave to the Bank apparently explains why people see her in the area. A local worker allegedly spotted her pounding the gravestones with her fist in the churchyard.

Whenever Sarah appears in the street, she still dresses in black and still seeks her brother. She apparently stops passersby, asking if they’ve seen him.

She also makes appearances in the nearby Bank underground station. One worker believed he’d spotted an old lady in the station. Given the early hours of the morning, he thought she’d been locked in. He tried to catch up with her, only for her to disappear down a corridor with no exit.

Workers sometimes report knocking inside empty lifts after the station closes. There are reports of strange smells but, let’s face it, it’s the underground. It would be weird if there weren’t any smells!

When I did a ghost walk in March 2013, the guide told us a tale about Sarah. He’d told the story to a previous tour group and one of the tourists turned white.

The guide asked what was wrong. The tourist, an American visiting London on business, told him that he’d gone for a walk the previous evening. He’d encountered a woman dressed in black who asked if he knew where her brother was.

The tourist wanted to help but couldn’t. So he turned to see if anyone else on the street knew of her brother. When he turned back, she’d gone.

Maybe the tour guide made up the story to help sell the legend. But it sounds good all the same. It also matches other reports of sightings, in which a woman dressed in black stops passersby to ask if they know where her brother is.

I’ve never seen her myself but if you ever find yourself in the area, and a woman in a black veil stops you to ask after her brother, at least now you know who she is!

Ian Topham checked the records and found that two employees of the Bank of England were executed for forgery in 1811 (2018). But they were Richard Armitage and C Thomas—and they were executed on 24 June, months before Philip was apparently arrested. He found no mention of Philip.

That said, I checked British Newspaper Archives and found a mention of Philip Whitehead from 12 November 1811. The article says,

Philip Whitehead was indicted for forging, or uttering (knowing it to be forged), the acceptance of Thomas Gullan, livery stable keeper, King Street, Westminster, to a bill of exchange for 87l. 10s. drawn by the prisoner on Mr. Gullan, and made payable at the banking house of Messers. Ransom and Co. The Jury found the prisoner Guilty—Death.”

£87 and 10 shillings was worth approximately £4,070.96 in 2017. Given the intolerance towards forgery during this period, Philip’s fate seems less surprising. This makes a great kernel of truth around which to build the ghost story.

What about the churchyard?

St Christopher Le Stocks was demolished in 1781 to make way for a bank extension. The authorities re-buried those buried in its churchyard in Nunhead Cemetery between 1867 and 1933 (Topham 2018). So, if Sarah Whitehead was one of them, she’s not buried on the site anymore.

The churchyard is now an enclosed courtyard for the Bank of England, so I can’t help thinking the tale of the worker witnessing Sarah pounding her headstone is wishful thinking. Still, people apparently saw her in this courtyard, so who knows? Perhaps she was originally buried in the churchyard, and she lingers due to the Bank’s links with her brother. After all, few ghosts haunt cemeteries, so why would she go to Nunhead just because her remains had?

Still, I searched the online catalogue for the Bank of England Archive and found they hold papers about the Black Nun story. They refer to her as the ‘Bank Nun’, and apparently the papers include an account written by Sarah herself, dated December 1837. I haven’t been able to visit the archive in person to check this out, but I’ll update this post when I do.

Ultimately, I think someone discovered the story of Sarah Whitehead visiting the Bank of England, and the legend wrote itself. It would be easy to extrapolate a ghost story from the truth, turning a grief-stricken sister with compulsive behaviour into a lost, mournful spirit. Unless, of course, it’s true, making this a great example of a ghost story in which we can see the original facts that help to explain the existence of the spirit!

Who do you think the Black Nun of Threadneedle Street is?

Fascinated by hauntings of railways and tube stations? Become a £3.50-per-month Patreon supporter to access my supporter-only podcast episodes! Enjoy an entire episode dedicated to railway ghosts and legends…

If you want to receive these posts in your inbox, just add your email below. I’ll even send you a guide to protecting your home using methods from folklore!

Topham, Ian (2018), ‘The Bank of England and The Black Nun’, Mysterious Britain, https://www.mysteriousbritain.co.uk/hauntings/the-bank-of-england-and-the-black-nun/.