Transport may seem like a necessary evil to get you from A to B.

But have you ever used it as a plot point? A character quirk? Or a means of world building?

You can use one, or all three, to round out your fiction in a more unexpected way! 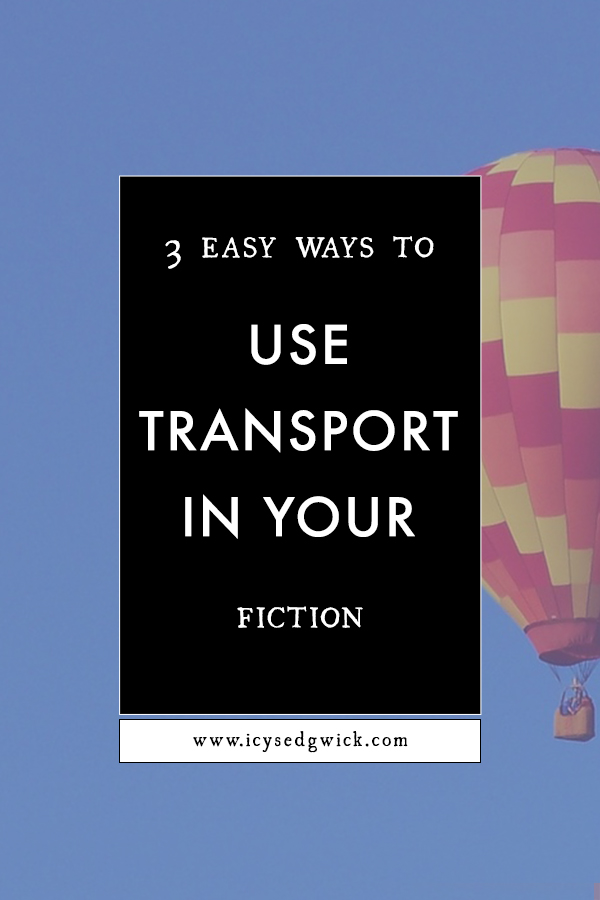 This post was inspired by Claire Wingfield’s 52 Dates for Writers. I’ve chosen to focus on Date 23, because it concerns something that I think sometimes gets forgotten about in fiction.

As with all of the dates, Wingfield advises that writers get out and do something. In this case, writers should go and try out an unusual form of transport.

Wingfield suggests a Segway, or rickshaw – or even a camel ride.

Using the experience as food for thought, you should then write a scene in which a character uses an unusual method of transport.

Transport is essential for moving your characters around your world!

How else is everyone supposed to get around? Due to the alternative historical atmosphere of my Underground City books, I have characters using gondolas and coaches.

I drew on my experience of Venice for the former and my love of gaslight fiction for the latter!

So use what you know. Have you been on an old-fashioned steam train? Or whizzed through Manhattan in a yellow cab? Use that experience.

If you don’t know it, then either find out if there’s somewhere you can experience it, or do your research!

1) Use transportation methods to ‘show’ your character.

Say your character always wears grey clothes, has decorated his house with 80 shades of beige, and he drives a Volvo. What does that say about him?

Now consider a gentleman in a frock coat who wears a battered top hat and rides a piebald horse through the streets of London, even though it’s 1978.

Which one stands out in your mind?

You could argue that the guy in the top hat would anyway. But look at the method of transport. You’re relying on the assumptions people naturally make when they make a first impression of someone.

Watch The Count of Monte Cristo (2002). When making his grand entrance among the rich and powerful of Paris, the Count arrives by hot air balloon. What does that say about him? How do the other characters react to him?

Hell, Pixar even made films about transport AS character! What can you learn about the types of characters in Cars from the type of transport they are?

Sometimes you need to get your characters from A to B, and the part in between isn’t important. Chapter transitions can provide that ‘jump’ from one to the other.

But by skipping the journey, you might be missing an opportunity. Think of the number of great scenes on board the Hogwarts Express!

Or watch The 39 Steps. There’s a fantastic sequence on board a train to Edinburgh, as well as a wonderful sequence in the back of a motorcar.

Or the latter part of Back to the Future III! The final car chase of Death Proof! The famous car chase in Bullitt! Or the section of Vertigo where James Stewart follows Kim Novak’s car through the streets of San Francisco! Or the last big fight of Batman Begins on the monorail!

If you really want to try something different, then plan or write a scene (or a short story, if you’re up to it) focusing on a common mode of transport. But make it interesting. Amp up the drama. The power. The awe. The sheer tomfoolery.

And this all builds into the next point, which is to…

3) Use transport to flavour your world building.

Steampunk is an obvious choice here, with dirigibles or hackney cabs taking characters around the story locations. Westerns use railways and horses (I combine the two in the opening chapter of The Guns of Retribution). Science fiction usually nails it, and Tron: Legacy is a particularly good visual example.

How characters get around is really important in ‘genre fiction’, but it’s even useful in romance, or literary fiction. After all, transport is great for giving a sense of place (how far do your characters have to travel to work?) as well as a sense of time  period (what cars do they drive?)

No matter what you choose to use, methods of transport are a brilliant way to signpost the reader as to what genre you’re writing, as well as what they can expect from the story.

Over to you! Do you use transport in your fiction? How do characters get around?