Italy has become something of a favoured destination of mine after two trips to Venice, so when the opportunity presented itself to also visit Florence, I naturally jumped at it!

I went on Wednesday afternoon and came back on Saturday night. I thought I’d share my findings for anyone else who might fancy a trip there. 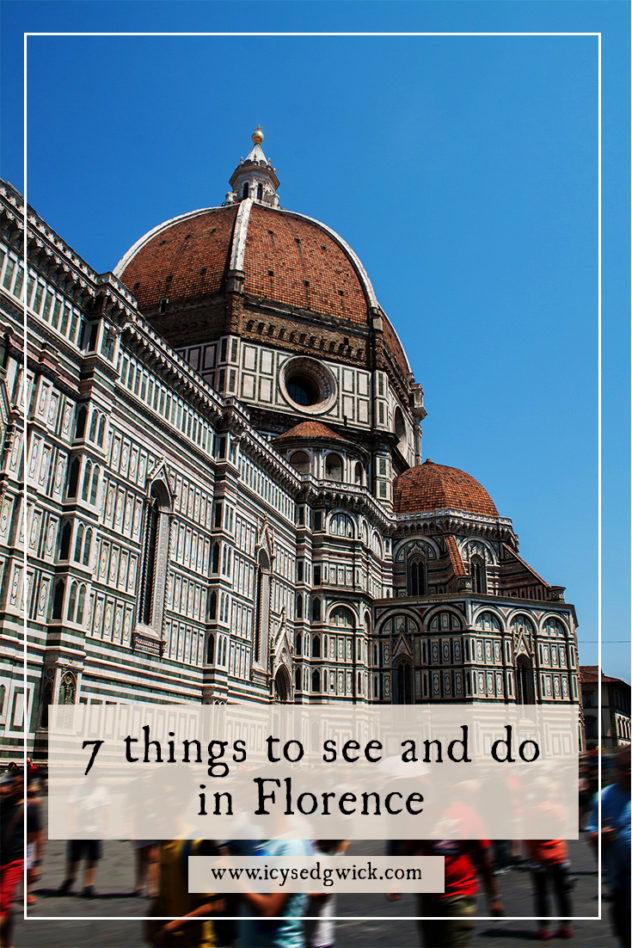 It’s served by two bus routes but a third isn’t that much further away. The hotel’s only real downside is the fact it doesn’t have its own restaurant, and there aren’t really any in the area. Just use it as a base and do everything in the city centre.

The hotel does offer breakfast, and its WiFi is spotty (but at least it’s free). There’s also an outdoor pool, if you fancy a swim! There are plenty of angel statues around the garden but don’t worry, they don’t move.

As we flew with Jet2, we actually flew to Pisa, not Florence. But there’s a regular coach service, run by Terravision. It travels between Pisa Airport and Florence’s Santa Maria Novella train station. It’s only €6 (£4.25/$6.58) for just over an hour’s trip.

In Florence, we really made the most of the bus service. The 10 and 17 routes served our hotel, with the 10 going to the Piazza San Marco, and the 17 going that bit further to the Santa Maria Novella train station.

What to See in Florence

We bought a 24 hour pass for €20 (£14.15/$22) to use the city sightseeing bus. It has three lines, and we used lines A and C. C is a two hour trip that goes up to the nearby town of Fiesole, an Etruscan settlement, and also takes in the Fiorentina stadium.

A is more ‘local’ around the city centre. As with any of the sightseeing buses, you can hop on and off to see the attractions. The commentary provides a good insight into the city you’ve chosen to visit.

You definitely get a more picturesque tour of Florence on the bus.

No trip to Florence would be complete without a visit to see Michelangelo’s David. There are other artworks on show but David is very much the star here – with good reason!

We pre-booked tickets before we left the UK, which cost €23, but you can buy tickets when you get there. Even with timed tickets we still had to queue but it was only a 20 minute wait.

Previously you couldn’t take photos inside the Accademia Gallery but now their only stipulation is ‘no flash’. It’s not difficult to achieve and it’s well worth learning how to turn off your flash so you don’t get a telling off!

Entry also includes entry to the Musical Instruments Museum, which is an interesting set of rooms including violas, hurdy gurdies and different types of piano.

The Duomo is the massive cathedral that dominates the Florence skyline, as well as the Piazza del Duomo in the historic city centre. It’s free to visit, but beware of the queues! We didn’t make it inside since the lines were too long. If you fancy trekking up 400+ steps, you can get breathtaking views from the dome.

The museum is situated on the Via Romana in the Oltrarno area south of the Arno river. It’s very much off the beaten track so it has the definite advantage of not being full of tourists. It’s quiet and quirky, and well worth a visit.

“La Specola” dates back to 1775, and until the early 19th century it was the only scientific museum specifically created for the public. 24 of its rooms are dedicated to zoology, included taxidermied animals.

10 rooms are given over to the anatomical waxes, some of which date back to the 17th century. They were originally created in order to teach anatomy without students having to directly dissect corpses. Entry to these rooms costs €6 (£4.25/$6.58).

In addition, the museum also has the Tribune of Galileo, a 19th century secular temple dedicated to Galileo.

The museum hosted a special exhibition on crystals while we were there. So for an extra €4, we paid for the combined ticket to see that as well as the main museum. (€4 is £2.83 or $4.39). The crystals on display were gorgeous though I didn’t see any Kryptonite.

Near La Specola is the imposing Palazzo Pitti. The palace building was begun in the 15th century but was only truly completed in the 17th century. Now it houses a whopping eight museums.

There’s the Gallery of Modern Art, the Royal Apartments, the Boboli Garden, the Carriage Museum, the Silver Museum, the Palatina Gallery, the Porcelain Museum and the Costume Gallery.

The Silver Museum is, as you might imagine, a collection of jewellery. They also had a Lapis Lazuli exhibition on at the time we were there. The rooms in which this exhibition was held were worth the entry price alone, with generally astonishing frescoes on the ceilings.

The Costume Gallery usually displays fashion through the ages but a special ‘Women in Fashion’ exhibition was on, and I fell in love with a lot of the clothes, particularly this dress!

The gardens are HUGE and we didn’t even see all of them. Entry is incredibly good value for money. You could easily spend an entire day exploring all of the galleries, as well as the gardens. Like La Specola, it benefits from being in the Oltrarno district, which is a bit more bohemian than the districts north of the river. It boasts plenty of artisan craft shops if you fancy a spot of expensive window shopping.

The Ponte Vecchio is one of THE things to see in Florence. Like the Rialto Bridge in Venice, it’s a good example of the bygone days when people thought nothing of erecting houses and shops on bridges.

Originally the bridge housed butchers, but these were cleared away to house jewellers since the bridge was a main route to the Palazzo Vecchio.

It now hosts jewellery shops, art dealers and your typical souvenir tat. We walked across to reach the city centre from the southern district and it’s very, very busy.

The Vasari Corridor also runs along it, connecting the Palazzo Vecchio with the Palazzo Pitti via the Uffizi Gallery. Most of it is closed to visitors but it hosts a large art collection that you can apply to see.

Definitely worth a look!

The Leaning Tower of Pisa

If, like us, you travel via Pisa and you have the time, then it’s well worth getting the bus to the tower. It only takes around twenty minutes by bus, and the bus is every fifteen minutes. The stop is right outside – like Florence, each ticket only costs €1.20. There is a charge if you want to go up the tower, or you can pose like a loon beside it for free.

Where to eat in Florence

Finding dinner options is a lot easier than finding places for lunch, and there are an array of restaurants around the city centre. Many of them offer typically Florentine cuisine, which is what you’d expect from an Italian restaurant outside of Italy.

There are bars where you can buy sandwiches. Some smaller shops offer single slices of pizza to take away. We found our favourite two restaurants were Giglio Rosso, at Via dei Panzani 35, near the Santa Maria Novella station, and I Matti, at Via Borgo San Lorenzo 31, just off the Piazza del Duomo.

Prices vary, but you’ll find restaurants get cheaper as you move away from the Piazza del Duomo. I noticed most pizzas were between €7 and €10, which is $4.95 to £7.08.

Compare that to Pizza Express, where the cheapest pizza is £11.60!

Pasta dishes are around the same price, but the main course options can be between €11 and €16 each. I don’t drink so I can’t speak about the prices for alcohol but a litre of still mineral water was just €3!

Also, a lot of restaurants simply add a €2 cover charge to the bill. Some add it to the whole bill, others add it per person. Either way, it’s easier than working out how much you have to leave as a tip.

My thoughts on visiting Florence

I was only in Florence for two full days (the remaining half day was spent souvenir hunting and seeing the Leaning Tower of Pisa). I didn’t get to see half of what is available, but I was pleased with what I did manage to see

But I’m glad we focused on the slightly more offbeat attractions. I’m not sure that tourists get a particularly warm welcome in the city, having had fairly surly service in a couple of cafes. It’s very busy in July so be prepared for the city centre to be packed.

Head down to Oltrarno and enjoy a more laidback side of Florence. And see some of the more unusual museums on offer!

Over to you! Have you been to Florence? What did you see?