In my Creativity series, I’ve talked about why having too many ideas can be as bad as having too few, and the value of creative rule systems. Today I want to talk about something that is currently very close to my heart.

It is perfectly okay to not be excellent at everything you do first time out. You are allowed, nay encouraged, to suck at stuff. 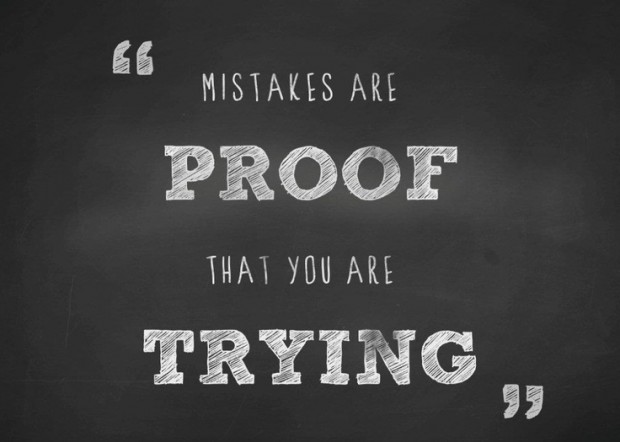 Failing is something that humans do a lot – it’s why we have version control. Trouble is, we’re constantly bombarded with images of perfection that we feel we can’t fail, or everyone around us will instantly flick into judgemental mode.

It’s also something that happens a lot to creative types, and it’s something that can easily provoke all kinds of crises when it does happen. From the failure of the absymal first draft that you’d rather use as toilet paper to the attempt at a new painting medium that turns your creative output into something fit only for your mother’s fridge door, we panic when we fail. We’re supposed to be good at this stuff, right?

Well you have two choices. You can fail, and give up. Or you can fail, grimace, and have another go.

1) If at first you don’t succeed…improve it later.

Some people are perfectly okay with failing, and they’re able to look at why they failed, and improve that little aspect so that next time they do better. It’s a process of constant refinement. This is essentially the point of failure – it forces you to get things right. If you continually succeeded first time round, you’d get bored, because you’d never be challenged – and whatever you did do would end up sub-standard because you’d never have to try. But if you constantly have something to tweak, streamline or practice, you have something that inspires and motivates you to get better at whatever it is you’re trying to do.

After all, you can’t get into a car for the first time and expect to drive like Lewis Hamilton, so why would you try writing and berate yourself for not immediately being J. R. R. Tolkien?

2) Don’t pressure yourself to succeed first time out.

Occasionally you’ll have a go at something and be a natural. It’ll all fall into place, and you’ll think “Hey, this is easy!” If that happens, then go with it. Embrace it. But remember that you’ll still need to practice. But if it doesn’t happen, and in all honesty it probably won’t, then don’t berate yourself for it. Ask yourself this – did you enjoy whatever it was you tried? If you didn’t, are you likely to enjoy it if you improve? If you did, then don’t you want to continue doing it just for the enjoyment of it? After all, the more you do something, the better you’ll get anyway. It’s just practice.

3) Use mistakes to your advantage.

Not every mistake is a bad thing. The slinky, penicillin, potato chips, pacemakers, microwaves, Scotchguard and Post-It notes all started out when their creators tried to do something else. Just because something doesn’t turn out the way you wanted it to doesn’t necessarily mean it’s wrong – it’s just different, and could potentially be better. So that historical romance you tried to write which turned into steampunk, or the political thriller that became a sci-fi epic, isn’t a mistake, it’s just not your original intention.

Whether you ultimately improve or not is entirely up to the amount of time you do, or don’t, devote to practice, but don’t immediately give up as soon as you fail. Just try again!