It might sound a bit mental, but yes – you could certainly do so! However, whether you would or not is possibly open to debate. Anyway. Back at the start of the month, I attended a workshop at the National Glass Centre in Sunderland to make jewellery using microwave fused glass. I like learning new techniques and trying new things, and as my granddad used to work at Pyrex, I hoped that glass might be something that runs in the family. We started out by cutting glass – which is a strange process in which you ‘score’ the glass, then use pincers to ease it apart along the fault line you just created. 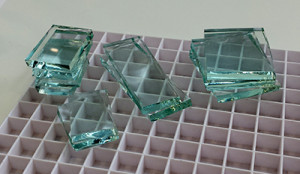 The pieces above are float glass made from window glass, but I much preferred the diachronic glass that was available due to its range of colours and textures. The assembly process was quite straightforward – layer pieces of glass together, making sure you kept like with like, securing each layer with a dab of water soluble glue. 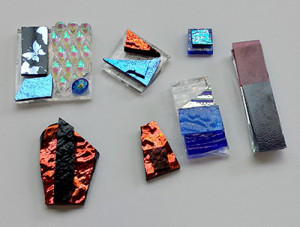 Next, the pieces were loaded into the microwave inside a special microwave kiln. It’s a fairly experimental process, but the idea is to fuse the glass to round the corners, and blend colours etc.

Thing is, it doesn’t always work. I made this piece, which I was really hoping would work well, but it failed in the microwave. It wasn’t actually anything I’d done wrong – the microwave itself turned out to be faulty, and wasn’t getting hot enough, so this piece cracked. A second piece I tried ended up as nothing more than a molten twisted mass after the kiln shifted inside the microwave, and my piece got stuck to the side of the kiln. It’s not a foolproof process. In fact, the technical difficulties were such that I had to leave my pieces to be fired later. Luckily they all worked, but I didn’t get them through the post until last Tuesday! 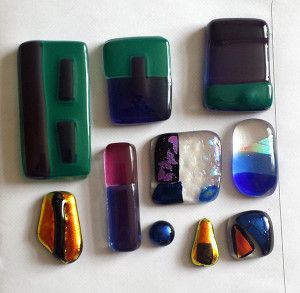 I’m really pleased with them, and there are two in particular that I’ll be turning into pendants (the red/purple bar in the middle, and the clear/light blue/dark blue rectangle in the middle of the righthand column). Would I try it again? Probably not. The microwave kilns cost around £60, and it’s recommended that you buy a new microwave so as not to risk contaminating your ‘food’ one with anything. You also need to buy material to keep the glass warm in once you’ve taken it out of the kiln to let it cool down slowly, and then there’s the cost of the glass. The results are nice, but too haphazard for me to want to make a range of glass jewellery. I leave that to the maestros at Murano.