I freely admit that I know nothing about Dungeons & Dragons. So I especially haven’t got a clue how you’d write a D&D campaign, let alone a dark fantasy inspired adventure! Thankfully, I know someone who does. So it’s my pleasure to hand over my blog to Hollie Jones who’ll teach you how to write a dark fantasy D&D campaign your friends will love. Take it away Hollie!

Dungeons & Dragons is enjoying a renaissance right now. Since the huge success of Stranger Things, the game is no longer sidelined as a ‘geeky’ (albeit unashamedly so) hobby. Groups are popping up everywhere, attracting players from all walks of life. 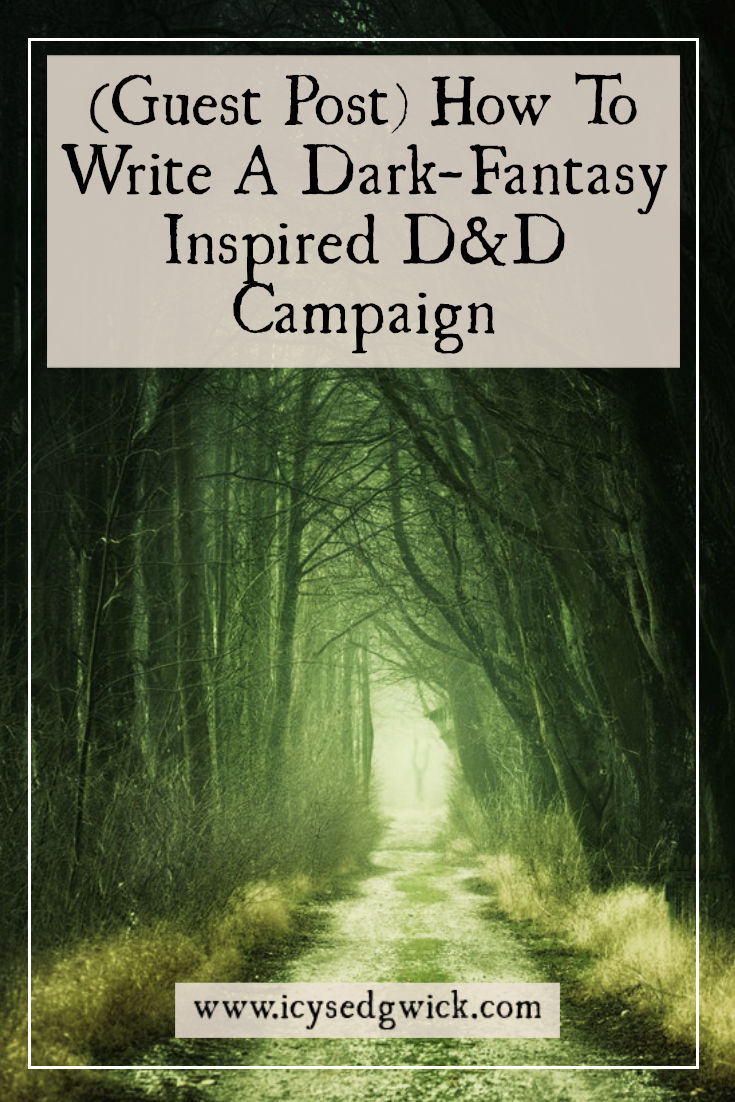 The appeal of Dungeons & Dragons is easy to see. Taking you through brave new worlds created and guided by an omnipotent Dungeon Master, the game provides an unpredictable adventure in which one wrong decision can see your character fall.

If you’re a dark-fantasy-loving Dungeon Master, take heed. Here are some useful tips to help you craft your own dark-fantasy-inspired D&D campaign.

Let your prologue do the talking

Your prologue is the gateway to your entire campaign. It’s as much about setting out the world awaiting your players as it is about setting the tone. So what does a prologue look like in a well-written dark fantasy campaign?

As the name implies, it should be extremely dark. In your dark fantasy world, there is no obvious hope or light to provide comfort. Everyone, hero or monster, must struggle to survive. Think bleak, gritty, and sparse when it comes to hook-worthy character traits (as Springhole notes, though, don’t try too hard to force the mystery).

Take Neil Gaiman’s American Gods, for instance. Though it’s based in a contemporary setting (a version of modern-day America), it feels desolate and empty. The protagonist, Shadow, lives up to his name — when the story begins, he shows little substance.

Of course, the nature of D&D requires an element of fantasy. With creatures such as dragons and frost giants appearing in the monster roster, it might seem tricky bringing fantasy creatures into a modern civilised world. As in American Gods, though, it is possible to meld fantasy and contemporary elements very effectively.

The key is to give your fantasy elements some modern purposes. For instance, in a world torn apart by nuclear war, grotesque creatures might rise from the depths of the earth to reclaim what was theirs millennia ago. This purpose is what gives your prologue power: a meaning that can drive your world, NPC, and ultimately your players’ decisions.

Focus on a single idea and build from there

Writing a D&D campaign is a lot like writing a book. It needs a compelling beginning, an engaging middle, and a satisfactory end (whether happy or not). A good book is one that combines these elements to string the reader irresistibly along. But before you even start with those elements — and as the Jericho Writers piece on how to plot emphasises — you need “one fabulous idea”.

No matter how different they might otherwise seem, this is as true for a D&D campaign as it is for a novel. While it’s tempting to fill your campaign with an array of fantastic side-narratives and complex themes, a single good idea will trump a dozen mediocre ones any day. Strive to find a single idea that resonates.

Writing a D&D campaign, you have the advantage of knowing your readers ahead of time. Alongside their character histories, you also have insight into what makes them tick and what pain points they have as players. Consequently, your narrative should tap into that and compel your players on a personal level.

If you’ve DMed for the planned players in the past, think about what elements triggered the strongest responses from them. You don’t need to copy from past campaigns, but let them inspire you. For instance, perhaps one player engaged deeply with a redemption narrative, while another preferred a tale of unclear morality (contrasting classic fairy tales) in which they had to make tough choices.

Tap into your players’ psyches and put them at the heart of your idea. Then add elements of dark fantasy to flesh it out. You’ll create a compelling narrative that draws players ever deeper into your universe.

As every Chaotic Good Rogue knows, stealing is okay when it benefits the greater good. The same applies to your D&D campaign. After all, Rome wasn’t built in a day, and you’re looking to build an entire world (albeit of the imagination). In the end, having fun is more important than being original. So why not borrow from books you know and love?

For instance, perhaps the power struggle between the three kingdoms of Joe Abercrombie’s The First Law inspires your own Machiavellian plot point. Or maybe the mysterious Nuban of Mark Lawrence’s The Broken Empire Trilogy gives you an idea for your own enigmatic NPC.

You don’t need to copy anything word-for-word (and you certainly shouldn’t). Just take the elements you love, throw in some personal touches, and you’ll have something new. So take some time to revisit all the classics from your library and start soaking up the vibes. Let the concepts whirl around your mind, and something is bound to emerge soon enough.

Go dark to nail your NPCs in your D&D campaign

Non-playable characters are some of the trickiest things to get right in a D&D campaign. Environments, players’ backstories and adventures are all vital for successful campaigns, but it’s the NPCs who really bring the fun. This useful NPC guide from Roll For Fantasy offers some sound advice on NPC creation for newbies. It serves as a solid foundation on which to build your cast of dark fantasy characters.

Dark fantasy is characterised by dark and often-terrifying versions of your traditional fantasy characters. Rather than the friendly and helpful gnomes from traditional folklore, gnomes of D&D dark fantasy worlds may be sly — or even murderous. And imps, which are traditionally mischievous creatures, become less playful and more malicious: for instance, rather than playing pranks, an imp might use subterfuge to steal a player’s soul for its demonic master.

While it’s not out of the question, it’s worth staying away from the more ‘real-life’ creatures on the D&D monster list. Wolves and cats are the obvious exceptions. Giant frogs and giant badgers generally don’t lend themselves to a dark fantasy D&D campaign, for instance (although if you like a challenge, you can certainly try).

Instead, opt for more dark and supernatural characters. Evil gods (like the Aztec demon of Gertrude Barrows’s The Citadel of Fear) can work very well. They combine seemingly unbeatable power with a malicious edge.

Alternatively, you might opt for a more mundane but equally terrifying human. Think of Randall Flagg in Stephen King’s The Stand. At first, he’s rather humdrum, clad in faded jeans and a cowboy hat. He’s ultimately revealed as a sorcerer of the dark arts and destroyer of worlds.

It’s the horrifying warping of otherwise-innocuous elements that will help you create striking dark fantasy NPCs your players will remember long after your campaign has ended.

In Dungeons & Dragons, the world you create is your own. This constitutes an enticing opportunity for dark fantasy fans. Why not draw upon your most beloved fiction to create a spectacular campaign? The players will be exhilarated and challenged. What’s more, they’ll quickly learn to beware the smiling DM…

Hollie Jones is a lifestyle blogger who lives for writing. Hollie’s drive, passion, and background come from the arts and media sectors. You can read her latest blog posts on Hollie and the Ivy, where she shares tips and advice about her passions while having a lot of fun along the way.