As we saw last week, there’s more to astrology than newspaper horoscopes and star signs. In this blog series, we’re looking at the Greek origin myths of the signs in the zodiac. 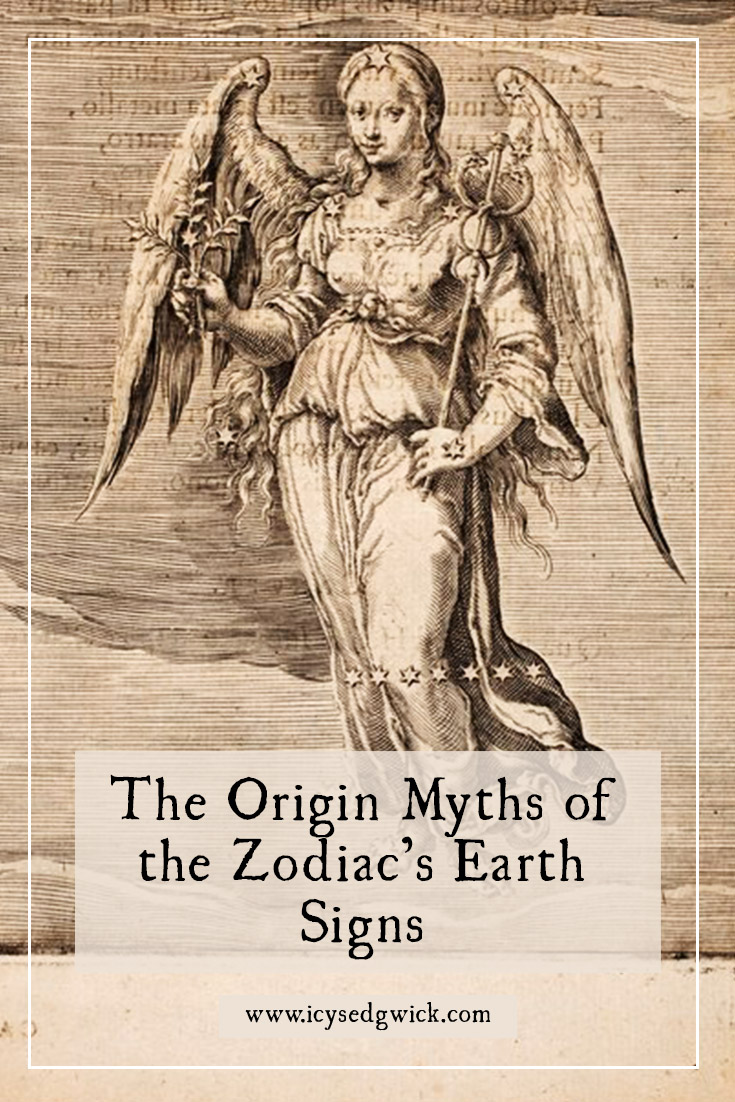 The twelve signs of the zodiac are divided into four clusters of three signs. Each cluster takes its name from one of the four elements. In the last post, we looked at the fire signs. This post will include the three earth signs: Taurus, Virgo, and Capricorn.

Taurus – First of the Earth Signs

Taurus is the first of the earth signs in the zodiac, and appears after Aries. Its Greek name is Tauros Kretaios, which became Taurus Cretaeum in Latin. The name translates as the ‘Bull of Crete’. In the most popular version of the myth, the bull belonged to Poseidon, who sent it to Crete. Some versions of the legend believe Poseidon sent the bull so King Minos would sacrifice it in his name. Trouble was, it was such an attractive bull, Minos couldn’t bring himself to sacrifice it.

The king kept the bull and sacrificed a different one to Poseidon. Bad idea. Queen Pasiphae, sister of the sorceress Circe and King Aeëtes (who we met in the Aries myth), even mated with the bull. You’ll recognise the name of their offspring—the Minotaur. This bull-headed man ended up imprisoned beneath the palace in a giant maze.

According to Bacchylides and Hyginus, Aphrodite was the one who made Pasiphae desire the bull. That’s because Pasiphae had stopped making offerings to Aphrodite (Atsma 2000-2017). Yet Apollodorus claims Pasiphae’s desire came from Poseidon, not Aphrodite (2015: 91). Perhaps Poseidon was annoyed about the inferior sacrifice. Meanwhile, Madeline Miller, in her fictional retelling Circe, suggests Pasiphae did it on purpose.

Either way, Poseidon wasn’t particularly impressed at Minos deciding to keep the bull. The sacrifice of a different bull didn’t satisfy the sea god’s notorious temper. He turned the bull mad, and it laid waste to Crete, which is why Eurystheus sent Hercules to capture it. Fetching the Cretan Bull became one of Hercules’ twelve labours. He managed to capture it, and set it free on the mainland. Unfortunately, it rampaged through the countryside outside Marathon before Theseus finally killed it. After its death, the gods put the bull among the stars as the first of the earth signs.

That’s not the only version

As we saw with Sagittarius last week, there are other origin stories connected with Taurus. An alternative version claims the bull to be Zeus in disguise. He adopted this form to abduct Europa, a beautiful Phoenician princess. He stole her away to Crete, where he threw off the bull disguise and seduced her in his human form (2015:90).

Their son was Minos, who went on to become King of Crete. Yep, the same Minos who wouldn’t sacrifice the bull Poseidon wanted him to sacrifice. If this legend is right, then Poseidon was Minos’ uncle. It’s also a bit weird sending your nephew a bull to sacrifice if that’s the form his father took to deceive his mother!

Either way, both legends have the bull emerging from the sea. This can explain why the constellation only translates as half of a bull. Its hindquarters should be where Aries and Cetus are (Ridpath). In the legends, we can’t see them because that part of the bull is still submerged.

There are also some links between Taurus and the Roman god Mithras. The main sculpture or image associated with Mithras is the tauroctony. It depicts him slaying a bull. While the symbolism is unclear, there is some debate as to whether the bull represents Taurus.

Virgo is the second of the earth signs and reigns over the harvest period. There is some debate as to her identity, but she’s most commonly believed to be Astraia, the virgin goddess of justice. Her name, Astraea in Latin, translates as ‘Starry One’.

Ian Ridpath points out that Virgo is the second-largest constellation (only Hydra is larger), but it’s also the largest of the zodiac. This is why it’s not strictly accurate to say “the sun is in Virgo” because it’s not. It’s in the segment of the elliptic dedicated to Virgo, not the constellation. But who was Astraia?

In some legends, her parents were Astraeus, father of the stars, and Eos, goddess of the dawn. In others, they’re Zeus and Themis, and she’s actually Dike, goddess of justice.

According to Aratus, Eratosthenes, and Ovid, Astraia lived on earth among humanity during the era of the Titans. This period was also known as the Golden Age. Humans didn’t know war or famine. Astraia handed out justice and wisdom to all who would listen (2015: 73).

Then Zeus and the Olympians overthrew the Titans and the Silver Age began. Humans became argumentative and Astraia found herself admonishing them, rather than advising them. She missed the Golden Age and moved to the mountains, away from humanity. When the Bronze Age came along, humanity further descended into violence and war. Astraia gave up altogether and abandoned her place on Earth. She now sits in the zodiac, watching over the humans she no longer advises (Atmas 2000-2017).

Other contenders for the most human of the earth signs

Elsewhere, astrologers have considered Virgo to be Demeter, the goddess of the harvest. There’s no real reason why this would be the case, other than the fact Virgo holds an ear of corn. Eratosthenes and Hyginus offered seven possibilities for her identity, including Tyche, or Fortuna, to the Romans (2015: 73). But this goddess of fortune usually held the horn of plenty, not an ear of corn (Ridpath).

Other writers offered Athena and Hecate as possible options, but it feels at this point like they’re just choosing female figures (Condos 1997: 207). It makes more sense for Virgo to be the virgin goddess of justice, Astraia. Especially since the scales of Libra are right beside her!

Capricorn – The Confusing One of the Earth Signs

Like Sagittarius, Capricorn doesn’t refer to the name of what it represents. And like the other earth signs, there are a few interpretations as to why there is a half-fish, half-goat creature in the zodiac. The constellation appeared first with the Babylonians and Sumerians. Then the Greeks decided to create a new origin story for it.

In one version, Aigipan, or Aegipan in Latin, was a goat-legged Pane. The Panes lived in the mountains and highlands where they protected sheep and goats. These nature spirits had the nose, ears, horns, tail, and beard of a goat. The Romans called them Faunus or Fauni.

They were sometimes compared to the satyrs, though Panes had much more goat-like features. The legends vary as to their parentage, though Zeus, Pan, and Hermes are all put forward as their father. Occasionally, people conflate Aigipan and Pan, considering them to be the same figure.

In one version of the myth, the Olympians grappled with the Titan, Typhon. Pan suggested that the Olympians took the form of animals to hide from Typhon. He himself took the form of a goat with the tail of a fish. Zeus didn’t follow suit and continued to fight Typhon. The Titan pulled the sinews out of Zeus’s feet and hands. Zeus could do little to fight back. Pan and Hermes stole the sinews back from Typhon. As a thank you, Zeus put Pan in the zodiac as Capricorn (Ridpath).

In another version, Hyginus claims that during the battle between the Titans and Olympians, the god Pan dove into the Nile. He took the form of a goat above water, and a fish below (Condos 1997: 72). Zeus was impressed by the ruse and put the image of the sea-goat in the zodiac, which explains Capricorn’s hybrid form.

Capricorn is a particularly confusing constellation because of the variations in the origins story. Theony Condos calls Capricorn ‘Aegocerus’. This version quotes Epimenides, who claimed Aegocerus was raised alongside Zeus. His first claim to fame was his decision to fight alongside Zeus in the battle with the Titans.

His second was that he’d invented a trumpet, called the Panicus. When he blew it, the sound caused the Titans to scatter, which helped give the advantage to the Olympians. As a thank you for these two things, Zeus put Aegocerus in the zodiac as Capricorn (1997: 71).

Finding the seashell horn in the sea apparently explained his half-fish body (Eratosthenes 2015: 79)!

So we have Capricorn as Aigipan the Pane, fighting alongside the Titans. We have him as Pan in disguise. Or we have him as a childhood playmate of Zeus. There’s no way to know which is the ‘official’ version.

The main difficulty with the legends occurs because no one can agree if Aigipan is his own creature or a different form of Pan. Condos explains that Eratosthenes was trying to find a way to marry up the traditional image of Aigipan with the Babylonian hybrid goat-fish figure (1997: 72). So all we can glean is that the goat-fish derives from a form taken during the battle with Typhon. Which is still quite cool if you’re a Capricorn!

Which of these earth signs are you?

People often associate the earth signs of the Zodiac with a certain ‘earthiness’, solid temperaments, and a no-nonsense attitude to problem-solving. None of these attributes come from the signs themselves, but rather the associations of the element of earth.

Like the fire signs, the earth signs also mark a range of types of myth. Taurus should be sacrificed but instead fathers the Minotaur and rampages across Greece. Virgo is a goddess of justice who turned her back on the wars and nastiness of humanity. Capricorn is a loyal companion who defeats a monster and demonstrates agile thinking in the process. I think we can definitely appreciate the strong, logical, and fair traits on display among the earth signs!

Come back next week to learn the origin myths behind the air signs: Gemini, Libra, and Aquarius! Sign up for my list at the link below to get a notification when the post goes live.