Say ‘Easter’ to most people, and they’ll think of eggs or rabbits. They may even think of Jesus, hot cross buns, or ancient pagan deities. 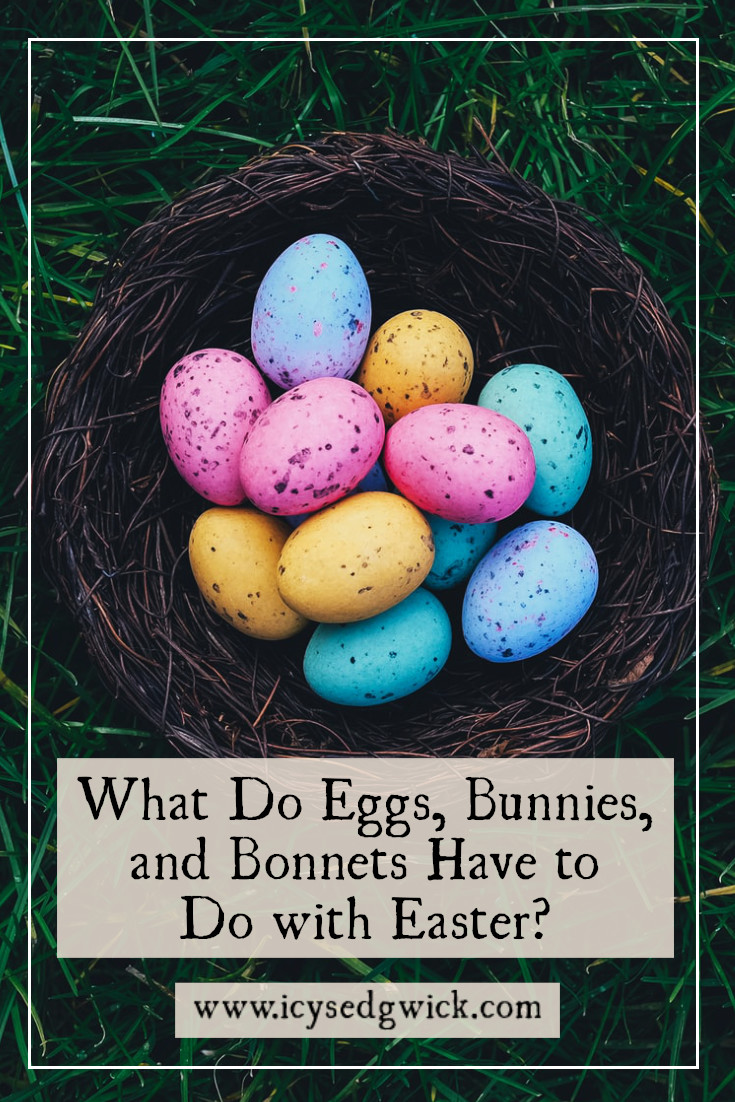 The whole celebration has become something of a mishmash of all these things. There are sombre overtones for the religious, and fun treats for the secular. In a lot of ways, it’s become like Christmas or Halloween.

Here at Fabulous Folklore, we’ve briefly touched on at least one Easter tradition before. That’s the practice of adding a hot cross bun to a collection of such at the Widow’s Son Tavern in London.

This time, let’s explore how eggs, bunnies, and bonnets came to be associated with Easter. Before we do that, let’s look at the thorny issue of Easter’s name…

Hit play to hear the podcast episode or keep reading!

Easter and Eostre – Truth or Fiction?

Browse almost any article about Easter online and many of them will say the festival took its name from a pagan goddess, Eostre. Apparently she was a fertility goddess…or was she?

The connection between Easter and an apparent goddess called Eostre dates to the Venerable Bede. I say “apparent” because Bede claimed that the Anglo-Saxons named the year’s fourth month Eosturmonath (Simpson 2003: 103). Bruce David Forbes notes that Bede pays scant attention to it, devoting just two sentences to this explanation of the Eosturmonath name (2015: 94).

Trouble is, Jacqueline Simpson and Steve Roud make the point that no one can actually confirm the existence of Eostre as a deity (2003: 103). Forbes points out there is “no art, no carvings, no religious objects” to corroborate her existence (2015: 95). And if she was important enough to have an annual feast named after her, you’d think there would be evidence. She doesn’t appear anywhere else, meaning some scholars think that Bede worked backwards from the name of a season. Here, he assumed the season must take its name from a deity.

Patti Wigington suggests Eostre might have been a local goddess in Kent in southern England (2020). Bede was a Christian scholar, not a poet, so it’s weird to think he might have simply made her up. But the possibility for mistranslation exists.

Eostre may have languished in the writings of Bede had it not been for Jacob Grimm, one half of the Brothers Grimm. In 1835, he brought Bede’s work back to light. It was Grimm who tried to link Eostre with Ostara, a Germanic goddess. Forbes explains that Grimm used language as his main tool, looking for similar names “in early Indo-European languages and cultures” (2015: 96). His mistake was to assume they all referred to the same goddess.

Forbes also points out that Grimm’s second mistake was to argue that Eostre/Ostara must have been very important for Christians to tolerate her name being used for Easter (2015: 96). It’s a reasonable assumption, but sadly, difficult to prove.

Other Contenders for the Name

The Greek mythology fans among you will recognise Eos as the goddess of the dawn. Simpson and Roud point out it’s as possible that April marked the start, or dawn, of a new year for the Anglo-Saxons (2003: 103). Yes, a goddess would still be involved if this were the case, but it’s not the one we think.

Forbes also points to this link, particularly since ‘Easter’ and ‘east’ have the same root (2015: 96). The sun rises in the east, beginning a new day, which carries connotations of the new life that begins in spring.

Knowing this doesn’t stop people from repeating the Easter/Eostre connection as fact. While researching this article, I found a piece on Time magazine’s website that states the Easter rabbit “stems from pagan tradition, specifically the festival of Eostre—a goddess of fertility whose animal symbol was a bunny” (Sifferlin 2020). The links between hares and Celtic deities do exist, but it’s hard to claim an animal symbol for a goddess whose worship few can find evidence for.

Forbes even points out that Bede doesn’t say what Eostre presided over, and he said nothing about her association with any animals or objects (95). These have been inferred or simply added ad hoc over the years, and then cemented into the modern concept with little or no historical basis.

Eggs traditionally represent new life and abundance. Forbes tries to avoid any attempts to draw links between earlier pagan egg symbols and Christianity (2015: 105). Yes, the ancient Egyptians believed “the entire universe hatched out of an egg” (2015: 105). Other myths from around the world give the egg similar symbolism. So the egg becomes a general symbol of new life, rather than a specifically pagan one.

Forbes finds evidence of practices involving Easter eggs in the Middle Ages (2015: 105). In 1290, King Edward I in England (Edward the Longshanks, the evil king in Braveheart) ordered 450 eggs to be “colored or covered with gold leaf” and handed out among his household (2015: 106). You can also find similar practices in Russia.

Eggs were also not to be eaten during Lent. Those not used for hatching were hardboiled for consumption at Easter (Simpson 2003: 105). This led to all manner of fun and japes involving the hardboiled eggs.

They could be decorated by dyeing them, using natural substances like coffee grounds, onion skins, and even wild plants.

The eggs also formed the centrepiece in popular games. In Carlisle, children knocked hardboiled eggs against each other like conkers. The first egg to break went to the victor as spoils of war. Children might also roll the hardboiled eggs down hills or along paths until they cracked. At that point, they’d eat them.

I have also found people saying they think egg rolling represents the rolling of the stone from Jesus tomb. That said, there doesn’t seem to be much evidence to support this. It could also come from the fact it’s fun and easy to do.

Parents also hid brightly-coloured hardboiled eggs in the garden to be found. While we don’t play games with them now, this game lives on in the Easter Egg Hunt. With (usually terrible) chocolate now replacing hard-boiled eggs, children can seek out the hidden treats. These chocolate Easter eggs enjoy links with Easter rabbit.

According to History.com, the world’s largest Easter egg was over 25 ft high. An internal steel frame supported its chocolate and marshmallow exterior (2020). It begs the question…where do the eggs come from? Would you believe that people claimed they were laid by the East Rabbit?

People associate rabbits and hares with Easter largely due to the fact they represent fertility and new life. Forbes points out that hares were sacred to Aphrodite, Greek goddess of love and beauty (2015: 101). They make an ideal symbol for a festival preoccupied with rebirth and regeneration.

German settlers took the concept to America and continued the practice, where it eventually morphed into its current form (Simpson 2003: 105). Forbes points out that the Easter rabbit took hold in colonial America because there weren’t many other Easter traditions (2015: 101). He also thinks the hare morphed into a rabbit because bunnies are more child-friendly than hares (2015: 102).

Cora Linn Daniels and C.M. Stevans collected a range of Easter-related lore and superstitions. According to them, if you took a branch off a fruit tree “two Sundays before Easter Sunday” and put it in water, it would blossom on Easter Sunday (2003 [1903]: 878).

There was also a connection between the willow tree and Easter. To find love, you should throw your shoe at the tree. If it got caught among the branches, you’d marry that year. Be warned: you only get nine throwing attempts (862). Also, planting a willow tree at Easter would protect its field from storm damage (2003 [1903]: 862).

Not getting new clothes could bring bad luck, and you could even expect to be “dropped” on by birds or spat at by dogs ( Simpson 2003: 104). People also gave and received new gloves at Easter, especially men to their sweethearts or tenants to their landlords.

Forbes notes that the tradition would make sense since anyone who survived winter would need to change their clothes with the season (2015: 112).

From Bunnies to Bonnets

This tradition of wearing new outfits gave rise to New York’s Easter Parade in the 1870s and 1880s. The well-to-do would stroll along Fifth Avenue after attending Easter church services to promenade in their spring outfits. This tradition was immortalised in Judy Garland’s 1948 film, Easter Parade.

The parades are now less of a fashion show and more of a carnival. But the parade lived on through the concept of Easter bonnets. My favourite part of primary school was making them out of cardboard and tissue paper. Then we’d stage a parade through the school hall to show them off while the caretaker played the piano!

There’s no real folkloric link between Easter and the bonnets other than this parade, and Spring being the best time to get new clothes. But it’s a wonderful way to mark the change in seasons!

Even if there was no such fertility goddess as Eostre, we can still celebrate the shift towards warmer weather, new life, and plants bursting forth.

What’s your favourite part about Easter?

Why not sign up below for my guide to protecting your home using folklore?

Daniels, Cora Linn and C.M. Stevans (2003 [1903]), Encyclopedia of Superstitions, Folklore, and the Occult Sciences of the World, Vol. 2, Honolulu: University Press of the Pacific