We’re finishing the Folklore of Drinks theme with cider folklore. Cider has a long history, especially here in Britain. When the Romans arrived in Britain, they discovered the locals drinking a beverage made from apples. It wasn’t quite cider yet, and no one knows how long this drink existed prior to this point. 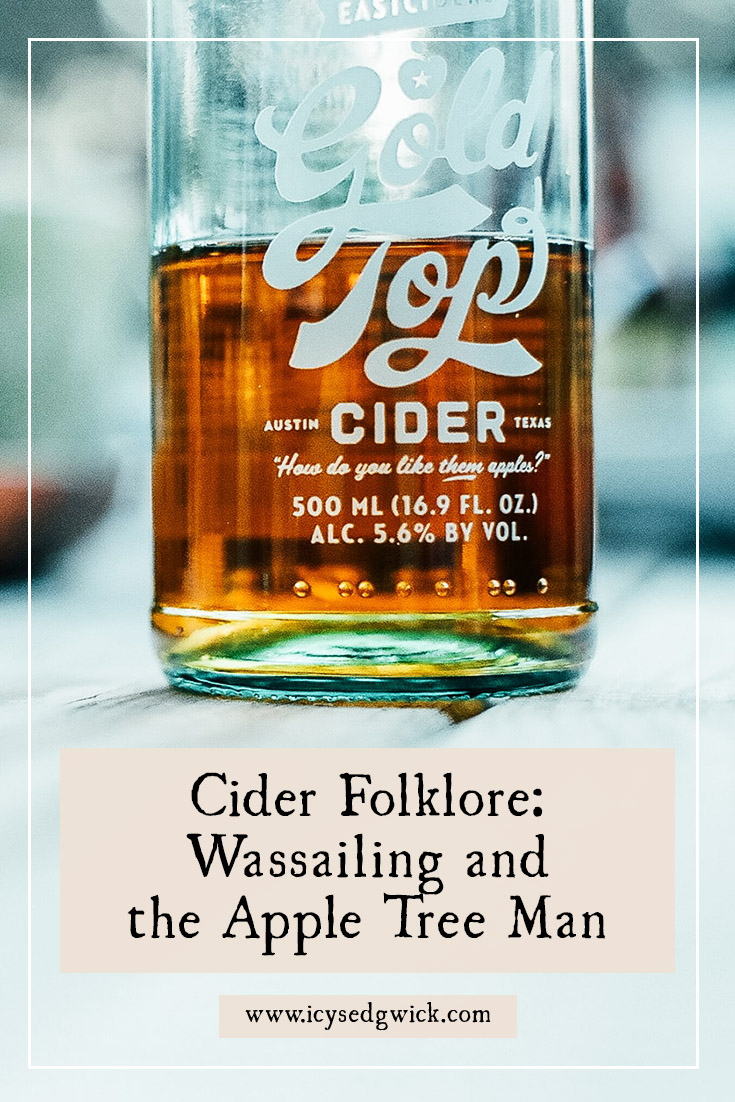 Cider then spread across the Roman Empire, and Charlemagne even references it, thus confirming its popularity in Europe by the 9th century. The Normans imported the idea of apple orchards and even the word ‘cider’ during the Norman Conquest of 1066.

Cider became an important industry in the medieval period, with monasteries making their own cider to sell. Its popularity peaked in the mid-17th century, and agricultural changes saw it go into decline. It’s had something of a resurgence in recent years (National Apple Museum, n.d.).

Surprisingly, there’s not a huge amount of cider folklore. There are a few fairy legends, but the custom of wassailing more than makes up for it! So let’s go and learn about wassailing and the Apple Tree Man!

Cider and the Fair Folk

There was also a legend from the village of St Briavel’s in Gloucestershire concerning cider and fairies. Here, a farmer named John Jones lived in the area. A bad year left him struggling to pay his rent. Selling cider seemed the best way to earn something towards his rent.

As soon as he left the house, a man appeared, asking if he was selling cider. Jones said yes, and they settled on a price. The man then gave instructions to take a hogshead of cider up to the Big Meadow. There, he’d find a Fairy Ring, where he should pour the cider onto the grass inside the ring. The man paid and left. Jones thought that was a waste of good cider.

Even though he’d been paid for cider, he carried a hogshead of water up to the ring that evening and poured it onto the grass. He stepped out of the ring and came face to face with his buyer—now irate. The man cursed Jones and his family that they would be cursed until they’d lost as much blood as he’d poured water into the ring. As the story goes, the family ended up with various stories in which members bled to death (Eyre 1902: 176-7).

The definitions for the size of a hogshead vary, but Collins Dictionary gives one in which it is either 238 litres or 63 gallons. Bear in mind the adult human body has around 5 litres of blood (Geggel 2016). So based on that, you’re looking at 47 people bleeding to death, with one lucky individual only losing 3 litres of blood.

This may explain why, “[a]s late as 1930 at least haymakers in North Devon would remember to throw a crumb or two of their lunch and a drop of their cider on the ground” (Brown 1964: 153). Apparently, this appeased the local pixies.

There are two types of wassailing in the English calendar: the type in which people go door to door, and the form in which people visit orchards to ensure the health of the apple harvest in the coming year. It’s the latter type that we’ll explore here.

G. R. Willey describes the custom of wassailing as Saxon in origin. The term apparently comes from wes (be) and hál (whole), meaning ‘be of good health’. The visiting houses custom happens on 5 January, while visiting apple trees happens on 17 January (Willey 1978: 60).

No one really knows where apple wassailing comes from. As always, there are those who insist it’s an ancient pagan rite, though the first record seems to date to 1585 (Chainey 2021).

The general rite takes the following format. People go to the orchard on 17 January and either select the best/oldest tree, or visit each of the trees in turn. They might sing to the tree, or dance around it, before cider is poured onto the tree’s roots from the wassail bowl. Then people made a lot of noise, often by firing guns, to frighten away evil spirits. The final step involved putting toast in the tree’s branches as an offering to the good spirits. The toast might be soaked in cider first, and some think the good spirits took the form of birds—hence the toast.

In some customs, wassailers must visit every apple in the orchard. People stopped doing it in Dunster after the men accidentally wassailed a pear tree as well (Palmer 1971: 281).

E. F. Coote Lake reported on a wassailing ceremony in Carhampton, Somerset in 1959. People had been wassailing in the orchard beside the 300-year-old Butcher’s Arms for generations. On January 17, up to 200 people gathered for the wassailing, which was broadcast live by the BBC. Licensee Eric Tarr provided buckets of hot cider, laced with ginger to toast the trees’ health (1959: 340).

January 17th marks Old Twelfth Night, and the custom at Carhampton had a revival in the 1920s after attendance dropped.

During the ceremony, the attendees wished the trees good health before singing the Apple Tree Wassail Song (Lake 1959: 341). Then three men fired guns through the tree branches to scare away evil spirits. People soaked toast in cider and hung this among the boughs as an offering to good spirits. Birds represent these spirits, especially robins (Lake 1959: 341).

In 1971, the following song was collected from Tarr in Carhampton:

Old Apple Tree we wassail three,
And hoping thou would bear,
For the Lord doth know where we shall be
Till apples come another year,
For to bear well and to bloom well,
So merry let us be,
Let every man take off his hat
And shout at the old apple tree,
Old Apple Tree we wassail thee,
And hoping thou would bear,
Hatsfuls, capsfuls, three bushel bagfuls
And a little heap under the stairs.
Hip hip hooray!’

Naturally, the wassailing custom appears in different variations around those parts of the country famous for apple orchards.

At Sea near Ilminster, the people poured cider on the roots of the tree that provided the most apples. This saved wassailing all the trees in the orchard (Palmer 1971: 283).

In Crowcombe, a boy put the toast in the branches of the best or oldest tree. Once everyone had drunk from the cider cup, the rest was poured around the tree’s roots (Palmer 1971: 283).

In Curry Rivel and Drayton, near Langport, people also went on to wassail the most important inhabitants of the village after wassailing the trees. This occurred on January 5, Old Christmas Eve in the “Folk Calendar” (Palmer 1971: 283). Here, we see a conflation of the two types of wassailing custom.

In another variation, people would dip the lowest branches in cider, and then everyone present bowed three times. On the third bow, they’d raise up as if bearing something heavy, as if telling the tree it should produce a heavy load of apples (Watts 2007: 413).

Another version of the Somerset wassailing song runs thus:

“Wassail, wassail, all round the town,
Our cup it is white, our ale it is brown,
Our bowl is made of the good old ash tree,
So now my brave fellows, let’s drink unto thee”

One of the reasons behind wassailing may be its use of sympathetic magic. Provide an offering of cider to get more apples—cider’s raw ingredient—in the next harvest.

Or it may be a remnant of a rite to appease the local Land Spirits. Incidentally, if you’re interested in Land Spirits, I have a bonus episode of Fabulous Folklore available to Patreon supporters at the £3.50 a month tier!

But this could tie in with the stories of the Apple Tree Man.

In Somerset, an orchard’s oldest apple tree is referred to as the Apple Tree Man. According to Katharine Briggs, the orchard’s fertility depends on this spirit (1976: 9). Ruth Tongue collected tales about the Apple Tree Man in Somerset, famous for its cider. In one of the stories, a man who didn’t have enough money to pay his rent offers his last mug of cider to the orchard trees on Christmas Eve. The Apple Tree Man rewards him by showing him where he will find enough buried gold to pay the rent (Briggs 1965: 46).

In another tale, a tortoiseshell chat used to go wandering in the woods at night, but one New Year’s Eve, the Apple Tree Man stopped her from going into the orchard. He didn’t want her around the people coming wassailing since they’d be shooting guns to scare away the witches. He told her to go home, and not go wandering again until St. Tibb’s Eve. She never wandered at night again since she didn’t know when St Tibb’s Eve was. As the story pointed out, “Nor do anybody else” (Briggs 1965: 47).

This wouldn’t be a Fabulous Folklore post without some mention of medicinal uses. Surprisingly, the medicinal uses of cider are not that common.

People sometimes used cider that was turning to vinegar to treat muscle sprains even as recently as the first half of the 20th century (Watts 2007: 90). In Dorset, people gave a mixture of marigold tea and cider to those with measles (Watts 2007: 243).

Yet in its apple cider vinegar form, cider does appear in a range of home remedies.

Get rid of foot odour by mixing apple cider vinegar with water and Epsom salts and soaking your feet in it.

Add apple cider vinegar to the water when boiling or poaching eggs to get firmer egg whites.

Mix 1 part apple cider vinegar with 1 part mixture and use as a hair rinse to help detangle hair. Wash it out after leaving it on your hair for a few minutes. Some recommend massaging diluted apple cider vinegar into your scalp to remove dandruff but there is only anecdotal evidence that it works.

Obviously, try these at your own risk, and dilute vinegar more if you have sensitive skin since vinegar is acidic. There are more apple cider vinegar uses at Healthline.com.

So what do we make of this cider folklore?

The relative lack of cider folklore, compared with tea, fascinates me, given the length of time cider has been popular in Britain. Its use as an offering for the fairies makes sense in the Gloucestershire legend, though we should note it was actually a purchase, rather than an offering. Jones reneges on a business transaction made in good faith!

But in wassailing, that mainstay of cider folklore, cider becomes the offering to the spirit of the trees to ensure a good harvest. Here, successful cider ‘buys’ more apples to make more cider. Pouring cider on the roots becomes an act of sympathetic magic—and a surprisingly popular one, at that!

So while it might not have the same legends as beer, or witchcraft links to wine, cider still becomes a firm part of British folklore. Just remember not to wassail a pear tree by mistake…

What do you make of cider folklore?