Put ‘christmas trees’ into Google and it returns about 1,350,000,000 results. They’re an intrinsic part of the festivities, yet you actually have three main types of conifers to choose from: pine (Pinus), fir (Abies), and spruce (Picea). Oslo has sent a Norway spruce to London every Christmas since 1947, displayed in Trafalgar Square (Woolf 2020: 189).

But what exactly is the folklore associated with conifers? How do they appear in protective practices? Can you use them in magic? And what is their link with Christmas? Let’s find out!

The use of the fir tree as a Christmas tree is usually attributed to Prince Albert when he introduced the tree as a Christmas staple in 1840. Though, to be fair, Queen Charlotte, wife of George III, actually set up the first known tree in 1761 in Windsor (Barnes 2006). The difference is that Charlotte decorated a yew branch, according to the tradition practised in Mecklenburg-Strelitz.

By 1800, she switched from a single bough to an entire yew tree. She decorated it with baubles, fruit, and presents, and set it up in Queen’s Lodge. It became a firm favourite with the children, which was the whole point of Charlotte’s festive creativity. And we all follow her lead even now (Barnes 2006).

So the Christmas tree was already firmly established with the English aristocracy by the time Charlotte died in 1818. When Albert brought the spruce firs from Coburg in 1840, the aristocracy already knew about the tradition. But periodicals caught on to the Christmas trees in 1845, and it was the media that then spread the custom to the lower classes. In 1854, a farmer’s wife in Suffolk recorded that the family had a Christmas tree in her diary (Simpson 2003: 66).

Some think Martin Luther invented the tree in 1536 after seeing stars glinting through the branches of a pine tree—or at least, that’s how the story goes. By 1605, there was a record of the people of Strasburg hanging roses, apples, gold foil, sweets and wafers from fir trees in their parlour (Barnes 2006).

That said, many online articles will confidently tell you that the Romans decorated with fir trees for Saturnalia and that the Celts (who, let’s remember, were not a homogenous group) used evergreen boughs as Winter Solstice decorations. The commonly held idea is that the evergreen trees represented the possibility of life in the depths of winter.

We can be much more confident about what the Romans did since they very helpfully wrote a lot of it down, but the Celts didn’t, so we should be wary about what people claim the Celts did. Individual tribes may have practised particular traditions, but we shouldn’t necessarily attribute those traditions to every Celtic people.

Pine Trees in Mythology and Magic

But pine trees in particular do appear in mythology. According to Greek myth, the god Pan and the north wind Boreas both loved the nymph Pitys. She preferred Pan, and in a jealous rage, Boreas blew her off a cliff. A pine tree popped up on the spot where she’d stood and became a sacred tree of Pan (Porteous 2002 [1928]).

It was also linked with Rhea, the mother of the Olympians, who loved Atys, a shepherd. She asked him to dedicate himself to a life of chastity, but he broke the vow with a nymph. He killed himself for breaking the vow, and Rhea turned him into a pine tree. Zeus granted the pine evergreen status to please Rhea (Porteous 2002 [1928]).

Pine trees also had links with other Greek gods. Since pine cones float, they were also believed to be sacred to Poseidon (Harrington 2020: 100). Thanks to the pine tree’s association with the sea, pine cones can become helpful charms for those near the sea, whether they’re sailing or swimming.

Christina Oakley Harrington recommends making a bundle of floating items, including pine cones and corks, which the recipient can hang up on the boat. Silver is the best metal to use through its association with the moon, which governs the tides (Harrington 2020: 100).

Both the Greeks and the Romans linked the pine cone with love and lust through its phallic shape. People even threw pine cones into the vaults of temples to Demeter to encourage the fertility of the land (Mac Coitir 2015). Pine also had links with fertility, and couples in the Tyrol region planted a pine tree when they married as late as 1950. In Germany, couples planted a fir by the door of the house where they married (Harrington 2020: 100).

In northern Europe, people considered fir trees the king in the forest. People didn’t like to cut them down because each tree had a resident spirit. In the Harz region of Germany, people used to dance around a fir tree so the resident spirit would grant them favours (Harrington 2020: 59). Alexander Porteous asserts these spirits lived in pine trees (2002 [1928]).

The most common form of magic involving conifers turns out to be protective. Making a simple cross from pine needles helped keep evil out of your home if you put it near your fireplace. You could also burn pine needles to return a curse to its sender (Dietz 2020: 166).

If you eat a pine kernel from the cone at the top of the tree, you’ll be invulnerable to being shot (Baker 2011 [1969]: 121). An alternative version of the belief is that collecting pine cones at midsummer would make you bulletproof (Harrington 2020: 99).

Nailing pine branches to stable doors would keep out anyone with bad intentions (Baker 2011 [1969]: 121). Likewise, putting a fir branch at the door of your storeroom meant supernatural beings couldn’t steal your goods (Harrington 2020: 60).

You could also stop nightmares by tying a fir branch to your bedframe with red thread (Harrington 2020: 60).

While we currently associate the pine with Christmas and the winter solstice, in Europe there were once other customs involving the tree. In Saxony, people set up firs and pine trees on May Eve, while in Sweden, people placed young fir trees at their front doors on St John’s Eve. In Germany, fir and pine were also used as May poles (Mac Coitir 2015).

The purifying connotations of pine led people in Silesia to burn “pine resin all night between Christmas and the New Year” so the smoke would ward off evil (Mac Coitir 2015). In Scotland, people carried torches of fir branches around cornfields to bless them at Halloween.

Pine and the Dead

Pine also appears in spells related to the dead and providing them comfort. Christina Oakley Harrington suggests burning pine incense in front of a photo of them. Alternatively, burn pine logs in an open fireplace and share memories of the dearly departed with friends and relatives (2020: 101).

This link with the dead may come from the use of the pine cone to represent eternal life. A pine cone was placed on Hadrian’s mausoleum in ancient Rome (Harrington 2020: 99). Astrologer William Lilly linked the pine with both Jupiter and Saturn, which would make sense given Jupiter’s association with emperors and Saturn’s links with time.

Pines sometimes grow in groups, and they were once called the Seven Sisters. According to tradition, the seventh would always die while the other six flourished (Baker 2011 [1969]: 121).

According to Cato, if you wanted up uproot a pine tree, you should do so after midday during a waning moon, ideally when the seeds were ripe. You had to make sure the wind didn’t blow from the south, and not when dew was falling (Porteous 2002 [1928]).

At one stage, sailors drank spruce beer to prevent scurvy at sea. This was made of crushed spruce leaves and twigs (Woolf 2020: 189).

People carried pine cones to bring vigour in old age, while you could also carry them to increase fertility (Dietz 2020: 166).

What do we make of the folklore of conifers?

Most of the folklore seems to be about pine, with less easily found about fir trees or spruce. There did seem to be some slippage between the different types of conifer even within the same research source!

As far as Christmas goes, the tradition of decorating trees dates to at least 1605, but I don’t think we have to find an unbroken tradition dating all the way back to Saturnalia. A lot of common Christmas iconography comes from the Tudor or Victorian period, and traditions don’t need to be ancient to be valid.

I didn’t manage to find many divinatory practices on record involving these trees, but their purificatory qualities did seem to lend them well to protection. So who knows? Maybe the Christmas tree serves a completely different purpose entirely!

What do you make of the folklore of conifers? Let me know below! 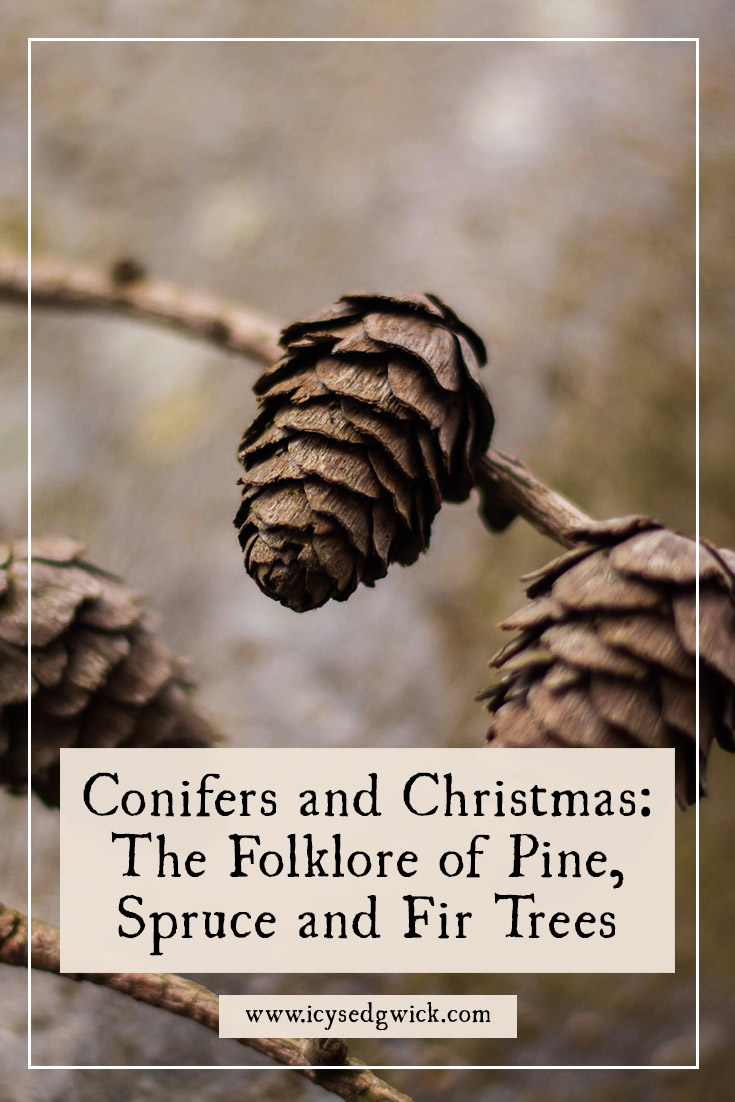