There is something almost glamourous about poisonous plants. From their showy blossoms to their exotic names, they cry out for attention. So it’s easy to overlook the folklore associated with the far more humble edible plants.

These are the herbs we cook with. We might pass them in the dried herbs section. Or we see them in pots in the greengrocer aisle of the supermarket. You wouldn’t think to do magic with them…would you?

Well, as we’ll explore in this post, plenty of these herbs have a lot of magic and lore associated with them. From brazen basil to mellow marjoram, let’s dig into the folklore of Edible Plants.

Hit play to hear the podcast episode of this post, or keep reading!

Basil (Ocimum basilicum) is a plant that seems to divide opinion in terms of folklore. Across most of Europe, people see the plant as one that protects the home and its occupants. Fez Inkwright notes that “the souls of good people are even supposed to smell like basil” (2020: 42).

In the Tudor era, hosts would give guests a pot of basil to help ensure a safe journey. Italian women put a basil pot on her windowsill to advertise the fact she was open to receiving suitors (Inkwright 2020: 42).

This does somewhat change the feeling of John Keats’ poem, ‘Isabella, Or the Pot of Basil’.

Christina Oakley Harrington notes that in Italian lore, if a woman wore basil in her girdle, she was unmarried, but if she wore it on her head, she was married (2020: 22). Courting men would put a sprig of basil on his beloved’s windowsill, since giving it to her directly was considered disrespectful (Harrington 2020: 22).

It’s interesting that the basil-related rites for friendship and love are similar. Both required you to give the other person either a sprig of basil or a basil plant. Or you can make them a meal involving pesto, which is made from basil (Harrington 2020: 22).

By contrast, in France, basil was a plant of the devil. You needed to curse the ground while planting it if you want it to grow well (Inkwright 2020: 42). I suspect that’s why basil represents hatred in the Victorian language of flowers, due to the French origins of some of the plant meanings (Burke 1867: 11).

In the Elizabethan era, doctors thought that a woman in labour could hold a basil root and a swallow’s feather to ward off birth pains (Baker 2011 [1969]: 24).

There was a particularly weird belief that putting basil leaves under dishes meant women couldn’t eat from them (Baker 2011 [1969]: 24).

The Laurus Nobilis is the true bay laurel plant—other plants are sometimes referred to as ‘bay’ or ‘laurel’. But we mean this variety here. The laurel was sacred to both Apollo and his son Aesculapius.

According to legend, Apollo’s roving eye fell on a nymph named Daphne. She wasn’t interested, but Apollo pursued her anyway. Daphne called out to her father, a river god, for help. He turned her into a laurel tree, preserving her from Apollo’s amorous attentions. Apollo began wearing a crown of laurel in her honour.

Romans also used it as a decoration for the Kalends. This was the first day of the month and was sacred to Juno.

It’s also a popular ingredient in folk magic, which directs you to write what you want on a bay leaf before burning it. You can use the same principle to banish things from your life. Write what you don’t want on the leaf and burn it (Taylor 2018).

The Greeks and Romans made wreaths from the leaves of the plant. They gave these to heroes and soldiers, as well as poets. This is where the term poet laureate comes from (Inkwright 2020: 43)!

Chamomile (Camaemelum Nobile) is quite a helpful plant in the garden. Not only does it ward off insect pests, it also helps the plants it grows beside to grow better (Inkwright 2020: 53). Nicolas Culpeper attributed it to the Sun. English chamomile is known as Roman, while wild chamomile is the German variety (Harrington 2020: 36). One of the plant’s old names was ‘earth apple’ (Harrington 2020: 37).

Like St John’s wort, chamomile was associated with Midsummer’s Day. People added chamomile wreaths to their doors on June 24 to ward off misfortune in the months ahead. In Germany, farmers’ wives hung chamomile indoors. If someone who wished her or her family ill came inside, the chamomile would start swaying, giving the wife the heads-up about her visitor’s true thoughts (Harrington 2020: 37).

In Tudor England, people planted chamomile to represent patience and humility (Harrington 2020: 37). It also represented resilience, and it appears in spells to help a person bounce back from rejection.

The herb also appeared in the nine herbs charm. This potion would apparently treat the nine types of infection and poison. It contained betony, buckhorn, chamomile, chervil, crab apple, fennel, lamb’s cress, mugwort, and nettle. You would grind each ingredient into a powder, calling its names and praising its properties three times. The directions recommended you mix it with ashes and soap so you could apply the paste to infected wounds. Mixing it with apple juice turned it into a drink to treat internal poisons (Inkwright 2020: 16).

Dill, or Anethum graveolens, is attributed by Culpeper to Mercury.

While most people probably just use it for cooking now, it was once called ‘the magician’s herb’ (Harrington 2020: 52). Apparently, it has the power to guard against evil spirits… much like the other Edible Plants! If you nailed a sprig of dill to the door, it would trap ill-disposed people inside (Baker 2011 [1969]: 51).

Dill also guards against envy, so you can put dill around anything that people are envious of (Harrington 2020: 52).

Fennel, or Foeniculum Vulgare, appears a lot in Greek lore. They called it Marathon, and named a town after it (Inkwright 2020: 67). Prometheus apparently used fennel to steal fire from the forge of Hephaestus, which he then gave to humanity (Inkwright 2020: 68).

People in the British Isles hung fennel over their doors or windows to ward off evil spirits. Pushing fennel seeds into keyholes had the same effect (Inkwright 2020: 68). People in Somerset pinned it over their door to ward off fire. At Midsummer, its presence over the door kept the household free of enchantment (Baker 2011 [1969]: 57).

The Romans called fennel the ‘herb of sight’ and made tonics from its root to help with eyesight (Inkwright 2020: 68).

They chewed the seeds and leaves while travelling, which helped to reduce hunger (Inkwright 2020: 68). Dill apparently did the same thing, making these very useful edible plants indeed.

In the Victorian language of flowers, fennel meant both ‘worthy of all praise’ and ‘strength’ (Burke 1867: 23).

Oregano, or Origanum Vulgare, is part of the mint family. Its name derives from ‘oros’ and ‘ganos’ in Greek, meaning ‘mountain’ and ‘joy’ (Inkwright 2020: 122). Some of the folklore dovetails with marjoram since it’s in the Origanum genus too.

To the Greeks, seeing wild oregano growing on a grave meant the soul of the dead was happy. The Romans added oregano to the crowns they gave newly married couples to confer happiness (Inkwright 2020: 122).

Greeks let sheep eat wild oregano because, while they thought it improved the flavour of the meat, they also thought it would guard against any snake or scorpion venom if the sheep encountered them while grazing (Inkwright 2020: 123). Meanwhile, people used marjoram as a flea deterrent in the 19th century (Baker 2011 [1969]: 97).

People in Germany and England used marjoram to ward off witches since anyone who sold themselves to the Devil couldn’t stand to be near it (Harrington 2020: 82).

Therefore, marjoram makes sense in protective spells against anyone who wishes you harm (Harrington 2020: 82).

Despite being attributed to Mercury by both William Lilly and Nicolas Culpeper, folklore claimed that the scent of marjoram came from Venus herself (Harrington 2020: 82).

This link with Venus harks back to its use in wedding crowns in the ancient world. Therefore, it makes a great addition to love baths, potions, and charms (Harrington 2020: 82).

Do you see these edible plants differently now?

These edible plants do double duty between enhancing the flavour of food and providing a boost to your life. Whether you want to deter evil, attract love, ward off disease, or heal yourself, these plants offer something to you.

Many of these edible plants are also incredibly easy to grow. I can attest to this since I planted some basil seeds on 28 April, and the plant has shot up since then! It happily grows on the kitchen bench by the window—and tastes amazing. I’ve also got some sweet marjoram on the go, and I’ll no doubt add some of the others!

Whether my basil brings me love or the marjoram wards off harm remains to be seen. But they’re wonderful plants and so easy to add to your home!

And if you want to use it in lotions and potions, then you can learn herbalism for yourself! You can do so with the excellent Rowan + Sage! The Kitchen Herbalism course is a great place to start. Click here!

Do you grow any of these edible plants? Let me know below! 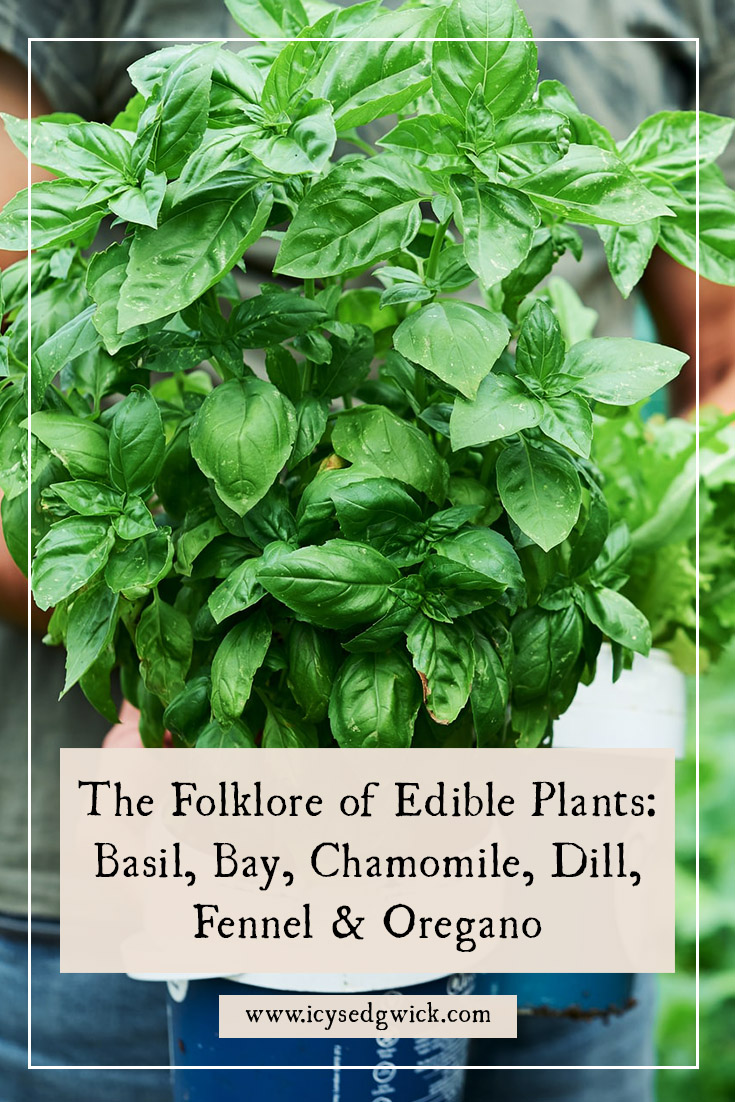