A range of plants enjoy connections with Christmas, not least due to their status as evergreens. At a time of year when many plants have shed their leaves, these plants offer a welcome burst of colour. Ivy (Hedera helix) is no exception, and even features in Christmas carols such as ‘The Holly and the Ivy’.

It has somewhat fallen out of favour, not least because of its invasive nature and ability to weaken built structures. That said, its berries provide a food source to birds in the winter, while its leaves shelter various species in inclement weather.

But what is the folklore of ivy? Why is it linked with Christmas? How is it used in magic? Let’s find out!

Ivy has long enjoyed a link with alcohol, and while this may at first seem odd, in antiquity, the plant was linked with the Roman Bacchus and Greek Dionysus. Their followers wore wreaths of ivy, and drinking establishments that offered wine would hang an ivy vine from a pole outside (Inkwright 2020: 87).

Ivy even appears in remedies designed to ward off the hangovers and illness caused by alcohol. First, you were directed to dissolve ivy berries in vinegar, and you drank this solution. Next, you bruised ivy leaves, boiled them in water, and drank the solution (Binney 2018: 124). I can’t stress enough how much you should not do this.

Others believed wearing an ivy wreath on your head would ward off drunkenness (Inkwright 2020: 87). Laying a trail of ivy leaves across a drunkard’s path was also supposed to sober him up (Baker 2011 [1969]: 83).

People would make their children drink from ivy-wood bowls when they had whooping cough. Meanwhile, soaking ivy leaves in vinegar turned them into a useful poultice to treat corns in Oxfordshire (Baker 2011 [1969]: 83). Over on Plant-Lore.com, one respondent noted successfully tying ivy onto a corn, and being able to dig the corn out after removing the leaf (Vickery 2010).

Of course, people can and do use plants in all sorts of ways, and leaves are often an accessible way to bring plants into a practice. Ivy appears in Halloween divinations in Herefordshire. Family members wrote their name on an ivy leaf before dropping it into a bowl of water. The following morning, the family inspected the leaves. If anyone’s name had turned into a coffin shape, death was coming for them – and soon (Binney 2018: 133).

The same practice appears in Cornwall on Twelfth Night, and on New Year’s Eve in Hampshire (Inkwright 2020: 88). These prediction-based practices often appear at such times of the year (Midsummer’s Eve being another popular one), with their content being the same even if the time differs.

Elsewhere, in Oxfordshire, girls would load their pockets with ivy leaves before going for a walk. Whichever young man she met first was her future husband (Baker 2011 [1969]: 84).

Meanwhile, if you put an ivy leaf in water on New Year’s Eve, you were directed to leave it until Twelfth Night. A green leaf meant the coming year would be happy, while a black leaf meant illness would blight the year. If the leaf had decayed, it meant you’d die (Baker 2011 [1969]: 84).

In the legend of Tristan and Isolde, the lovers were buried separately, though an ivy vine apparently grew to connect their graves. If anyone cut the vine, it simply regrew to renew the connection (Inkwright 2020: 88). This perhaps explains the superstition that ivy grew best on the graves of those who died of lovesickness (Daniels 2003 [1903]: 807).

In the Victorian Language of Flowers, ivy represented fidelity and marriage. Yet if you sent someone a sprig of ivy, complete with tendrils, it meant ‘assiduous to please’ (Burke 1867: 31).

The Folklore of Ivy at Christmas

Carols praising holly and ivy date back to before the 15th century (Drury 1987: 194). The carol, ‘The Holly and the Ivy’, is considered a medieval carol. Holly, being prickly and supposedly ‘dominant’, represented the masculine principle, while ivy was clingy and pliable, making it feminine (Baker 2011 [1969]: 83). A custom from the Midlands claimed the plant brought into the house first dictated who would rule the household that year. Holly meant the man, and ivy meant the woman.

In the 17th century, people liked to bring holly into the house as a symbol of fertility and fortune, but if holly berries were scarce, ivy sprigs were an acceptable substitution (Drury 1987: 194).

Until the end of the 19th century, people kept holly and ivy until Candlemas when it was burnt, rather than being thrown away, though this varied according to the part of the country (Drury 1987: 195). In some places, the evergreens were burnt on Twelfth Night, or Old Twelfth Night (17 January). Those evergreens not burnt “would turn into pixies and plague the house in the coming year” (Drury 1987: 197).

It wasn’t just at Christmas that you had to be careful what you did with ivy. As we find with other plants, it could be both helpful and a hindrance to your household.

If you accidentally brought it into the house with firewood in Cambridgeshire, it meant bad luck for the household (Baker 2011 [1969]: 83).

Ivy is believed to attract good fortune. Young women in Rossshire would pluck ivy sprigs, still wet with May dew, to bring good luck. They couldn’t cut the sprigs though because touching the plant with steel would negate the good luck (Daniels 2003 [1903]: 807).

If it grows on your house, it protects those inside from harm. It can be used magically to let you see whoever wishes you harm (Harrington 2020: 75). That said, if the ivy growing on your house withered, it foretold disaster. In Wales, the house would pass to someone else (Baker 2011 [1969]: 83).

If you make an ivy wreath and wear it on May Day, you’ll be able to tell good people from bad and see witches (Harrington 2020: 75).

Harrington also notes that if you need to represent a woman in a spell, you’d use ivy, while holly would represent a man (2020: 76). Such was the link between ivy and women that in some counties, people dressed the last harvest sheaf in lace and ribbons, and bound it with ivy, to create the ‘Ivy Girl’. They carried her home to represent prosperity and bountiful yields for the farm (Baker 2011 [1969]: 83).

What do we make of the folklore of ivy?

Like holly, ivy enjoys a link with everlasting life, most likely due to its status as an evergreen plant. Its links with bad luck are perhaps less obvious to determine, unless its association with graveyards (like yew) made it a less attractive plant to keep indoors.

Its protective nature is an interesting one, since it can cause damage to walls. Yet it is one of the few plants to grow on sheltered walls, perhaps protecting north-facing walls from the elements with their abundant foliage.

Ivy has perhaps lost out in the Christmas race to the likes of holly, mistletoe and the pine tree. I’m not sure how many people gather their own greenery to bring indoors, and the plastic varieties likely hold none of the bad luck of their real alternatives. But if you have any ivy growing near you (that’s not in a graveyard), you might want to try the seasonal divination to see what the year ahead brings for you. Just remember – you don’t want your leaf to wither!

Would you bring this evergreen indoors at Christmas?

Daniels, Cora and C. M. Stevans (2003 [1903]), Encyclopædia of Superstitions, Folklore, and the Occult Sciences of the World, Volume 2, Honolulu: University of Hawaii Press 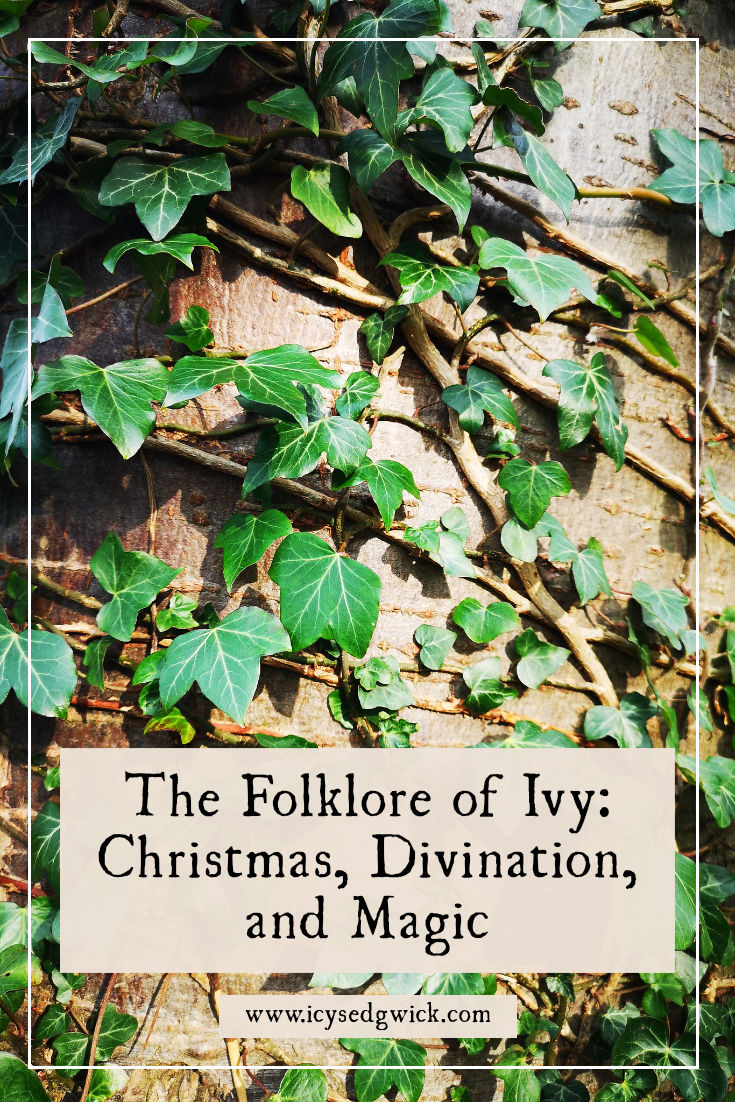