If a bouquet of flowers arrives at our door, we’re more interested in who sent them. The Victorians were more concerned with what it meant. The Victorian language of flowers, also known as floriography, was a way to send messages using specific plants and flowers. Combining different flowers allowed them to send more complex or sophisticated messages. 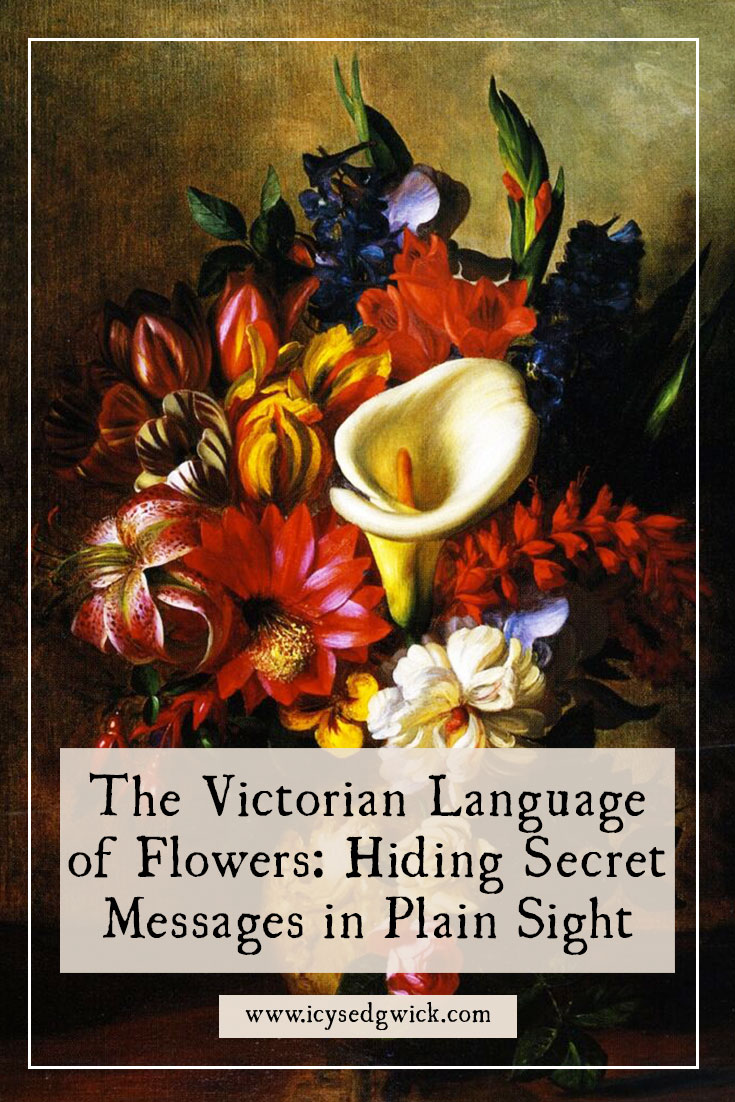 The Victorians were famously ‘buttoned up’, with a strict set of codes that dictated behaviour. Relationships between people were particularly subject to rules, with would-be couples unable to say what they wanted to say. That might even be negative messages. Orange lilies meant both “You are proud” and “I hate you” (Gray 2015: 7)

That said, the Victorians were nothing if not innovative. The language of flowers became a way to pass messages in a subtle, discreet way. I have seen people refer to it as a ‘secret’ language, but I’d dispute this. After all, if people could access lists of flower meanings, it hardly becomes rocket science to decode the message. It was more important as a way to ‘say’ something without saying it aloud or in writing. Floriography is more of a set of gestures than a ‘language’.

In this post, we’ll explore where the language of flowers came from, how it developed, and how you can use it in the 21st century. Keep reading or hit ‘play’ to hear the podcast version of this post.

Who created the language?

It’s difficult to pinpoint a specific creator since flower meanings shifted over time and between countries. No one sat down and decided to ‘invent’ a language based on these meanings.

While not its creator, a key figure in the development of floriography was Lady Mary Wortley Montagu. The wife of the British ambassador, Lady Montagu lived in Turkey in the early 1700s. She wrote letters home about the practice of selam. According to her, this was a way the harem ladies could pass secret messages to their lovers. Rather than sending notes, which could be intercepted, they sent flowers as part of this language (Stott 2016).

Or did they? Many have since noted that selam was a rhyming game, not a secret flower language. Montagu either misunderstood what it was, or she romanticised it for her readers (Stott 2016). Ultimately, she spoke over the people who practised it. History is littered with examples of a story making a better option than the truth. The publication of her embassy letters caught the public imagination. They seized on the idea of sending messages using flowers, especially given its apparently ‘exotic’ origins.

The Language of Flowers Arrives

Romie Stott explains that there was already a fashion in France in the early 1800s to use flower almanacs. These combined images of seasonal flowers with facts or poems. The new flower dictionaries that appeared in 1810 were essentially appendices to these almanacs (2016).

Publishers began printing flower dictionaries, notably one by Louise Cortambert (writing as Madame Charlotte de La Tour) in 1819. In Le Langage des fleurs, Cortambert notes that “the language of flowers was known to the ancients”, and suggests the Greeks sent secret messages through flowers. She also continues the belief in Eastern practices of flowers used as love notes. However, Cortambert added an extra element, saying that “the significations of the different flowers are changed” to help keep the messages secret.

Some of the meanings came from observations about the plants, such as the snowdrop representing hope since it is the first plant to break free of the snow. More meanings came from the legends and lore surrounding the flowers. Sweet violets meant modesty (Burke 1856: 61), after the myth in which the god Apollo pursued one of Diana’s nymph friends, so the goddess turned her into a violet to preserve her virtue.

Others came from their medical properties, such as pennyroyal meaning “you must leave” which came from its use as an abortifacient (Stott 2016). An old medicinal idea known as the ‘doctrine of signatures’ held true that a plant looked like the part of the body it could help. Therefore, walnuts represented intellect since they resembled brains.

Other dictionaries followed, many adding illustrations to the books. Routledge published The Illustrated Language of Flowers, compiled by Mrs L. Burke, in 1856. This dictionary works both ways: the first half features flowers and their associated meanings, while the second half lists common messages and the associated flowers. This makes it easier to decide what flowers to send, or to decode the message.

According to Patricia Telesco, most people consulted a book by Miss Corruthers of Inverness from 1879 (1994: 32). Telesco doesn’t name this book, but a swift Google search reveals it to be Flower Lore: The Teachings of Flowers, Historical, Legendary, Poetical & Symbolical by Miss Carruthers.

Her book is an impressive compendium of flower folklore, combining more in-depth articles about the flowers with a ‘dictionary’ at the back. Each flower comes with its established ‘keyword’, along with its lore.

Telesco makes a good point that the language of flowers doesn’t just contain flowers. It also contains trees, moss, vines, and other plants (1994: 2). This gave people a much larger range of botanical content for their messages. It’s a good job that wealthy Victorians could take advantage of new industrial developments to create hothouses, allowing them to grow all manner of botanical beauties (Stott 2016).

Yet Telesco also says the scents of the flowers alone could communicate a message. She gives the example of a young woman dropping a handkerchief scented with violet to tell a would-be lover that “her admiration would be unwavering” (1994: 32).

But S. Theresa Dietz points out a fundamental flaw with floriography. Given the wide array of meanings for different flowers, it was crucial that both recipient and sender used the same flower dictionary (2020: 6).

The Language of Flowers and Creativity

Floriography also became a way to add symbolism to artistic creations. Flowers mentioned in novels took on new significance, sometimes lost on modern readers. In Jane Eyre, Charlotte Brontë used a list of flowers to help underpin Jane’s feelings. For example, as her time at the awful Lowood school draws to a close, Brontë describes how “flowers peeped out amongst the leaves; Snowdrops, Crocuses, purple Auriculas and golden-eyed Pansies.”

The Pre-Raphaelite Brotherhood, the group of artists who reached back to the apparent purity of art before Raphael, added extra messages to their paintings by including specific flowers. For example, in Frederick Sandys’ painting ‘Vivien’, he includes daphne, which represents coquetry and the desire to please. Yet its toxicity reflects the dangerous femininity of Vivien herself. Again, such meanings may be lost on the modern viewer, but they add a depth to the paintings that can be fun to unravel.

So how did you send a message using flowers?

It all came down to the meanings, which are what makes floriography so exciting – and complicated in equal measure. I might want to tell someone I need my own space, though I’m sad about this, so I might mix heath (solitude) with yew (sorrow). Though I can also send mean messages, with plants like hortensia (You are cold), sweet-scented tussilage (justice shall be done to you), or wild tansey (I declare war against you).

Senders had to be mindful of both the meaning of each flower and its position in an arrangement. The colour of the flower also affected the content of your message. A purple iris meant “You are beautiful” (as well as conveying wisdom) but a yellow iris meant passion (Gray 2015: 80). Choosing the right flower, the right colour, and the right placement was how you ‘wrote’ a sentence.

Not only that, but some flowers had multiple meanings. Samantha Gray gives the example that white lilies meant virginity, majesty, and purity (2015: 7). How to be sure you sent the right message? The recipient needed to look at each flower in the arrangement to work out the bouquet’s context. Only then did the meaning become clear. Plus, as Dietz pointed out, you needed to be sure you had the same meanings dictionary.

Consulting Mrs Burke’s volume makes the flower choice slightly easier since she states the imperial lily means majesty, while the white lily represented purity. Getting specific was clearly beneficial. A casual browse of the flowers available in the Victorian dictionaries is mind-boggling since many plants are unfamiliar today. The decline of the Victorian hothouse no doubt contributes to this issue. But it also makes it difficult to make up a bouquet with Interflora if they don’t sell mandrake.

Even the manner in which flowers were handed over passed on a message. If you handed the flowers with the right hand, your answer was ‘yes’. The left hand meant ‘no’. Even the ribbon was relevant. The symbolism referred to the giver when tied to the left, and to the recipient when tied to the right (Almanac 2022).

What happened to the Language of Flowers?

The outbreak of the First World War largely consigned floriography to history. Cultivating the flowers was too time-consuming and warfare required resources to be used on more helpful things than growing plants (Stott 2016). As social codes relaxed, the need to send secret messages disappeared. That said, English Heritage points out that there’s little evidence anyone actually sent messages using flowers (2017).

Clearly, the Victorians weren’t the first to make associations between flowers and concepts. Magickal and astrological texts associate plants with spirits and deities. For example, William Lilly associated Mars with nettles, brambles, ginger, and hemlock, among other herbs (2004 [1647]: 68). He linked Jupiter with betony, lungwort, marjoram, and violets (2004 [1647]: 64).

Yet it’s still a fun way to show people what you’re really thinking or how you feel, even if the recipient never grasps the message. Though be aware that you might be sending an unintended message. I was once given a bouquet of deep red, crimson roses. While red roses mean ‘I love you’, which was the meaning I had hoped for, dark red roses are a sign of mourning (Almanac 2022). The sender broke up with me two months later.

Perhaps a better use is through gardening. Use the flower meanings to help send a message through what you plant in your garden. As an example, because like I said earlier, the snowdrop meant hope, as did the hawthorn, live oak, also known as evergreen oak, meant liberty, and water willow meant freedom (Burke 1856).

What message would you like to send to the world using the Language of Flowers?

Cortambert, Louise (1835), The Language of Flowers, London: Saunders and Otley.

English Heritage (2017), ‘What Can History Teach Us About the Language of Flowers?’, English Heritage, https://blog.english-heritage.org.uk/what-can-history-teach-us-about-the-language-of-flowers/.