Time is one of those things that we never seem to have enough of. When we’re enjoying ourselves, it zips by too quickly. Yet when you’re stuck in a boring situation, it seems to slow down to a crawl. 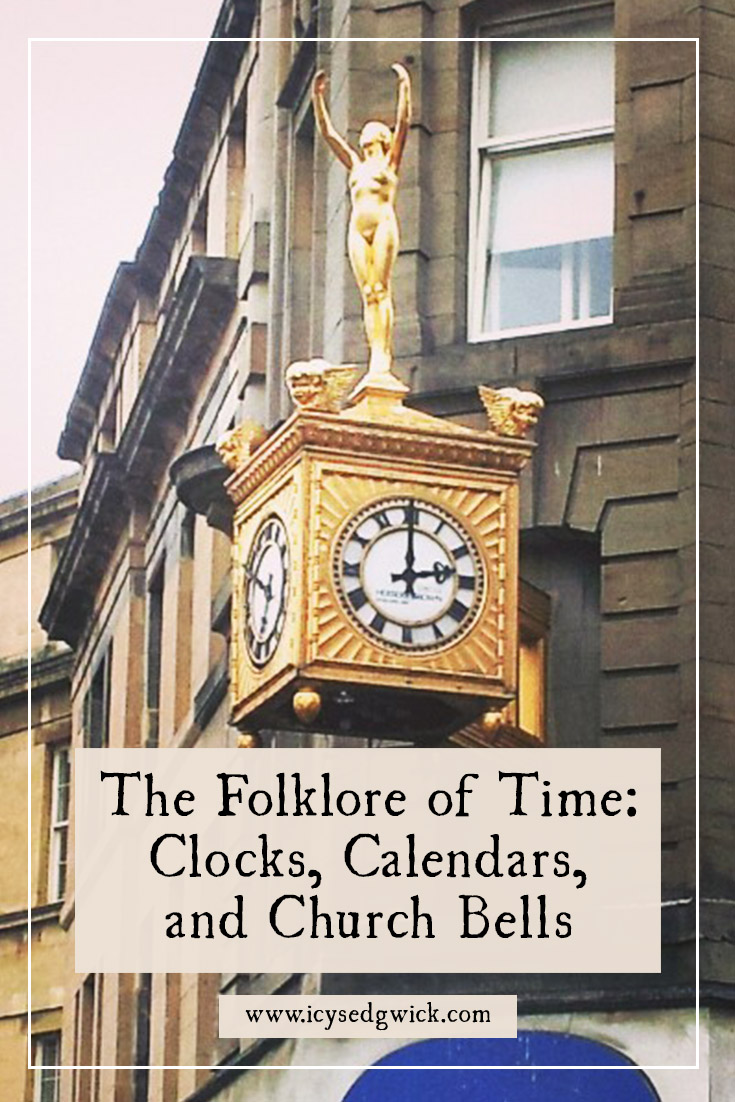 JoAnn Conrad even refers to folklore as “the master narrative of temporal progress” (2014: 323). Its temporality has defined what folklorists collected, from whom, and how they presented it to others. In Europe, the collection of folklore became a way to define the nation state. There was a sense of time-based urgency to collecting it before it was lost.

Indeed, following the way superstitions wax and wane is a way to trace humanity’s progress.

But as I dug into it, the more it became clear it wasn’t going to be so easy to find any true folklore of time. The slavish adherence to the clock is relatively recent, compared to the length of human history. Philosophers will tell you that time is a construct, which doesn’t help with research!

So we’re going to explore the superstitions associated with time through calendars and clocks. We’ll also look at time-based superstitions—and why they occur at the time that they do.

The Fundamental Problem with Time

Time is a funny concept. Without instruments, there’s no specific way to measure its passing. Yes, we can notice the changing quality of daylight. And skilled individuals can even measure the passage of time using the stars. But for the rest of us?

We rely on dividing time into instalments. Weeks, days, months, years—they’re essentially an organisational tool. After all, when you look at old farming superstitions, most of them relate to the season. That’s something you can observe. Who knows what the third week in April looks like? But talking about spring? We can all agree about what the season looks, feels, and smells like in our area.

There’s technically nothing from stopping us following our own measures of time. I might refer to something that happened four podcast episodes ago. A regular listener would be able to follow back four weeks, since they know the episodes come out weekly.

But if I suddenly said something happened four coffees ago? You have no way of knowing how often I drink coffee, and thus no way to calculate backwards to the point I’m talking about. This is why humans have standardised time so that they can function within a shared social experience (Zerubavel 1982: 2).

Enter the need for standard time

Humans have found various ways to measure time throughout the ages. Yet using clocks as the standard measure only appeared in 1780. That’s the point when Geneva chose ‘mean time’ over solar time (Zerubavel 1982: 5). Solar time itself is reliable on the local level but not beyond that. That’s because “it varies by approximately four minutes for every degree of longitude” (Zerubavel 1982: 5). Locally, that’s fine. Everyone’s using the same time. But if you need to travel somewhere that’s 218 miles to the east of your location? That’s a time difference of around 16 minutes.

Even as late as the 1840s, cities and villages ran off their own local time. It was the invention of the British mail-coach service that prompted the creation of a time-based schedule. The post office couldn’t rely on local time, so they had to use a standard time to co-ordinate their efforts. Guards carried timepieces so they could adjust all clocks in the post offices on their routes to Greenwich Mean Time (GMT). This didn’t have a huge impact on anyone outside of the Post Office.

Yet the rise of the railways, with nationwide schedules, prompted the adoption of a standard time (Zerubavel 1982: 6). Add the Industrial Revolution and the move to shift work in factories, and timekeeping became far more important.

But we’ve also been marking time in a much bigger way for longer than we’ve had ‘clock’ time. Let’s look at the calendar.

The original English calendar was the Julian calendar, invented by Julius Caesar. It was a nice idea, but over time, it fell out of sync with astronomical events like the solstices. To combat this, Pope Gregory XIII changed the calendar in 1582. He removed ten days and changed how leap years were calculated. He moved New Year back to 1 January, rather than 25 March.

Catholic countries adopted the Gregorian calendar. Even Dr John Dee recommended that England do something similar in 1583 (Simpson 2003: 43). It took England until 1752 to change its calendar. This is also why the UK tax year still starts on 6 April. It’s because it falls 11 days after 25 March, or the old new year.

Incidentally, calendars aren’t exempt from superstitions. If you get a calendar for Christmas, don’t put it up until 1 January. Likewise, don’t turn calendars to the next month until the 1st of that month. Otherwise, it’s considered that you’re tempting fate (Simpson 2003: 45).

According to superstition, dreaming about clocks can mean you’ll go on a journey soon. They’re also considered a rude present for older people since they symbolise time running out. Why else do you think the Grim Reaper is often depicted with an hourglass?

People believe clocks will stop at the moment their owner dies (Simpson 2003: 70). The first example of this belief seems to date to 1820. A clock in the Houses of Parliament stopped on 27 January at around the time George III died (Simpson 2003: 71). Likewise, if a clock stops on its own, or strikes the wrong hour? This is an omen of death. Broken clocks suddenly chiming are also a death omen.

A news snippet from the Lancashire Daily Post in 1920 even related such a superstition. A man named Peskett went to the Archway Tavern in Highgate, and noticed the clock was broken. He was heard to observe, “Somebody is going to die in this house because the painters have broken the clock”. Soon after, he collapsed, complaining of pains in his stomach, and he died shortly afterward.

If a clock doesn’t stop in the room a person died, you have to manually stop it (Simpson 2003: 71). This shows that time has stopped for that person, and prevents them getting stuck in the world of the living.

There’s a superstition that moving the hands on a clock face backwards invites bad luck. In older times, you could certainly damage the striking mechanism by doing so. But what do you do when you need to move the hands back an hour? It’s now safe to do so since most clocks made in the last 60-70 years are made with Daylight Savings in mind (Gainey, no date).

Obviously, not all clocks take an obvious form. Look at dandelions! The puffball seed heads are often referred to as ‘dandelion clocks’. The number of breaths you need to dislodge the seeds either tells the time, or the number of years until you marry (Simpson 2003: 90).

Church clocks striking the hour during a wedding mean either the groom or bride will die within the year. This doesn’t apply if they’re outside at the time, in which case it’s a good luck omen (Simpson 2003: 71). And if a town clock strikes while church bells ring, this foretells a fire (Simpson 2003: 71).

A reader of the Taunton Courier in 1929 wrote to the newspaper about a Somerset superstition involving the church clock. In their letter, they remarked on a 19th century belief. If the church clock struck while the choir sang in the church service, someone in the parish would die before the next Sunday. Apparently, a gamekeeper had attended church the Sunday before his death. When he got home, he’d told his wife about the clock striking during the choir singing. His prediction that someone would die before the following Sunday meant people believed the superstition to be true.

Many superstitions or beliefs rely on midnight as the time when supernatural beings are most active. I already have a whole article about the witching hour so you can check out the specifics there. But these sayings often specify something will happen at midnight. Part of this is due to the ambiguous nature of midnight. Does it belong to the previous day, or a new day? (Simpson 2003: 237) Is midnight on Tuesday the point when Monday turns into Tuesday? Or when Tuesday becomes Wednesday? This ‘notable’ quality of midnight explains why other customs specify being done at that time. Look at first-footing.

Indeed, for some, ‘midnight’ referred to a period of time, rather than a specific moment. This would be easier to spot due to the quality of the light or the appearance of the night sky.

Meanwhile, sunrise is often a good time for healing. If you needed to pass a child through the split in an ash tree, you did so at sunrise. Likewise gathering May dew to wash your face (Simpson 2003: 361). These superstitions rely on the beginning of a new day rather than a specific time. After all, the specific time will vary from location to location. It’s the event that’s important.

So why are ‘midnight’ and ‘sunrise’ treated as vague periods, and not specific times? This is because prior to families owning clocks, it was harder to pinpoint when these times fell. A church clock would strike twelve, but it wouldn’t strike for sunrise. It’s the quality of this period of time that’s relevant, not the specific moment it occurs.

The Folklore of Time…A Slippery Concept

We need only look at Daylight Savings to understand the slippery concept of time. Looking at ‘sunrise’ as the point that the sun begins to lighten the sky makes more sense than looking at a clock. You’re dealing with what you can observe, not what the arbitrary number on the clock.

After all, if you can change time by moving a clock forwards or backwards by an hour…what is time?