Tunnels seem to accrue more folklore than most. Perhaps it’s because we can’t see where they go when we can only see the entrance. Or perhaps we’ve been so primed by fiction to believe tunnels must lead somewhere that we love the idea of a secret world beneath our feet.

Some tunnel legends are common and appear all over the British Isles, with people attempting to explore them and vanishing during the effort. Others are mere rumours, snaking beneath city centres to connect churches with other buildings.

But is there any truth to these stories? And why do we seem so attracted to legends of tunnels? Let’s examine some examples of these stories to see how they work…

One of my favourite Edinburgh legends involves a tunnel, and according to the legend, it ran beneath the Royal Mile. Many centuries ago, builders working on Edinburgh Castle’s defences found a tunnel where they didn’t expect to find one. It cut down into Castle Rock, with unnaturally smooth sides. Some said the tunnel was fairy work and wanted to cover it back up.

One of the castle’s pipers came over to see what was happening and spotted the tunnel. He ignored the workers’ warnings and headed down into his tunnel with his pipes. The workmen followed the sound of the pipes down the Royal Mile, but the music abruptly stopped at the spot where you now find the Tron Kirk.

They thought the piper must have hit a dead end and waited at the tunnel’s entrance for him, expecting him to retrace his route back up to the castle. When he didn’t reappear, they panicked and bricked up the entrance, convinced some evil must have befallen him. According to legend, you can still hear the bagpipes on quiet nights, tracing the route beneath the Royal Mile until they stop beside the Tron (Matthews 1993: 2).

On one of the ghost walks I’ve enjoyed in Edinburgh, the guide retold the story but replaced the adult piper with a young drummer boy. It somehow seemed more sad thinking of a child stuck in a mysterious tunnel.

Interestingly, the musician in the tunnel reflects a popular legend that reappears in towns all over the British Isles, often with a fiddler replacing the piper. In one version from Wrexham, the myth claims either a cave, a mine, or a catacomb starts near the entrance to Chirk Castle. One legend said that if you found yourself within five paces of the entrance, you’d end up drawn inside, and you’d be lost forever.

A fiddler named Iolo ap Huw wanted to bust the myth and headed into the tunnel one Halloween. He wanted to walk the tunnels while playing the fiddle. Except he was never seen again (Wrexham Council News 2018).

There’s a similar story from Littledean in Gloucestershire. A tunnel apparently ran between a house named Old Grange to Flaxley Abbey, around a mile away. This tunnel is interesting in that part of it did exist. Children would dare each other to go inside. Rumours abounded that either monks or Royalists made the tunnel (Westwood 2006: 290).

There’s a small wood between Flaxley and Littledean known as Fiddler’s Copse. As with the other stories, a fiddler apparently entered the tunnel and walked along it, playing his fiddle so his friends could follow his progress above ground. Near the wood, the music stopped abruptly, and no one saw him again (Westwood 2006: 290). You can find a similar story in West Malling in Kent, where again, the wood is still called Fiddler’s Copse (Westwood 2005: 388).

The other incredibly common type of ‘tunnel folklore’ in British towns is that of the ‘secret tunnel network’. They’re nearly always connected with a town centre church, running beneath buildings in a busy part of the town.

The Bedfordshire town of Leighton Buzzard apparently stands atop such a network of tunnels, if you believe the folklore.

According to legend, they link the cellar of All Saints Church with various buildings on the High Street. Some think they might have been priest holes, built during times of Catholic persecution. Other suggest tunnels used by smugglers, though Josh Bolton notes this is unlikely since Leighton Buzzard is too far from the coast (2022).

Likewise, according to local legend, Wrexham town centre boasts hidden tunnels below. They’re believed to begin under Wrexham Parish Church and then run beneath the town centre (Wrexham Council News 2018).

In some cases, tales of secret tunnels make sense.

Those connected with castles are certainly plausible, either to provide supplies in times of siege or to allow for an escape. The tunnels linked with large houses are often considered to be an extension of the priest hole. These allowed priests to hide or escape during those times when the Crown persecuted Catholics. On a more salacious note, some monasteries were believed to have secret tunnels leading to nearby nunneries (Westwood 2006: 336). You can guess why.

But these town centre tunnels don’t always make sense. Depending on the location, smugglers might build them, but how did they manage to do this without alerting anyone to what they were doing?

Even in my own hometown of Newcastle upon Tyne, I’ve long heard stories of a tunnel connecting the old Bourgoynes pub with St Andrew’s Church. It allegedly let people escape to the church where they could claim sanctuary from the law if they committed a crime. Bourgoynes no longer exists, and the extension of the Eldon Square shopping mall now stands on the site. Even if there was a tunnel, I doubt it leads anywhere now!

Jennifer Westwood and Jacqueline Simpson note the commonality of these stories. In some variations, part of what looks like a tunnel still remains. It turns out to be something very unglamourous like a sewer or part of an ice house (2006: 336). Still, the imagination is a wonderful thing!

Of course, some castles do have tunnels. And in the case of Dover Castle, it has rather a lot of tunnels.

According to legend, a drummer boy met a murderous end in the 18th century tunnels during the Napoleonic Wars, though he now patrols the battlements as a headless spectre. If you hear his drumming, it apparently foretells war (Wright 2014).

People have claimed to see ghosts in World War II garb in the wartime tunnels. Others have heard screaming and cries – which is hardly surprising since those from the Dunkirk landings were brought here.

According to property steward Gavin Wright, one man on a tour of the wartime tunnels suddenly fell to the ground. When he got up, he explained he was fine, but he didn’t appreciate the man walking through him (Wright 2014).

Elsewhere, some tunnels clearly do exist, such as the tunnels of transportation networks. I’ve already got an article about the legends associated with the London Underground.

One such tunnel, Box Tunnel in Wiltshire, has amassed more folklore than most. Isambard Kingdom Brunel built Box Tunnel and a popular legend claims Brunel built it on a particular alignment so the rising sun would shine through it on his birthday, April 9. Great Western Railways tested the theory on April 9 2017. The sun shone into the tunnel, but not all the way through, though considering the sun is in a different position on the same date from year to year, it’s possibly true.

In one urban legend, the UK government hid a whole fleet of steam locomotives during the Cold War, called the UK Strategic Steam Reserve. They could transport supplies around the country in the event of a nuclear attack. Some think the government hid the Reserve in Box Tunnel though there is no evidence that the Reserve ever existed.

Elsewhere, people believed the UK government set up an underground bunker during the Cold War to act as HQ if London became unviable. The so-called Last Train would leave London Paddington and head to Box Tunnel in the wake of nuclear attack. While there was a government bunker to the south of Box Tunnel, the second tunnel in the area believed to be home to this hidden train station lay to the north.

Naturally, Box Tunnel even boasts its own ghost. Four men were working inside the tunnel at the eastern end in 2011. They heard the sounds of a woman moaning at the mouth of the tunnel. One of the men shone his torch up the hill and they spotted a woman looking down at them. She wore a nightdress and disappeared as they looked up at her. She had been seen previously by a group of six men but no one knows who she is or was.

If you’re interested in such railway folklore, I have a whole bonus episode about railway legends available to Patreon supporters!

What do we make of this folklore of tunnels?

The problem with some of these tunnels is we don’t know if they existed or not. Without evidence either way, it’s tempting to assume there must be some truth to the rumours.

The Brownhills Bob blog makes an excellent point about the likelihood of secret tunnels, since they’re not that easy to build, they’re expensive, and depending on when they were built, the technology might not have been up to it (BrownhillsBob 2018). From a rational, financial, and practical point of view, it’s unlikely the tunnels exist where there is no evidence for them.

Then we have the tunnels such as those beneath Dover Castle, or the Box Tunnel. The question here is not whether the tunnels exist, since we know they did, but what happened in them. It’s perhaps unsurprising that legends and conspiracies combine to add flavour to the history of these spaces.

In many ways, the legends around these tunnels are marvellous indicators of human imagination, and until we can prove either way if the tunnels exist, or what they’re rumoured to contain is correct, all we will have to go on are the stories.

What’s your favourite example of the folklore of tunnels?

Westwood, Jennifer, Simpson, Jacqueline (2005) The Lore of the Land: A Guide to England’s Legends, London: Penguin. 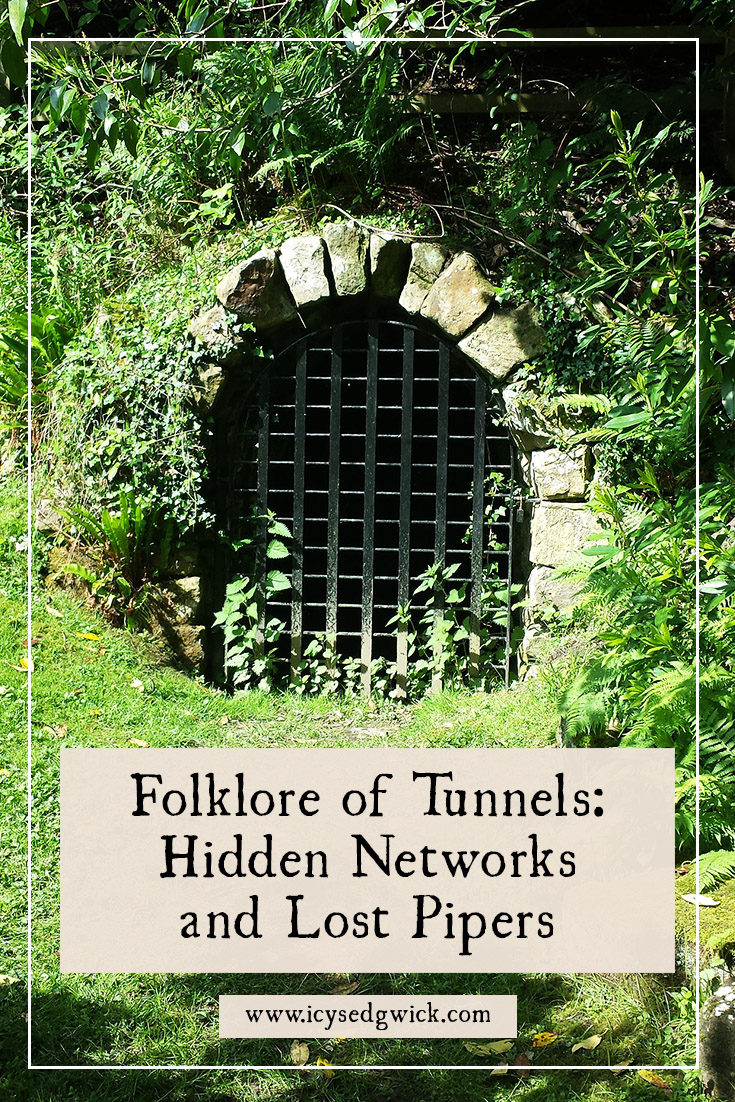