When you live in a rainswept, often foggy, sometimes melancholy part of the world like the UK, it’s so much easier to see phantoms at every turn. From ghostly monks and nuns, to spectral children and the ubiquitous White or Grey Lady, it would seem the spirits are everywhere. 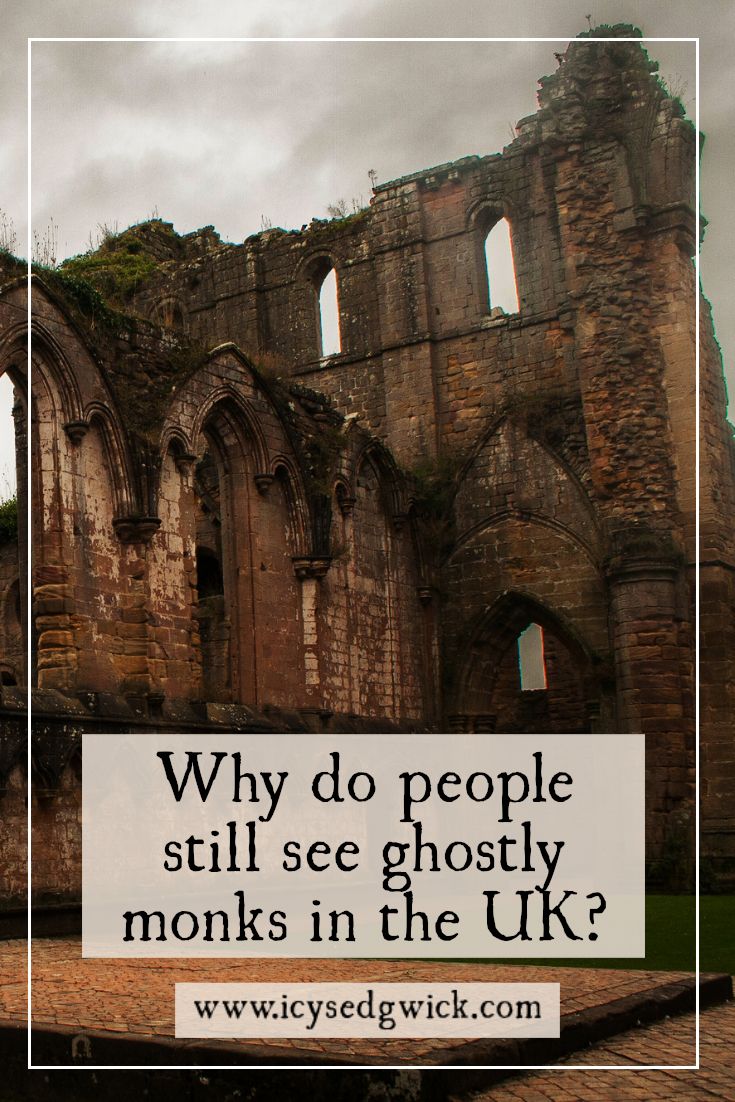 But monks still make up a large proportion of reported sightings. According to Owen Davies in his excellent book The Haunted: A Social History of Ghosts (aff link), a phantom abbot haunted the ruins of Buckfast Abbey in Devon for 300 years. Only the construction of a Catholic church on the site in the 1920s seemed to keep him happy (2007).

The word ‘ruins’ is probably the key here. The Dissolution of the Monasteries between 1536 and 1541 boosted King Henry VIII’s court coffers and helped kickstart the nation’s conversion to Protestantism.

But it also led to the imprisonment and deaths of many monks. Removed from their homes and life purpose, they seem to cling on many centuries later, still wandering familiar routes through the remains of their cloisters.

It was also an incredibly violent period. A common theory for the existence of ghosts is that the energy from a violent event imprints itself on the surrounding environment. It would certainly help to explain why so many monks appear through ghost sightings.

Let’s hurry after them and learn a little more about the ghostly monks of the United Kingdom. Hit ‘play’ to hear the podcast episode or keep reading!

The Ghostly Monks of Newcastle upon Tyne

I live in the capital of the North so naturally, I’m starting my investigation here. This fair city originally housed White Friars, Black Friars, Grey Friars, Austin Friars, and Benedictine nuns. The convent stood where the Grainger Market now stands, while the Grey Friars’ monastery was on Pilgrim Street. Part of the Black Friars monastery remains behind The Gate. Where better to find ghostly monks?

According to legends shared by Vanessa Histon, secret underground passages linked the monasteries of the Black and Grey Friars with the nunnery, St Bartholomew’s. In true Gothic fashion, a nun and one of the Black Friars monks made good use of them. When she fell pregnant, the truth came out about their saucy affair. As a punishment, the Mother Superior walled her up alive in the convent. Some still see her walking a nearby alley, Nuns Lane (2000: 7).

No evidence exists around the monk’s punishment for his part in the affair. That said, there have been sightings of a ghost in the cloisters of nearby Black Friars. The ghost disappears through a wall (Histon 2000: 7).

If we make our way just down the road to the old Co-Op building, now a Premier Inn, we find more tales of spectral monks. The current building dates to the 1920s, but the cellars are those of the previous building on the site. Cellar 9 was said to be haunted by a ghostly monk. Staff hated going into the cellar, especially alone. They reported feeling someone standing behind them, shadows, and excessively cold spots (Histon 2001: 22). Given the proximity to the Black Friars complex, could he be a Black Friar himself?

Meanwhile, a Co-Op office on the second floor of the building overlooked St Andrews’ Street. At the time, this narrow lane was called Darn Crook. Workers would hear a distinct knock on the door to the office though there was no one there. The office stood at the top of a flight of stairs, so there was no chance it was a sound from someone passing by (Histon 2001: 20). Incidentally, a warehouseman once reported seeing a man in what appeared to be a dark coat going up the stairs, only to disappear at the top (Histon 2001: 22).

I have to wonder in these ghostly figures continue to wander around the hotel that now occupies the building.

Not all ecclesiastical ghosts potter about their local abbey ruins.

The house in question is 30 East Drive, on the Chequerfields Estate. The Pritchard family moved into the house in 1966. That’s two parents, their 15-year-old son, and 12-year-old daughter.

Add sightings of a black-robed figure to the list and the family grew terrified. The parents even saw a cloaked shadow floating over their bed. The police, a vicar, and a local MP all witnessed the events.

A paranormal investigator, Tom Cuniff, looked into the history of the local area. According to him, the town gallows originally stood across the street from the house. One of the victims of the gallows was the Black Monk, a 16th-century monk hung for raping and murdering a young girl. Cuniff came to believe the entity was the Black Monk, attracted by the family’s 12-year-old daughter.

It’s difficult to tell. True, the events inspired the rather insipid 2012 film When The Lights Went Out.

But ghostly monks don’t often make objects appear out of thin air or leave bruises on the neck of a teenaged girl. Sources claim that using holy water in the house ‘angered’ the entity. It apparently painted upside down crosses on the walls.

(I feel I should interject at this point. Why would a monk have a problem with holy water?)

The disturbances ceased after two years when the daughter reached 14. Had she passed the point at which the Black Monk lost interest in girls?

These narratives about ‘monks gone bad’ seem to derive from the Reformation. During this period of religious tumult, there was a real desire to besmirch Catholics. Popular literature depicted monks acting in depraved or licentious ways to justify their treatment at the hands of the Reformation (Davies 2007: 165). Matthew Lewis’ famous novel The Monk (1796) updates these tropes for a Gothic audience.

Sometimes it feels like these narratives persist in the popular imagination through ghost stories.

Many discussions of English hauntings naturally turn to Borley Rectory, Essex. It’s the site for stories of ghostly monks and nuns. Allegedly built on the site of a Benedictine monastery, a fire destroyed the Rectory in 1939.

I do have an extended Fabulous Folklore episode about Borley Rectory, where we do dig into its history and what went on! You can get access by becoming a Patreon supporter at the £3.50 tier. And you’ll also get access to episodes on the Highgate Vampire, the village of Pluckley, the legend of Azzurrina, and the Glasgow Vampire! Become a member of the Fabulous Folklore Family to hear the Borley Rectory episode!

But let’s have a potted history for now.

One of the legends explains ghostly monks in the property and adds spectral nuns into the bargain. The Benedictines built their monastery on the site in 1362. One of the monks fell in love with a nun from a convent 7 miles away. They planned to elope but, being discovered, ended up in the hands of their elders. The monk was hanged and they bricked the nun up, alive, in the underground vaults.

Sounds like the ghostly monk and nun of Newcastle. There’s definitely a trend in these stories…

Most sightings involve the nun. According to one legend, the occupants bricked up the dining room window to stop her ghost peering in at them. But one story recorded a sighting of the monk and the nun crossing the grounds. If true, it’s nice to know they got to be together in the end.

The sightings ramped up after 1927 when one of the owners died in the Rectory. Reverend Lionel Foyster and his wife recorded over 2000 poltergeist phenomena between 1930 and 1935.

The famous investigator Harry Price even looked into the case. I won’t sport with your intelligence about the veracity of his methods. While he reported no ghostly monks, a journalist saw the nun.

Authorities demolished the gutted Rectory in 1944. But at the point the photo was taken, a brick appears to levitate in a doorway. Was it thrown by a nearby workman, or lifted by unseen hands? (Hint: Most people think it was the former – but you can find out in the exclusive episode of Fabulous Folklore!)

A photograph taken in 1996 near the Rectory’s graveyard appears to show a monk in the background. So maybe ghostly monks still patrol the grounds.

So why do we have these ghostly monk sightings in the UK?

I think we have three reasons. First, a monk is easily recognisable. If you saw a man in a suit, you’d have no clue what his profession was. But a monk? The bald head and habit are a dead giveaway. This is the approach Davies takes:

The ubiquity of ghostly nuns, monks, Roundheads and Cavaliers is due considerably to the fact that they are easily recognisable by their habits and headgear. So clothes identify the period and the period provides the reason for the haunting”

Second, the presence of monastery ruins helps tie a monk to a specific place. Thanks to the Dissolution of the Monasteries, some of the monasteries are now ruins, like Jervaulx Abbey, Finchale Priory, or Whitby Abbey. As tourist attractions, all of those extra visitors mean more people are likely to see any ghostly monks on site.

And with so many stories of ghostly monks, people are more inclined to see them in the first place.

Other monasteries, like those in Newcastle, exist either in tiny fragments (like Black Friars) or not at all. Buried under office blocks, leisure centres, hotels, or schools, the figures associated with the monasteries appear in seemingly unusual places. In the 1970s, a nun wearing horn-rimmed glasses used to appear in a shop on Newcastle’s Pilgrim Street. She’d smile at customers before disappearing (Histon 2001: 20).

Third, monks are creatures of habit (pardon the pun). With their lives dictated by prayers and other routines, they’d trudge the same routes around the grounds every day. It’s unsurprising that their spirits would continue to do the same.

There we have it! Now over to you. Have you seen any ghostly monks?