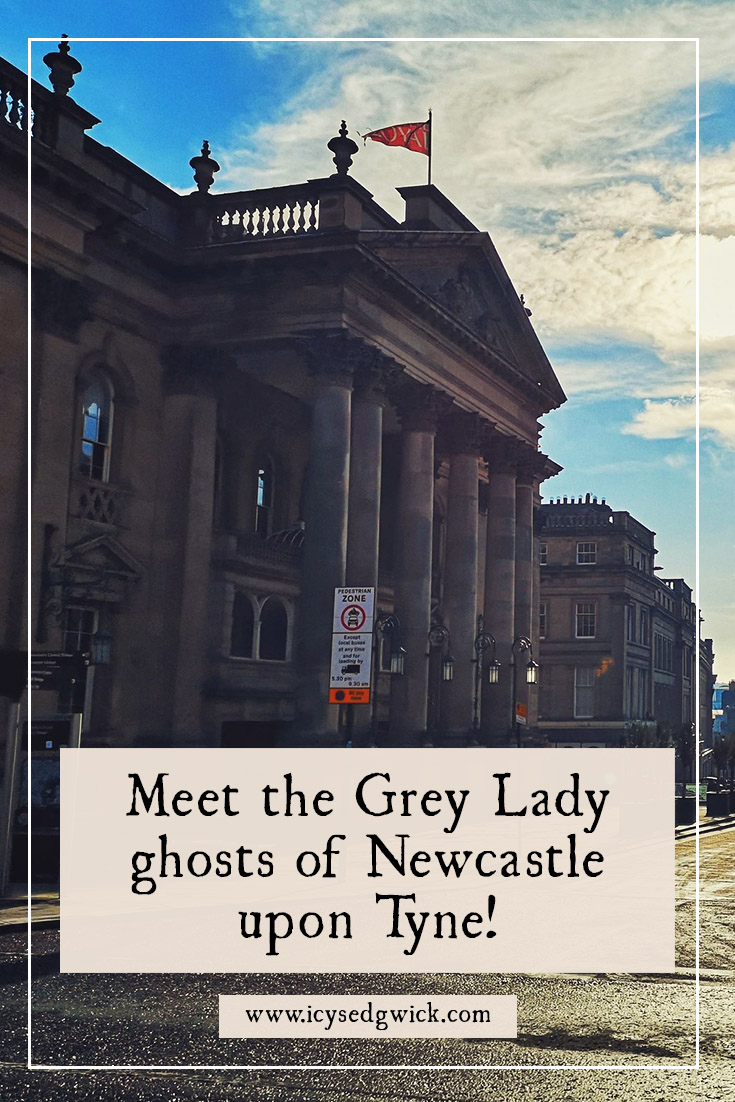 I don’t know if that’s true, but Newcastle upon Tyne would appear to have its share of spectral figures wandering the corridors of its buildings. There are tales of Grey or White Ladies in the neighbouring county of Northumberland, but the Grey Ladies in question inhabit buildings right in the city centre.

Jane Austen and her ilk immortalised the assembly rooms of towns such as Bath. The buildings also hosted “marriage markets” where rich parents tried to marry off their children. It’s amazing that the assembly rooms in Newcastle were used for ‘wedding fairs’ before the pandemic!

Newcastle’s Assembly Rooms are located in a fabulous Georgian building on Fenkle Street, a stone’s throw from the Central Station. Designed by William Newton, they opened in June 1776, on Midsummer’s night (surely a magical night, if ever there was one!). The inscription on its foundation stone, laid in 1774, reads “Rooms dedicated to the most elegant recreation”. The nobility, gentry and other well-to-do citizens raised the funds necessary to build the assembly rooms.

In the past, the assembly rooms have hosted concerts by Strauss, Liszt and Rachmaninov. Charles Dickens’ amateur theatre group staged three playlets here. Royal visitors have included Edward VII, George VI, and Elizabeth II. The army requisitioned the building during the First World War, though it fell into disuse in 1967 and remained derelict until 1974. The Michaelides brothers saved it from demolition and restored the Grade II* listed building to its former glory.

Vanessa Histon relates the legend in her book Ghosts of Grainger Town. According to the story, on December 31, 1777, a rowdy group of wealthy men gathered to celebrate the New Year. The drink flowed and the behaviour grew increasingly bawdy. Eventually one of the young men ordered his wife to dance naked for his friends. This being the 18th century, she did as he demanded.

Sadly the shame and embarrassment were apparently too much for her to bear. She trudged up the stairs to the musician’s gallery in the ballroom and threw herself down to the floor below. This might sound a little melodramatic, but social standing was everything to the upper classes in the 18th century. She clearly felt her reputation would never recover.

Staff at the Assembly Rooms report hearing the rustle of a taffeta ball gown—as people have said before when I’ve related this tale, when did she get dressed again? The Grey Lady also often announces her presence with the scent of lavender. The double doors open and close by themselves, despite being too heavy to be blown open. People have reported feeling a cold spot or a mysterious presence in the area where she’s believed to have fallen to her death.

On Halloween in 2000, unexplained noises and knockings terrorised Alan Robson’s radio crew trying to record a special episode about the haunting. Another group of investigators experienced changes in temperature, balls of light that moved on their own, and electronic equipment that turned itself on and off (Histon 2001: 13).

The fact she announces her presence with rustling also makes her a form of Silky; a female ghost associated with sound. As you can imagine, it’s the sound of silk skirts. William Henderson describes a silky as being similar to a brownie through her tendency to tidy houses during the night (1879: 269). That said, in other tales, the silky is the ghost of a woman who died suddenly (1879: 270).

The only real common point is the use of silk to create auditory phenomena, though as Henderson puts it, these traditions come from a time when silk was uncommon, making it stand out to people (1879: 270). Clearly, silk wouldn’t have been uncommon among the elites visiting the assembly rooms, though it is uncommon for those in more recent times. By comparison to the earlier silkies, this particular Grey Lady just seems to roam around the building.

Research into her identity has proved fruitless and there is no way to substantiate the legend. I checked through the newspapers available on the British Newspaper Archive and can find few articles about the Assembly Rooms, and none about any events in December 1777. True, the well-to-do may have kept the scandal from the papers, but without a name to trace, it’s impossible to know if the legend is true. It’s also difficult to find first-hand information about the 2000 investigation, making it hard to verify reports as to what they experienced.

Still, if the story is true, then it’s an incredibly sad one. It’s also infuriating since it’s unlikely the woman’s husband was ever brought to account for the part he played in his wife’s death.

Yet the Assembly Rooms are not the only grand building in Newcastle that apparently plays host to a Grey Lady. The Theatre Royal on Grey Street also appears to lay claim to one. According to local folklore, staff have reported seeing her in the theatre. This is a notable point since it’s impossible to find any sightings reported by theatre-goers.

Vanessa Histon relates the most common ‘back story’ (2000: 9). This version gives her identity as a young woman who had been having an affair with an actor starring in a play in the 1880s. He led her to believe that they could run away together once the play finished its run. On the last night of the run, she turned up at the theatre with her things, all packed and ready to elope.

Seeing her so eager, the actor asked her why she’d brought her things along. When she told him she was excited to elope, he laughed in her face. The cad finally admitted he’d never planned to run away with her at all.

Again, it’s hard to substantiate the legend. No one knows who she was, or indeed who the actor was. Histon does note that the theatre’s archives show the boxes were closed in the 1880s because someone fell from one (2000: 9). She theorises that someone invented the tale of a jilted lover and moved the location from the boxes to the higher gallery.

Sightings of the Theatre Royal Grey Lady are hard to find since it seems only staff have seen her, so it’s difficult to know how ‘true’ the story is. One report involves a stage electrician popping into the gents to see a woman standing there. He closed the door, thinking he was in the wrong WC. When he realised he wasn’t, he reopened the door and the woman vanished (Histon 2000: 10). Another workman reported hearing strange noises coming from the box above him. When he went to check, the chairs had all been overturned. Eventually, he locked himself into the box he was working and turned his radio up (Histon 2000: 10).

Another problem with this particular tale is that a very similar one also exists about the Tyne Theatre on Westgate Road. While the details are scant, with some versions saying she threw herself from the gallery and others saying she fell by accident, the common point is that the Grey Lady died after falling from the gallery. With two very similar stories at two theatres in the same city, we have to exercise caution.

It’s possible the story actually happened at the Tyne Theatre and was relocated to the Theatre Royal. Or it’s possible someone mixed up the theatres in the retelling of the story, and it stuck. With little evidence, it’s hard to know for sure.

Either way, it seems Grey Lady ghosts are inextricably linked with sadness. In these cases, despair and shame play a part in the unnecessary deaths of young women. The women in the stories receive no respect in life, and endure a half-life in the shadows in death.

If these stories are true, it does make me wonder how the ghosts feel now. The Assembly Rooms closed in 2019, and thanks to the pandemic, the new owners haven’t reopened. Does the Grey Lady still drift from room to room, leaving the scent of lavender in her wake?

And did the Grey Lady of the Theatre Royal get lonely during lockdown? Did the ghost light, the single light left burning to keep ghosts at bay, keep her in the shadows? And what does she make of plays like The Woman in Black?