From cleaning wounds to repelling plague, lavender has had a myriad of uses throughout the centuries. It’s now quite a common garden plant in the UK. 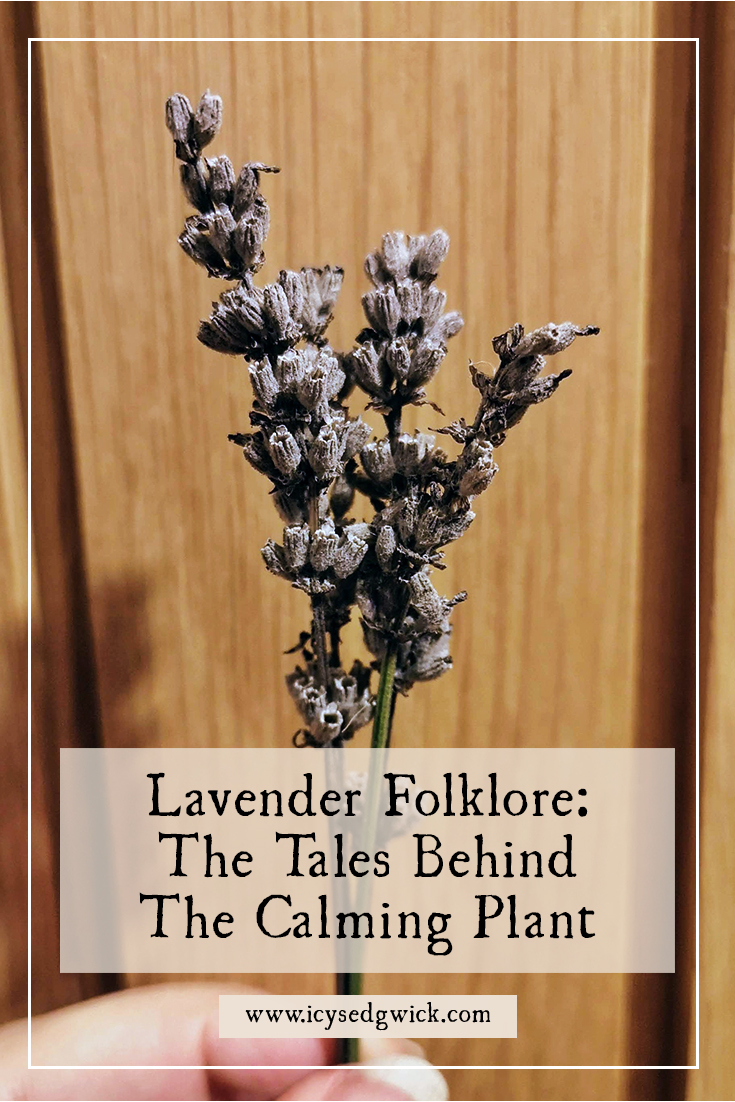 It was ancient Arabia that first farmed the plant and distilled its oils. But it was the Romans that brought it to England.

The Romans even named lavender, after their word meaning ‘to bathe’, lavare. Those clean-living expansionists steeped bundles of the herbs in their bathing water (Binney 2018: 36). The Romans spread its use throughout Europe through their bathhouses (Gray 2015: 112).

In this post, we’ll explore some of its folklore via its appearance in ancient folklore, medicinal uses, and even its magickal uses. Keep reading or hit play to hear the podcast episode version!

The plant pops up in ancient history and the Bible alike. According to KatKnit, Cleopatra used its fragrance in her grand seductions. It’s even claimed the asp that killed her hid among her lavender bushes (2014). When Howard Carter opened Tutankhamun’s tomb, he found lavender that still bore traces of its fragrance (Perry 2019).

When God kicked Adam and Eve out of the Garden of Evil, they took lavender with them. Though given how many purposes it has, that was an intelligent choice on their part.

When a woman washes Jesus’ feet, the lotion she applies contains lavender. His mother Mary hung his swaddling clothes on a lavender bush and apparently transferred his scent to the plant. Lavender came to represent cleanliness and purity as a result (Gray 2015: 112).

It’s so popular in the Bible that Christians even made crosses of lavender to protect themselves from evil.

The Medicinal Uses of Lavender

Nicollete Perry describes lavender (Lavandula angustifolia, syn. L. officinalis) as “a queen of medicinal plants” (2019). Indeed, she points out that there is abundant scientific evidence to show that lavender can:

The essential oil possesses antiseptic properties. Apparently, it can even “kill typhoid, diphtheria, streptococcus, and pneumococcus bacteria” (Our Herb Garden 2008 – 2022). It even found use as an antiseptic during the First and Second World Wars (Gray 2015: 112).

In days gone by, people burnt bunches of dried lavender and left them to smoulder in sickrooms to help fumigate the room (Our Herb Garden 2008 – 2022). Or you can buy sachets containing the dried herb to help keep pests away from your clothes. King Charles VI of France used lavender-stuffed cushions in his palace in 1387 to deter moths (Baker 2011 [1969]: 89).

This multi-purpose plant aids healing and even works as an insecticide. Abbess Hildegard of Bingen in 12th century Germany used it to kill fleas and head lice (KatKnit 2014). Clinical studies have actually shown that applied topically, lavender helps treat lice and fleas (Perry 2019).

Midwives gave pregnant women bunches of lavender during labour. Gripping the sprigs would release the scent and give them courage (Gray 2015: 112).

We shouldn’t use lavender as a panacea though. Used topically, it can irritate sensitive skin. Regular use can also disrupt hormones too (Perry 2019). It’s important not to overuse any oils. Please consult your physician if you’re pregnant or breastfeeding before you use lavender oil.

Lavender and the Mind

I use lavender myself. It’s one of the 3 ingredients in my homemade massage oil. It’s brilliant at taking the edge off a tension headache. This has a precedent since lavender oil on the temples, or drinking lavender tea, could treat headaches (Our Herb Garden 2008 – 2022).

In Mediterranean countries, people avoided sunstroke by weaving lavender into their hats (Our Herb Garden 2008 – 2022). It’s more likely the hats kept the sun at bay so they didn’t get headaches. But keeping lavender so close would be a nice way to spend the day.

Abbess Hildegard of Bingen mixed lavender with brandy and gin to make a migraine cure (KatKnit 2014).

But Thomas Culpeper recommended it for both physical and emotional ailments (Gray 2015: 112). Lavender’s gentle scent has become famous for its ability to improve symptoms of depression.

Controlled scientific trials have shown that lavender lowers anxiety and promotes calm in those with generalized anxiety disorder. In fact, its results are “comparable to conventional drugs for anxiety” (Perry 2019). One controlled study shows it was comparable to paroxetine, used to treat depression (Perry 2019).

According to Margaret Baker, lavender “is said to make lions and tigers docile” (2011 [1969]: 89). Though I’m not sure I want to be the one to try that one out. It does attract bees though so it’s great if you want a bee-friendly garden. Much like fuchsia, the plant is a fairy favourite.

Nowadays, lavender appears in perfume. The reason it appears as such is a bit of a strange one and to find out why, we must head to Marseille. Four grave robbers plundered graves during a plague outbreak. When caught, they claimed they’d used lavender to protect them against contracting the disease (2016).

I’d pay good money to see an advert for that at Christmas, possibly starring Brad Pitt.

There is an alternative version that sees the thieves invent the vinegar after being sentenced to bury plague corpses (Our Herb Garden 2008 – 2022). Either way, the intention is the same: to use lavender (and the other ingredients) to stave off the plague.

But in 1709, Italian perfumer Giovanni Maria Farina moved to Cologne. He used the tale as inspiration and added lavender to his new scent, Eau de Cologne (Laws 2016: 123). This use of lavender within the vinegar perhaps explains why lavender also came to represent distrust, self-preservation, and thievery (Dietz 2020: 126).

L for Lavender and love?

Lavender has long been associated with love and romance. This helps to explain the famous rhyme:

Tudor girls made lavender tea to help them see their future husbands. They’d drink it before bed, asking St Luke to bring a vision of their ‘true love’ in their dreams (Our Herb Garden 2008 – 2022). You could also scent your clothes with lavender to attract love (Dietz 2020: 126).

Girls hid sprigs of the plant under the pillows of their beloved to help them think loving thoughts (Binney 2018: 27). It possibly explains why newlyweds stuffed lavender into their mattresses to help encourage marital bliss. People also give sprigs to newlyweds to bring them luck (Dietz 2020: 126).

I can’t help thinking the scent would be more likely to encourage a good night’s sleep. And people who aren’t sleep-deprived are generally better-tempered, so…

Girls carried the plant to help ward off unwanted advances. But married women used it to help inflame their husband’s passions. And just to add further confusion, sex workers also used it to snare customers. They believed the plant guarded against cruelty (Our Herb Garden 2008 – 2022).

That’s a lot of mixed messages from a single plant.

There have been no studies to investigate the ability of lavender to help with social bonding or romance (Perry 2019). Anecdotal evidence will have to do!

Mix it with mugwort, chamomile and rose to attract fairies, elves, or brownies on Midsummer’s Eve.

Or use it as a tea to increase your clairvoyance.

One old belief said that inhaling lavender scent gave you the power to see ghosts (Gray 2015: 112).

Use it in spells for boosting brain power or to encourage fertility. Add rosemary for the former for an extra oomph.

Mix it with basil, lemon balm, thyme, rue, and frankincense. Burn the mixture in your house (if you make incense) to protect your home. Or you can mix the oils and wear it as a scent. Just make sure you mix them in a base oil like coconut oil or almond oil so you don’t end up with a chemical burn.

Whatever you do, it’s worth finding a way to bring this wonderful plant into your life! Whether you use the oil to repel headaches or use the dried herb to deter moths, it’s a fantastic plant to keep around.

Do you use lavender in your home, or grow it in your garden?