Lighthouses descend from an ancient concept. The ancient Egyptians, Phoenicians, and Greeks built towers to house beacons. Over time, these buildings developed to include more technology.

They either mark dangerous places for rocks or guide ships into safe harbours. For example, the lighthouses on the north and south piers mark the entrance to the river Tyne. The piers also help to guide any ships away from the Black Middens, a dangerous rock formation at the river mouth. 5 ships wrecked on the rocks in just 3 days in 1864.

But lighthouses are strange places at the best of times. They’re often isolated from the mainland. We can only reach them at low tide, making them very lonely places. Lighthouse keepers lived there, except lighthouses are workplaces, which undercuts any sense of domesticity.

But lighthouses can be ultimately creepy places. Just look at the film The Lighthouse. So in this instalment of our Folklore of the Sea series, let’s check out some lighthouse legends.

This sad incident greatly impacted how lighthouses worked around the British Isles.

We travel back to 1801. Thomas Griffith and Thomas Howell worked at The Smalls Lighthouse, 20 miles off the Pembrokeshire coast. The lighthouse was built in 1776 on The Smalls rocks (Harries 2020).

By all accounts, the men hated each other. They often fought and people knew of the animosity.

So Howell ran into a problem when Griffith was in a freak accident and became unwell. He had no means of calling for help, and weeks later, Griffith finally died. Panic gripped Howell. What should he do? He didn’t want to bury the body at sea since people would no doubt accuse him of murdering Griffith.

At first, he tried to keep the body in the lighthouse. With no means to preserve the corpse, it began to decompose. The smell would have been overwhelming.

Howell next built a coffin and tied it to the rocks. He placed Griffith in the coffin and continued to man the lighthouse on his own. But the waves battered the coffin on the rocks, breaking it open. Griffith’s arm seemed to wave to Howell with the movement of the sea.

Most people think Howell spent three weeks alone at the lighthouse with just a corpse for company. The isolation and what happened badly traumatised him, leaving him almost unrecognisable by the time his replacements relieved him.

After that, three men needed to man a lighthouse, not two. Plenty of lighthouse legends grew up around the tragedy. In some, ships pass the lighthouse, blithely unaware of the traumatised state of the lone lighthouse keeper. In others, boats pass close enough to see Griffith’s waving arm (Harries 2020).

The Flannan Islands lie in the Outer Hebrides. Among them lies Eilean Mor, where you’ll find a remote lighthouse. It’s at the centre of one of the oddest lighthouse legends in the British Isles.

Now, supernatural goings-on appear in the history of the island, before we ever reach the lighthouse. St. Flannan, a 6th-century Irish bishop, once built a chapel on the island. Shepherds would let their sheep graze on the island, but never spent the night there. Spirits apparently haunted the spot, and they didn’t want to encounter them.

On 26 December 1900, Captain James Harvey took Joseph Moore to the lighthouse. They’d had reports that the light had gone out on 15 December. They drew near in their vessel, yet no one waited for them on the landing platform.

Captain Harvey blew the horn and even fired a flare to let the keepers know they’d arrived.

Moore left the ship and climbed the steps to the lighthouse. He later described feelings of foreboding as he did so (Johnson 2016).

Moore reached the lighthouse and discovered the door unlocked. Only one coat hung in the entrance hall, rather than three. He found half-eaten food and an upturned chair in the kitchen. The clock had stopped.

He couldn’t find them anywhere in the lighthouse. Captain Harvey ordered a search of the islands yet the missing men had vanished. According to the signs in the lighthouse, they must have been gone for about a week.

Were There Any Clues?

Only the lighthouse log seemed to yield any clues. One entry on 12 December described horrific winds, the quiet mood of the principal keeper, and that an assistant had been crying. The log continued to speak of a violent storm, although they were quite safe in the new lighthouse, and no one reported any storms in that area until 17 December (Johnson 2016).

No one could work out why William MacArthur, one of the keepers, had gone outside without his oilskin coat, especially in December. The rules forbade all three to leave the posts together.

Eventually, the investigation concluded they’d been trying to retrieve a supply crate when a wave washed them out to sea. The smashed open supply box on the western landing platform seemed to explain it. It seemed two of the keepers had gone out, and when they didn’t return, MacArthur had ventured out (Perry n.d.).

But this explanation didn’t cover why he went out without his coat, why no bodies ever washed ashore, and why there were any waves on a sea that was calm.

Nor did it explain the logbook entry from 15 December, saying the storm had passed. There was no mention of any keepers being swept out to sea, so the accident must have happened after someone wrote the entry. But if that was the case, then a wave couldn’t have swept them off the rock on a calm sea! (Perry n.d.)

Other theories abounded. Some thought they’d left the island to avoid repaying debts. Others thought they’d been kidnapped by spies or eaten by a sea serpent. Another story saw them kidnapped by a ghost ships’ skeletal crew. Since then, keepers reported hearing voices in the wind.

Mike Dash did his own investigation and found the logbook entries might have been a red herring. They only appeared in the story several years later. Dash discovered there was no evidence they ever existed (Perry n.d.).

Some think MacArthur started a fight and all three fell to their deaths. Others think he killed the other two and then threw himself into the sea. But without evidence of a fight or a murder, this remains one of the eeriest lighthouse legends.

People disagree over who first built the lighthouse. Popular theories name either Raymond LeGros, who apparently built a tower here in 1172, or William Marshal, Earl of Pembroke, who built the lighthouse in 1245 (Kerrigan 2016: 35). That said, there has been some sort of beacon here since the fifth century.

Monks tended the lighthouse until 1641, though they abandoned it during the English Civil War (Kerrigan 2016: 35). There are rumours their remains are entombed in the walls, but I’m not sure what the evidence for this is. Other folklore claims only one monk lies within the walls.

According to legend, William Marshal still haunts the site. He’s believed to spend time in the tower where he can keep watch. Witnesses report seeing a monk walking at the base of the tower. Is it the monk whose body lies within the walls? You decide.

Another legend explains that the phrase ‘by hook or by crook’ came from the lighthouse. In the mid-17th century, Oliver Cromwell vowed to take Waterford in Ireland, either by approaching from the east (by Hook) or the west (by Crooke). The Hook Lighthouse would have been pivotal to this approach. That said, the first recorded use appears in a document from 1380.

Souter Lighthouse stands on Lizard Point in Marsden, 3.5 miles from the mouth of the River Tyne. The visibility is better than it is at Souter Point, but because there was already a Lizard Lighthouse in Cornwall, they called it Souter Lighthouse.

Built in 1871, Souter Lighthouse is also the first one ever built for electric power. It’s now run by the National Trust.

It’s considered one of the UK’s most haunted lighthouses. One ghost is believed to be Isobella Darling, niece of Grace Darling. According to the 1881 and 1891 census records, she lived at Souter, though no one knows why she would haunt the lighthouse (Northern Echo 2002).

I should point out that it was Derek Acorah, the medium on Most Haunted who first claimed to contact Isobella in 2002. He also claimed that Isobella enjoyed creating the activity, and watching the expressions of those present (Northern Echo 2002).

The activity is fairly varied, from temperature drops to objects floating through the air. Visitors report hearing their names called, while others have apparently seen a young girl. One waitress even saw a man in a lighthouse keeper uniform who vanished in front of her (Estelle 2014). People report smelling tobacco smoke in the kitchen corridor. It also lingers in the recreation of a keeper’s cottage.

I actually did a ghost hunt at Souter Lighthouse back in 2011. Very little occurred on the hunt, although there was an unexplained bang on the inside of a locked door. The door had a window in it so we could see into the room, and therefore see there was no one inside the room when the bang happened.

I’m unconvinced by its haunted reputation, but it wouldn’t surprise me in the slightest for the entire area to have some sort of psychic thumbprint.

After all, smugglers used the caves at nearby Marsden and that many shipwrecks in one place is bound to create some kind of disturbance. Like Hook, Souter stands on the mainland, as opposed to being on a separate island like Flannan Isles and The Smalls. It doesn’t have the same isolated feel—it’s more industrious and ‘lived in’. I suppose that doesn’t stop the legends!

What do we make of these lighthouse legends?

That we’d have ghost stories at these lighthouses doesn’t surprise me. They’re isolated buildings, often in areas linked with violence or loss of life. Lighthouse keepers also faced harsh conditions in inhospitable places. When we visit them now, devoid of life thanks to automation, we can perhaps peer through into echoes of their past lives.

But the legend of The Smalls tragedy shows just how unwelcome these places could be. And the mystery of the Flannan Isles remains unsolved. With men going missing, and corpses beckoning to their colleagues, our imaginations can easily run riot.

Still, creepy or not, lighthouses did and still do provide a lifesaving function, and for that, we should be truly grateful.

Do you know any good lighthouse legends? 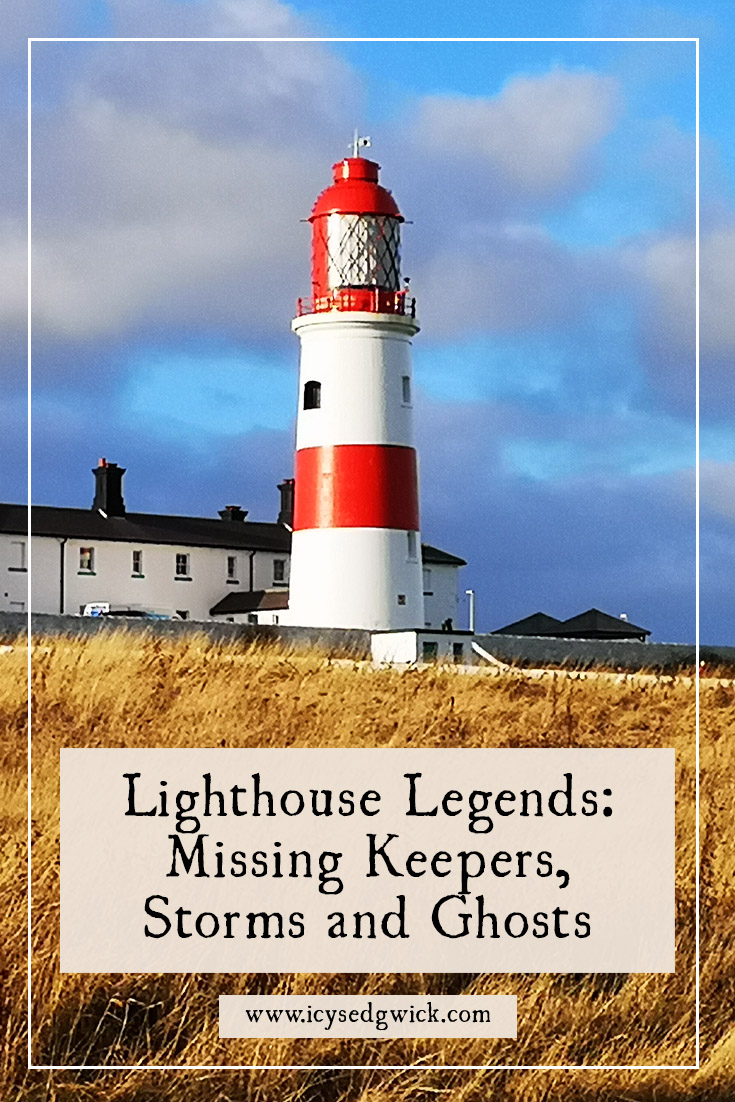