The oak tree is pretty synonymous with the British landscape. From the National Trust logo to the mighty Major Oak that allegedly sheltered Robin Hood, we’ve got a bit of a thing about them. 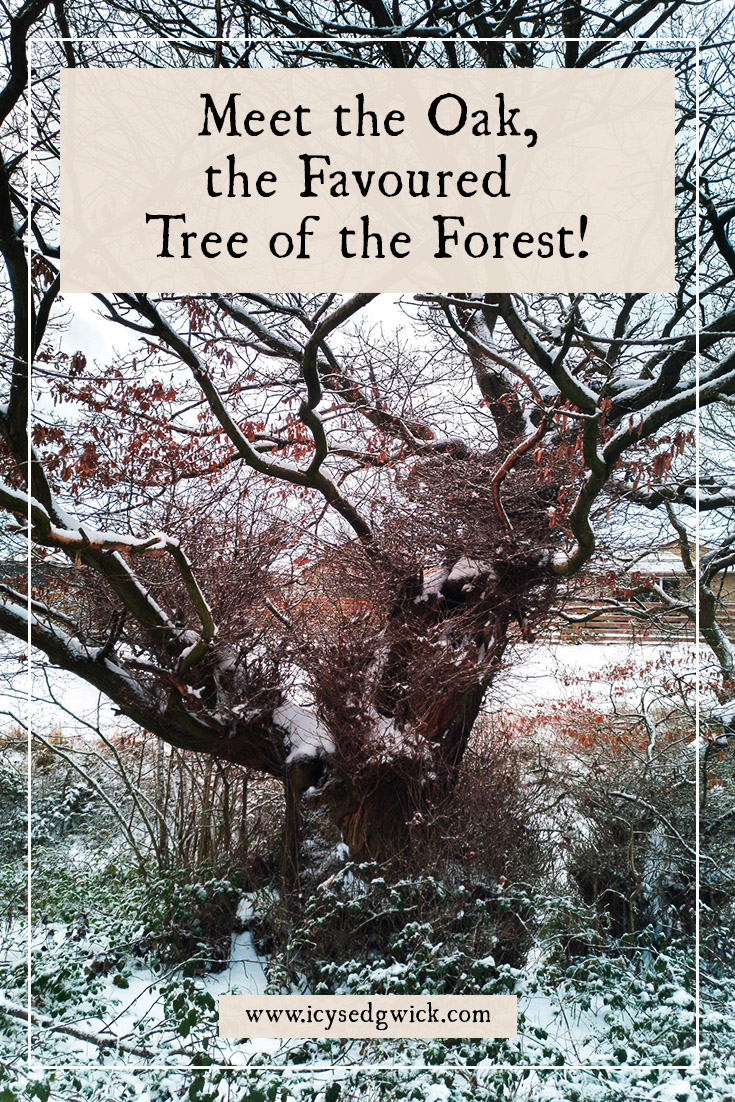 The oak appears in legends of famous trees, mythology, and even folklore. So come with me and get to know this fabulous tree…

Oak trees and the Weather

Many European cultures include some kind of oak veneration. The gods associated with oak trees are also associated with storms, especially thunder. The height of the oak and its low resistance to electricity make it prone to lightning strikes. Lightning is important since some believed it was God striking the tree to leave mistletoe behind.

An Irish saying predicted the kind of weather you could expect depending on which tree’s leaves appeared first, the oak or the ash.

According to Margaret Baker, people saw oak trees as a protective tree against lightning or fire. Lightning struck an oak in Needwood Forest and people travelled from miles around to harvest parts of the tree as lightning charms (2011 [1969]: 109). Baker describes staying in a cottage in Sussex as a child, where a jar containing oak twigs, acorns, and oak apples sat on the mantelpiece to guard against lightning strikes (2011 [1969]: 109).

I had a fascinating conversation on Twitter regarding oaks, after I referred to them as sacred to Jupiter. They’re also sacred to Perun, the Slavic thunder god.

An old oak struck by lightning burning from the inside. For Pomeranian, South Baltic, Slavs, trees struck by lightning have a special status, believed to guard off demonic forces and possess purifying power. This was probably because “Perun, The thunder god, now resided in them” pic.twitter.com/7UEntLhGgO

Even better, @serbiaireland went on to add “Particularly prayers to God for protection against destructive weather conditions were always held under the village holy tree. Interestingly, most of these trees were large oaks, the holy trees of the Slavic Thunder God Perun…”

The Irish word for oak is ‘dair’, so some people think ‘druid’ derives from oak. Druids apparently worshipped in oak groves, though without written records it’s hard to know that for sure. A lot of what we ‘know’ about the Druids came from the Romans, who were on a mission to wipe the Druids out. It’s possible some of what they wrote was early propaganda!

According to Druidry.org, the oak tree “was regarded as the Tree of Life as its deep roots penetrate as deep into the Underworld as its branches soar to the sky”. Many believe the ash to wear that particular crown. It’s also possible the yew tree was actually the prototype for Yggdrasil. So who knows?

In ancient Greece, the Dodona oak became an oracle. The selloi priests listened to the rustling leaves to ‘hear’ the judgments of Zeus. One legend claimed a branch from the tree was used to build the Argo, the ship used by Jason and the Argonauts. The crew got vital warnings from Zeus via the branch (Binney 2018: 48).

The Greeks also celebrated Daidala in an oak forest in Plataea. They attracted birds with cooked meat and cut down the first tree that the first bird who ate the meat landed on. They carved the oak into a bride and carried it in a procession for Hera (Binney 2018: 65).

According to Ernst and Johanna Lehner, Abraham spoke to an angel under an oak tree, making the tree sacred. It was also sacred to Dagda, an Irish god. The acorn represented immortality and fecundity (2003: 42).

The Oak Tree and Jupiter

The oak tree was also sacred to Zeus’ Roman counterpart, Jupiter. As a result, Roman commanders wore crowns of oak leaves after success in battle. Oaths sworn on the oak tree were particularly binding.

According to Claude Lecouteaux, the Romans put boundaries around oaks that had been struck by lightning (2015). This made these oaks sacred places, ostensibly as a site where Jupiter had made contact.

An oak grove dedicated to Egeria stood near Rome’s Capena Gate. Egeria was apparently an oak nymph who inspired King Numa to develop “wise laws” for the Romans (Porteous 2002: 71). Pregnant women made sacrifices to Egeria in the grove to ensure a safe birth.

People fed the fire of Vesta with oakwood in Rome, while shipbuilders apparently used oak to protect ships from lightning strikes at sea (Baker 2011 [1969]: 109).

The Major Oak stands in Sherwood Forest. According to legend, Robin Hood and his men hid in the tree. Many think the tree isn’t old enough but it’s become a tourist attraction nonetheless.

The oak tree also hid Charles II after the battle of Worcester in 1651. He avoided capture by the Roundheads by hiding in the oak at Boscobel. 29 May became Royal Oak Day in 1660 in recognition of its part in hiding him. People decorated their door knockers, shutters, and even hats with oak. Those who didn’t take part risked being stung with nettles (Baker 2011 [1969]: 110).

Two oak trees stand at the foot of Glastonbury Tor. They’re named Gog and Magog after two ancient British giants. Scholars believe they’re the last oaks of a grove that originally led to the Tor.

Herne’s Oak stood in Little Park, Windsor until 1796. People claimed a link with Herne the Hunter, an Elizabethan forest keeper. He was said to haunt the area, recognisable for wearing antlers (Baker 2011 [1969]: 111). Shakespeare mentions him in The Merry Wives of Windsor. Sightings were bad omens for national peril or dangers to the Royal Family, and people point to sightings before WWI, the Wall Street Crash, and the abdication of 1936 (Baker 2011 [1969]: 111). One of the oaks planted in 1906 has been named Herne’s Oak to continue the tradition.

The Oak Tree and Folklore

Lots of church parishes had a priest read parts of the Gospel at specific oak trees. It was part of the Beating of the Bounds ceremony. These trees went on to be known as the Gospel Oak.

Oak trees also lend their name to ‘Gallows Hill’. In Scotland, chieftains often planted oaks on high ground. By hanging deserters or enemies from it, their people could see the punishment for disobeying the rules. These high places became ‘Gallows Hill’.

It’s not all bad news for the oak. In some parts of the country, people believed you could walk around an oak tree and wish your illness away. The first bird to land in its branches would carry your pain away with it. Christina Oakley Harrington notes that people in the West Country used the oak tree for the Yule log (2020: 91).

A Welsh belief said rubbing your left palm on oak bark on Midsummer’s Day would keep illness away all year. And if you want to avoid premature ageing, wear an acorn on a string around your neck. It’s certainly cheaper than expensive skincare.

According to Harrington, you can use oak in spells to protect your authority or to increase strength in leadership (2020: 91). St Augustine preached under an oak on the Isle of Thanet, Kent, to protect himself against sorcery (Baker 2011 [1969]: 113).

According to Harrington, there was a belief that fairies moved into oak trees when Christianity arrived (2020: 91). If you find a hole in the trunk, this is a ‘fairy door’ (they’re actually caused by fallen branches). Rub your hand on the hole if you want to call on them. You can do so to pay your respects or to ask for help. It’s sometimes considered advisable to offer a lock of hair or cream in return when you petition an oak for help.

Fairies were believed to dance around Herne’s oak in Windsor Great Park (Harrington 2020: 91). Harrington also advises that you can dance around an old oak tree to meet the oak tree spirits or fairies (2020: 92).

Volume 2 of the Encyclopaedia of Superstitions, Folklore, and the Occult Sciences of the World contains a range of fascinating oak tree superstitions (2003: 822).

I’ll leave it up to you to decide which ones you believe.

If you know any more oak tree superstitions, pop them in the comments below!

Over to you! What do you think of the oak tree now?

Daniels, Cora Linn and C.M. Stevens (2003 [1903]), Encyclopaedia of Superstitions, Folklore, and the Occult Sciences of the World, Vol. II, Honolulu: University Press of the Pacific.