Rowan trees have long been associated with witchcraft and magic. Its wood acted as an antidote against fairies, the Evil Eye, and even disease. It even bore the name of the “wayfarer’s tree” since it stopped people from getting lost on a journey.

Patricia Monaghan notes the tree is often found near ancient monuments, stone circles, and graveyards (2004: 400). This helps to explain its Otherworld and mystical connections.

According to folklore, you could even uncover witches using rowan’s unripe berries. Simply wave them over a suspect and they’ll instantly confess (Monaghan 2004: 400). If a man who’d been baptized touched a witch with a rowan branch, the Devil would carry her away (Porteous 2002 [1928]: 87).

But what makes this humble tree so powerful? 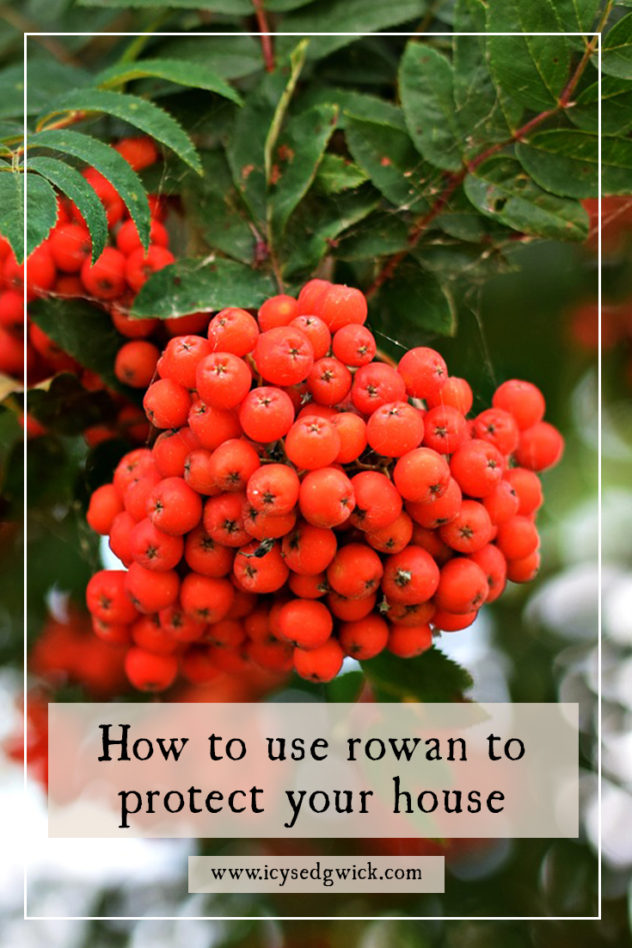 Let’s investigate the folklore of the rowan. Hit play to hear the podcast episode or keep reading!

Rowan and the Gods

In Greek mythology, Hebe (goddess of youth) passed ambrosia to the gods using her magical chalice. When she lost the cup to demons, the gods sent an eagle to retrieve the cup. A fight ensued. The feathers and drops of blood turned into a rowan tree where they fell to earth.

The tree also appears in Norse mythology. The gods made the first man from an ash tree. But the first woman was made from rowan.

The tree has a further link with Thor. The god needed to cross the fast-flowing river Vimur. Climbing out on the opposite bank proved more difficult than he’d expected. A rowan tree bent down from the bank to lend a branch and Thor hauled himself free (Porteous 2002 [1928]: 217).

In Welsh mythology, the Cad Goddeu (Battle of the Trees) spoke of an ongoing feud between rowan and juniper. Any tree planted between these sworn enemies would be split in two.

And many scholars make a link between the tree and druidry. John Lightfoot didn’t like to draw any conclusions. But he did note the frequency of the trees near stone circles in his Flora Scotia (1777).

There’s no real way to know if that’s a coincidence. But given the protective powers of rowan, it wouldn’t be surprising if it were deliberate. And if rowan could protect a stone circle, imagine what it could do for people!

Parts of the tree became a useful talisman against evil. Many people kept equal-armed crosses made from rowan twigs and red thread in their pockets (Monaghan 2004: 400). Here’s an example I found in the National Museum of Scotland in Edinburgh.

In Cumberland, branches were prepared for use by carrying them around the Beltane fires. Welsh communities planted rowan trees in churchyards to protect against demons.

In Scotland, men who’d been christened could touch witches with a rowan sprig. It would mark her as one to be carried off by the Devil. Carrying a sprig in your pocket also protected against rheumatism.

If you found a person dancing in a fairy ring, you could reach a rowan branch in for them. They’d grab the branch and you could pull them free.

People feared being ‘hag-ridden’, something we recognise now as sleep paralysis. Yet people believed they were safe from the phenomenon if they kept a branch of rowan in bed (Porteous 2002 [1928]: 86).

In Ireland, berries could even cure the wounded. But while rowan is a member of the rose family, the raw berries do contain harmful parasorbic acid.

But when did you harvest the wood? For many, the correct time to collect rowan was midnight on Holyrood Day (September 14). On this day in 335AD, the Empress Helena allegedly discovered the cross from Christ’s crucifixion.

Though elsewhere, St Helen’s Day (21 May) was the correct time to collect rowan. You should also use a household knife to cut away twigs. When you brought them home, you followed a different route than the one you took to reach the tree.

Protecting the Home Against Witchcraft

Entrances into the home were particularly susceptible to witches. So how could you stop them from getting inside? Planting holly beneath the windows certainly helped.

Or you could use rowan, also known as a Portal Tree. It forms a threshold between our world and the otherworld. So naturally, people also used the tree at the gate to their property, or outside their door, for protection (Monaghan 2004: 400). According to Niall Mac Coitir, Scottish migrants took the custom of planting rowan trees at the door to New Zealand (2015: 29).

But what about the chimney? Chimneys were well-known to be the weakest point of the house in terms of illicit entry.

Sign up below to get my free guide to protecting your home using folklore suggestions like this!

There were concerns about witches gaining access to livestock. So farmers hung rowan sprigs in the rafters of cowsheds. In some places, farmers wrapped plaited the sprigs around the horns of the cows.

Susan Drury describes the use of rowan twig loops to protect animals. These loops were held closed with red thread. Cows being milked after calving were milked within these rowan loops (1985: 245).

As late as 1846, farmers fitted collars of rowan sprigs to their lambs in Yorkshire. Farmers also hung rowan garlands around the necks of pigs to ward off evil magic (1985: 246).

In Westphalia and County Wexford, farmers even lightly whipped their cows with rowan switches before they sent them to pasture on May Day. All to keep the fairies and the witches at bay.

And if you had a bewitched horse? Only a rowan stick could bring it under control.

Farmers fed mares and cows rowan berries to help with a safe and easy birth (1985: 245). Drury thinks this may also have ensured the safety of the mother and baby from witchcraft (1985: 244).

Other uses for the Rowan Tree

It didn’t just provide protection for livestock and houses. The wood even appeared in the construction of watermills. Seedbeds could be spiked with the wood to keep witches away from the plants.

People planted rowan trees in churchyards to deter evil spirits. Pallbearers would rest coffins under rowan trees on the way to the graveyard (Porteous 2002 [1928]: 217).

Even boats carried the wood on board. Sailors believed such vessels couldn’t capsize, and no man would drown. In the story of the Laidly Worm, Childe Wynde’s ship is made of rowan wood. This means his evil stepmother can’t use magic to sink the ship.

It wasn’t just the wood that people used. Rowan leaves could be used in a salve to soothe sore eyes (Hutchings 1997: 56).

As with the folklore of any plant or tree, it’s difficult to know how accurate or useful the information is. And you’d need to believe in the negative side of witchcraft for you to need rowan as protection.

But these old tales are diverting enough. And they tell us a lot about the way that our ancestors lived their lives.

They also tell us that they felt they needed protection from forces beyond their control. While we can seek information on Google, our ancestors had fewer resources at their command.

And if planting a tree beside your door made you feel safer, then who are we to judge?

Over to you! Do you have any rowan trees near your home?