Sage has long been associated with wisdom, with the plant name even applied to those we consider to be wise (Harrington 2020: 114). As the second plant in the famous refrain, “parsley, sage, rosemary and thyme” from ‘Scarborough Fair’, it’s also the second plant in our Folklore of Edible Plants series.

This fantastic plant was sacred to the Romans (Binney 2018: 123). Both the Romans and Egyptians preserved meat using sage (Redwood 2019). Nicholas Culpeper noted its value to the memory, which is borne out by modern medicine. Sage prevents the breakdown of acetylcholine which the brain needs to store memory (Binney 2018: 123).

Culpeper assigns sage to Jupiter, while Lilly assigns it to Saturn (Harrington 2020: 114). This doesn’t exactly help with its magical uses, since it pops up in spells to increase love and remember loved ones when they pass! 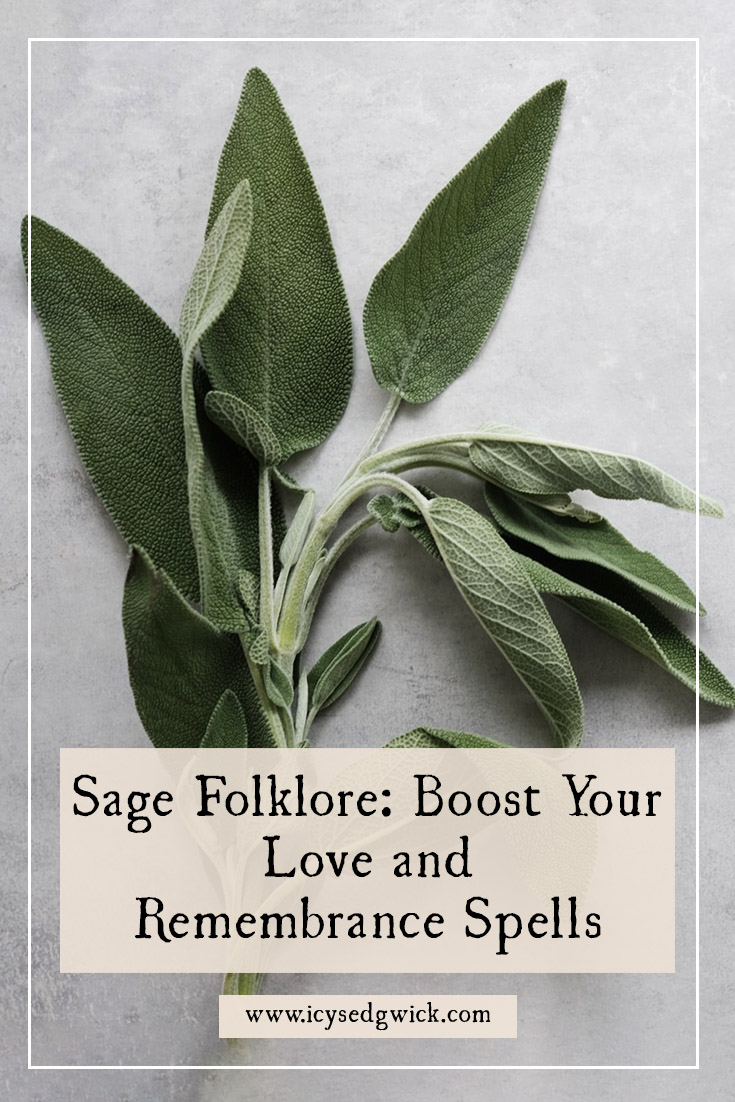 So let’s dig into the folklore of sage.

In this post, we’ll focus on Common Sage, Salvia officinalis, rather than the endangered White Sage Salvia apiana. Common Sage is originally from the Mediterranean, while White Sage is native to the southwestern United States and northwestern Mexico. White Sage has been overharvested due to appropriative practices, and as it doesn’t grow where I am in northern Europe, we’ll look at Common Sage instead.

Sage’s scientific name is Salvia. This comes from the Latin word salveo, “to heal” or “to save”. The officinalis part of sage’s botanical name comes from the Middle Ages. English Heritage explains the monks stored their medicines and herbs in an officina, or storeroom (2016).

Like the Romans, medieval monks used sage in a host of their remedies (Binney 2018: 123). They used it to cleanse the body, and also to whiten teeth.

Eating sage daily in May apparently gave eternal life. Rubbing fresh sage leaves on warts was thought to cue them. That’s not the strangest idea, since sage also has antibacterial properties (Redwood 2019).

It was also used as a remedy for St Anthony’s fire, ague, and heartburn. To use it in this manner, you were directed to eat seven leaves on seven consecutive mornings before breakfast (Baker 2011 [1969]: 139).

According to Plant-Lore.com, sage tea was used to help ease headaches and arthritis. People also used sage leaves as poultices on mouth ulcers or to ease sore gums caused by dentures (2021).

Perhaps the simplest remedy only needs two ingredients. Mix black tea leaves and sage to create a hair rinse for dark hair (Dow 2011: 118). You can also make tea with sage as a gargle if you have a sore throat (The Witchipedian 2019).

Sage and the Plague

Sage’s antibacterial properties perhaps explain why sage sometimes appears in the recipe for Four Thieves Vinegar. This first appeared in Marseille, where four grave robbers plundered graves during a plague outbreak. When caught, they claimed they’d used a special potion to protect them against contracting the disease (Laws 2016).

There is an alternative version that sees the thieves invent the vinegar after being sentenced to bury plague corpses (Our Herb Garden 2008 – 2022). Either way, the intention is the same: to use the potion to stave off the plague.

If you’re interested, their mixture contained lavender, rosemary, distilled vinegar, and cloves. Such a mixture is often called Four Thieves Vinegar. Other recipes say it contained garlic, wormwood or sage.

One of the more unfortunate lines that we find in the folklore of plants is the assignation of plants to one gender or the other. We have to remember this is a throwback to a time when men assumed ascendancy and authority over women. These domestic politics don’t hold water now, but it’s worth including them to examine what earlier societies believed. After all, if you don’t track changes in belief, you can’t see how far you’ve come.

But sage was one of the plants whose growth was associated with strong or domineering women. Sage was considered to flourish where women dominated the household (Harrington 2020: 114). If sage flourished in the garden, the family would only have girls (Baker 2011 [1969]: 139).

One line of doggerel ran thus:

“If the sagebrush thrives and grows,

The master’s not master—and he knows!“

Here, the growth of your sage would even indicate your social status. Anecdotes abound about nervous husbands cutting back the sage bushes so as to avoid wagging tongues about their ability to run their household.

If you identify as a woman and you want to increase your authority, sage can help. Put a sage plant on the kitchen windowsill and talk to it every day. Tie a purple ribbon around the pot, or put it in a purple pot (Harrington 2020: 115).

It’s easy to find links between edible plants and death, which is perhaps unexpected. Parsley has its association with Persephone, and as we’ll see next week, rosemary is likewise a plant associated with remembrance.

The same holds true for sage. It didn’t wither quickly so it was used as a remembrance at funerals. Mourners might throw it into graves (Baker 2011 [1969]: 140).

In April 1662, Samuel Pepys travelled to Southampton from Gosport. He noticed a churchyard along the route in which all the graves were sowed with sage (Pepys 1662, online).

Sage also appears in love spells. Christina Oakley Harrington notes a coercive love spell to make someone love you. Find three sage leaves. Write ‘Adam, Eve’ on one leaf, ‘Jesus, Mary’ on the second leaf, and your name on the third leaf. Grind them up and put the powder into your intended’s food or drink. Obviously, this isn’t recommended since coercing someone to love you breaches their free will (Harrington 2020: 115). Though there would be nothing stopping you from adding the powder to your own food for a boost of self-love.

Sage leaves also pop up in two time-sensitive rituals to help you draw a future partner.

Pick twelve leaves at midnight on Christmas Eve to see a vision of your future husband. Don’t damage the bush while doing so (Baker 2011 [1969]: 140). In Lincolnshire, people did the same with red sage and St Mark’s Eve. We find this with a lot of these rituals: they move around the calendar to appear on St Mark’s Eve, Midsummer’s Eve, All Hallow’s Eve, Christmas Eve, and even New Year’s Day!

If you’ve got a little more time and you simply want to call in a partner, rather than see who the partner will be, try this ritual from Yorkshire. Gather 12 sage leaves at midnight on St John’s Eve, or June 23. Put them in a saucer, and then leave that in a drawer until just before the following midnight. Just before 12, open the window, and then drop a leaf outside for every stroke of the hour. This would apparently summon a husband to your home (Inkwright 2019: 138).

There is a theory that the refrain in the song ‘Scarborough Fair’ that inspired this post is in itself a work of love magic. The bouquet contains parsley, sage, rosemary, and thyme.

One translation of this suggests these meanings of the bouquet:

Parsley: I want to have babies with you.
Sage: I’m dependable.
Rosemary: Remember me.
Thyme: I’m yours.

There is an alternative meaning since sage also meant ‘domestic virtue’ while garden sage meant ‘esteem’ (Burke 1856: 54). Well, it’s one way to send a message. And as we saw with the Victorian Language of Flowers, plant symbolism can be combined within a bouquet to send more sophisticated messages.

What Do You Make of Sage?

Sage is a fabulous herb! There are a range of ways to involve it in your life, from growing it, to using its teas, or eating it.

And it’s a great herb to use if you want to show a mark of respect to someone who has died. Its links with memories make it a great plant for remembrance.

I’m not a herbalist so I wouldn’t recommend ingesting any herbal preparations until you know they’re safe for you, based on whether you’re pregnant, or you’re taking any medication. If you’d love to learn about herbalism, then check out Rowan and Sage, and learn from one of the best and most accessible practitioners I’ve certainly come across. The Kitchen Herbalism course is a great place to start. Click here!

But let me know your associations with this versatile plant below! Have you tried growing it? Or do you know any other superstitions?

Daniels, Cora Linn and Charles McClellan Stevens (2003 [1903]), Encyclopædia of Superstitions, Folklore, and the Occult Sciences of the World, Vol. 2, Honolulu, University Press of the Pacific.