It’s hardly surprising that mariners would have a host of seafaring superstitions and folklore about sailing. In earlier centuries, bad weather, poor communications with land, and disease could bring havoc to any journey. 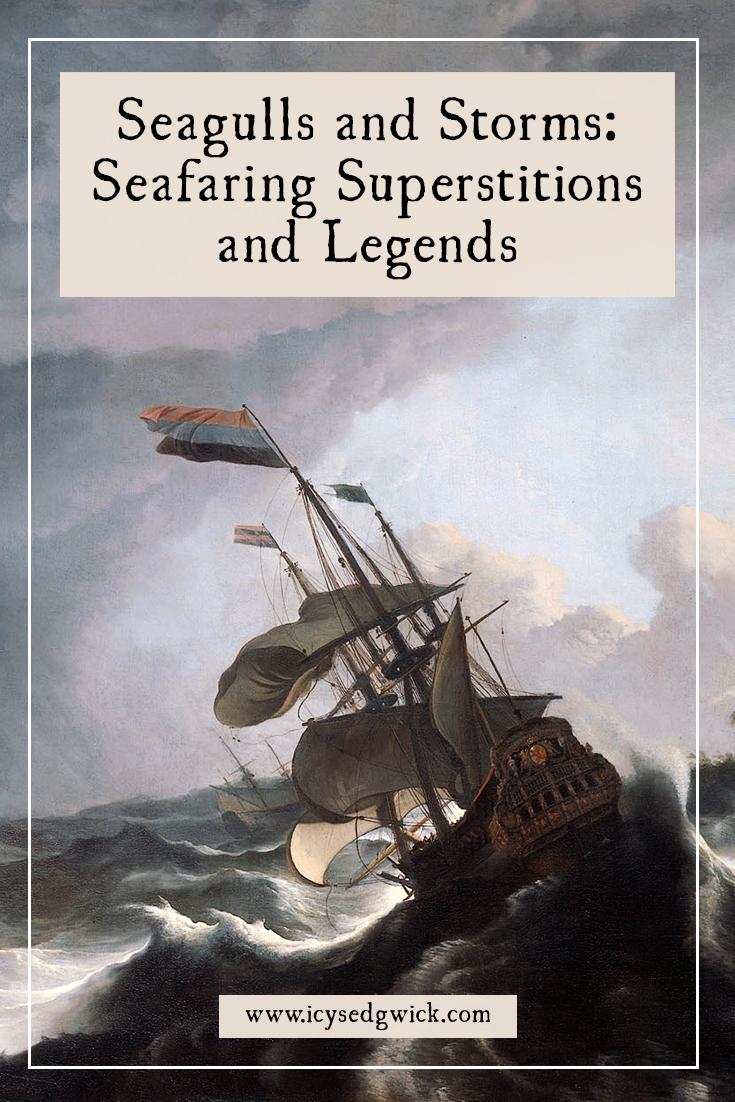 Folklore both preserves ideas about what sailors feared and provides protections to keep dangers at bay. What sounds like superstition to us was a set of practices to give a feeling of control over their situation. Folklore also maintains the legends of lost vessels that return to haunt the waters in which they were lost.

In this post and episode, we’ll explore omens related to seafaring, tales of ghost ships, and other hazards that might occur on the high seas.

Sailors considered it unlucky to start a voyage on Friday. This seems to be because the crucifixion was on a Friday. Bad luck even followed if you started building a ship or boat on a Friday. In the Highlands, the belief explained you shouldn’t take new boats to sea for the first time on a Friday (Cameron 1903: 301).

One somewhat apocryphal legend claims the British navy wanted to lay this superstition to rest. To do so, they launched the HMS Friday on a Friday, which set sail for its maiden voyage on a Friday. The fact it was apparently never seen again seems to outweigh their intention. This particular legend was also ascribed to a shipowner in Connecticut as well (Hull Packet 1878: 3). No evidence exists to suggest it was ever true, but it has been so often repeated that it simply cements the sheer weight of negative beliefs around Fridays and sailing.

Sailors thought it bad luck to see a clergyman or a red-haired woman on the way to their fishing boat (Cameron 1903: 300). Women were long considered bad luck on board a ship unless the ship was in port. That said, Pliny claimed a bare-breasted woman had the power to calm angry seas (Reader’s Digest 1973: 75). This explains why sailing ships often have bare-breasted women as figureheads.

Meanwhile, seeing a horse or a grouse offered good luck in the Highlands (Cameron 1903: 301).

If you stepped onto a ship left foot first, it would bring bad luck. Seeing rats leaving a ship was also a negative omen. Meanwhile, having a child born on a ship was a good omen.

Don’t take flowers on board ship as they’re for funerals. Likewise, any ‘ringing’ noises were bad luck as they were associated with funeral tolls. Sailors could still ring bells to tell the time or to alert changing watches. But a ship’s bell that rang on its own meant someone would die.

For those who died at sea, the body would be wrapped in a shroud and thrown overboard. The sailmaker usually had the job of making the shroud and would sew the body into it. They’d put the final stitch through the nose to make sure the person was indeed dead. Keeping a corpse on board was considered bad luck, which explained the desire to bury people at sea. That said, this is more likely due to wanting to avoid a decomposing body. Crews didn’t take empty coffins on board because they feared one of them would end up in it.

Strangely, sailors often made no effort to rescue drowning colleagues. This was apparently due to the belief that doing so would cheat the sea “of its due”, meaning they may be drowned instead of the person they rescued (Reader’s Digest 1973: 73). Many of them didn’t learn to swim either so as not to rob the sea of a soul. Weirdly, that didn’t stop them from buying cauls, since owning one was believed to protect the holder from death by drowning.

Sailors believed birds, particularly the albatross, carried the souls of the dead (Periman 1963: 126). So killing an albatross brought bad luck. Coleridge immortalised this in his ‘Rime of the Ancient Mariner’ since a sailor killed an albatross and suffered nothing but misfortune and tragedy afterwards. In some coastal areas, people linked the souls of drowned sailors with seagulls. As a result, no one should kill these birds. That said, the first record only dates to 1878 (Simpson 2007: 317).

The British freighter Calpean Star was bringing animals to a zoo in Germany—which included an albatross. One of the crew fed it a sausage and it died. In August 1962, it set sail, only for the generators to fail. The ship eventually lost power and drifted across the sea. After damaging a rudder in the Antarctic, it ran aground in Montevideo’s harbour. The engine room exploded and the crew abandoned the ship (Periman 1963: 126). Strangely, they found one of the sailors floating face down in the water, although he hadn’t been killed by the explosion. No one knew what killed him, though some suspected the curse of the albatross (Periman 1963: 127).

You couldn’t clap on board a ship because people believed it invited thunder. Meanwhile, you didn’t take umbrellas on board in case it conjured up bad weather. Sailors also didn’t throw stones into the sea lest it caused a storm, though you could get a modicum of storm protection by nailing a horseshoe to the mast (Cameron 1903: 303).

Whistling could apparently raise a gale, which could either be a bad omen of a storm or helpful in calm waters. Morag Cameron explained that sailors should sing, rather than whistle. Otherwise, they should “buy” wind from a wise woman (Cameron 1903: 301).

In Scotland, this took the form of buying a knotted thread or handkerchief. Each of the three knots raised a different level of wind, from a gentle breeze, to a strong wind, to a gale. Untying the knots too quickly was “[t]he only danger” (Cameron 1903: 302). The sale of these items provided a steady trade for old women in parts of Scotland.

A superstition from Seahouses in the northeast of England explained that bad weather was coming when you could hear the seals barking on the Farne Islands (Reader’s Digest 1973: 73). On the shores of East Lothian, sailors thought seeing a Little Auk foretold rough weather at sea (Black 1891: 138).

The Klabautermann is a kobold that helps out on boats in the North Sea and Baltic Sea. According to the legends, this helpful little spirit is a joyous creature, diligent in its duties, and even rescues any sailors that go overboard.

There are descriptions of the Klabautermann, that include his yellow outfit and pipe. But there’s a problem with this. The crew never see him. That’s a good thing because he only appears to the crew on a doomed ship. According to Walter Hävernick, the spirit actually belonged to the ship’s captain. He carried it onto the ship in a box, and it protected the ship while it was on board (1973: 166).

Meanwhile, Davy Jones was considered the chief of the evil spirits in the deep. Seeing him in the rigging meant a hurricane or shipwreck was on the way (Hull Packet 1878: 3). The sea bed became known as Davy Jones’ Locker, where he gathered the souls of any victims.

Cornwall in particular boasted a 19th-century tradition of phantom ships. Some of them even appeared to sail over land the way they moved over the sea. This was apparently an omen that a wreck would happen (Simpson 2007: 277).

In general, these tales feature the re-enactment of a wreck. The ships usually appear on the anniversary of their sinking near the spot where they sank. Thirteen Navy warships were swept off course onto the Sands in 1703, killing most of the crew (Gaunt 1967: 28). People reported seeing one of them, the warship Northumberland, 50 years later.

Meanwhile, the most famous legend is that of the Lady Lovibond, which allegedly wrecked on the Sands on 13 February 1748. As the story goes, the captain had brought his new bride on board for a wedding voyage. The mate also loved her, and in a fit of jealousy, ran the ship aground during the wedding feast (Gaunt 1967: 28). All on board drowned, and many believed that the vessel still appeared on stormy nights. Some claimed to hear the sounds of the wedding feast. Others claim the ship was seen again every fifty years, in 1798, 1848 and 1898 (Simpson 2007: 277).

This makes for a good story, although it’s worth noting that no one can find any records of either the ship or its sinking. It’s possible the story was invented, and placing it on Valentine’s Day gives it an especially ghoulish feel.

And we couldn’t end this post without mentioning perhaps the most famous phantom ship. The first report of the Flying Dutchman appeared in 1821 in Blackwood’s magazine, which claimed Vanderdecken, the ship’s captain, swore to get around the Cape of Good Hope—even if he had to sail until Judgment Day (Hambling 2021). The Devil was listening and cursed the ship to do exactly that. Seeing the ship was a bad omen, despite the lack of evidence of a real ship behind the story.

An article in the Teignmouth Post in 1914 explained how the Delmont collided with the Flying Dutchman near Rio. The crew claimed “a phantom full-rigged ship” ran down their vessel. They claimed to smell brimstone after the collison, and noticed “a red glow on the surface of the sea”. Their fears were confirmed when the ship’s cat, Jeremiah, hid in the hold and refused to come on deck. It should be noted that older sailors identified the other ship as being too modern to be the Flying Dutchman. The sailors from the apparent ghost ship named their vessel as the Esmeralda (Teignmouth Post 1914: 8).

An article in the Weekly Journal in 1907 explained how an isolated rock off the Cape had been identified as the source of the legend. Only visible during storms, experts thought that sailors mistook the rock for a ship in distress (Weekly Journal 1907: 7).

What do we make of these seafaring superstitions?

As with most superstitions, they’re intended to provide a sense of control. Taking particular actions in a specified way gives the appearance of an ability to hold misfortune at bay. Of course, the point of superstitions is that every time you do them and the bad thing doesn’t happen, it seems as though the practice worked. In terms of seafaring, the superstitions that appeared to avert tragedy would become a regular practice.

Over time, better navigation and weather forecasting, along with more advanced vessels, made many of these superstitions redundant. Even the ghost ships are seen less frequently, with their re-enactments a fragment of folklore rather than an anticipated event. Still, if you’re out at the coast one stormy night, maybe gaze out to sea for a while. Who knows what you’ll see?

Hambling, David (2021), ‘Storm-stricken sailors haunted by fear of the Flying Dutchman’, The Guardian, Saturday 22 May, https://www.theguardian.com/environment/2021/may/22/storm-sailors-fear-flying-dutchman-ghost-ship-cape-good-hope.