Blacksmiths have long been held up as having supernatural abilities – either for good or ill. In Ireland, smiths held such a high status that people thought they had magic powers (Doyle 2010: 11). Notice I say ‘smiths’ at this point. The term does refer to metalwork, and it breaks into specialisms like silversmiths, blacksmiths, or coppersmiths in the Middle Ages (Doyle 2010: 12). 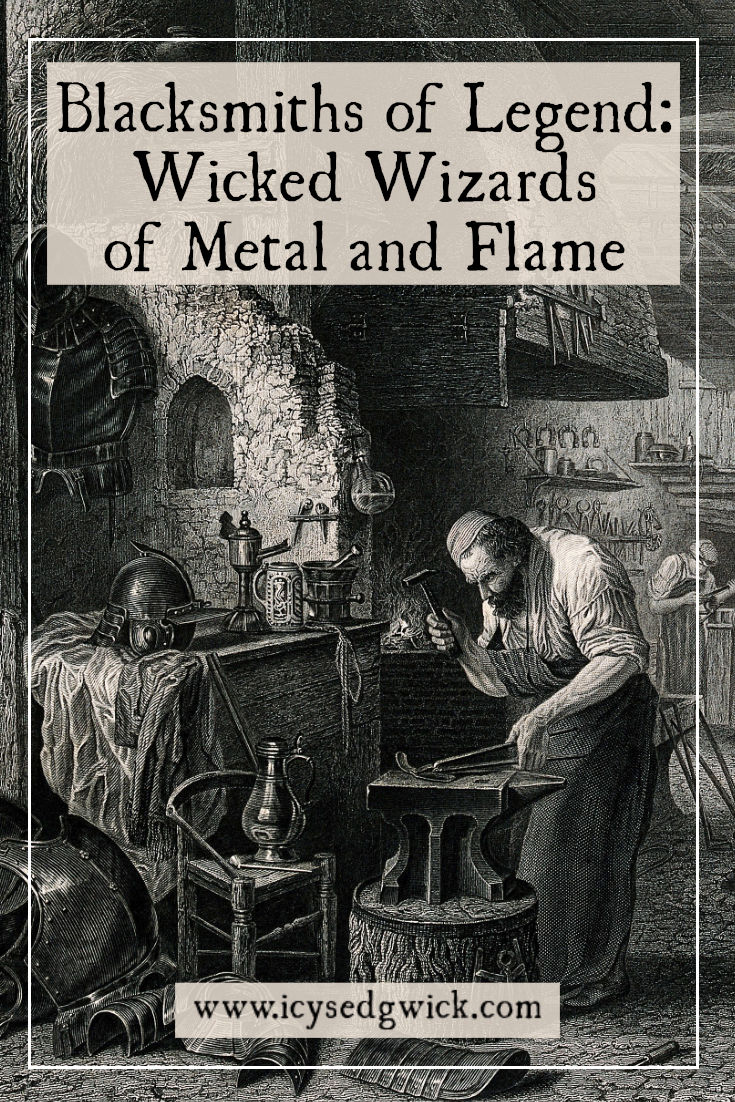 Hit ‘play to hear the podcast episode, or keep reading to meet these metalworking heroes!

The Tale of the Smith and the Devil

It seems prudent to start with the ‘oldest’ story about smiths, and that is the tale of the Smith and the Devil.

Back in 2016, folklorist Sara Graça da Silva and anthropologist Jamshid Tehrani created a family tree, in which they uncovered the origins of fairy tales. You can read about their process here. But for our purposes, this is where the tale of the Smith and the Devil came from. It could be traced back to an oral tradition that emerged during the Bronze Age (Graça da Silva 2016: 9).

The story varies in its detail, but at its heart, it deals with a smith who sells his soul in order to gain the knowledge to fuse objects together. Sometimes he sells it to the Devil, sometimes a djinn, sometimes Death. The supernatural being upholds their end of the deal, but the blacksmith tracks back. He uses his new power on the Devil, welding him to the ground. Thus trapped, the Devil removes the ‘soul taking’ part from the deal (Graça da Silva 2016: 9).

The story appeared as ‘The Smith and the Devil’ in the 1812 and 1815 versions of the Children’s and Household Tales collected by the Brothers Grimm. They removed it from their 1822 edition.

So why does it have such longevity?

George Monbiot discusses the connection between smiths and “malevolence”, putting them in the same category as “the wolf, the raven and the crone” (1994). He makes links between the fires of Hell and the forge. With these associations, the smith becomes a devilish figure. Monbiot even points out that couples in Britain who couldn’t get the Church’s blessing for their marriage would leap over a forge instead.

Yet Eamon Doyle points out that even though iron doesn’t survive that well in artefacts, archaeologists have found iron sickle blades and saws that are thousands of years old inside Egyptian tombs (2010: 11). They had no issues with using the metalwork of the smiths.

By contrast, Monbiot explains that in parts of Britain, people resisted iron tools. Here, “farmers believed that the evil they contained would poison the soil” (1994). I find this an odd belief since iron was also widely used to repel fairies. We can see this in the practice of hanging scissors over a cradle to deter the theft of the child and its replacement with a changeling.

In his argument, Monbiot suggests that the smiths were separate from the rest of their village not through being ostracised, but by being the rulers. By not understanding how smelting and forging worked, people assumed magical powers, and thus the evil associations were born. Those same associations allowed the smiths to keep their secrets and retain a level of power.

Yet Doyle disagrees, seeing the smith attain an important level in society with the move from the Bronze Age into the Iron Age (2010: 11).

Personally, I can’t help thinking that Iron Age forges may have been located on the edge of a settlement to guard against fire…

Wayland appears most often in Old Norse sources. In the Völundarkviða, Wayland was one of three sons of the king of the Finns. He was also a talented smith captured by the king of Sweden, who wanted to take advantage of Wayland’s almost supernatural abilities. The king even cuts Wayland’s hamstrings to prevent him from running away.

The panel from the Franks Casket shows Wayland in his forge – he’s the figure on the left.

But Wayland has no taste for a life of servitude. He crafts a winged cloak in secret, before killing the king’s sons as revenge. He even adds their skulls, eyes and teeth to exquisite goblets, jewels, and brooches. Wayland rapes the king’s daughter, ensuring the heir to the throne is his, before escaping using the winged cloak.

Some articles refer to him as an evil smith thanks to his actions while imprisoned. Bear in mind that he’s been captured, forced into slavery, and had his hamstrings slashed to prevent his escape.

Later writers apparently didn’t subscribe to the ‘evil’ theory because he even pops up in Beowulf and other Old English stories, where he’s usually an armourer or a weapon maker. In some legends, he even forged Excalibur at the request of Merlin.

According to English folklore, he made his forge near Oxfordshire’s Uffington White Horse. Locals will know Wayland’s Smithy, the Neolithic long barrow near Uffington Castle. Mike Biles relates the old tale that travellers could leave their horses who needed to be shod by the barrow with a sixpence (2018). If they came back the next day, the horse should be shod and the sixpence would be gone.

Will o’ the Wisp

Our next malicious blacksmith is Will the Smith, lurking in rural Shropshire. According to Katharine Briggs, he’s a wicked blacksmith who is so evil, St Peter gives him a second chance at life to right his wrongs (1976: 231). Instead, he does even more evil with the allotted time. The Devil doesn’t really want him either (I’d imagine the Devil is a bit fed up of blacksmiths by this point). Instead, he gives him a burning coal so Will has a means of keeping himself warm. Will takes to wandering at night, luring travellers into the marshes with his light.

In an alternate version, Will tricks the Devil into climbing into a steel purse. Will hammers it closed, trapping the Devil inside, so the Devil refuses to accept him into Hell. Instead, Will manages to get into Heaven after all (Briggs 1976: 231).

In a separate version, for some reason, the Devil grants Will an extra life. Rather than doing good with the extra time, Will does so much evil that even the Devil won’t take him. He’s left to wander between the worlds with just a burning coal for company, where he’s then conflated with the Will o’ the Wisp. There’s a lot more to the Will o’ the Wisp than this, but there is also some crossover with the tale of Jack o’ the Lantern, who goes on to become the jack o’ lantern of popular Halloween tradition.

These stories explore the wicked and malicious side to the blacksmith, and while we never learn what evil deeds he actually does, they must be heinous indeed if the Devil doesn’t even want him. There are links to the original Smith and the Devil story through Will’s trickery around the Devil, but Will does this to avoid the fires of hell, not to learn the secrets of forging. In most variations, his trickery doesn’t pay, unlike our next story.

Not all blacksmiths are malevolent or sinful. In the tale of St Dunstan, the saint takes the role of the blacksmith. He works diligently in his forge and attracts the attention of the Devil. Satan takes the form of a beautiful maiden and attempts to tempt Dunstan from his work. Dunstan spots the maiden’s cloven hooves, recognises her true identity, and sends the Devil away. Satan is not discouraged and returns as a wealthy man to tempt the blacksmith from his work.

Again, Dunstan spots the Devil’s cloven hooves. This time, he grabs the Devil’s snout with his tongs and won’t let the Devil go. He manages to nail horseshoes to the Devil’s hooves and won’t remove them until the Devil promises to leave blacksmiths alone. St Dunstan also extracts a promise from the Devil that he won’t bother anyone who hangs a horseshoe over their door.

(If you’re interested in folkloric ways to protect your home, sign up below for your free guide to doing exactly that!)

Thanks to St Dunstan, smiths now knew the diabolical secrets of smelting and forging, and ordinary people had a means of protecting themselves from the Devil. It’s hardly surprising St Dunstan is the patron saint of blacksmiths! His day falls on 19 May.

I think this legend of St Dunstan shows that it wasn’t always the case. While yes, he does trick the Devil, he does so in order to secure protection for others. Wayland acts as he does out of revenge for his imprisonment and being hamstrung.

Of these legends, only Will Smith’s fate rests on his evil deeds. True, other variations of ‘The Smith and the Devil’ show the smith as a trickster, capable of eliciting knowledge from the Devil himself.

But does that make the blacksmith evil, or just a cheeky chancer? Either way, I think there’s something truly magical about watching a blacksmith at work. It takes a lot of skill to turn a lump of metal into something useful using just fire and hammers.

Now, I will admit, I am a tad biased towards blacksmiths since I know one and I’ve had a go at it myself! In March, The Witty Smith in Sunderland helped me make this marvellous wand from steel and dalmatian stone.

I made a magic wand! Steel and dalmation jasper. Big props to @thewittysmith for a fab birthday treat! (I highly recommend him if you’re in the North East and you want a go at blacksmithing) #magicwand #blacksmith #blacksmithing #witchesofinstagram #northeastengland

And I highly recommend The Witty Smith’s classes if you’re in Sunderland after lockdown ends and you want a go!

Tune in next week to learn more about the blacksmith gods, and other blacksmithing creatures.

In the meantime, do you think blacksmiths are evil?

Biles, Mike (2018), ‘The legend of Wayland’s Smithy’, A Bit About Britain, https://bitaboutbritain.com/legend-waylands-smithy/.