I’m going to start this review by pointing out that I was never originally a fan of Damien Hirst. As with a lot of the Young British Artists, I found his earlier work crude and needlessly controversial. And yet. I found myself deciding on Venice as a holiday destination when I saw previews of his Treasures from the Wreck of the Unbelievable exhibition on the news. Why? 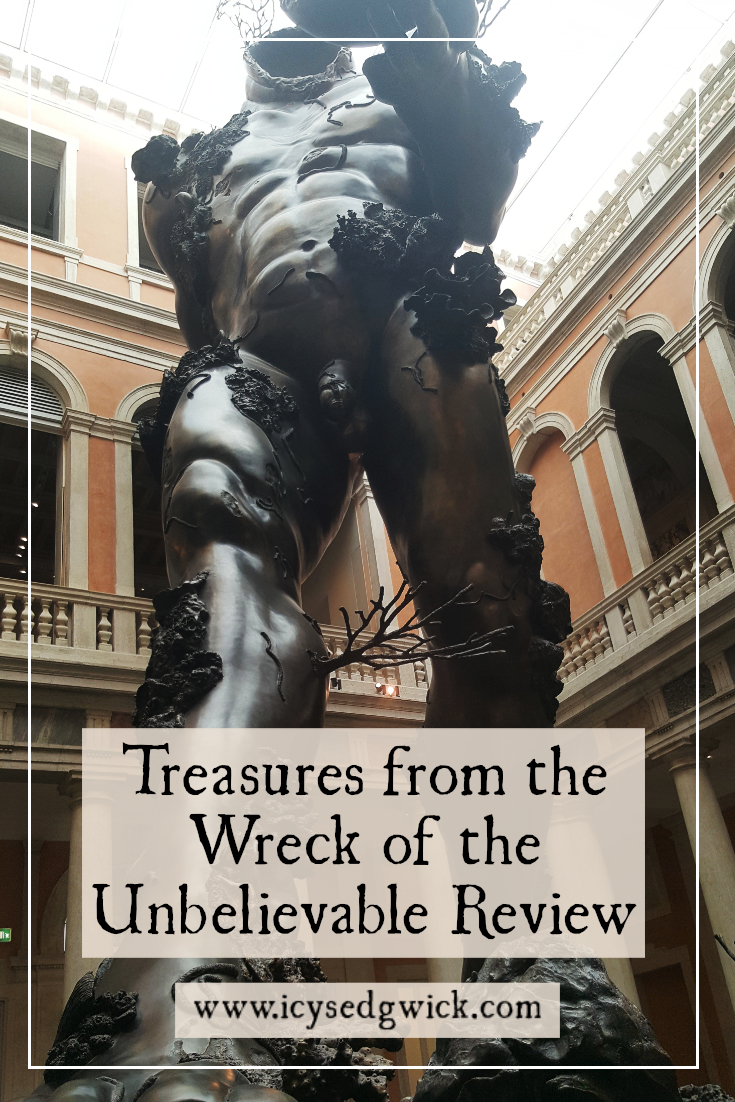 In a nutshell, Treasures from the Wreck of the Unbelievable is all about the story.

Unless you’ve been out of the loop / not in marketing or advertising, you’ll know ‘storytelling’ has been the buzzword of the past three years or so.

You can’t just write a blog post about a product any more. You have to tell a story. It’s understandable. That’s how humans pass on information to one another. Think of all of the cautionary tales wrapped up as fairy stories for children or urban legends for adults.

But Damien Hirst has taken the concept of storytelling and applied it to an art exhibition in the most glorious way.

Treasures from the Wreck of the Unbelievable is essentially built on a lie. But it’s a lie so cleverly told that it becomes a weird form of truth.

The whole exhibition rests on a single premise.

In 2008, a shipwreck was discovered off the coast of East Africa. The immense collection found in the area belonged to Cif Amotan II (aka Aulus Calidius Amotan), a former slave. After acquiring his freedom, he built his fortune and bought these artefacts.

The items ended up on the Apistos (translated as the ‘Unbelievable’), destined for display in a purpose-built temple. Sadly the vessel sank and deposited its fabulous cargo on the sea bed.

Huge photographs of divers reclaiming the finds accompany the objects on display. This just adds to the air of authenticity clinging to the pieces.

A wonderfully dispassionate but informative card accompanies each ‘found’ object. Half the time, you’re not sure if you’re reading a true statement or a slice of fiction. The tone is so similar to the information cards seen at an exhibition such as Sunken Cities at the British Museum that you begin to believe these objects are real.

And yet there’s a twist to the information cards.

In typical Hirst fashion, he still manages to have a side swipe. Take the Grecian Nudes, for example.

The three torsos look a lot like the kind of nude torsos you might find in the British Museum. But look closer. Aren’t those unrealistic proportions a little, well, familiar?

A swift inspection of the back of torsos reveals the truth. The word ‘Mattel’ appears embossed just above the buttocks. These are not just nudes; they’re Barbie nudes.

Treasures from the Wreck of the Unbelievable lives up to its name. 2000 year old Barbie dolls truly are unbelievable. You’ll also find ‘ancient’ versions of Mickey Mouse, Goofy, Mowgli and Baloo, and even a self-portrait of Hirst himself.

On a cognitive level, you know these objects can’t exist. Yet you find yourself believing that they’re real because of the context of the exhibition. The storytelling frames it all.

There is a lot of repetition within the exhibition.

You will see the same piece repeated, often three times, in different materials or sizes. This is probably the point at which you realise you’re at an art exhibition, and not the kind of historical exhibition you’d find elsewhere.

Take Kali Fights A Hydra. First it appears on a small scale in a silver material at the Palazzo Grassi.

But then it also appears on a massive scale not once, but twice, at the Punta della Dogana. I tried to get both the plain black, and the faux-coral-encrusted version, in one shot.

They’re truly stunning sculptures. Indeed, I think Kali in all three forms is one of my favourite pieces in the whole Treasures from the Wreck of the Unbelievable exhibition.

See? I liked it so much I did a selfie with her. Kali is truly magnificent.

Another of my favourite pieces was The Severed Head of Medusa. She appears at least four times, in different guises. This malachite version truly caught my eye.

The movement in the snakes and the tortured expression on Medusa’s face are very arresting. But Hirst doesn’t restrict himself to Greek mythology. It’s in his Egyptian sculptures that he truly shines. Take this golden statue of Hathor.

Hathor represented joy, feminine love, and motherhood. Often depicted with the head of a cow, Hirst has chosen the form of a beautiful woman instead. By giving her the wings of Isis, and the armless/legless pose of the Venus de Milo, he’s created an artistic hybrid. His Hathor represents the feminine form across the ages.

Or consider the Unknown Pharoah.

This statue appears twice, in both palazzos. The version above is from the Palazzo Grassi, whereas the plain white Punta della Dogana version emphasises the nipple ring. Are piercings truly that ancient, or is Hirst again combining objects from antiquity with the signs of modernity?

Hirst explains the level of repetition in the exhibition guide. Apparently the sculptures encrusted in marine life have yet to undergo restoration. The ‘copies’ are a means of imagining what they’d look like post-restoration.

At Treasures from the Wreck of the Unbelievable, size matters.

If you go to the Palazzo Grassi first, the piece that greets you is the mammoth Demon With Bowl. Despite my best attempts, I couldn’t fit the whole statue into one single shot. The only way to capture the whole thing was to take a video.

It’s quite fitting that Demon is your first sight of the exhibition. It’s big, over the top, and a glorious statement of intent by a ballsy artist.

In a way, Treasures from the Wreck of the Unbelievable is a form of modern Surrealism. Take two things that have never co-existed and put them together in a new way. Hirst’s strength is the ability to do so in subtle ways that might bypass some viewers.

For the strength of these pieces lies in the ‘Oh I didn’t notice that’ double-take that these little touches provoke.

I spent an hour wandering around the Palazzo Grassi, and another hour at the Punta della Dogana. For an 18€ ticket, that’s incredibly good value for money.

If you’d like to see Treasures from the Wreck of the Unbelievable, it’s on until December 3 2017. You can buy your tickets from the Palazzo Grassi website.