Here in the northern hemisphere, autumn is certainly one of the most stunning seasons. We watch the trees discard their summer finery while the world prepares for the slumber of winter. In 1819, John Keats considered it to be the season of “mists and mellow fruitfulness”, and waxed lyrical about the ripe fruit, and the specific songs of autumn that differ so vastly from the songs of spring. 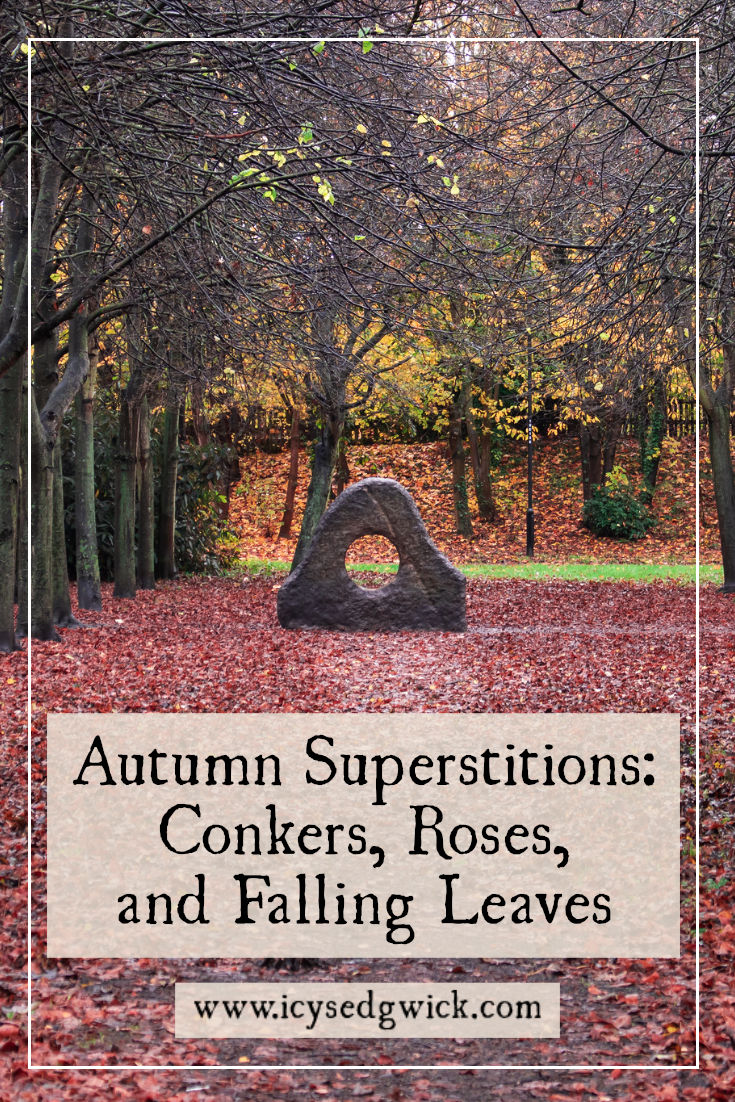 The natural world shuts down and in earlier times, this was the period when people needed to gather as much food as possible before winter set in. With plants dying back and the possibility of hard times ahead, it’s unsurprising that there are a range of autumn superstitions and omens about the months to come.

Let’s explore them in this post! Hit ‘play’ to hear the podcast episode or keep reading below…

Michaelmas, of the Feast of Michael and All Angels, falls on 29 September. It’s one of the quarter days, alongside Lady Day on 25 March, Midsummer on 24 June, and Christmas on 25 December.

In years gone by, harvests needed to be completed by Michaelmas. This marks a good way to cross off one part of the farming calendar before you move into the next one (Johnson). This was also the time of the year when the gentry hired new staff, or when debts must be paid.

It’s also why school and university terms start in September in many countries.

That said, people stopped celebrating Michaelmas as the end of the harvest when Henry VIII broke away from the Catholic Church. Harvest Festival became the time to celebrate the harvest instead.

Speaking of which, the full moon nearest the autumn equinox is called the Harvest moon. In 2020, that was on October 1. We actually get two full moons in October this year, meaning the second a blue moon. It’s also on Halloween!

Yet Old Michaelmas Day falls on 10 October. This is apparently the day when Lucifer fell from Heaven. According to the folklore, he landed in a blackberry bush. He cursed the fruit and spat on the bush. That’s why you shouldn’t eat blackberries picked after Old Michaelmas Day.

As with many things in folklore, this is based in good sense. Blackberries end up fly blown after this point and they’re not safe to eat any more (Struthers 2009: 66). What better way to warn people off mildewed blackberries than saying Lucifer had spat in them?

Incidentally, it’s good practice to put a blackberry bush by your door. Any passing vampires will stop to count them all, so they won’t bother trying to come into your house. This one contradicts the idea that vampires have to be invited in. Yet it also brings a new meaning to the name, ‘The Count’.

Horse chestnut trees aren’t native to Britain. They were introduced from the Balkans, which is why you find them in parks and gardens but rarely in woodland. That said, they do still bring us a little folklore, especially during the autumn!

In the UK, horse chestnuts are usually called conkers and they’re used to play a game. The first recorded game of Conkers dates to 1848 on the Isle of Wight. I won’t attempt to give any definitive rules as they vary around the country.

Put simply, you thread a conker onto a piece of string. You face off against your opponent who also has a conker on a string. Then you try to flick your conker at your opponent’s conker. Whichever conker breaks first loses.

Don’t just pick up the first conkers you see. Put the heaviest and fattest conkers you find in a bowl of water. Discard any that float because it means they’re not solid inside (Struthers 2009: 135). Less ethical players might soak their conkers in vinegar, salt water, or paraffin to harden them. You can also bake unsoaked conkers for 30 minutes – but that would be cheating (Struthers 2009: 136).

According to autumn superstitions, carrying conkers in a pocket would help ward off arthritis. Even better, if you had three shiny conkers, carrying those would make sure you always had money.

Putting conkers around your house is supposed to repel spiders. Others have used them to deter moths too (Roy 2010)! Rachel Hoskins notes there’s no evidence to show it works for spiders. That said, conkers do contain triterpenoid saponin which has an anti-insect effect. This chemical is released as the conkers dry out, so add fresh conkers to your wardrobe! (2019)

Other folklore suggests they should be carried to ward off headaches and rheumatism. Conkers do contain aescin, which acts as an anti-inflammatory. In the past, it’s been used to treat bruises and sprains (Hoskins 2019).

There are plenty of omens around the autumn. After all, it was a dangerous time of year for our forebears. A bad harvest could mean the difference between life and death. So they had a range of autumn superstitions to watch for.

As Emily at groweatgift notes, if the leaves fall early, we’ll have a mild autumn and winter. But if a cold August follows a hot July, expect a cold winter (2017).

Martinmas, or the Feast of St Martin, falls on November 11. Warm weather on St Martin’s Day means we’ll have a harsh winter. By contrast, a wintry day on Martinmas means a mild Christmas.

Apple trees blossoming in autumn meant a death in the house of whoever owned the tree (Radford 1949: 18). This also applies to cherry trees.

You’d need to check the thickness of the skin on your onions too. If it’s thick by the end of autumn, expect a cold winter. Thin skins imply warm winters.

Be careful about flowers blooming in autumn; “If roses and violets flourish in the autumn, there will be an epidemic of disease the following year” (Radford 1949: 204). In western Scotland, white roses blooming in autumn mean there would be a death in the family. But red roses meant a marriage was on the way.

You may have seen a belief that if you caught a leaf falling from a tree, you’d avoid head colds in the winter. You needed to preserve it until you saw the new buds on the trees the following spring (Radford 1949: 85). Edwin Radford related an anecdote in which he saw an elderly couple catching falling oak leaves in Hyde Park. They insisted they’d done so on a yearly basis and had never had a cold.

A variation on the belief encourages you to catch more than one leaf. Each leaf caught represents a lucky month in the following year. I am absolutely up for testing this one. You know, for science.

Lost in the Dark Peal

Many of the omens attempt to stave off death or misadventure. One lovely local legend actually celebrates a death avoided! The 7 October marks the Lost in the Dark Peal at Twyford Church in Hampshire. Back in 1754, a local man named William Davis got lost while riding home at night. According to the tale, he almost rode over the edge of a cliff. Thankfully, he heard Twyford’s church bells toll in the darkness.

The sound came from a different direction than he expected. Realising he was going the wrong way, he pulled up his horse to figure out where he was. At this point, he noticed the cliff edge and the epiphany hit him. Had he not stopped, he and his horse would surely be lying broken at the bottom of the quarry.

Davis left money to the church so they could ring a peal of bells every year. The tradition has continued ever since, with the bells rung before 9:30 am and around 7 pm!

This range of autumn superstitions and omens all point to the dangers of life in past centuries. Many of them are also rooted in observation, though the effects are less keenly felt now. In an age of central heating, refrigeration, and the import of food stocks, we’re less dependent on our surroundings.

But that doesn’t mean they’re not dependent on us. Remember to leave out seeds or fat balls for your local bird population – ideally somewhere cats can’t get to them. Always check your bonfires for hibernating hedgehogs before you light them for Bonfire Night in November.

Get your guide to protecting your home with folklore methods below!

Hoskins, Rachel (2019), ‘Do conkers keep spiders away? And other conker facts and uses’, Woodland Trust, https://www.woodlandtrust.org.uk/blog/2019/08/conkers-spiders-and-facts/.