Moths aren’t exactly popular insects. Within folklore, they’re typically viewed as either messengers from the dead or symbols of death. Some of the symbolism crosses over with that of the butterfly. It’s easy to see why they get muddled up. Both butterflies and moths belong to the Lepidoptera family. 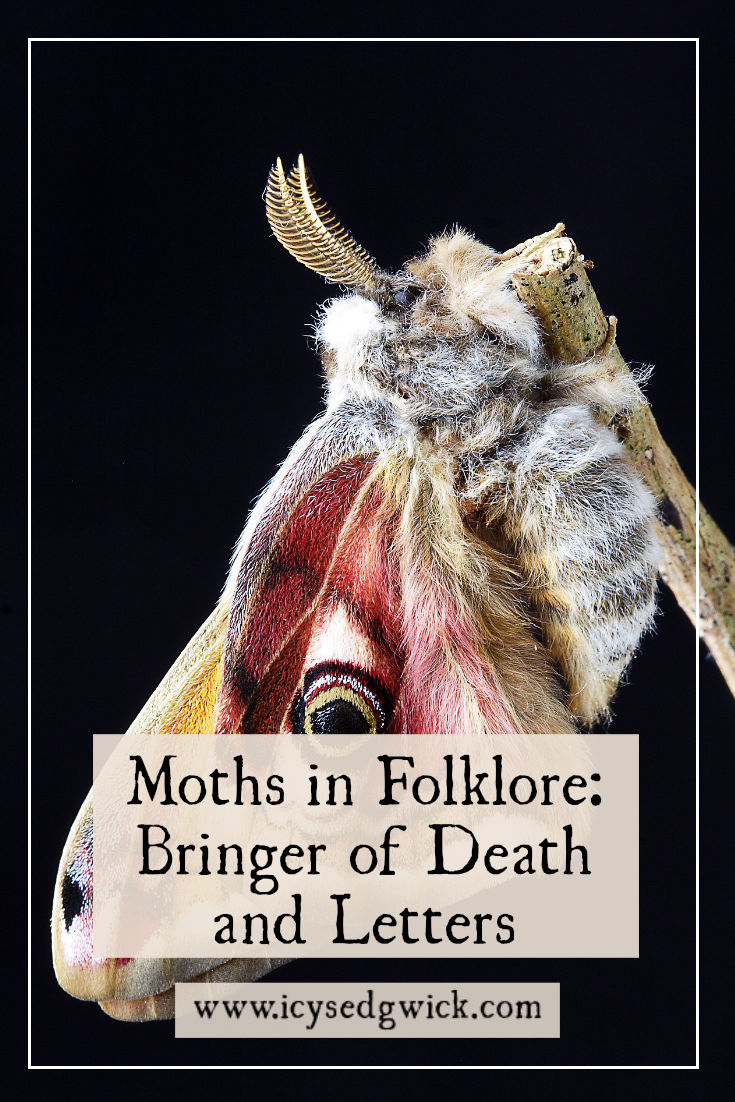 T. R. New points out that people often like butterflies and dislike moths. This boils over into folklore, “with butterflies viewed as ‘fairies’ and moths as ‘witches'” (2013: 95).

Moths evolved first, and fossils suggest moths might be 200 million years old (Martill 2018). Like bats, they’re also subject to plenty of myths too. The adults won’t eat your clothes or ruin fabric because they feed on nectar (though the larvae will chew through them).

So what else can we learn about these much-maligned insects? Keep reading or hit play below to listen to the podcast episode!

Does the colour of a moth matter?

According to the Otherworldly Oracle, in Appalachian folklore white moths meant ancestors were present (2019). Butterfly Insight points out the Goajiro of Columbia believed the same. If this moth became a nuisance, the family needed to take great care when removing it. Otherwise, the spirit might come back to take revenge (2018).

Black moths are more difficult to classify. Some think they represent death, and we’ll look at two of those below. Others think black moths signify spirituality or Universal mysteries.

The Otherworldly Oracle also says brown moths represent the need to cleanse your life. She compares their tendency to eat anything from your pantry or closet to a symbolic form of cleansing. Butterfly Insight agrees, saying they “represent the process of slow, unseen destruction of the things we cherish the most” (2018). Who knows, maybe Marie Kondo took her inspiration from brown moths?

The Otherworldly Oracle also says brown moths are a sign to be cautious about who you trust (2019).

Butterfly Insight notes the symbolism of the moth being drawn to light (2018). While we see them fluttering around lightbulbs now, in earlier times this would have been naked flames. This attraction to light becomes a desire for inspiration or enlightenment. However, this could have spelled the end for the moth if it got too close, representing the danger of devoting yourself to learning to the exclusion of everything else.

Or is there a darker side to moths and flames? Of course there is – this is folklore we’re talking about! There’s a superstition that if a moth flies to a candle and puts out the flame, it means someone in the house will die (Daniels and Stevans 1903: 665).

Let’s take a look at two of the more ‘notorious’ moths that regularly pop up in folklore.

The Ascalapha odorata, or black witch moth, is found in the southern United States, down to Brazil. In Central American folklore, it usually represents death or misfortune, especially if it enters the house of a sick person (Quinn 2008).

The associations aren’t all bad. Mike Quinn points out that they represent death in Hawaii, but they also symbolise the soul. So if you see one shortly after a loved one’s death, it is the soul returning for a final farewell. They’re known as money moths in the Bahamas. So if they land on you, money is on the way. And if one lands above your door in south Texas, you’ll win the lottery (2008).

In the Bahamas, where they are locally known as money moths or moneybats, the legend is that if they land on you, you will come into money, and similarly, in South Texas, if a black witch moth lands above your door and stays there for a while you will supposedly win the lottery (Quinn 2008).

If you’ve seen The Silence of the Lambs, then you’ve seen the Death’s-head Hawk-moth. It’s so named because the markings on its back resemble a skull. Their scientific name is the Acherontia atropos, Atropos being the third of the Greek Fates. Where her sisters spun and measured the thread of life, she snipped it off with her great scissors. The Acheron part of its name refers to the River of Pain in the Greek underworld.

There are two other types of moth in the Acherontia family: the A. styx, named after the River Styx, and the A. lachesis, the Fate who measures the thread of life. To add to its deathly reputation, the larvae also feed on deadly nightshade.

They appear in art and literature as bad omens. Dracula sends them to Renfield in Dracula. According to Butterfly Conservation, one is a prophecy of doom in Thomas Hardy’s The Return of the Native (2014). Pre-Raphaelite artist William Holman Hunt uses one as a love token in his painting, ‘The Hireling Shepherd’. It’s shorthand for saying “this relationship is a bad idea”.

One rumour claims King George III suffered one of his bouts of ‘madness’ after someone found two of the moths in his bedroom. No one knows if the king ever saw them, but their fearsome reputation preceded them.

According to Cora Linn Daniels and C.M. Stevans, having a moth flying around you at night meant you’d get a letter (1903: 665). I found several websites that related similar beliefs. For some, simply seeing one implied an important letter was on the way.

Daniels and Stevans include a belief that moths are angels – which makes a change from them being doubled with the soul. Following on from this, if a moth flutters around a light it means “the immortals are wishing the watchers well” (1903: 665).

They relate a further superstition that if moths get into your house, they represent “enemies who are doing you great injury” (1903: 665). It can also be an omen you’re about to argue with your lover.

Daniels and Stevans also share a belief from Virginia and Maryland that if a moth spins a cocoon in your house, someone will die. If it does this among your clothes, you’ll wear a burial shroud within a year (1903: 665).

We surely couldn’t finish a post on moths without looking at the Mothman. Let’s head to Point Pleasant, West Virginia. Between November 12, 1966, and December 15 1967, various reports claimed to have seen a mysterious creature. To some, it was a humanoid-figure, and others described glowing red eyes. All the reports noted its huge wings.

Couples reported seeing it following their car as they drove past a former munitions plant. In an article in the Point Pleasant Register, two of the eyewitnesses said the figure apparently wanted to avoid their car headlights ([1966] 2005). Not very moth-like, is it?

One eyewitness blamed it for the disappearance of his German Shepherd dog. A local sheriff and a biologist believed it was a heron or a sandhill crane (AP 1966: 7). The crane sounded like a particularly good match, due to its seven-foot wingspan and red markings around its eyes.

The Mothman may have never made it beyond the local news if it wasn’t for a tragic accident. The Silver Bridge collapsed, killing 46 people. At this point, people connected the collapse and the sightings. People believed the Mothman only appeared before tragedy struck, turning the figure into a bad omen.

John Keel’s book The Mothman Prophecies in 1975 helped to popularise the legend. It became a Hollywood film in 2002. Folklorist Jan Harold Brunvand didn’t exactly dismiss the tales, but hinted that something genuine might have sparked the hysteria. Once it got tied up with existing folklore, the story took off.

Others pointed out the number of hoaxes that appeared after the original sightings. People tried to rationalise what had been seen. As an example, the Mothman’s glowing eyes could be replicated by shining lights at animals with reflective eyes.

Let’s not forget Mothra. This fictional Japanese creature first appeared in the film Mothra in 1961. Sometimes she appears as a huge caterpillar, other times as a moth. Could this strange cinematic creature be a subconscious influence?

What does the Mothman have to do with moths?

In all honesty, probably nothing. Many of the reports seem more concerned with the figure’s resemblance to a bird. But the fact it evolved into a moth man is still important to the development of the legend.

People connected the sightings to the bridge collapse through a form of premonition. The Mothman became seen as a harbinger of doom. Would they have been able to make this connection if it wasn’t for the associations between moths and death?

Despite the range of sightings, the red eyes and moth wings remain constant. They dominate the huge statue of the figure in Point Pleasant.

It does seem strange that a figure so wholly based on moths would try to avoid the car headlights. And despite the high number of believers, it’s unlikely the Mothman really exists. But he does act as a focal point for our fears about moths and their mythical ability to bring death.

How do you feel about moths? Let me know below!

New, T. R. (2013), ‘The entomological and recreational aspects of interacting with Lepidoptera’, in Raynald Harvey Lemelin (ed.), The Management of Insects in Recreation and Tourism, Cambridge: Cambridge University Press.