If you know where to look in Venice, you’ll find a special brick heart. But what does it have to do with a fisherman and a mermaid? 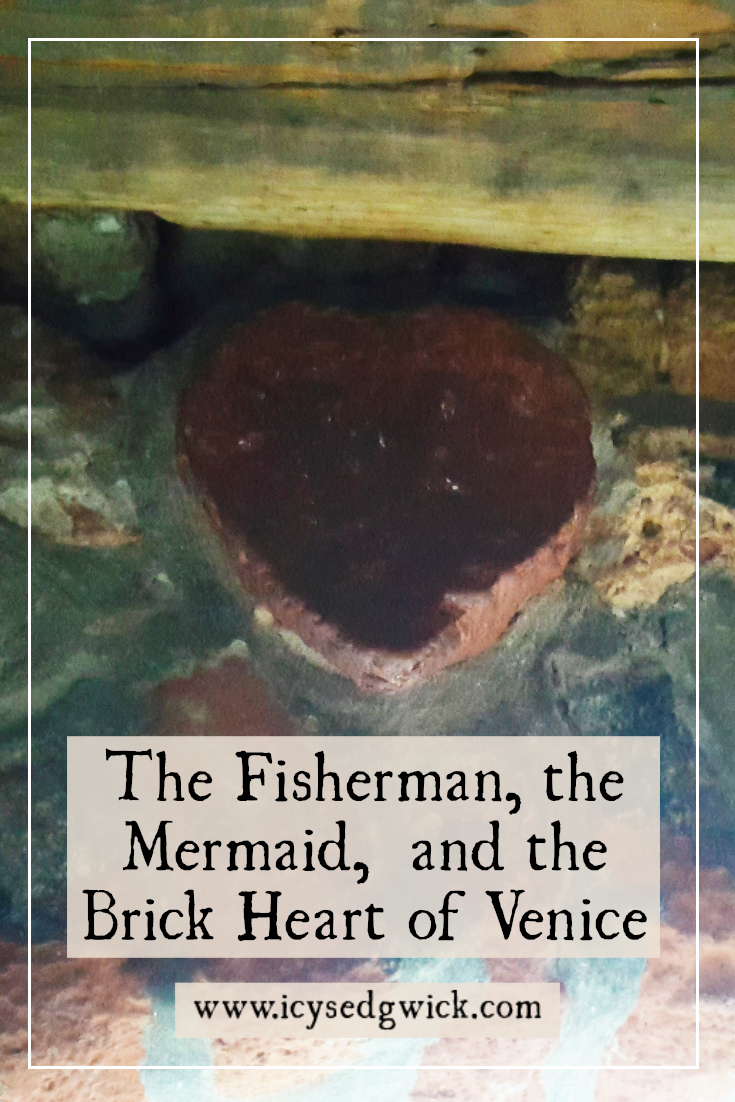 Before we get to the brick heart, let’s take a look at the legend.

A Fisherman gets more than he bargained for

A young fisherman named Orio used to cast his nets at Malamocco. One night, he struggled to drag the unusually heavy nets into his boat. A sweet voice asked him to set the speaker free, and Orio dropped the net in fright.

Two female hands gripped the side of his boat, and a girl’s head popped up beside him, his net draped over her.

Orio asked her if she was a witch. The girl laughed and explained that she was a mermaid, nothing more. She flapped her fish’s tail to prove it. Named Melusina, the mermaid’s beauty caught Orio’s attention.

They talked until dawn, and Melusina promised to return to the spot the next day. They met there every night, and just before dawn and Melusina’s departure, Orio found his nets completely full.

Orio proposed several times and eventually, Melusina agreed to give up her tail for human legs. There was just one condition. Until they were married, Orio shouldn’t come to see her on a Saturday.

He agreed, and for two weeks stayed away on the appointed day. But on the third Saturday, he couldn’t help himself and headed to their usual spot. He waited for hours, but no one came. As he got up and prepared to leave, a giant sea serpent appeared.

Terrified, Orio ran away. A familiar voice called after him, berating him for breaking their bargain. Melusina explained she’d been cursed to become a snake on Saturday. Yet if he still married her, it would break the spell and she’d become beautiful again.

Happily ever after? Not quite.

The couple married and for a time, all was well. They were happy and had three children together. Orio always filled his nets and the family never wanted for food.

Sadly, Melusina grew ill and died. Just before she passed away, she asked Orio to bury her at sea where they’d met. Orio did so and mourned the loss of his wife.

Yet that isn’t the end of the story. Someone kept cleaning the house and caring for the children. Orio wondered if a neighbour was sneaking in to take care of the family.

One Saturday morning he came home early. He found a giant snake in the kitchen. Clearly forgetting the last time he’d encountered such a creature, he snatched up an axe and lopped off its head. Orio thought he’d saved his family.

The housework stopped being done. No one cared for the children while Orio was away. It dawned on him what he’d done.

He’d lost Melusina forever. The brick heart marks the site of their house and immortalises their love.

An island city like Venice can’t help but have mermaid legends. I wondered if Damien Hirst knew about them when he created Mermaid, the gorgeous statue at the Punta della Dogana in his Treasures of the Wreck of the Unbelievable exhibition (reviewed here).

She’s outside the palazzo, and you can see her by simply walking along the narrow quay beside the building. She overlooks the Lagoon.

This point is also the site of another folk tale. Legends talk about a sea creature that lives in a hole beneath the Punta della Dogana. The monster only appears on moonless nights. 1933 marks the last sighting when two fishermen were hunting squid during the new moon. They watched it catch seagulls before it disappeared back into the Lagoon.

If you’re interested in Venetian monsters, I created my own for an anthology devoted to European monsters. You can find my contribution, ‘The Cursed One’, in European Monsters on Amazon (aff link).

How to find the Brick Heart

Head for the Castello district of Venice. From the Riva degli Schiavoni, take the calle del Dose to the campo de la Bragora. Cross the square diagonally and head along the salizada del Pignater. Partway along, you’ll see a low archway on your right.

This is the sotoportego dei Preti.

Head underneath the arch and turn around. You’ll see the brick heart above your head.

Legend has it that if two lovers touch at the charm at the same time, their love will last for eternity.

Don’t worry if you’re on your own. You can still touch the brick heart and wish to find love. If you do it in all seriousness, your wish will be granted within a year.

(Yes, I touched it too! For science!)

Would you touch the brick heart? Let me know in the comments!