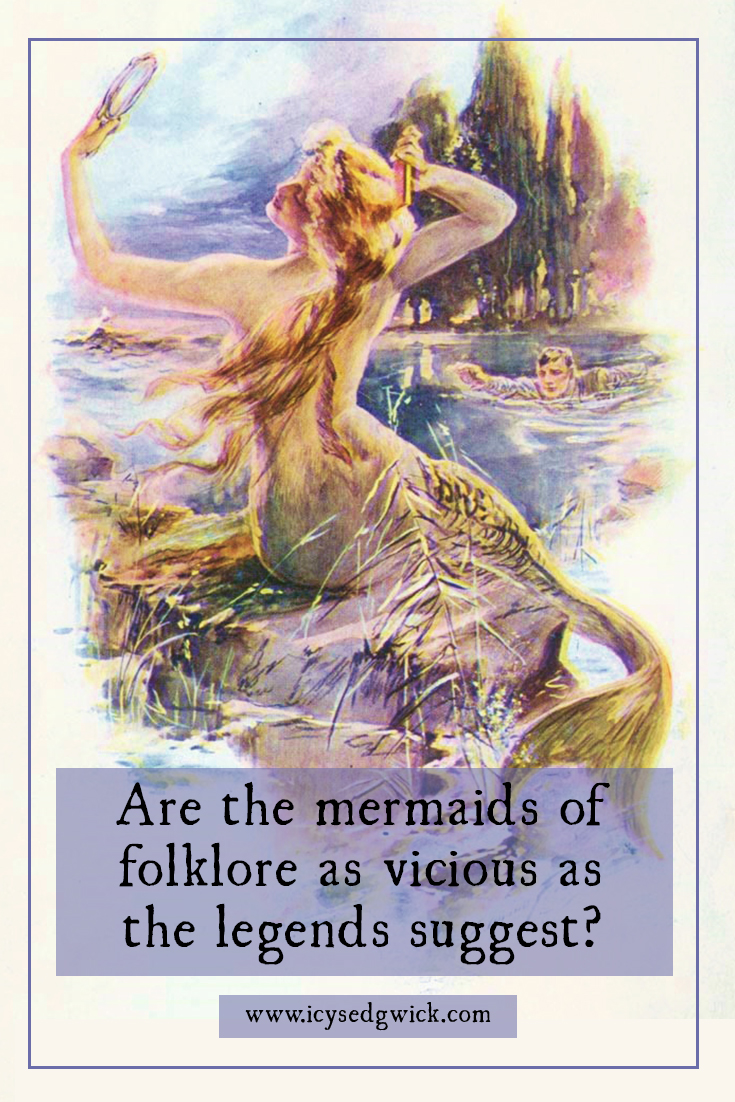 Or maybe they’ve been keeping up with the casting news for Disney’s live-action remake of The Little Mermaid. Congratulations to Halle Bailey for landing the role of Ariel!

Hans Christian Andersen originally published his ‘Little Mermaid’ fairy tale in 1837. The story added a softer side to these folkloric creatures. The Disney version further sanitised mermaids, even turning Triton into the ruler of the sea.

In Greek mythology, Triton is the son of Poseidon, god of the sea. He’s more of a herald or messenger. He also gives rise to a whole host of Tritons, sea-dwelling creatures that escort marine gods and goddesses.

They entered European mythology via the writing of Pliny the Elder. He described the nereids, water nymphs who were half-fish, half-human. Some of the stories confused mermaids with sirens, which we’ll talk about next week.

Pliny also discussed ‘sea men’, who climbed up onto ships under the cover of night. Their weight caused boats to sink. In general, people believed mermen to drown sailors, call up storms, and sink ships.

But we’re going to go on a whistle-stop tour of mermaid folklore and legend! Try not to get distracted by their alluring charms…

As ever, hit play to listen to the podcast episode, or keep reading! And why not support this blog and podcast for just $1 a month on Patreon?

After their debut in Greek mythology, mermaids make their way into the lore of the Middle Ages. A 15th-century Nuremberg Bible features a woodcut depicting mermaids frolicking in the water around Noah’s Ark. Clearly, mermaids weren’t bothered by rising sea levels caused by the Flood.

I’ve actually written about European mermaids before. There’s the tale of the fisherman, the mermaid and the brick heart of Venice. Or the mermaid of Doxey Pool between Derbyshire and Staffordshire. Speaking of Britain…

The name comes from mere, the Old English word for the sea, and either maid (woman) or man.

In Seduction and the Secret Power of Women: The Lure of Sirens and Mermaids, Meri Lao refers to the beautiful maidens who live in the sea around the Shetland Islands.

She describes them as shapeshifters, wearing the skin of a fish in water, and human on land. If they lose their fish skin, they can’t return to the water.

This sounds a lot like the folklore around selkies. Swap the fish skin for a seal skin and the tales are very similar.

Clerk Colvill and the Mermaid

The Ballad of Clerk Colvill and the Mermaid is an incomplete English ballad about, you guessed it, a mermaid. I should point out, there are variations on the tale.

But at its heart, it’s about a man named Clerk Colvill. His wife advises him to stay away from water. He ignores the advice and meets a mermaid. She seduces him and he ends up with a colossal headache. In some versions, he leaves her and dies at home. In others, she offers him the chance to save himself by going to sea with her. He refuses and dies anyway.

The ballad is unfinished – whichever version you read, there’s clearly part of it missing. What happens between Clerk Colvill and the mermaid? We’ll never know. Some see the headache and subsequent death as punishment for his infidelity. If so, the mermaid isn’t harming him to be malicious. She even offers him a ‘get out clause’, but he doesn’t take it.

But he pursues a mermaid while his wife waits at home. This underlines the way many mermaids are portrayed as overtly sexual, luring men to untimely ends.

If you head to France, Luxembourg, Albania or Germany, you might see the symbol of Melusine.

In most versions of the story, a king marries a fairy. She makes him promise not to visit her if she has children. Naturally, he forgets and goes to see her after she gives birth to female triplets. The fairy takes her daughters and leaves him because he broke his word.

Fifteen years later, she tells the girls why they don’t live with their father. The eldest daughter, Melusine, hatches a plan. She and her sisters shut their father up in a mountain in revenge. Their mother isn’t impressed and curses Melusine to take the form of a serpent from the waist down every Saturday. In some stories, it’s a fish’s tail.

As this is a fairy tale, it all goes wrong for her. Her husband spies on her on a Saturday and realises the truth about her. He casts Melusine out and she spends her days wandering around looking for redemption. The Lusignan royal house in France claimed to be her descendants.

I found this Melusine at Château du Haut-Koenigsbourg in Alsace in 2017.

Does the dual-tailed mermaid look familiar? Take a closer look at a Starbucks logo…

The Netherlands also has its own mermaid story from the early 15th century (I’ve seen 1403 cited). According to the legend, she ended up in Edam after a storm broke a hole in a dike. She couldn’t get back out again and eventually, the townsfolk got close enough to clear the sea moss off her. They found she was a regular woman underneath and ended up teaching her to spin. Apparently, she was even buried in the churchyard when she died.

It’s unlikely this example was an actual mermaid. Without a tail, it’s more likely she fell overboard and the storm washed her through the dike. But it’s nice to read a ‘mermaid’ story where she’s adopted by the local community.

The first recorded account of a Japanese mermaid goes back to 619. Someone apparently caught a mermaid and brought it to Empress Suiko. The Empress kept the mermaid in a tank to amuse visitors.

Elsewhere, you might encounter the kappa. These child-size mermaids are more like animals. They challenge humans to games and if you lose, you die. The kappa likes eating children and lone swimmers in desolate spots.

The ningyo is a Japanese version of the mermaid but they’re incredibly far removed from western concepts of the mermaid. Picture a fish with a human face. Often they’re shown with fangs or horns. Where they do resemble western mermaids, they’re more demonic or terrifying.

Catching a ningyo brings storms to your village, but eating one’s flesh gives you eternal youth and beauty. There’s a great article at Mysterious Universe about the ningyo.

Captain John Smith (yes, he of Pocahontas fame) apparently saw a mermaid off the coast of Newfoundland in 1614. He noted her long green hair that didn’t put him off finding her attractive. Even Christopher Columbus took a detour in 1493 to see a mermaid near the Dominican Republic. The admiral apparently saw one, though many now think he actually saw a manatee.

In fact, many people believe mermaid sightings were actually manatees or dugongs. Their flat tails are closer to the descriptions of mermaids than dolphins or seals. At a distance, or in low light, you can see why people would get confused.

And we cannot discuss mermaids without mentioning the ‘Fiji mermaid’, displayed by P. T. Barnum in the 1840s. Its upper body was that of a monkey, the lower body half of a fish.

An American sea captain actually bought the ‘mermaid’ in 1822 from Japanese sailors. He leased it to Barnum in 1842 to help raise publicity for the Boston Museum.

As part of this publicity stunt, Barnum created pamphlets detailing mermaids. Many people fell for the ruse, although it’s become something of a tired trope now. That didn’t stop The X Files doing an episode in which Mulder and Scully investigated a series of murders, potentially committed by one.

In 2009, people sighted a ‘mermaid’ off the coast of Israel. According to eyewitnesses, she had been lying on the sand and then took to the water when approached. Seeing her ‘tail’ made them suspect something might be amiss. The tourist board from the town of Kiryat Yam offered a $1 million reward for photos. No one has yet claimed the reward.

And you can’t really move online without some mention of mermaids. We’ve had mermaid themed makeup lines, mermaid tail blankets, and even mermaid swimming lessons. Even the Queen of Cups in some Tarot decks is depicted as a mermaid.

Here, her mermaid appearance helps to represent how in touch with her emotions and intuition she is. She’s the embodiment of the positive qualities of water. So the designer of the Everyday Tarot deck chose the mermaid as the ultimate symbol. Many of these things focus on shimmery colours and an idea of luxury. Except this necklace I bought at Tynemouth Market.

So are mermaids vicious?

In the stories we’ve looked at, it’s a bit of an even spread. You’ve got the mermaids of the Shetland Islands, who like shapeshifting. And the apparent Israeli mermaid who favoured sunbathing over luring anyone to their death.

But then you have the Japanese mermaids, who will snack on the unwary. Or the legions of tales about the mermaids who would lure you off course, or raise a storm.

In some legends, mermaids distract sailors to run ships aground on purpose. In others, the mermaids attempt to save sailors but accidentally drown them. Apparently, the mermaids either don’t know or forget that humans can’t breathe underwater.

It’s more likely that mermaids came to represent a fear of water – especially the sea. In an era when the cause of storms wasn’t understood, blaming mermaids could seem to provide an answer. Add to that any delirium caused by ingesting sea water or spending long periods of time at sea without any shade? You’d start seeing all sorts, and probably hear things singing to you too…

But what do you think? Have you got any mermaid stories? Let me know below!

And be sure to sign up to get notifications of these posts in your inbox. I’ll also send a guide to help you protect your home using folklore.