While holly, ivy and mistletoe might be the most obvious Yuletide plants, there is one more that bears a festive name – the Christmas Rose.

Only it’s not a rose at all. It’s a hellebore. A black hellebore, to be precise.

Black hellebore is actually named for the colour of its roots, not its petals (Inkwright 2021: 131). Witchipedia also notes that Helleborus orientalis is likely to be the black hellebore described in Greek myths (Morningbird 2019). It just goes to show that you have to be careful when you’re looking at these old tales of plants!

And just to confuse you even further, Coby Michael Ward notes the hellebores are actually part of the Ranunculaceae family, which also includes buttercups (2018).

Glad we’ve got all that cleared up! Let’s dig into the magical, medieval, and malicious uses of hellebore, aka the Christmas Rose!

Ancient physicians used hellebore to cure gout and paralysis, though the toxicity of the plant means it can cause vertigo, tinnitus, extreme thirst and swelling of the throat and tongue. They’re the mild symptoms – in extreme cases, it can bring on heart attacks and death (Eade 2009).

According to Margaret Baker, Black Hellebore could cure insanity, melancholy and other mental health issues, a fact noticed by a Greek shepherd named Melampus. He saw the effects it had upon his goats, and when the daughters of King Proetus of Argos suffered from “mental afflictions”, Melampus bade them drink milk from his goats. This apparently cured the issue (2011 [1969]: 74).

Ward actually notes that Melampus was a physician, not a shepherd, and he cured King Proetus’ daughters of their madness, which had been induced by maenads. It’s worth noting that the maenads were followers of Dionysus, so what one person might perceive as madness could also be seen as divine ecstasy (2018). That said, another version of the tale is that Hera drove them mad after they insulted her, and in yet another version, Proetus cured his daughters after praying to Artemis (Britannica 2011).

Fez Inkwright points out that no one really knows where this story came from, so there’s no way to check its veracity. Herbalists in the 16th and 17th centuries repeated it as fact, writing of the use of hellebore to cure insanity (Inkwright 2021: 133).

Medieval doctors might burn the powdered leaves and roots to calm people during moments of frenzy (Ward 2018). This could help to explain its association with tranquility, or the removal of anxiety.

S. Theresa Dietz also notes that some people think physicians used Black Hellebore to treat Alexander the Great, only the treatment killed him (2020: 106). That said, other writers say the False Hellebore holds this dubious honour. Leo J. Schep, Robin J. Slaughter, J. Allister Vale and Pat Wheatley did some digging through ancient literature, and concluded that white hellebore (Veratrum album) was most likely to blame (2013).

But hellebores are poisonous…

All parts of the hellebore are extremely poisonous. Even smelling the plant can irritate the nasal passages (Inkwright 2021: 132). This perhaps explains why gathering the roots had such a complicated procedure. Those doing the gathering had to draw a circle around the plant with a sword, before eating garlic and praying to Apollo and Aesculapius while lifting the plant. Prayers to Apollo, the god of healing, and Aesculapius, the god of medicine, would appear to support any healing properties of the plant (Baker 2011 [1969]: 74).

Though it was popularly used in ancient warfare.

Troops from Athens placed the town of Cirrha under siege in 585 BC, and cut off the town’s water supply by blocking access to their canal. This failed to break the siege, so bundles of hellebore were left to steep in the canal before the blockage was removed. When the tainted water flowed into the town, the defenders made good use of it. They became so sick from drinking the water that they couldn’t hold the walls, and the Athenian troops broke the siege after all (Inkwright 2021: 132).

The Gauls apparently rubbed hellebore juice onto hunting arrows to make any game more tender (Baker 2011 [1969]: 74). I’m not sure how we would know that, and given the deaths recorded from people drinking water tainted with hellebore root, it’s also unlikely.

According to Robert Graves, the Irish Celts rubbed a mixture of hellebore, devil’s bit and yew berry onto their blades before battle (Inkwright 2021: 132). That said, we should always be wary of such proclamations about the Celts given the lack of written evidence.

The plant stopped being used in warfare, though it gained a new lease of life in pest control. The powdered version could cut down mouse populations in afflicted homes (Inkwright 2021: 133). There were folk tales that armies hired sorcerers to help them on the battlefield, and they cloaked themselves with clouds of powdered hellebore to render them invisible (Inkwright 2021: 133). Given how much hellebore can irritate both the skin and nose, I’m not sure how that would even work.

Ward relates a myth that a girl visited the Christ child, but she had no gift for him, and the Christmas rose grew from her tears. This helps to explain why the plant is considered holy in Christian plant lore (2018). Other varieties of the story explain that the girl was too poor to buy a gift for Jesus (Eade 2009).

There’s an extra story to explain its name as the Christmas Rose. According to Simon Eade, a single black hellebore was found growing in an English abbey in the 1500s. People believed St. Thomas himself established the abbey, and using the Julian calendar, the hellebore bloomed around January 6, the original Christmas Day (2013).

In Dorset, people planted the Christmas Rose by the front door to welcome Christ into the house. Apparently, the plant thrived in such a position (Baker 2011 [1969]: 74).

In magical terms, hellebores are often put under the rulership of Mars and Saturn. The plant is also connected to the star Algol, which represents the head of Medusa in the Perseus constellation. If you want to learn more about Algol, then I highly recommend you connect with folk witch Amaya Rourke, who has an entire workshop dedicated to Algol in the works.

Both the hellebore and black hellebore enjoyed symbolic meanings included anxiety, peace, or scandal, and were strangely associated with tranquility too. You could apparently take a vase of hellebore into a room full of negativity, and the plant would displace the negativity with tranquility (Dietz 2020: 105-106).

This might explain why the guide to the plants in Alnwick Garden’s Poison Garden recounts the belief that hellebore is so poisonous that bringing them into your house could drive out evil spirits.

People believed hellebore could cure illnesses brought on by witchcraft. In the 1600s, people thought it could cure people of possession by the Devil (Inkwright 2021: 134).

There was also a belief that you could graft a hellebore onto another plant, which would give the plant unpleasant qualities, matching the hellebore. Ward points out this could be useful to curse portions of land, especially if you scattered powdered hellebore across the soil (2018).

Ward notes that where deadly nightshade was often connected with witches in medieval folklore, hellebore seems to be the equivalent for magicians (2018). Ward also notes that it’s difficult to germinate a hellebore, but they look after themselves once they get established. This explains why people planted them on graves in Europe (2018).

What do we make of the Christmas Rose?

The hellebore is a truly beautiful plant, and since it tastes so bad, poisonings are actually rare. I’d still avoid trying to use any in your practice unless a) you know what you’re doing or b) you simply want to enjoy one in your garden. (They like shade, by the way)

They create confusion since there are different members of the family. We see this confusion, particularly around whether the Christmas Rose poisoned Alexander the Great.

But their links with Christmas are indeed tenuous, whether that’s their origin from a crying girl visiting the baby Jesus, or flowering in an abbey. They’re also a plant to leave outside, and let them look festive in the garden!

If you want to learn more about the magical uses of poisonous plants, then check out Coby Michael’s The Poison Path Herbal: Baneful Herbs, Medicinal Nightshades, and Ritual Entheogens.

Eade, Simon (2009), ‘Stories, Myths, Legends and the Folklore of Hellebore’, The Garden of Eaden, https://gardenofeaden.blogspot.com/2009/01/stories-myths-legends-and-folklore-of.html.

Ward, Coby Michael (2018), ‘The Court of Helleborus: A Collection of Hellebore Lore’, The Poisoner’s Apothecary, https://www.patheos.com/blogs/poisonersapothecary/2018/06/11/the-court-of-helleborus-a-collection-of-hellebore-lore/. 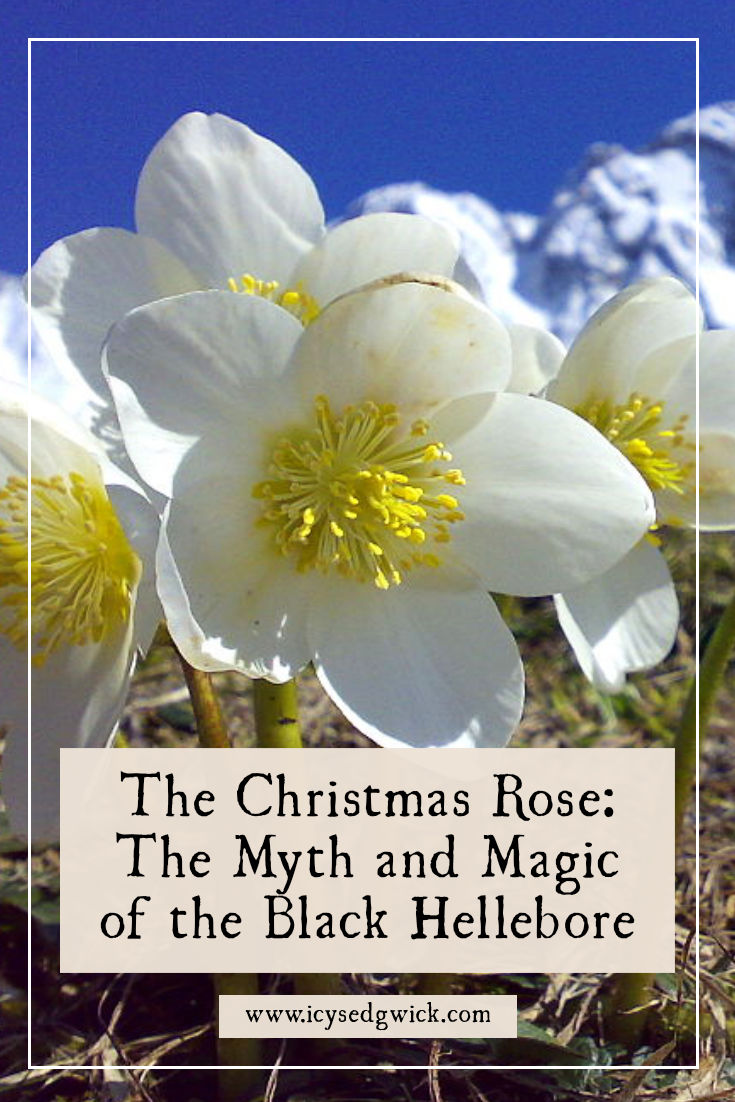