Elder trees are a common sight in the UK. Their frothy white flowers dip from hedgerows. Then the sprays of dark berries lend themselves to elderberry cordial or wine. 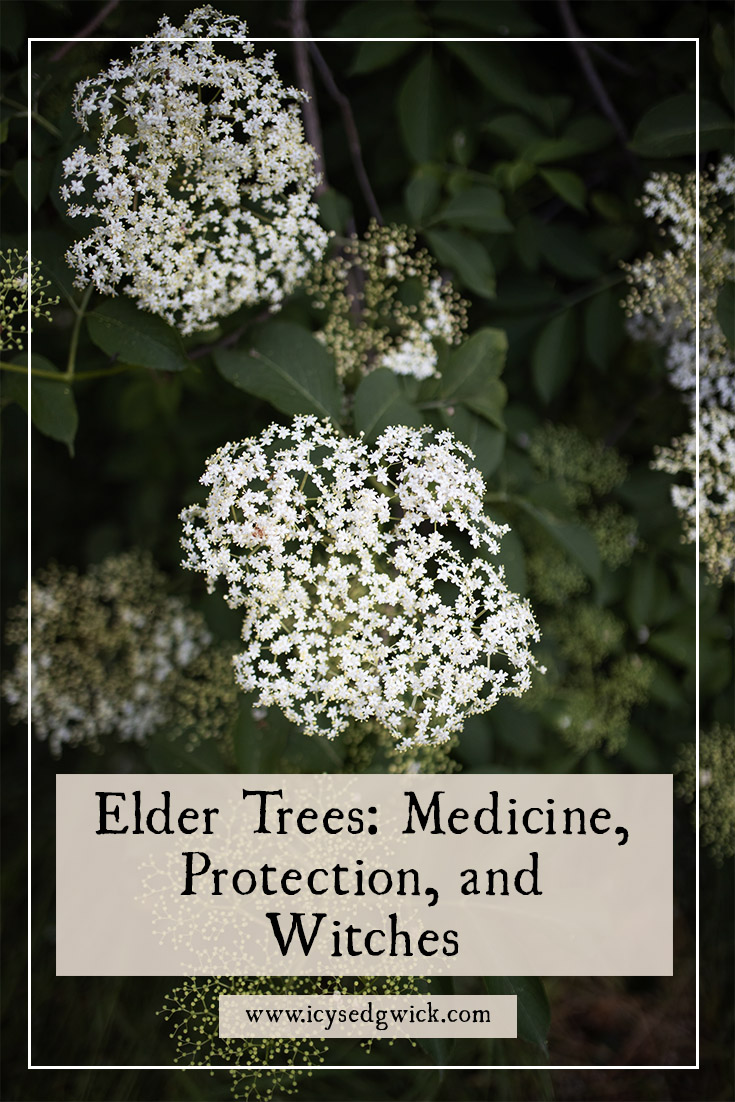 But there’s a stranger side to the elder tree. Beloved for its ability to protect one from witches, they’re also believed to be witches in disguise. Some of the lore praises and celebrates this beautiful tree. Other superstitions see it cast into a cursed role.

So which is it? Are both sets of lore right in their own way? Let’s go to meet the elder tree and find out.

Hit ‘play’ below to hear the podcast episode or keep reading!

Many superstitions and beliefs revolve around the protective aspect of the tree. This worked for both your own home and any farm buildings you owned. People planted an elder tree near their house to attract prosperity (Daniels 2003 [1903]: 782). They also apparently protected people from charms and witches. That said, this becomes problematic alongside other beliefs, as we’ll see later.

Don’t try that last one – no tree is safe during a lightning storm!

Paul Kendall notes that it was best to keep the rowan at the front door and the elder at the back by the kitchen door. The leaves give off an odour that repels flies, so this may be rooted in practicality. People also hung bunches of the leaves from horses’ harnesses or by barns for their fly-deterring nature (2020). People also planted the trees beside dairies and bakehouses, though the latter as protection from the Devil. Baked goods were left under the elders to cool. Anything left overnight was for the fairies (Kendall 2020). Again, this was likely rooted in practicality thanks to the leaves’ ability to deter flies.

As I mentioned earlier, people believed the tree offered protection against witches. One practice even lets you see witches. If you’ve been baptised, anoint your eyes with the green juice from the elder’s inner bark (Daniels 2003 [1903]: 783). Then you can apparently see witches. Incidentally, it was important not to linger under elder trees after dark because witches hide under them (Daniels 2003 [1903]: 782). Though I’m not sure how this works if you were also trying to avoid lightning.

But at the same time, witches apparently wore headdresses of elder blossom and elder twigs at May Day so the wearer could see spirits and undo any evil magic (Kindred 1996). Hm, this is already confusing. So I can use elder bark juice to see witches…but then I can wear elder twigs to undo evil magic? Very strange. It’s even more strange due to the widespread belief that witches could turn into elder trees.

It wasn’t just the twigs and bark that were helpful. Cora Linn Daniels relates a belief that you could pick elder berries on St John’s Eve (June 23rd) to avoid being possessed by witchcraft. Even better, you’d get magical powers too (2003 [1903]: 783).

The Elder and the Fairies

Then there are the links with the fairies. One belief from Germany said that if you fell asleep under an elder, you’d never wake up (Daniels 2003 [1903]: 783). If you stand under an elder on Midsummer’s Eve, you should be able to see fairies (Belvoir Fruit Farms, no date). Incidentally, fairies favour instruments made of elder (Kendall 2020).

Many superstitions note that you should never burn the wood. The wood is terrible fuel because it spits and screams while burning. People believed the spitting came from the Devil, meaning no one wanted to burn it (Kendall 2020). A gentleman bought a house near Andover and intended to turn a copse of elder trees into firewood. His keeper admonished him, telling him “folk won’t buy them bavins! They dursn’t burn ’em if you gave them away,-they don’t want the devil down their chimbleys!” (Heanley 1911: 236)

It was later cursed as being the tree from which Judas Iscariot hanged himself. If that wasn’t bad enough, some allege the cross used in the Crucifixion was made from elder. This is highly unlikely since the wood is too lightweight (Kendall 2020). This might explain a 19th century belief around the tree and the dead. Set an elder tree, cut into a cross, on a new grave. If it blooms, the soul has reached Paradise (Daniels 2003 [1903]: 783).

Few of these beliefs or superstitions make sense where they contradict each other. It’s also strange that a tree renowned for its medicinal properties and abilities to deter evil spirits was considered to be the wood used for the cross. Yet it just shows how such a useful and popular tree was ‘smeared’ for no real reason.

This leads us neatly onto the medicinal benefits of the tree. It’s one of those helpful natural wonders that offer a lot from each of its parts. Indeed, elder trees contributed plenty to medieval medicine. The roots were a diuretic, while the berries were used in preparations to soothe piles (Belvoir Fruit Farms, no date). Even now, an elderflower infusion helps to soothe colds and sore throats (Belvoir Fruit Farms, no date). Hot elderflower tea or elderberry wine is still said to help combat cold and flu symptoms (Kendall 2020).

And how about the fancy properties of the leaves? You could use them yourself. Glennie Kindred notes a simple technique to deter flies and mosquitoes. Make an infusion of the leaves and rub it into the skin (Kindred 1996). Poultices or ointments made from the leaves could also heal eczema or grazes (Simpson 2003: 108).

Speaking of skin, elder can even help you preserve your beauty and youth. Simply gather dew from elderflowers and wash your face in it (Kendall 2020). Because you’re worth it.

I mentioned earlier that some believed witches could take the form of elder trees. This may explain the belief that an elder would bleed, weep, and speak if you cut it (Daniels 2003 [1903]: 783). Others believe this is due to the Elder Mother who lives in the tree, not a witch. In some sources, she’s a dryad, in others, she’s some kind of fairy. Either way, she would avenge any injury done to the tree if no one sought her permission first (Daniels 2003 [1903]: 783).

This perhaps explains an old Danish belief that elder trees can move. Apparently, they would peek into your windows during the night (Daniels 2003 [1903]: 782).

But either way, the general belief counselled people not to cut down an elder tree. If the tree was cut down and turned into furniture, the dryad would haunt the owners. It was therefore especially unlucky to make a child’s cradle from elder. If you did, the dryad would attack the child so it couldn’t find any peace (Kindred 1996). This prohibition against cutting down the elder may come from its many uses. After all, if you have a tree whose bark, leaves, and fruit provide plenty of medicines and other consumables, would you want to cut it down?

Still, there is one story that might explain where the idea of elder trees being witches came from…

The Rollright Stones and the Elder Tree

The Rollright stones are already a confusing mystery. They’re a group of megalithic monuments on the Warwickshire/Oxfordshire border. They’re made up of an early Neolithic dolmen known as the Whispering Knights; a late Neolithic stone circle called the King’s Men, and an early-middle Bronze Age King Stone.

No one can ever count the stones. Whenever anyone tries, they come up with a different number.

But what have they got to do with the elder tree?

In the legend, a king took his army across the Cotswolds. A witch challenged him. If he could take seven strides and see Long Compton, he’d be King of England. He did so, but a mound blocked his view at his seventh stride. The witch turned them all into stone. He’s the King-stone, while the King’s Men ring refers to his army. The Whispering Knights dolmen were those knights plotting against him. The witch herself is a nearby elder tree.

Arthur J. Evans notes the confusion over which elder tree is the witch. Some think it was once near the circle, but was blown down. Others thing it was in a hedge near the King-stone. Yet others more said it was in the field by the mound. Evans does point out that elder is plentiful in hedgerows so you’re bound to find the tree in the area (1895: 20).

He also relates the fact that people believe the tree “bleeds”, proving it is a witch. According to the Rollright Stones website, if the tree is cut, it’ll break the spell and turn the stones back into men (no date). Evans relates an old custom that requires people to stand in a circle at the King-stone on Midsummer Eve. At this point, someone cuts the elder, which is in blossom. When it bleeds, the King-stone apparently moves (1895: 20). He relates other beliefs that people would cut the tree to make it bleed, thus diminishing the power of the witch.

For Evans, these superstitions link back to earlier times when dryad belief was more common. The elder tree here becomes a supernatural being (1895:21). This relates to another old belief that an Elder Mother lived in the tree’s trunk. As a result people wouldn’t cut the tree down.

Not likely. However, in 2015, a metal detectorist found the grave of a 7th century Saxon woman at the site. Nicknamed Rita, the grave goods buried with her suggested she was a high status spiritual woman (ITV.com 2015). This led some to remark on the possibility she was a pagan witch. Could she have been the Rollright Witch?

If so, it doesn’t explain why she was buried in the traditional fashion. The legend does specify she became an elder tree, after all.

So what do we make of the elder tree?

It’s strange to find a tree with such a balance of positive and apparently negative qualities. I can’t help feeling that its beneficial associations are more in line with its medicinal properties.

Or perhaps it’s just a reminder that you can be good and bad, depending on the context. And the context of the elder tree is set against a backdrop of folk medicine and magic, witchcraft and fairies. Witches and fairies can both do good or evil, so why would the elder be any different?

Fascinated by the tree’s ability to protect the home? Sign up below and get my guide to 5 ways to protect your home using beliefs from folklore!