Glass is a strange material. Its original source material is sand, but it needs human intervention through the application of heat and other processes to find form. We can see through it, but we can’t touch what’s on the other side.

You can use it to concentrate a light source. Or it’s helpful if you want to protect your eyes, but still see what you’re doing. Both solid and fragile, it can make art or poison bottles.

It often depicts tales of myth or religious instruction through stained glass in churches. And we can’t forget its appearance in fairy tales through glass coffins or slippers.

Let’s look at the folklore of glass in this Folklore of Materials series! We’ll explore how it appears in the world of superstitions, fairy tales, and even fairy lore.

The folklore of glass is teeming with superstitions. Dreaming about glass apparently referred to women. But if you dreamed you received a glass of water, a marriage or a birth would happen in your family soon (1 Daniels 2003 [1903]: 230).

If you dropped a glass while taking a drink, you would soon hear sad news. But if a glass fell and didn’t break, you’d have great success. There is another version which says you’d receive a present in this circumstance, and another that says your friends are loyal (1 Daniels 2003 [1903]: 454).

Turning a whiskey glass upside down was a death omen. Meanwhile, breaking a tumbler meant a secret would be discovered. If glass dishes broke on the pantry shelf, it was a bad omen. Glasses or pitchers that broke for no reason meant a death in the family (1 Daniels 2003 [1903]: 454).

This also applied to glass jars of preserves—if they cracked while being opened, it also meant a death in the family (1 Daniels 2003 [1903]: 463). I should point out, these death omen superstitions are largely western ones. In Pakistan, if you accidentally break a glass, it means evil is actually leaving the house, and good luck will arrive instead (Dartmouth Folklore Archive n.d.).

You would die within the year if a glass you were drinking from cracked. But if a man drank from a cracked glass, his wife would only bear him daughters (1 Daniels 2003 [1903]a: 454).

Napoleon and the Cracked Glass

The fear of broken or cracked glass was very real. So real that even Napoleon Bonaparte apparently feared them. He took a portrait of his wife Josephine with him on campaigns. During a campaign in Italy, the glass broke.

He feared her death so much that he sent a courier to check she was okay. Napoleon didn’t rest until the courier returned and assured him she was safe (1 Daniels 2003 [1903]: 484).

Even filling a glass was fraught with problems. If a glass was too full to take to the table, you could drink the first mouthful and make a wish. If you did, it would come true. Meanwhile, if you were in the habit of filling a glass to the point it overflowed, you would marry an intemperate person (1 Daniels 2003 [1903]: 454).

We can’t talk about the folklore of glass without discussing the Luck of Edenhall. It’s a decorated glass beaker, both gilded and painted. It’s now in the Victoria and Albert Museum, but it dates to mid-13th century Syria. Much of its early provenance is unknown, but it appears in various verses in 1729.

It came with a leather case, inscribed with the Catholic IHS monogram, and Jacqueline Simpson suggests earlier owners may have used it as a chalice (2003: 106).

By 1791, a legend emerged about its ‘true’ origins. According to an article in The Gentleman’s Magazine, a group of people discovered a party of fairies making merry near a well named St Cuthbert’s Well. The humans scared the fairies, so they ran off, leaving behind the glass beaker.

One fairy called out,

If this cup should break or fall,
Farewell, the Luck of Edenhall!

Simpson suggests that if the Luck of Edenhall was actually a Catholic chalice, the fairy legend gave its owners a good excuse to hang onto it, despite the political risks of doing so (2003: 106).

We might more often associate crystal gazing with crystal balls. Ideally, these would be made of rock crystal, which is a form of clear quartz.

Yet some balls might be glass, which is cheaper. Indeed, one turn-of-the-20th-century method of crystal gazing involved using an egg-shaped ball of pure glass. It was best to do your crystal gazing between 11 pm and midnight in a dark room. You would hold it in your right palm and concentrate on whatever you wanted to see in the glass.

By midnight, the crystal would become warm. If you looked into it, you’d see whatever was happening with your friends far away. Some believed you could keep tabs on partners or friends (2 Daniels 2003 [1903]: 727).

Dr John Dee used a slice of obsidian in his efforts to talk to angels.

Obsidian is a form of volcanic glass, made from cooling lava. Yes, I know, it is technically an igneous rock. At the same time, it’s not crystalline like a mineral. It can be used as a blade, since its cutting edge is sharper than steel surgical scalpels. That said, they are more brittle than their metal counterparts.

The phenomenon of the charm wand also appears in the folklore of glass. These pretty glass items sometimes take the shape of rolling pins or walking sticks. The glass might have a multi-coloured twist inside (like a marble). Sometimes, people filled them with coloured items, like threads or beads. People used these wands for protection against the evil eye. If you wiped yours down every day, it could protect against sickness (2003: 57).

Daniel Harms discusses them on his blog, having found one in the Wayside Museum in Cornwall (2014a). This one takes the form of a walking stick, made of glass and hung over the fireplace. The idea was that anything that came down the chimney would end up so transfixed by counting the bubbles in the glass that they wouldn’t enter the home. The homeowner would wipe them off in the morning and then burn the rag. George Soane describes them as a peculiar superstition from Devon, specifically used to draw disease away from the occupants of a house (1849: 206).

In a second post on charm wands, Harms notes that the breaking of a charm wand was a bad omen. Misfortune or illness would surely follow (2014b). Given the link between the wand and its magnetic powers for infections, that’s hardly surprising. That said, it’s more likely that people originally used these items as decorative ornaments. They only gained their magical associations later.

While researching this piece, I found a Scottish version of the Cinderella story. In this one, the wicked stepmother mistreats the nameless heroine by withholding food, but magical animals such as a black lamb help her by providing food or doing the stepmother’s impossible tasks. Eventually, the lamb tells her to go to church, but she has to leave before the end of the service.

She puts on her best dress and glass slippers and heads to church. As instructed, she leaves before everyone else. The Prince spots her in the church, but he can’t find out where she lives. The following week, he sees her again, but this time, she accidentally leaves behind a slipper in her haste to leave.

The Prince then starts his shoe-fitting competition to find his bride, because we all know that marrying someone you’ve never even spoken to is a recipe for success.

He reaches the girl’s house, and one of her stepsisters insists the slipper is hers. She has to cut off her toes and part of her heel to get the slipper to fit. Although she clearly looks nothing like our heroine (and the story stresses how struck the Prince is by her beauty), the Prince takes her away to his castle.

They pass some talking ravens, who point out the Prince’s mistake. He finally notices all the blood on his would-be bride’s foot, and eventually realises it’s not the right woman. He takes her home and finds our heroine hiding where the ravens said she would be. She shows him the other slipper she already owns, the Prince finally recognises her, and they leave, ready to live happily ever after.

What do we make of it?

The church attendance only appears in the Scottish version and replaces the ball found in other versions. Karl Blind suggests the talking ravens represent Hugin and Munin, Odin’s wise birds (1889: 28). Yet the tale preserves the deeply impractical (and dare I say it rather unwise) glass slippers.

Blind notes this material is essential to the story because the shoe cannot yield to the wrong foot (1889: 30). Satin or leather might stretch. Glass clearly can’t. Given the slippers fit our heroine perfectly, they’re custom-made for her, and stand in for her.

Blind also discusses whether the slippers might have been gold. But in some ways, if they’re made from glass, that offers something different to the story. It makes them more fragile and infers these slippers are to be admired, not walked in. The shoes show the father’s wealth, and since the slippers stand in for our heroine, they show that she too is ultimately wealthy.

What do we make of the folklore of glass?

I think we can see that the link between ‘breaking’ and ‘death omen’ is straightforward. You can’t put the glass back together again, so it’s ‘died’.

Meanwhile, dropping a glass and not breaking it is unexpected. This would explain why such an action appears as lucky.

It’s also important to remember glass wouldn’t have been available to everyone at the same time. Glass was a sign of status and wealth. This is similar to the reason why you don’t want to break a mirror. It takes time to save up to replace it, which is where the bad luck comes from.

Sure, glasses might be cheaper now. But do you want to risk it?

What do you think of the idea of glass shoes? Let me know below!

1 Daniels, Cora Linn (2003 [1903]), Encyclopædia of Superstitions, Folklore, and the Occult Sciences of the World, Volume I, Honolulu: University of Hawaii Press.

Harms, Daniel (2014a), ‘Charm Sticks and Charm Wands: A Little-Noted Item of Folklore’, Papers Falling From An Attic Window, https://danharms.wordpress.com/2014/06/04/charm-sticks-and-charm-wands-a-little-noted-item-of-folklore/. 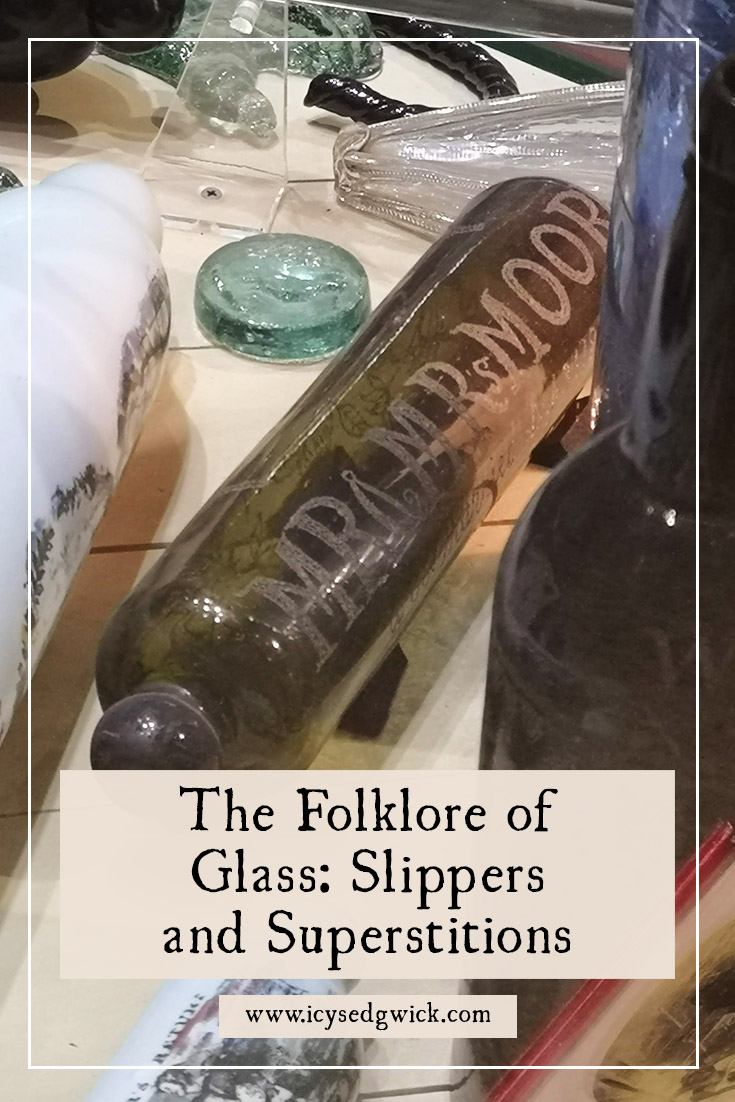