Different metals are often baked into mythology. Look at griffins and dragons with their hoard of gold. Or Bellerophon’s use of molten lead to kill the deadly chimera. According to legend, people paid for their passage to the underworld with coins placed over their eyes.

But how do different metals turn up in folklore? Why is iron such a protective metal, while silver has a whole range of uses? How has copper become so useful to modern medicine? We’ll look at the ways ordinary people used gold, silver, iron and copper through superstitions and folklore.

We won’t be covering alchemy, since I’ve covered that before here. But if you’re curious about the folklore of metals, keep reading! Or hit ‘play’ to hear the podcast episode of this post.

Gold: Always Believe in your Soul

Gold is often associated with the Sun. It’s also the material of choice for the 50th wedding anniversary (Webster 2008: 281).

Shipwrights could affect the luck of the vessel during the building process. They built a gold coin into the framework and a silver coin under the mast (Reader’s Digest 1973: 72). There was also a belief that a sailor couldn’t drown if he wore a gold earring (Webster 2008: 118).

Rubbing your eyelids with gold was supposed to bring good luck. Others thought rubbing a sore eye with a gold ring would cure the problem (Webster 2008: 118). I wonder if applying gold eyeshadow has the same effect, or if it needs to be the metal itself?

There’s also a gold-related legend that explains why we hang stockings at the hearth. St. Nicholas learned that three beautiful sisters were so poor they were forced to turn to sex work since no man would marry them. He threw three pieces of gold through the smoke hole in their roof. They landed in their stockings, drying before the fire (Webster 2008: 57).

Doctors once carried gold-headed canes, which were supposed to guard them against infection (Daniels 2003 [1903]: 371).

And if you’re interested in fairy gold, it appears in my article about money folklore!

Silver is the metal associated with the Moon. It’s also the material of choice for the 25th wedding anniversary (Webster 2008: 281).

It’s perhaps most associated with the best method to dispatch werewolves. But you don’t always need to shoot a werewolf. Apparently, if you know the werewolf’s human name, you simply call it three times while they’re in the wolf form. Make sure you get it right, otherwise, you can find yourself turned into a wolf (Webster 2008: 284)

Silver was also believed to be lucky. Alex Spencer notes that in Scotland, the bride might have a silver horseshoe sewn into her wedding dress. In some places, it was customary for the flower girl to give the bride a silver-coloured horseshoe as she left the church (2017).

One of the common ways that people used silver is through coins. An easy way to provide a good luck wedding day memento is to push a silver coin into a champagne cork. A bride might put a silver coin in her shoe for luck.

Elsewhere, silver coins become either lucky, protective, or curative. In Britain, we have the custom of giving a new baby a silver coin. One reason is to bring prosperity in the future (McDowall 2013: 255). I’ve also heard others do so since the coin apparently keeps the Devil away.

In the Ozarks, people turned silver coins into rings. They believed it was good luck to touch a silver coin when the new moon appeared (Randolph 1933: 3).

The Tooth Fairy left silver coins for children in exchange for their baby teeth.

Rings made from silver coins also had a healing aspect. People would beg a penny from twelve unmarried people of the opposite sex. They would exchange this money for ‘sacrament money’—i.e., silver coins left in the church collection. Silversmiths turned these coins into a ring that could apparently cure fits (Simpson 2003: 327).

Cramp rings could also be made from metal stolen from old graves. People preferred silver, but they might use any metal used to make coffins (Webster 2008: 69).

In the Ozarks, people also used silver coins to ease teething pains. They hung them on strings around their childrens’ necks (Randolph 1933: 3).

If you thought a person or cattle had been affected by the Evil Eye, then silver could help you detect if they had. You should,

“Draw water between sunset and sunrise from a stream crossing a public road which has been passed over by the living and the dead. Put a piece of silver in the water and pour it over the person or animal you desire to cure in the name of the Trinity. If the sickness has been caused by the Evil Eye the silver will stick to the bottom of the vessel.”

There’s a possibility that silver is specified due to the metal’s perceived properties. Look at silver defeating werewolves and witches. In Georgia, silver could even be used to dispatch ghosts. A superstition from 1894 recommended turning silver quarter-dollars into bullets. Shooting a ghost with one would apparently kill it (Moore 1894: 305). That said, silver still wasn’t as effective as iron for dispatching supernatural threats.

If a woman wanted to find a compliant husband, she needed to find old iron nails and have them turned into a ring on a Friday during mass. She would need to say the gospels on it every day, and say a paternoster. Once she wore it on her finger, she’d find a husband who would do anything she asked for a year (Daniels 2003 [1903]: 91).

Yet it’s perhaps more famous as the anti-fairy metal of choice in folklore. Parents might hang an open pair of iron scissors over a cot to deter faerie theft. Or they might stick an iron pin into the baby’s clothes. People in Northumberland placed garlic, bread and steel in the cradle to stop fairies from stealing their babies (Henderson 1879: 14). Steel is another form of iron. Incidentally, garlic is also a plant associated with Mars!

Some people in Scotland also put a piece of cold iron into the bed before a woman gave birth. Not only did it keep the fairies away, it also ensured a safe and easy birth (Daniels 2003 [1903]: 40).

The metal didn’t just ward off fairies. People also wore iron bracelets in bed to protect themselves from visits by succubi or incubi (McKendry 2016).

Any implements made of iron provided protection to the home, but especially the sickle. This protected a house from being struck by lightning. Store it by the chimney, tip upwards (Webster 2008: 236). If your house had an iron fence, you’d enjoy good luck for as long as the fence remained standing (Daniels 2003 [1903]: 439).

And if you’re interested in the ways people have protected their homes, sign up at the bottom of the post to get my free ebook about it!

In the Ozarks, if people found horseshoes when they were out and about, they would spit on it and throw it over their left shoulder to bring good fortune (Randolph 1933: 20). Alternatively, they could hang it in a tree to contain all their bad luck. If anyone came along and touched the horeshoe, they’d get all the bad luck of whoever hung it up (Randolph 1933: 20).

They also used iron nails to ward off evil. They would drive three nails in the shape of a triangle into the door. This would apparently keep away witches (Randolph 1933: 20). Likewise, putting a new horseshoe in the bottom of a butter churn stopped it from being bewitched (Randolph 1933: 21).

Iron also had other protective qualities. You could make sure your dress wore well by keeping a piece of iron in the pocket (Daniels 2003 [1903]: 428). Meanwhile, putting a cold iron bar over beer barrels would stop the beer from turning sour during a thunderstorm (Daniels 2003 [1903]: 542).

Copper is the metal assigned to Venus. Copper, or bronze, marks the 7th wedding anniversary, and copper alone is the 22nd-anniversary material (Webster 2008: 280).

In the Ozarks, people wore copper rings or carried copper beside the skin to treat rheumatism (Randolph 1933: 3). Copper wire around the ankles was particularly popular, which led locals to cut off lengths of telegraph wire. Even now, people might wear either magnetic or copper bracelets to ease the pain of arthritis. Unfortunately, research has shown that if they do work, it’s purely due to the placebo effect (Richmond 2013).

Incidentally, copper is an amazing metal if you want an antibacterial surface. The ancients knew about this, with the Egyptians using copper to sterilise wounds and drinking water. Medical settings have finally taken an interest in it (Grass 2011: 1541).

This use of copper to get rid of things might explain our next superstition. You could get rid of pests in the house by beating copper pans in every room on the last day of February. You’d shout “Out with you, scorpions, serpents, fleas, bugs and flies!” as you did so. Then you would carry a pan outside, holding it with a pair of tongs, and all the pests would go into it (Daniels 2003 [1903]: 463).

Copper also has the power to change colour, which is why many buildings now have green cupolas or roof features. The metal turns a greenish-blue when it oxidises. At one point, people thought that using copper needles to pierce cheese created the blue veins in blue vein cheese. It was only when people started using stainless steel needles that they realised it wasn’t because of the copper (Webster 2008: 55).

What do we make of the folklore of metals?

We’ve only been able to cover four metals here. Other metals, such as tin or lead, have their own folklore too. But metals in general are, much like plants, both beneficial and toxic to humans. Quicksilver, or mercury, is highly toxic, while the body needs copper to make red blood cells, maintain your immune system, and form collagen.

There’s also a degree of human activity imprinted upon metal. Most metal we encounter has been processed beyond the ore originally found in the ground. This gives humanity a closer relationship with metal as we’ve learned to work and shape it. No wonder blacksmiths were once revered so much!

Let me know what you think of the folklore of metals!

Daniels, Cora Linn and C. M. Stevans (2003 [1903]), Encyclopaedia of Superstitions, Folklore, and the Occult Sciences of the World, Vol. I, Honolulu, HI: University Press of the Pacific. 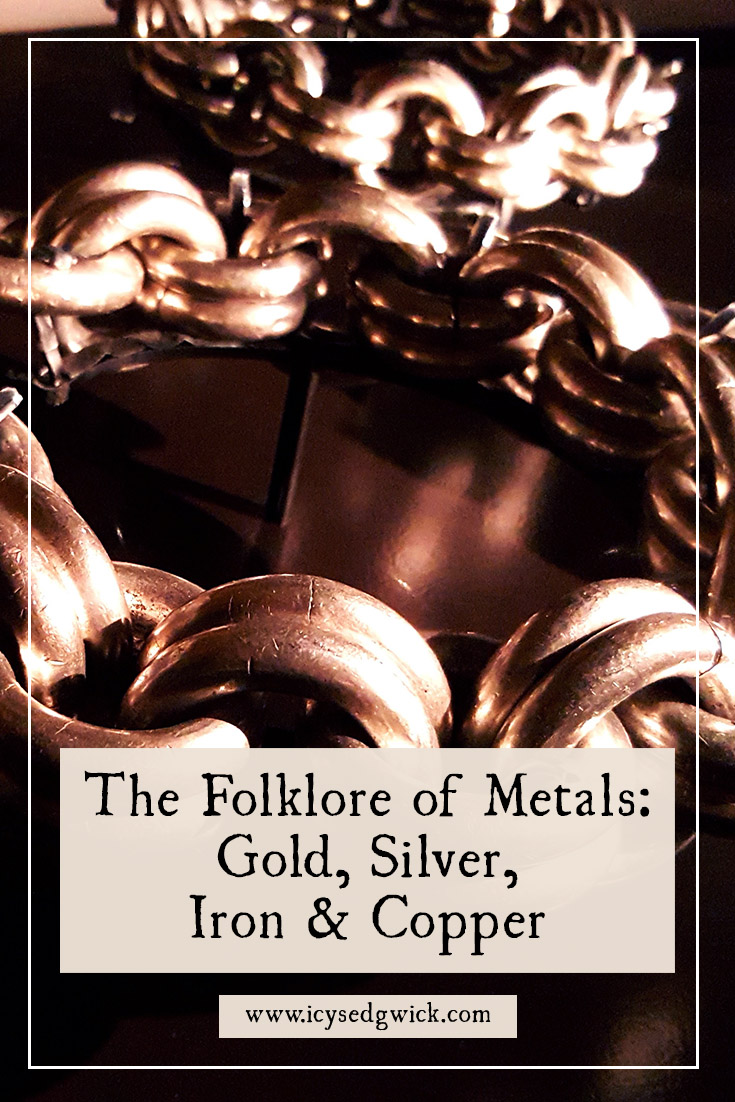