Love, health, and money are perhaps three of the most common topics for divination and magic. Despite the fact that practising magic to find treasure or money was a crime under England’s 1542 Witchcraft Act (McDowall 2013: 254). But it’s not surprising that money folklore would focus on how to use money for luck—or to attract more of it. 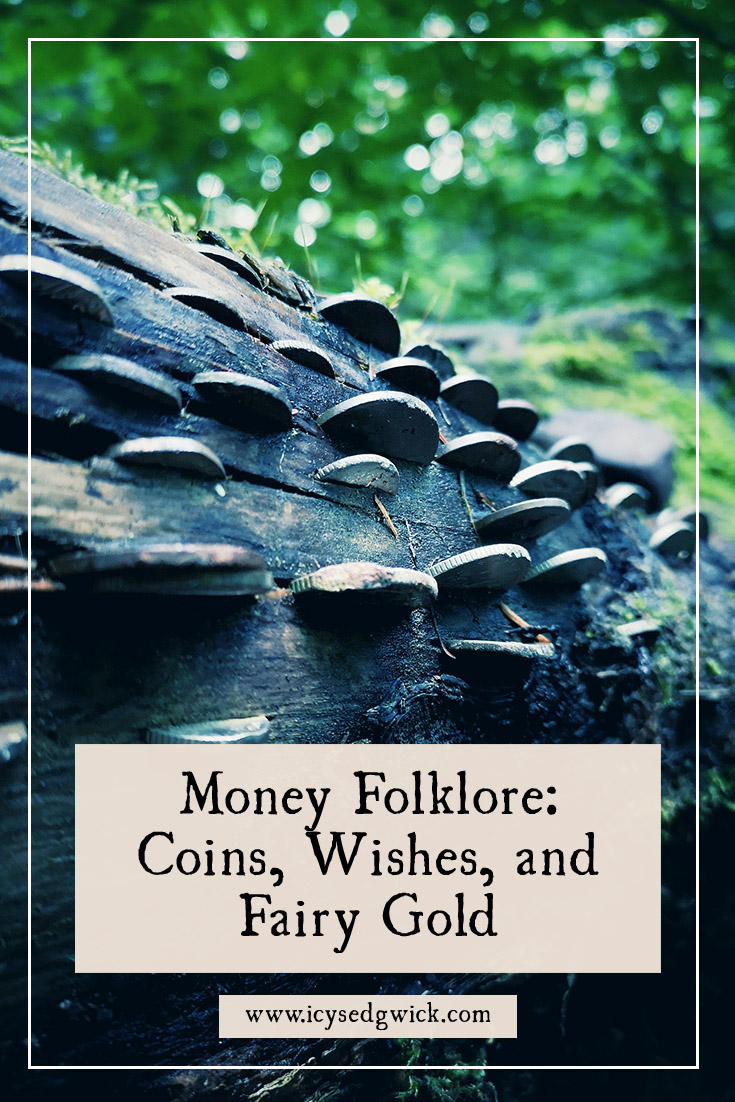 As Robert McDowall points out, money itself is now a bit of a magical, mythical thing nowadays. Most money is created invisibly, and we only see it in banknotes and coins. Yet they represent a higher value than they’re actually worth (2013: 260). What’s that, if not mystical?

Money certainly makes its way into plenty of mythology and folklore. We’ve got the coins used to apparently pay Charon, the Ferryman, to take the dead across the Styx to the underworld.

So how else does money show up in folklore and superstition? Let’s find out! Hit ‘play’ to listen to the podcast episode of this post, or keep reading!

Jacqueline Simpson and Steve Roud talk about the custom of throwing coins into water and making a wish (2003: 393). The first record in the Oxford dictionary for the term ‘wishing well’ comes from 1792, but they think the practice relates to people centuries ago making offerings at holy or healing wells. There is even a legend of Romans in Gloucestershire throwing silver coins into the water whenever they crossed it. The Romans made a lot of offerings to water deities, including the altars to Neptune and Oceanus that they left in the River Tyne.

It’s certainly preferable to the folklore phenomenon of the coin tree. In this tradition, people push coins into the bark of trees or tree stumps. It’s generally done to ‘make a wish’, so there’s no explicit link between the coin and wealth—unless that’s what someone wishes for. Some believe they offer healing powers, so shoving the coin into the wood will transfer any illnesses to the tree.

Trouble is, the metal leeches into the tree bark and slowly poisons the tree (Meier 2014). So avoid joining in the practise unless it’s done to an already fallen tree.

Thankfully, most coins in money folklore are lucky without needing to kill trees. Bent coins, or coins with holes in them, are most often associated with luck. Simpson and Roud remind us of the ‘crooked sixpence’ of the nursery rhyme. In the medieval era, coins were bent to confirm a vow, or a cure, or to bring good luck. It was also important to offer the coin to a saint while bending it (2003: 75).

Elsewhere, silver coins become either lucky, protective, or curative. In Britain, we have the old custom of giving a new baby a silver coin. The reasons for this differ slightly. McDowall notes it’s to bring prosperity in the future (2013: 255). I’ve also heard others do so since the coin is believed to keep the Devil away.

The Tooth Fairy left silver coins for children in exchange for their baby teeth. A bride might put one in her shoe for luck.

An even stranger choice was the belief in rings made from silver coins. Simpson and Roud explain the fact that people would beg a penny from twelve unmarried people of the opposite sex. They would then exchange this money for ‘sacrament money’—i.e., silver coins left in the church collection. This was turned into a ring that could apparently cure fits (2003: 327).

There’s a possibility that silver is specified due to the metal’s perceived properties. Look at silver defeating werewolves and witches. That said, silver still wasn’t as effective as iron for dispatching supernatural threats.

For all its uses in financial transactions, money also appears in folklore as a way to seal a bargain. The so-called ‘God’s penny’ was one way to seal a bargain between traders. Think of it as a binding deposit from the buyer. According to Simpson, “[t]he name possibly derives from an earlier belief that this sum should be given to the Church as a voluntary donation” (2003: 147).

There was also the concept of ‘earnest money’, which was money given to new servants and farm workers when they were hired. Accepting the payment meant they had to turn up on the agreed date for work (Simpson 2003: 147). The payment became a handy way to make sure new hires did actually show up.

Then there’s the King’s Shilling, which was money given to men to encourage them to enlist in the army (Simpson 2003: 147). The acceptance of the King’s Shilling wasn’t always a conscious one. According to Forces.net, people would slip a shilling into a drinker’s pint at the pub (2015). After drinking it, the drinker would discover they’d accidentally accepted the summons to the army. This led to the creation of glass-bottomed tankards so drinkers could be sure no shillings lay at the bottom for them.

Finally, we have ‘luck money’. This was money given to the buyer by the seller when a deal completed successfully. Apparently, this was to bring them luck. Some also believed you needed to spit on the money to make it lucky, but it doesn’t say who was doing the spitting—the buyer or the seller! (Simpson 2003: 147)

We’ve already briefly touched on the Tooth Fairy and her bizarre money exchanges for baby teeth. This clearly wasn’t a reliable—or sustainable—form of income. It became necessary to come up with ways to otherwise attract money, or predict prosperity. You’ve probably heard of the idea that an itchy right palm means you’ll receive money. An itchy left palm means you’ll spend money.

But how about this one? If ants build their nest beside your door, it means your future is financially secure (McDowall 2013: 256). A bee landing on your hand means money is on the way. In the Bahamas, the black witch moth is locally known as the money moth or moneybat. According to one legend, you’ll come into money if they land on you. Similarly, in South Texas, if a black witch moth lands above your door and stays there for a while you will supposedly win the lottery (Quinn 2008).

Incidentally, if you do see money in the street, there are competing strands about what you should do with it. Naturally, you’ve probably heard the rhyme, “Find a penny, pick it up. All day long you’ll have good luck.” With this in mind, you’d probably pick up the penny for luck.

Yet as Emily DiNuzzo explains, some people think you should only pick up the coin if it lies heads up (2019). Flip over any tails-up coins so its next finder can have the luck instead.

And it seems only fitting to end this discussion of money folklore with the idea of fairy gold. There are two definitions of fairy gold. On one hand, it refers to money given by the fairies, which is discovered to be unusable. In these legends, it sometimes turns into leaves. On the other hand, it refers to money that is spent as soon as it’s acquired.

As W.H.D. Rouse points out, this folkloric belief even existed in ancient Greece. A Greek proverb says “our treasure turned out to be charcoal”, though there’s no way to know if this simply illustrates the concept or a belief in supernatural wealth (1897: 379).

In a letter to Folklore, John Brunner offers an explanation for these legends. A friend of his had discovered an ancient ammonite fossil with a golden sheen. According to their amateur palaeontologist, it was found set hard within its stratum. By comparison, other fossils can look like that when first discovered. But because they haven’t been ‘set’ in the same way, they disintegrate. This would give the appearance of buried treasure turning to mud (1979: 241).

Do you believe any of this money folklore?

Hopefully, you can see the direction most money folklore runs in. People have used coins to bring good luck, bind deals, and offer protection. Perhaps coins are so prevalent since they’re portable and easily passed between people.

Insects become associated with the approach of money, with bees, moths, and ants all central to a range of superstitions. Perhaps their flighty nature, as they come and go as they please, reflects many people’s experience of money.

Though it’s the fairy gold that always fascinates me. Some fairy stories do indeed see humans compensated with ‘real’ fairy gold. But in others, they soon learn that all that glitters is not gold. Who knows? Maybe the idea really did come from ancient fossils!