Mention ‘ladybird’ to most British people of a certain age and they’ll think of the well-loved Ladybird series of small, hard-backed books. 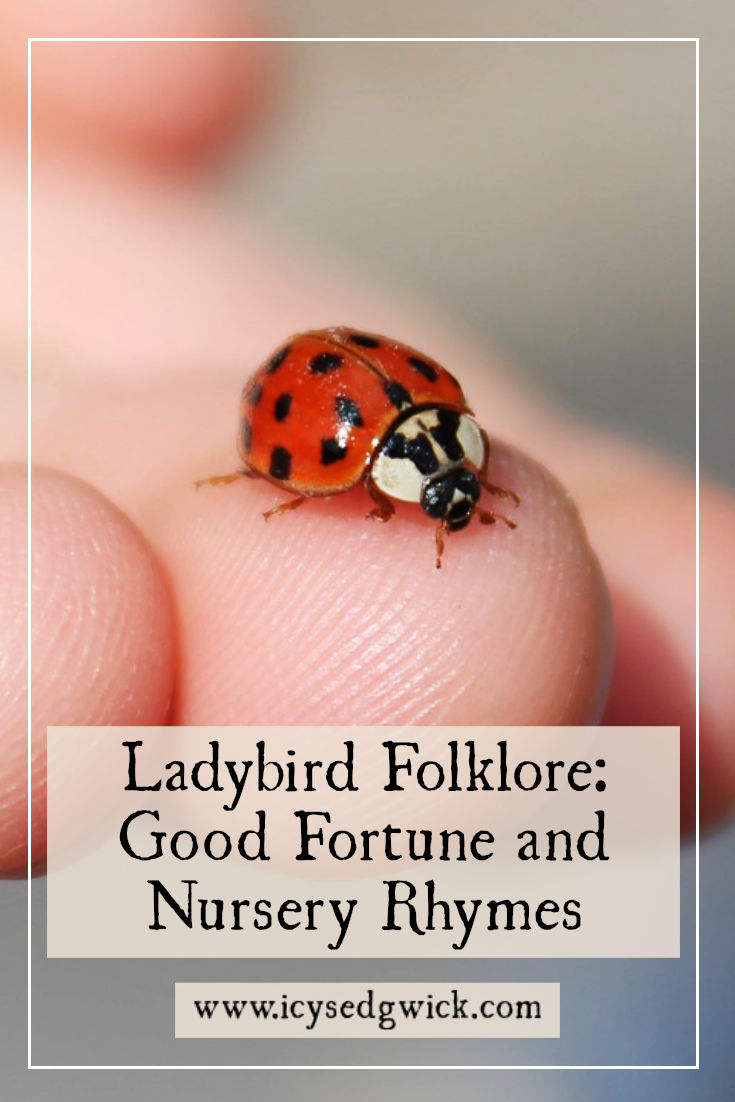 I’ve even read one of the newer series aimed at mature readers, the so-called ‘Ladybird Expert’ series. Suzannah’s Lipscomb’s volume on Witchcraft is a highly recommended read! (Affiliate link)

But anyway. We’re talking about ladybirds this week! There are almost 5000 known species worldwide. They’re also known as the ‘ladybug’ in the United States, but I’m in the UK so we’ll stick to ‘ladybird’.

As always, hit play below to listen to the podcast episode on ladybird folklore. Or keep reading!

Where did the ladybird get its name?

There are a few stories about the origin of the name ‘ladybird’ but we’ll stick to the main one. During the Middle Ages, swarms of insects kept destroying crops in Europe. After praying to the Virgin Mary for help, hordes of ladybirds turned up. They demolished the insect invaders, thus saving the harvest.

The legend explains that the farmers renamed the newcomers “The Beetles of Our Lady”, which eventually became ‘Lady Beetles’, and then ‘Ladybirds’.

We’re more used to seeing Mary in blue now. Mainly because blue comes from lapis lazuli, and early painters decided to keep their most expensive pigment for the mother of God.

This link between the ladybird and protection or safety helps explain why so many baby clothes have ladybirds on them.

But this behaviour was tested in the 1880s in California. Citrus growers kept losing swathes of their citrus groves to a destructive insect imported from Australia. So they released $1,500 worth of Australian ladybirds to try and bring the problem under control. Within two years, they’d beaten back the pest and said the groves.

Interestingly, I mentioned in my Fabulous Folklore podcast episode about dragonflies that I’d doing ladybirds next. And one of my Twitter friends dropped me this extra nugget. Fab, eh?

You’ve probably come across this, but in Korea, ladybugs are called “mudang beollae,” which means ‘shaman beetle.” The origin is unclear, but some believe there is an association with the red color worn by shamans.

Ladybirds represent good luck. It’s incredibly unlucky to kill one. Some beliefs even say you end up in the Virgin Mary’s bad book for nine days if you kill one.

When a ladybird lands on you

If one lands on your hand, it means you’ll get new gloves. You should also try to make a wish as it sits in your hand. Pay attention to which direction it flies away in – that’s the direction your new luck will come from.

In Belgium, a girl would be married within the year if a ladybird crawled on her hand. Those in Sussex believed that if a ladybird landed on them, they’d “have as many happy months as the spots on its back” (Dillon 2001: 255). The more ‘red’ the ladybird is, the better the luck.

Girls even had a rhyme to recite if they caught a ladybird. They’d hold it, saying,

Fly away east or fly away west,
And show me where lives the one I like best.

Then they’d let it go and see where it went. It helped them discover where their future husband lived.

If one lands on your head, you’ll get a new hat. In France, people believed you’d be cured of any ailment if a ladybird landed on you. The insect would take it with you when it flew away.

Speaking of ailments, one strange belief concerned ladybirds and toothache. Dentists mashed up the insects and put them into a cavity. The disgusting taste helped distract you from the pain if nothing else! Some also thought you could cure both colic and measles with ladybirds.

If you can, count the spots on a ladybird. More than seven mean famine is coming. Less than seven means the harvest will be good. Others think that counting the spots relates to how many coins you’ll find – but only if you find the ladybird in your house.

Ladybirds are known as “commaruccia”, or “little midwives” in Italians. For newly-weds, the spots predicted the number of children they’d have.

Many beliefs revolve around ladybirds and the weather. In Northumberland, children would throw ladybirds they found into the air, saying,

Reed, red dodger, fly away,
And make the morn a sunny day.

Many people used to explain the arrival of babies to children by saying they were delivered by a stork, or found under a bush. In Switzerland, they said ladybirds brought babies to families.

And ladybirds get by far the most ‘heavy metal’ origin story in one Norse legend. Apparently the ladybird rode a bolt of lightning to reach earth.

Which is better than the Norwegian belief that if a man and a woman spot the same ladybird at the same time, romance will blossom.

While butterflies often represent transformation, ladybirds often symbolise regeneration because their life cycle is only around a month long.

Some people also link the ladybird with the scarab, sacred to the ancient Egyptians. While this might sound odd to us, ladybirds belong to the same group of beetles as scarabs. Which I think makes them quite sacred too.

You may have come across the following nursery rhyme, or a variation of it.

Ladybird, Ladybird, fly away home….your house is on fire, and your children will burn.
Except little Nan, who sits in a pan, weaving gold laces as fast as she can!

It was a common practice in Medieval England to set fire to hop vines after the harvest. It was a quick way to clear a field, ready to be planted with the next crop.

The nursery rhyme referred to those ladybirds still on the vines looking for insects. The ‘children’ refer to the larvae, while Nan is the pupae, attached to the vines. While the ladybirds and larvae could escape, the pupae would burn with the vines.

That’s one interpretation. Richard Webster relates another, that the rhyme “was originally a charm to help the sun pass through the dangers of sunset. The house on fire symbolised the red evening sky” (2008: 150). I’m not sure how much I believe that one. It seems a bit too ‘seasonal’.

Either way, ladybirds have gone on to become beloved garden critters. Where people fear spiders, or actively chase away wasps, many love ladybirds. And who can blame them? They’re quite cute the way they trundle about, and they’re an organic form of pest control. Hooray!

Do you know any other superstitions about ladybirds? Let me know below!