Tales of dragons, known as worms, abound in English folklore. Last week, we looked at the Lambton Worm in County Durham. This week, we’ll head north up the coast to Northumberland to meet the Laidly Worm.

The story concerns Spindlestone Heugh, near the mighty fortress of Bamburgh Castle. 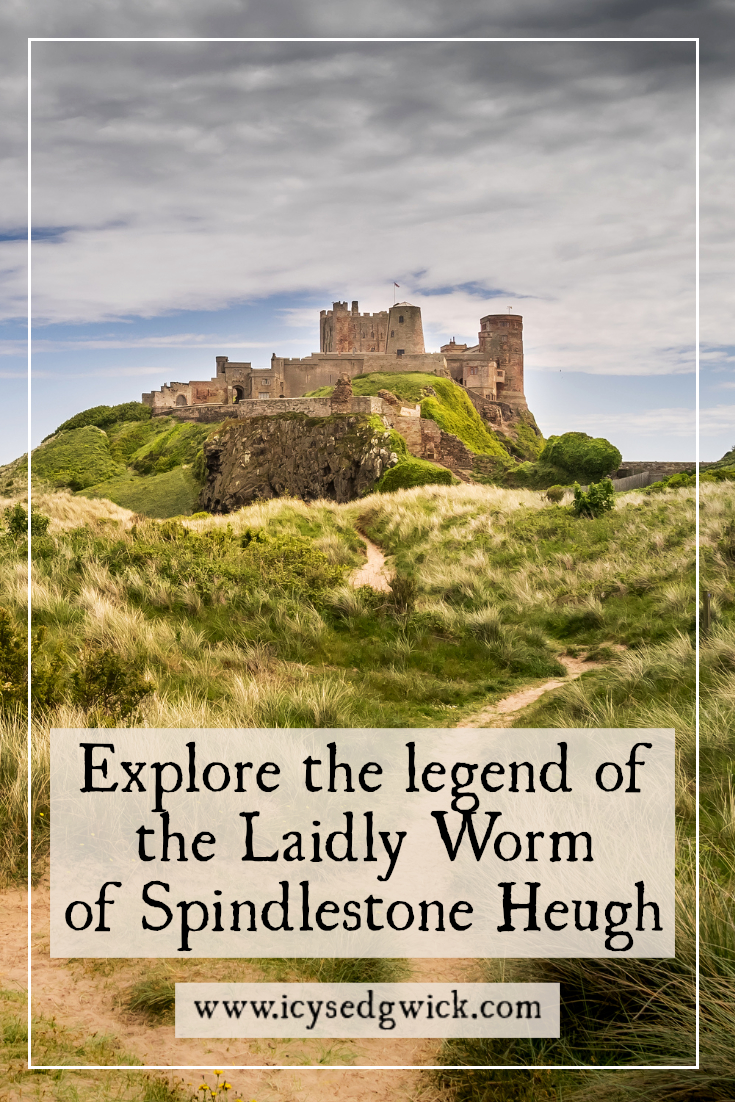 The tale concerns the beautiful Princess Margaret, left alone in the mighty fortress. Bereft of her late mother, her brother sought fame and fortune in distant lands. Her father travelled the country searching for a new bride. At length, he sent word of his return, with a second wife in tow.

Though other stories claim her father met the bride while out hunting.

The local population turned out to welcome the new queen at a lavish feast. Unfortunately for Margaret, the queen was actually a witch, immediately jealous of Margaret’s beauty and popularity. She cursed her to turn into a ‘laidly worm’, a spell which could only be broken by the return of her brother.

Margaret publicly dismissed the threat and retired to bed. Sleep did not come easily as she turned the curse over in her mind, but eventually, she dozed off.

In the morning, none of the servants could find Margaret. Her room housed a mighty dragon, instead of the princess. The worm fled the castle and took refuge in nearby caves. An old ballad told that she was so venomous that no grass or corn could grow in a seven-mile radius.

The local population didn’t know what to do to save their livestock from the beast. They consulted a warlock, who advised them to leave the milk of seven cows in a stone trough. This daily gift placated the dragon and it stopped bothering their animals.

While the cave and the trough were destroyed to make way for a quarry, this is believed to be the area in which they were once found.

News of the worm spread far and wide. Eventually, the story reached Margaret’s brother. Known as ‘the Childe of the Wynde’, the prince was furious to hear about her treatment at the hands of his new stepmother.

He immediately set sail for Bamburgh. Childe Wynde knew all about witches and commissioned a ship made of rowan to repel her evil magic.

His ship approached the coast. In some versions of the story, the Queen called up a fearsome storm. In others, the Laidly Worm lashed its tail and whipped the sea into a frenzy. Either way, Childe Wynde changed course and landed at Budle Bay instead.

He ran up the beach and the Laidly Worm reared up behind the cliffs. Childe Wynde paused, afraid of the mighty dragon, but he wanted to save his sister.

The prince raised his sword. His sister’s voice rang out, telling him to put away his blade and give the dragon three kisses.

The siblings set off for Bamburgh Castle, eager to bring the Queen to justice. She realised Childe Wynde wouldn’t back down and begged for mercy. Some of the stories say Margaret was happy to oblige, but her brother couldn’t forgive the Queen’s behaviour.

He condemned her to the fate she’d meted out to his sister. The Queen vanished in a puff of smoke, leaving behind a large, venomous toad. The servants chased the beast out of the castle and it hid at the bottom of the castle well.

In another version of the story, Childe Wynde touched the Queen with rowan. She shrivelled up, became a toad and fled. Local legends tell of a foul toad haunting the area.

Is there any truth in the story?

The story is also similar to the ballad of ‘Kempe Owyne’. A Welsh hero must save a maiden transformed into a monster by her stepmother. Kemp Owyne must kiss her three times to break the enchantment.

A 14th-century tale concerns the island of Cos, where a physician’s daughter is turned into a dragon. Only the kiss of a knight can break the spell.

Stepmothers don’t fare well in these stories. The spells take the form of transformations into hideous creatures. Kisses overturn the curses. The Laidly Worm story is unusual in that the saviour is the princess’s brother. But other elements remain the same.

Such common story themes are difficult to place, especially when they crop up in different places and eras. As with the Lambton Worm story, perhaps it dates to a time of difficulty in the area. The arrival of a newcomer from elsewhere coinciding with calamity might prompt stories of witchcraft.

The King in the story is never named. Some historians believe he may have been Ida the Flamethrower, the first ‘English’ king. He ruled from 547 to 560 AD. Scholars theorise that the Saxon tales from the time either grew to incorporate the dragon or copied the Kempe Owyne story.

The Reverend Robert Lambert of Norham claimed he’d found the story in a 13th-century poem, but no records of such a ballad survive. Perhaps the Reverend wrote it himself in a fit of creativity.

Either way, it’s a fitting fairytale to suit such a forbidding fortress.

Do you know any ‘big worm’ or dragon stories? Let me know below!