Moving house is often cited as being one of the most stressful things you can do. After all, it’s a huge process, from actually viewing houses through to packing your stuff and moving it to a new home. 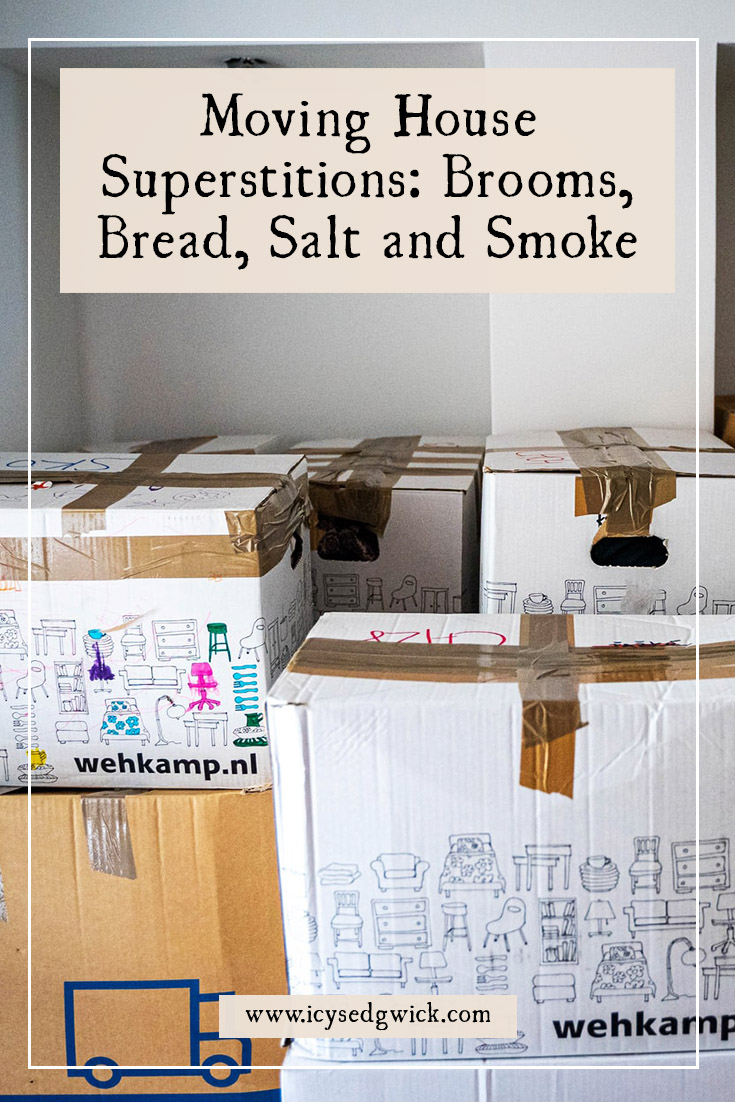 It’s unsurprising that such a noteworthy life stage would have a host of moving house superstitions and traditions attached. Many cultures have different approaches, though here, I’ve stuck to those from the British Isles since I could actually verify them.

I did so by asking the question on Twitter,

So my lovelies! Did any of you follow any traditions or superstitions when you moved house?

Even those responses from respondents outside of the British Isles confirmed how widespread some of these traditions are. You’ll find some of the answers among those superstitions and traditions found in secondary sources! I did remove those that were closer to apotropaic measures than rites related specifically to moving into a new home.

So let’s take a look at ‘moving house’ folklore. Keep reading, or hit play to hear the podcast episode of this post!

Some consider Thursday the best day to move house. Sunday is also a good choice (Carroll 1998: 290). Friday and Saturday are considered the least lucky. There’s even a rhyme to explain the lack of luck in choosing a Saturday: “A Saturday flit means a short sit”.

Some think rain on moving day is supposed to bring luck, while others think it’s bad luck to move house when it rains. One superstition even advises moving house during a waxing moon (Diagram Group 1999: 336). When you move in, open the shutter facing east first to guard against storms (Daniels 2003 [1903]: 477).

There was an Irish tradition that you left your house through the door you entered on your first day in the property. Failure to do so brought bad luck. You can always count the corners of each room on the first day you move in to bring good luck (Carroll 1998: 290). Over on Twitter, people put up horseshoes above the door used most often.

While some think coal brings warmth and salt represents ‘life’s flavour’, Cora Linn Daniels says you throw it into the house before you walk in to drive out evil spirits (2003 [1903]: 477).

Elsewhere, people scatter salt in each room to deter evil spirits. That said, one respondent on Twitter said they used to hear indistinct chatter downstairs during the night, which always seemed quite joyous. An in-law unfortunately scattered salt in the house and now no one has heard the chatter since.

Leave the old broom in your old house and buy a new one for your new home. Some say this is because brooms get attached to houses, others say you don’t want to take old dirt (both literal and figurative) into a new house. (Apparently, this only applies to brooms used for cleaning. Those used for magical purposes are quite happy to move house). When I asked about moving home superstitions and traditions on Twitter, one respondent actually did this, and tossed the new broom into the house first!

As well as leaving the broom behind, Cora Linn Daniels advises burning any dishcloths or cleaning cloths (2003 [1903]: 477). That way, you won’t carry bad luck with you from one house to the next.

A related superstition directs you to burn your old broom in the corner. You shouldn’t move it with your household furniture or it will only bring a lack of success (Mills 1952: 43). William Carroll advises you to throw a broom over the house before you go inside to bring good luck (1998: 290).

You shouldn’t take your cat with you, because she would only bring bad luck. If you leave her behind for the next owners, she will bring them good luck instead. Randall V. Mills guesses this is because the cat knows the mice holes in the old house, whereas the new house is a mystery (1952: 45). All I can say is don’t do this—take your pet with you.

Cora Linn Daniels even advises that you should throw something alive into a new house since the first to enter is the first to die (2003 [1903]: 477). She suggests an animal, but I would say this is a tradition we can probably safely ignore.

Gifts for the New House

For William Carroll, you should carry food into the house first so you always have food (1998: 290). He also says your first visitor should bring cake so life in the house will be sweet.

Another superstition disagrees, saying you should carry a Bible into your new house as the first item (Diagram Group 1999: 336). One Twitter respondent said, “A Catholic priest came to ours and did a house blessing”.

It’s also a good idea to bring gifts for the house spirits in your new home. Some sources recommend common items like bread, honey, cream, salt, or wine. Others recommend you also light candles, while one respondent noted using sage to cleanse the house from top to bottom.

Althaea Sebastiani makes the argument that it’s actually rude to do a smoke cleanse in a new house. After all, the house spirits were there first, and cleansing to get rid of them could be counter-productive! She does however give suggestions for a gentle cleansing that’s also a good way to introduce yourself to the resident house spirits.

One Twitter respondent said they’d put out “bread w/milk and honey(at night) to entice a good spirit to move in.” Another respondent noted that “I made my own Sheela Na Gig to ward off evil spirits. Clay vulvas are certainly an experience!”

According to Richard Webster, the housewarming wasn’t just the chance to show off a house. It was a ritual that involved the house spirits. When people moved house, they’d take embers from the old hearth to start a fire in a new hearth. This meant they took their spirits with them to the new house (2008: 136).

Not all house spirits were particularly helpful. In some legends, we have the brownie (aka the hob in northern England). These creatures might leave your kitchen in disarray if you’d left it neat and tidy. If you leave it in chaos, they’ll straighten everything up for you. Personally, I can’t see the problem with the latter, but for some, brownies were hard work to have around. You could persuade them to leave by giving them a gift of clothing.

Yet Donald Archie MacDonald also notes the existence of a Scottish story type around ‘moving house’. The story is categorised as ‘F30’, in which a farmer moves house to escape a brownie, only to find it sitting in the back of the cart (1994/5: 47). Other versions exist, in which families seek to escape glaistigs, bocans, and other supernatural creatures. In these stories, the creature either arrives at the new house before them or travels with them.

This certainly contrasts with those rituals that ensure the house spirits go with you. It also attests to the variety in tales associated with house spirits.

And of course, there’s the idea of the house itself as a defined space, or entity. I liked the Twitter response that said, “Lots of cleansing & lots of talking to the house. I narrate things to my house a lot, especially in the beginning when I’m getting to know a new space & establishing that sense of trust & safety with my surroundings. So I’d say stuff like “Alright, I’m going to sweep the floors!”” Here, the respondent forms a dialogue with the house while they clean as part of the ‘settling in’ period.

So how do you choose where to buy a new house? William Carroll suggests a rule of thumb: “When you hear the call of the first turtledove of spring, the direction from which the sound comes will be the direction in which you will move” (1998: 290).

As for selling houses, there are traditions you can follow for that, too. One of my Twitter respondents said, “I buried a statue of Saint Joseph so he would help my old house sell, but I forgot to dig him up again when we moved”.

Other traditions among the Twitter responses were harder to quantify. One person said they were always too stressed to worry about superstitions, but they did have a tradition of a “chippy tea” in the new house on the first night. A mighty fine tradition, indeed!

Another reply said, “The only thing I’ve ever done is to butter the cats’ paws. It’s supposed to help them know that the new house is ‘home’ because it makes them lick their paws and a cleaning place is a safe place.” Another person replied to say they’d done the same thing.

Someone else said, “I don’t know if this tradition reaches outside of my family, but my grandmother always said the first thing you should do when you move is make your bed, so I have always done that when I moved.” I can see the logic of that tradition, since climbing into a welcoming bed after a long day of moving boxes and furniture would certainly be preferable!

Another respondent replied to say they’d found a pound coin pushed into a slit in a cork in a cupboard. For some, this was a homemade talisman, meant to bestow luck and prosperity on whomever the bottle of champagne was opened for. Others think this tradition brought good luck to everyone who was there. In another version, pushing silver coins into a champagne cork was a wedding day memento for the couple.

Finding such an item is no bad thing! As Daniels says, you should also leave money behind in the house you’re leaving. It can be as little as a penny, since it brings good luck to whoever comes after you, and deters bad luck for yourself (2003 [1903]: 477).

You might encounter other items left behind by previous occupants. One Twitter respondent said, “I moved into a flat that had conkers on every windowsill. I lived in fear of whatever demons it was that they were warding off. Turned out it was against spiders. Binned the conkers.” We talked about the conker practice last year among autumn superstitions.

What do we make of these moving house superstitions?

It’s hardly surprising that people would devise rituals and traditions around moving house. Stressful occasions can lead people to look for ways to find some element of control over what’s happening.

But our homes are also our primary source of shelter. It’s understandable that we’d want to find ways to befriend them and ensure good luck while we live in them.

What traditions did you follow when you moved house?

Daniels, Cora Linn and Charles McClellan Stevens (2003 [1903]), Encyclopædia of Superstitions, Folklore, and the Occult Sciences of the World, Vol. 1, Honolulu, University Press of the Pacific.