The Newcastle Castle occupies a strange position in the city centre. So strange that some people can’t believe we have a castle in town at all!

Buildings have stood on the site for centuries, dating back to the Romans and their Pons Aelius fort. But the Newcastle Castle was originally founded in 1080 by Robert Curthose, the eldest son of William the Conqueror. 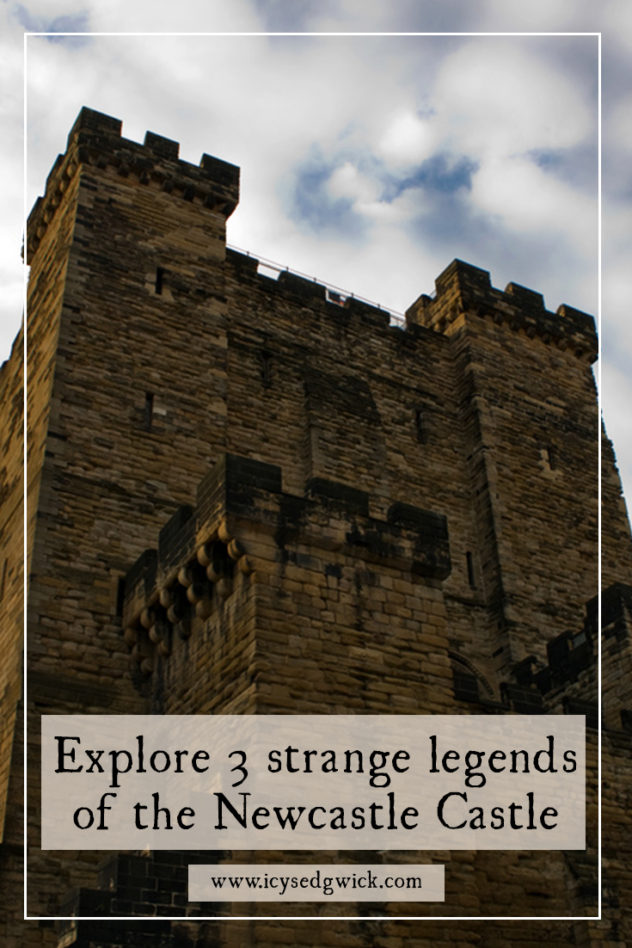 Castles were built from wood in his day, and the castle was rebuilt in stone between 1168 and 1178. It has been a castle, a prison, a beer cellar and Civil War stronghold.

One of its more unusual features is its well. Not so odd, you might think. But what makes it strange is it location on the second floor. The well is some 100ft deep, making it incredibly difficult to poison the water supply.

It also meant you could hold the upper floors even if an enemy invaded the lower floors. Pretty handy engineering.

But as with any English castle, stories both sad and strange abound within the Newcastle Castle. Let’s look at 3 of the latter!

Head up to the second floor and the Great Hall. A flight of stairs heads upwards towards a wide window. But turn left and hop up a few steps.

Follow the short narrow corridor and you’ll find yourself in a small, narrow room. Dark red, brownish stains pepper the wall, giving this room its name of the Blood-Stained Chamber.

No one is entirely sure if these stains are in fact blood, or rather deposits of iron, giving the stone its rusty look.

Could the stains simply be traces of iron in the sandstone? Possible. But the hard edges of the stains look more like splashes. Blood, perhaps?

Who knows? But given the Castle’s position during the Civil War, and also on the frontier with Scotland, it’s possible the room once held prisoners. There aren’t any records to explain the stains, but are you likely to keep a note of anyone you might have murdered?

Some suggest the room was used as a powder store, even though it’s only accessible from the Great Hall. So why does it have its own latrine?

Others think the room provided lodgings for the servants of visiting officials. It’s possible. But why does it have massive holes in the walls outside? Why would you need to use such thick bars on the doors of a servant’s room?

You can make up your own mind about what the stains are!

2. The Keep as a Notorious Prison

Seen in the eerie twilight of winter, it’s not hard to imagine the Newcastle Castle as a prison. And from 1400 until 1812, it was exactly that.

The original Castle Hall stood on the site now occupied by the Vermont Hotel. After sentencing, prisoners were walked across the yard and thrown in the Guardroom on the ground floor of the Castle.

Over the years, the Guardroom has also been called the Garrison Room, and now the Cellar.

We can only guess at the conditions. Reformer John Howard visited the Castle in 1777 and condemned the authorities for allowing them. After all, legend has it that the room was cold, dark, filthy – and crowded. Vicious criminals rubbed shoulders with otherwise decent debtors.

Men and women were kept in the same space. Even worse, the prison was sometimes opened for a 6d admission fee so locals could see selected prisoners.

But we’re going to head back to 1527 for our next legend – that of a prison break.

The Scottish Sir William Lisle and his son Humphrey fled to Newcastle to escape the wrath of the Regent, Angus. Instead, the Lisles were thrown into the Castle.

According to Pamela Armstrong’s Dark Tales of Old Newcastle, they overcame their guards, freed other prisoners, and caused absolute mayhem. In the chaos, they slipped away, leaving the Newcastle Castle behind.

Their triumph was short-lived. Sir William joined the Border reivers for two years. In 1529, a raid went wrong and he ended up back in the Castle. They didn’t take any chances and they hung him immediately.

3. The Donkey and the Roof

Lots of the stories around the Newcastle Castle have gotten garbled over time. And a lot of the ghost stories in particular can’t be verified.

But there’s one story that is most definitely true – and it’s the weirdest of them all!

Let’s head back to 7 December 1733. We’ve seen adverts proclaiming an amazing spectacle is about to take place. A man will fly from the roof of the Keep!

So we’ve gathered in the grounds at the foot of the Castle. Bear in mind the parking spaces and cars wouldn’t have been there!

A figure with manmade wings appears at the top of the 100ft tower. It launches into the air! IS he going to fly after all?

Gasps of astonishment turn to screams as the figure plummets into the crowd below.

Only it’s not the showman. It’s his donkey.

Miraculously, the donkey survives the showman’s “test flight”. The spectator it lands on isn’t so fortunate.

The showman has had second thoughts, realising he’s never tested his wings. Instead he straps his wings to the donkey, and pushes it off the roof.

He never does make his advertised flight.

Unlike a lot of the tales surrounding the Castle, the records of this legend exist in the archives of the Evening Chronicle. So we know it really happened!

But the Newcastle Castle is a true monument to the stories of a region. It’s seen around 850 years of history. If its walls could talk, imagine the tales it would tell!

Will you explore the legends of the Newcastle Castle?

Thanks to the Covid-19 pandemic, Newcastle Castle is open from 10am until 5pm from Friday until Monday. Book your tickets online to get your time slot and start your investigation into the Castle’s history in the museum!