If you’re anything like me, the name ‘parsley’ makes you think of ‘parsley, sage, rosemary, and thyme’ from Scarborough Fair. 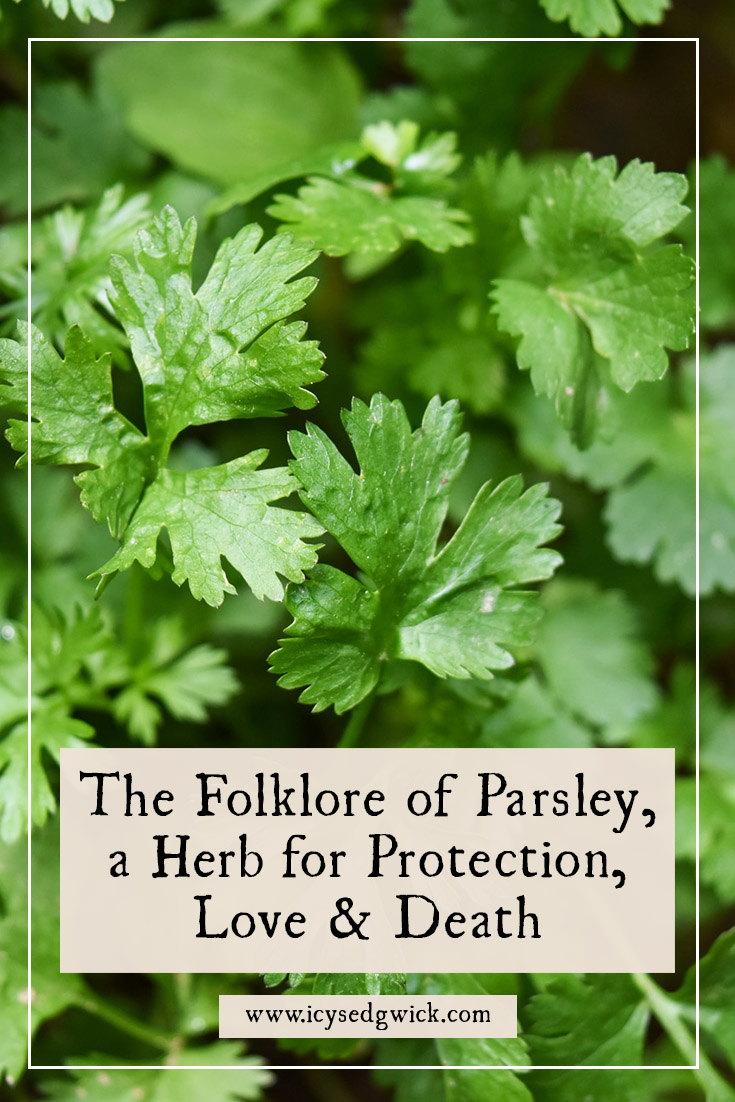 Parsley is part of the Apiaceae family and comes from the eastern and central Mediterranean area. It’s a good source of vitamins A, C, and K, along with magnesium, potassium, iron, folate, and calcium (Enloe 2019).

It’s also very easy to add to your diet. You’ll recognise it as a garnish, but you can also add it to salads, pesto, pizza, bread, and soup.

But this is a folklore blog, not a health one. Parsley also has magical uses, beyond being a source of goodness. Nicholas Culpeper associated parsley with Mercury (Harrington 2020: 94).

So how does parsley appear in magic and folklore? Let’s find out! Keep reading, or hit ‘play’ below to hear this blog post as a podcast episode.

Parsley in Ancient Greece and Rome

Records of the use of parsley date back to ancient Greece and Rome. Hardly surprising given its origins in the Mediterranean. Both the Greeks and Romans associated it with death (Baker 2011 [1969]: 118). Greeks decorated tombs with parsley since it stayed green for so long after cutting it. It was supposed to come from the blood of Archemorus.

Archemorus was the son of Lycurgus and Eurydice. His real name was Opheltes. Archemorus meant ‘Forerunner of Death’. According to the myth, the seven heroes were heading to Thebes to retake the city from the tyrannical rule of Eteocles. They stopped at Nemea, and Opheltes’ nurse left him to his own devices while she showed the Seven the route they should take. When she returned, she found a serpent had killed the child. The Seven buried him and defeated the serpent, and one of the heroes, Amphiaraus, saw this as a bad omen. They renamed Opheltes as Archemorus and set up the Nemean Games in his honour.

Others think the Nemean Games were held for Zeus, much like the Olympic Games, while others say Heracles began them after he beat the Nemean lion. The Nemean Games were held every two years at Nemea. Originally, only warriors could take part, but eventually, they opened up to all Greeks. They included horse-racing, wrestling, boxing, archery, chariot racing, and even music contests.

Other sources say the plant was dedicated to Persephone through her role as Queen of the Underworld. The Greeks held the Nemean Games to commemorate any deaths of important people. They used parsley wreaths to crown the winners (Inkwright 2020: 124).

Other writers say they used olive branches or celery as wreaths. These links between parsley and the dead still appear in modern witchcraft. Parsley is recommended as the herb of choice if you want to communicate with the dead.

The Folklore of Growing This Awkward Plant

Parsley is infamous for its difficulty in germination. One folklore belief directed people to pour boiling water over the ground before planting to ward off the Devil (Baker 2011 [1969]: 118).

Growers were also directed to plant between 12 and 3 on Good Friday. This was the period of the day in which the Devil had no influence. Parsley was believed to take a journey down to Hell, and that’s why it takes too long to germinate. Planting in this three-hour window means parsley doesn’t need to make this journey (Baker 2011 [1969]: 118).

Others note that parsley is growing down towards Persephone, not the Devil. In Shropshire, growers believed you needed to sow parsley nine times. That’s because the Devil took all the seeds but the last (Inkwright 2020: 124). Parsley was only believed to grow “for the wicked”, though other folklore notes it would only grow for bachelors or “hen-pecked husbands” (Baker 2011 [1969]: 118).

It couldn’t be hand sown in Maryland or Louisiana, with growers blowing the seeds onto the prepared beds from either a gatepost or the Bible. In Texas, growers scattered the seeds on the kitchen floor. Then they swept it out onto the garden from there (Baker 2011 [1969]: 118).

If planting was difficult enough, then transplanting was downright dangerous. Trying to transplant parsley was even believed to cause deaths in the family. Some suggested you could only do so safely on Good Friday.

Even cutting the plant could be dangerous. Cutting it while in love would kill your sweetheart. If you picked parsley while saying a person’s name, they would die within seven days (Baker 2011 [1969]: 118). One superstition noted that if you spotted parsley growing in your garden, it foretold a death before the year’s end (Terravara 2021).

Despite its links with death, parsley also packs a powerful protective punch. It’s not immediately clear why, though the Romans apparently used it to protect their food from contamination. Perhaps this explains its use as a protective herb.

If you kept your livestock in barns, you could stuff parsley into the cracks in the walls to protect your animals (Harrington 2020: 95).

In the south of France, you could make a tea from the leaves and holy water to undo a curse (Harrington 2020: 95).

Carrying parsley helped to ward off evil, either as sprigs of the fresh herb or pinches of the dried herb. You could also put pinches of dried parsley at your doors and windows to protect your home (Harrington 2020: 95).

This act ultimately places the protection across the ‘entry points’ of the home. They’re also what is known as ‘liminal’ places because they mark the point between inside and outside. This liminal quality links nicely with Mercury, the god who could travel between the divine, mortal, and deathly realms.

Despite its associations with death, parsley also had associations with sex and fertility. People drank parsley wine as an aphrodisiac. If you planted parsley in Lincolnshire, you’d become pregnant before it germinated. Another belief suggested babies were found among parsley, rather than a cabbage patch or the gooseberries.

In Germany, people wore parsley to keep their partner faithful. The dried form of the plant was a popular ingredient in any spells you worked for your relationship. There was also a simple charm you could make to ensure your partner didn’t stray. Draw your initials entwined with theirs on a small piece of paper. Put the paper with a pinch of parsley in a pouch. Then put the pouch into your partner’s coat pocket or bag (Harrington 2020: 95).

One simple spell involves mixing dried parsley with jasmine and putting it in your shoe. This will apparently make you more attractive to others (The Thrifty Witch 2022).

There is a theory that the refrain in the song ‘Scarborough Fair’ that inspired this post is in itself a work of love magic. The bouquet contains parsley, sage, rosemary, and thyme.

One translation of this suggests these meanings of the bouquet:

Parsley: I want to have babies with you.
Sage: I’m dependable.
Rosemary: Remember me.
Thyme: I’m yours.

Well, it’s one way to send a message. And as we saw with the Victorian Language of Flowers, plant symbolism can be combined within a bouquet to send more sophisticated messages.

There’s also an old Italian tale, named ‘Petrosinella’, which involves parsley. In the Italian version from the 17th century, a pregnant woman spots a patch of parsley in her neighbour’s garden. She gets a craving for it, and steals some of the herb, despite the fact the garden belongs to an ogress.

The mother keeps stealing, and the ogress keeps getting annoyed that someone is stealing her herbs. Eventually, she catches her in the act. The pregnant woman promises to hand over the baby to stop the ogress from killing her. The woman does no such thing, and the baby grows up to be a beautiful young woman.

The ogress keeps pestering her to remind her mother of the promise she made. Eventually, the mother snaps “Well go on then!” The ogress seizes Petrosinella and locks her in a tower in the woods. It has no door or stairs, only a single window. The ogress makes Petrosinella drop down her hair if she wants to climb up to the window.

One day, the prince spots her at the window and falls in love. Eventually, the ogress finds out about their trysts, and the pair have to flee. Petrosinella manages to defeat the ogress and gets her happy ever after with the prince. If you recognise the story, that’s because it went on to inspire Rapunzel! While Rapunzel focuses on the hair, Petrosinella retains the importance of the plant. Not only is petrosinella an old word for parsley, but the girl also has a parsley-shaped birthmark on her chest.

What Do You Make of Parsley?

Parsley is a wonderful herb! You could also use a infusion of the leaves to prevent hair lice. Parsley poultices are good for insect bites. Chewing the leaves also helps to freshen the breath (The Witchipedian 2019).

Or you can try out some of the uses for dried herbs. They’re easy enough to add to pouches for easy carrying, and you can always pop some under a doormat!

I’m not a herbalist so I wouldn’t recommend ingesting any herbal preparations until you know they’re safe for you, based on whether you’re pregnant, or you’re taking any medication. If you’d love to learn about herbalism, then check out Rowan and Sage, and learn from one of the best and most accessible practitioners I’ve certainly come across. The Kitchen Herbalism course is a great place to start. Click here!

But let me know your associations with this fabulous plant below! Have you tried growing it? Or do you know any other superstitions?