Rosemary is perhaps one of the most instantly recognisable scents among culinary herbs. It makes roast potatoes taste amazing, and I’ve always found its scent helpful when I need to concentrate.

There’s also a lot of folklore associated with this plant. 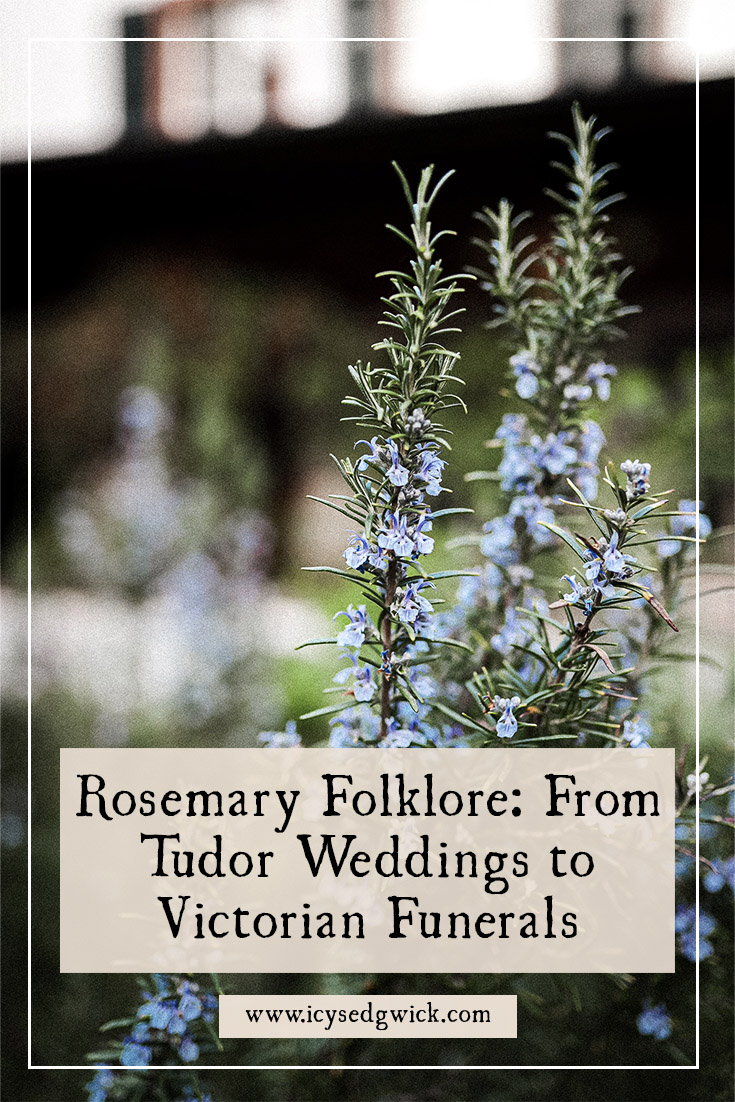 Its evergreen nature perhaps explains why rosemary was once used alongside holly as a Christmas decoration (Binney 2018: 89). People spread it on their floor at Christmas during the Middle Ages. This meant it released its scent whenever anyone walked on it (Dietz 2020: 191).

But what else does this fabulous plant have up its sleeve? Why was it used in Tudor weddings and Victorian funerals? Let’s find out!

Rosemary has blue flowers, but these were apparently once white. During the Flight into Egypt, Mary spread either Christ’s clothes or her own cloak over the bush to dry. After doing this, the flowers turned blue (Baker 2011 [1969]: 132). In keeping with its Christian theme the plant was said to bloom at midnight on Old Christmas Eve, or Twelfth Night (Baker 2011 [1969]: 132). If you smell the scent of rosemary on Christmas Eve, you’ll have good luck during the coming year (Dietz 2020: 191).

It’s probably hardly surprising that rosemary has a range of beliefs about its protective nature. Planting rosemary near the front door helped keep evil out of the house (Baker 2011 [1969]: 132). You could also grow your own rosemary, dry it, and hang it by the door post to deter thieves (Inkwright 2020: 133). Planting rosemary on either side of the door would repel witches (Dietz 2020: 191).

If you feel your home is plagued by a bad atmosphere or a streak of bad luck, do a smoke cleanse using rosemary (Harrington 2020: 111). Rosemary could also be used to ward off fairies, poltergeists, and spirits (Harrington 2020: 110). An Irish belief meant hanging rosemary over a cradle stopped fairies from swapping a baby with a changeling (Inkwright 2020: 133). That said, rosemary was dedicated to the fairies in Portugal, and used in Spain to ward off the Evil Eye (Baker 2011 [1969]: 133).

Drinking from a rosemary spoon protected you from poisoning. Keeping a sprig of rosemary under your bed kept bad dreams away (Baker 2011 [1969]: 133). Alternatively, make a small sachet from blue fabric and fill it with rosemary. Pop it under your pillow to ward off nightmares (Harrington 2020: 110).

You could even make a box from the wood and smell it every day to enjoy eternal youth (Baker 2011 [1969]: 133). Or you could also restore the vitality of youth with a decoction of pounded rosemary leaves (Daniels, 2003 [1903]: 840). Such was the power of this plant that you could cleanse other dried herbs of any negativity simply by storing them beside rosemary! (Inkwright 2020: 133)

Remember, if you want to learn more about how protective measures show up in folklore, you can pick up my ebook all about it at the bottom of this post!

Rosemary sometimes appears in the recipe for Four Thieves Vinegar. This first appeared in Marseille, where four grave robbers plundered graves during a plague outbreak. When caught, they claimed they’d used a special potion to protect them against contracting the disease (Laws 2016).

There is an alternative version that sees the thieves invent the vinegar after being sentenced to bury plague corpses (Our Herb Garden 2008 – 2022). Either way, the intention is the same: to use the potion to stave off the plague.

If you’re interested, their mixture contained lavender, rosemary, distilled vinegar, and cloves. Such a mixture is often called Four Thieves Vinegar. Other recipes say it contained garlic, wormwood or sage.

Christina Oakley Harrington notes rosemary also signified rulership (2020: 108). This partially explains its use in wedding ceremonies, since the husband expected to rule over his wife. That said, the belief rosemary will only grow near a house ruled by a woman complicates things (Harrington 2020: 109).

Harrington suggests a remedy if you feel you’re in a role that requires authority, but you’re not getting the respect you need. Someone should give you a bunch of rosemary tied with red and purple ribbons. this would confer the authority you needed (Harrington 2020: 110).

It apparently grew better in households run by women, “where the grey mare is the better horse” (Baker 2011 [1969]: 133). That said, in Buckinghamshire, people believed that rosemary would thrive or die back depending on the fortunes of the master’s business (Daniels 2003 [1903]: 841).

Rosemary was said to ensure success in love. It’s believed rosemary would help the bridal couple remember their marriage vows (Dietz 2020: 191). In the Middle Ages, newlyweds would plant a branch from a main bush. If it didn’t thrive, it meant a bad omen for the new family (Dietz 2020: 191).

Tudor brides dipped rosemary into scented water and then wove it into their bridal wreaths. Anne of Cleves did so, and boys carrying a silver-gilt cup filled with sprigs escorted her to her wedding (Baker 2011 [1969]: 132). This didn’t exactly guarantee her wedded bliss, since Henry VIII divorced Anne just six months later.

People continued to carry rosemary in bridal bouquets until the Victorian era. Bridesmaids even gave rosemary to the groom to enhance his married happiness (Baker 2011 [1969]: 132).

People commonly used the leaves as stuffing in poppets to attract a lover (Dietz 2020: 191). Indeed, there was also a belief you would fall in love if someone touched you on the finger with rosemary (Dietz 2020: 191).

Despite the link with weddings, rosemary also made an appearance at funerals. Being evergreen, it represented immortality. Its links with scent and memory meant it also represented remembrance (Baker 2011 [1969]: 132). If you cut a branch off a rosemary plant and stuck it into a grave, the original plant would wither once the branch rotted (Daniels, 2003 [1903]: 840).

People placed rosemary into the corpse’s hands while mourners carried sprigs until the early 20th century. The mourners then cast these sprigs into the grave (Baker 2011 [1969]: 132). The scent of rosemary was apparently welcome at funerals to mask the scent of the corpse (Daniels, 2003 [1903]: 840).

You can always show your respect by wearing a rosemary sprig to a funeral or memorial service now (Harrington 2020: 110). If you have an ancestor practice, you might add a sprig of rosemary to your altar for those ancestors you remember.

People also once stirred the christening cup with rosemary, making it one of the few plants to appear at christenings, marriages, and funerals (Daniels, 2003 [1903]: 841).

Single and want to know which person you’ll end up with? Head to a churchyard near midnight on Midsummer Eve. At the stroke of 12, run around the church scattering rose leaves and rosemary. Chant “Rose leaves, rose leaves, rose leaves I strew, He that will love me, come after me now.” (Simpson 2003: 239). You should see a vision of your intended—though that might give you a fright in a dark churchyard.

You could also set a dish of flour under a rosemary bush on Midsummer’s Eve. If you retrieved it the following day, you’d find your future partner’s initials written in the flour (Baker 2011 [1969]: 133).

There was a somewhat involved method to ensure prophetic dreams using rosemary. You needed three women under 21 to gather on St Magdalene’s Eve, or July 21. The girls needed to go to an upstairs room in a house, usually a bedroom. Once there, they should mix wine, gin, rum, and vinegar in a jar made from ground glass. Each girl would dip a sprig of rosemary into the mixture, which they pinned to their dress. Then each girl would take three sips of the mixture. All three should then sleep in the same bed, and their dreams would be prophetic (Harrington 2020: 109).

You can also use rosemary to remember old friendships (Harrington 2020: 110).

Sir Thomas More apparently allowed the plant to grow all over his garden “because it is the herb sacred to remembrance, and therefore to friendship” (Binney 2018: 89). In terms of remembrance, Ruth Binney relates speculation that its scent lingers, and smells evoke memories, creating the association (2018: 90).

In ancient Greece, students put rosemary behind their ears or in their hair to aid concentration during exams (Dietz 2020: 191).

In its way, rosemary has become a popular and somewhat flexible herb to keep in your collection.

To demonstrate just how flexible, in the 1920s, rosemary became a popular remedy for baldness. One preparation included rosemary, paraffin oil, white wax, rum, beef marrow, and castor oil. You’d rub this onto the hair for about 15 minutes. Another remedy involved spirit of rosemary, oil of sesame, oil of lemon, ammonia, and chloroform (Binney 2018: 112).

It goes to show how whether you’re trying to banish evil, boost your appearance, find love, or remember the departed, you can essentially use the same herb for all of them.

And if nothing else, it smells fabulous.

And if you do want to use it in lotions and potions, then you can learn herbalism for yourself! You can do so with the excellent Rowan + Sage! The Kitchen Herbalism course is a great place to start. Click here!

What do you use rosemary for? Let me know in the comments!

Daniels, Cora Linn and Charles McClellan Stevens (2003 [1903]), Encyclopædia of Superstitions, Folklore, and the Occult Sciences of the World, Vol. 2, Honolulu, University Press of the Pacific.