Theatres attract tales of ghosts and hauntings like few other types of building. The Theatre Royal in Drury Lane is no exception. 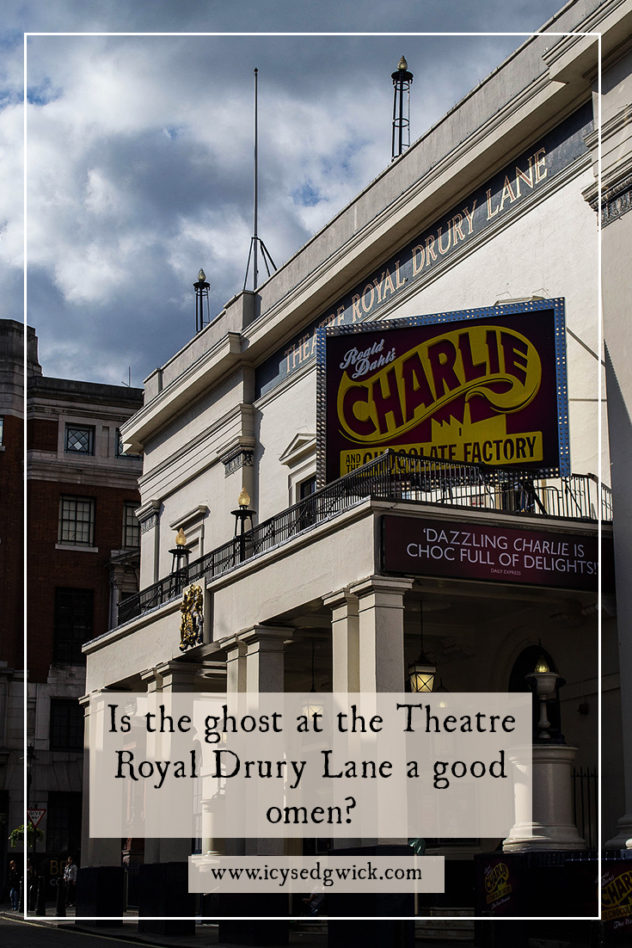 The current Theatre Royal in Covent Garden dates to 1812. It’s actually the fourth incarnation on the site since 1663. You can even find 18th-century foundations below ground level.

The third incarnation of the theatre burned down in 1809. It was most notorious for being the location of a failed assassination attempt. Would-be assassin James Hadfield tried to murder King George III there in 1800. He fired shots from the pit but, being jostled, missed on all counts. The King calmly ordered the play to continue once Hadfield was arrested!

But the stories of resident ghosts have passed into local theatre legend. The tale of the Man in Grey is perhaps the most oft-repeated story. So let’s take a walk into London’s cultural scene and find out who he is…

The Man in Grey

Perhaps the most famous of the ghosts at the Theatre Royal is the so-called Man in Grey. He makes something of a change from the usual Grey Lady ghosts featured in British theatres.

According to the legend, actors only see him between 10 am and 6 pm. He wears a tricorn hat, a powdered wig, a long grey riding cloak, and riding boots (Simpson and Westwood 2005: 464). He sits in the same seat in the Upper Circle at the end of the fourth row. Then he strides along the walkway behind the seats. When he reaches a particular spot on the wall near the royal box, he melts away and disappears.

So far, so spectral. The fact he sits in the same spot and disappears in the same area suggests this is a ghost replaying an incident. It also suggests routine, that our Man in Grey was a man of habit. This may give us some clues…though we’ll get to those in a moment.

What stands out about the Man in Grey is that he’s not a phantom that inspires fear and dread. Quite the opposite, in fact.

Whenever the Man in Grey appears at a matinee performance or rehearsal, the play goes on to be a success. According to the legends, he endorsed The King and I, South Pacific and Oklahoma, among others. He even appeared at Miss Saigon every time the cast changed (Jones, n.d.). All of the productions were box office hits.

Does this make him a good omen for the Theatre Royal? Possibly.

No one has been able to uncover a specific name for him, which is a shame. The folk tales around him claim that he was a wealthy gentleman in the early 18th century. Embroiled in a passionate affair with an actress, he met her in the – you guessed it – Upper Circle after performances.

One night, a rival lay in wait for him. Instead of greeting his sweetheart, the Man in Grey encountered his murderer. The rival stabbed the gentleman in the chest and hid his body in a wall recess at the back of the Upper Circle. The murderer later walled up the alcove (Simpson and Westwood 2005: 464).

Surprisingly, a refurbishment of the theatre in 1848 revealed a wall cavity in the Upper Circle. It contained a skeleton with a knife in its ribs. Could this be our mysterious Man in Grey? It is possible, after all. Yet others wonder if the legend has thus emerged backwards, extrapolated from the body found in the wall.

Is the legend true?

I found it difficult to find any direct records of eyewitness accounts. Most of the online sources just say that people have seen this or that ghost. The Man in Grey also reportedly told ushers to shush as recently as 2012, though no names were given (London Paranormal, n.d.).

According to the Bradford Observer, King George VI visited the theatre in November 1939 to meet the N.A.A.F.I. players who were leaving to entertain troops in France. A theatre employee told the King about the Man in Grey, explaining he’d been last seen “last March” (Yorkshire Observer 1939). Again, it’s not clear who saw the Man in Grey, or during which performance.

But I did find an article in the Sunday Mirror from 5 February 1939 that mentions spooky activity in the Theatre Royal. Actress Doreen Austin explained that;

I have never seen the ghost but once during rehearsals when the principal girl, Greta Fayne, and I had stayed later than the others to go through a tap-dance routine, the girl who was coaching us suddenly stopped and said: “Who is that sitting in the stalls?” We all looked, but there was nobody there at all.”

The Man in Grey prefers sitting in the Upper Circle, but maybe he wanted a better view this time.

Other ghosts at the Theatre Royal

The Man in Grey isn’t the only resident spectre. Actor Charles Macklin also apparently haunts the theatre. In 1735, he argued with his fellow actor Thomas Hallam about a wig. He lashed out with his cane, piercing Hallam’s left eye, killing him. According to theatre lore, Macklin’s ghost wanders in the corridor where the killing happened.

Other reports involve tugged trouser legs, people hearing their name called, swing doors moving of their own accord, or hearing sharp intakes of breath in empty rooms. One actor reported the channel changing on his dressing room TV whenever he and a colleague talked about the theatre ghosts (Dickson 2015).

Performer Joseph Grimaldi also haunts several parts of the theatre. Actors, ushers, and cleaners report mischievous kicks while they go about their business.

A disembodied white face has been seen around the theatre. It’s particularly seen in the boxes. Grimaldi asked for his head to be decapitated before burial, which might explain the bizarre apparition.

Many actors believe Grimaldi nudges performers around the stage to improve their position. That said, he’s not averse to giving them a kick if they’re not putting in enough effort. He even pats them on the back when they get laughs.

Other reports involve tugged trouser legs, people hearing their name called, swing doors moving of their own accord, or hearing sharp intakes of breath in empty rooms.

Dan Leno, another clown, often portrayed pantomime dames at the theatre. He suffered from incontinence and hid the smell with lavender perfume. He died aged 43 in 1904, but the scent of lavender apparently still hangs around the theatre.

Leno was also famous for his clog dancing routine. People have reported the sound of rhythmic drumming inside his former dressing room (Jones, n.d.). Is he still rehearsing even now?

What’s fascinating about Grimaldi’s appearance at the theatre is the fact he was the resident clown at the second Theatre Royal. This one was demolished in 1791, replaced with a larger theatre that reopened in 1794.

Dan Leno and the Man in Grey date to the current incarnation of the Theatre Royal, though if Grimaldi does haunt the building, he’s obviously very attached to the site.

But why do theatres attract so many ghosts?

Given the number of people who die in hospitals, you might expect hospitals to be more haunted than theatres.

But theatres around the country boast far more tales of phantoms and spectres. Many of the ghosts remain, even when the theatres disappear. The Royal Strand Theatre originally stood on the site now occupied by the disused Aldwych tube station in London. A ghostly actress still wanders the tracks, bothering the maintenance men. Victorian actor William Terriss was murdered at the stage door of the Adelphi Theatre in 1897. He’s been seen wandering around in the Covent Garden tube station, and also knocking on dressing room doors in the theatre.

Could it be the vast range of emotions played out on the stage? Are actors simply more susceptible to presences from the other side? Or do lonely ghosts return to the spaces where they were at their happiest? Aoife Monks suggests that the actors who see these ghosts perhaps do so as a way to connect to their theatrical heritage. Seeing one of these legendary ghosts may help them feel like they’ve joined the acting family (Dickson 2015).

Let me know what you think! Is your local theatre haunted?

And if you enjoyed this post, sign up below to get more folklore in your inbox every week.

Dickson, Andrew (2015), ‘Inside the world’s most haunted theatre’, The Guardian, https://www.theguardian.com/stage/2015/oct/29/most-haunted-theatre-ghosts-superstitions-theatre-royal-drury-lane.

Simpson, Jacqueline and Westwood, Jennifer (2005), The Lore of the Land: A Guide to England’s Legends, London: Penguin.